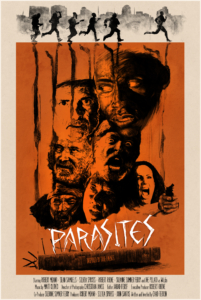 Parasites is about a group of 3 friends who take a wrong turn in a seedy section of Los Angeles and encounter an angry and violent gang of homeless vagrants. It becomes a bloody and gritty fight for survival as one of the friends escapes and attempts to outrun the roving gang and their leader.

Parasites starts out strong and strikes a familiar chord as it feels like a cross between Wrong Turn and Escape From New York, minus the hillbillies and futuristic world and swapping the backwoods for the concrete jungle. The filmmakers did an excellent job of making the worst parts of a modern city look like a lawless nightmare and backing it with a Carpenter-esque score that gave it an extra flare of credibility with this horror fan.

The violent, rag tag group of filthy street dwellers with chains and shovels and rusty knives for weapons are dressed in shoddy clothing and have a group-think mentality like a group of blood thirsty zombies. They have their lifestyle and their inner group rankings and seek out the escaped trespasser with a crazed dedication. It’s a well-realized vision for the group that injects extra grit and fear into the story.

Robert Miano as Wilco, the leader of the gang, plays his role with the perfect mix of subtle craziness and unhinged anger. The character could have easily been cartoonish and laughable but Miano owns the role with an assured mad glint in his eye and complete believability. Sean Samuels is also very strong in his role as Marshall Colter, the lone friend on the run from the homeless gang. Some interesting and unique characters pop up throughout the film, most notably is Silvia Spross as Mona, a prostitute living on the streets.

The film is visually impressive and we’ll acted with an intriguing yet simple set up. The biggest issue with ‘Parasites’ is that it didn’t have enough going on to make it exciting or to hold my attention thoroughly throughout the film. There’s a lot of running and chasing and wandering as music plays that serves as the bulk of the action, but it’s just not very compelling. It feels like a short film puffed up and filled out to feature length. And I’m not saying ‘Parasites’ is a bad film, there just isn’t a lot of meat on the bone here.

And I just have to say, screenwriters have got to come up with something better than, “I have no signal” when addressing why a character can’t just call for help with their cell phone. In the middle of the mountains or woods? Ok, I’ll buy that. But when you’re a few miles away from downtown Los Angeles, it just doesn’t fly.

Parasites is gritty and dirty and mean. It created a nightmare landscape that is hidden in the darkest parts of our big cities and the film shows a lot of promise for writer and director Chad Ferrin. I just wish it had more to it to justify its run time because, although Parasites had some killer, it was mostly filler.

Want a second opinion? Click here to read another review of this film.