Based on a French novel, “Diabolique” tried to heteronormalize its plot, but this famous noir thriller could not get rid of the homosexual undertones. 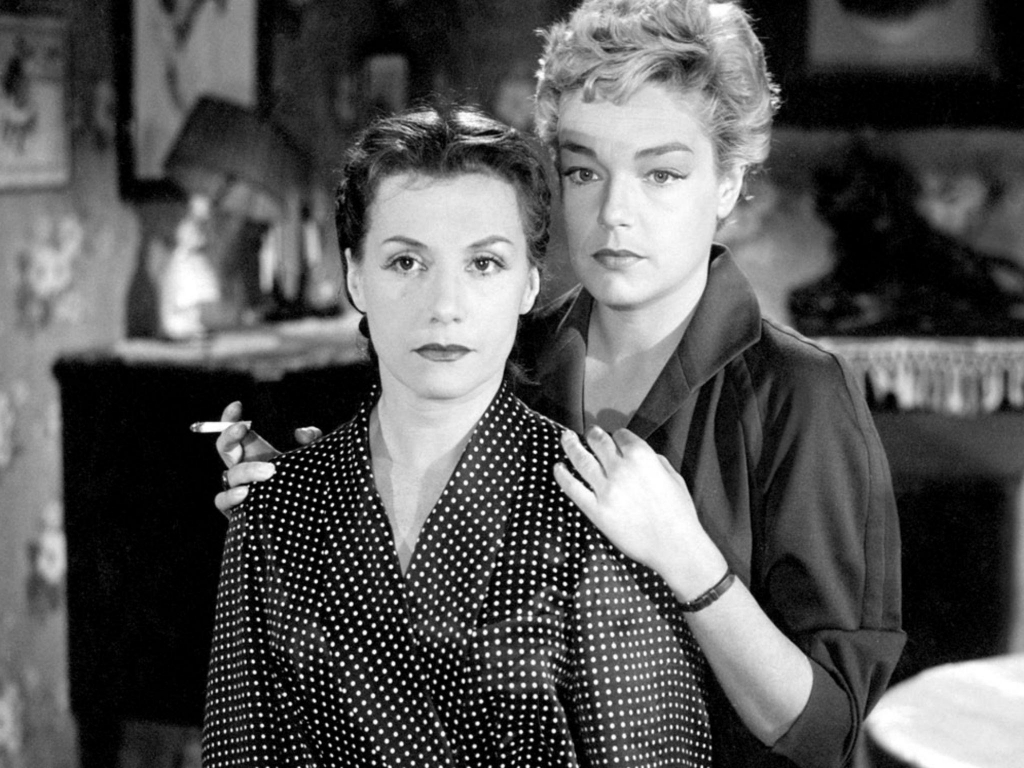 The 1955 French thriller Diabolique (Les diaboliques) is famous for its masterful use of suspense and iconic twist ending, as well as its influence on the master of suspense himself, Alfred Hitchcock. The film also has an interesting queer history that goes all the way back to the 1952 French novel She Who Was No More (Celle qui n’était plus), by Pierre Boileau and Thomas Narcejac, and continued in the 1996 American remake.

Directed by Henri-Georges Clouzot, the original Diabolique is the best and most famous version of the story. Set in a boys boarding school, Christina, the frail and abused wife of the cruel headmaster Michel, and Nicole, his bitter mistress, hatch a plan to murder him. They stage the murder to look like an accident, but things go terribly wrong when Michel’s body disappears and the women begin finding clues that he may still be alive — or that someone has discovered their secret and is taunting them.

The truth is that Michel is indeed alive and that Nicole double-crossed Christina. The real plan was to frighten her until her already weak heart gave out, so the lovers could inherit her money and the school.

In Boileau-Narcejac’s novel, things were slightly different. The husband, Fernand, and his lover Lucienne seemingly murder his wife, Mireille; the ending reveals that Lucienne and Mireille were also lovers, and their plan was to drive Fernand to suicide to collect his life insurance and run away together.

In the 1950s, even for European audiences, the idea of a lesbian relationship would have been taboo. 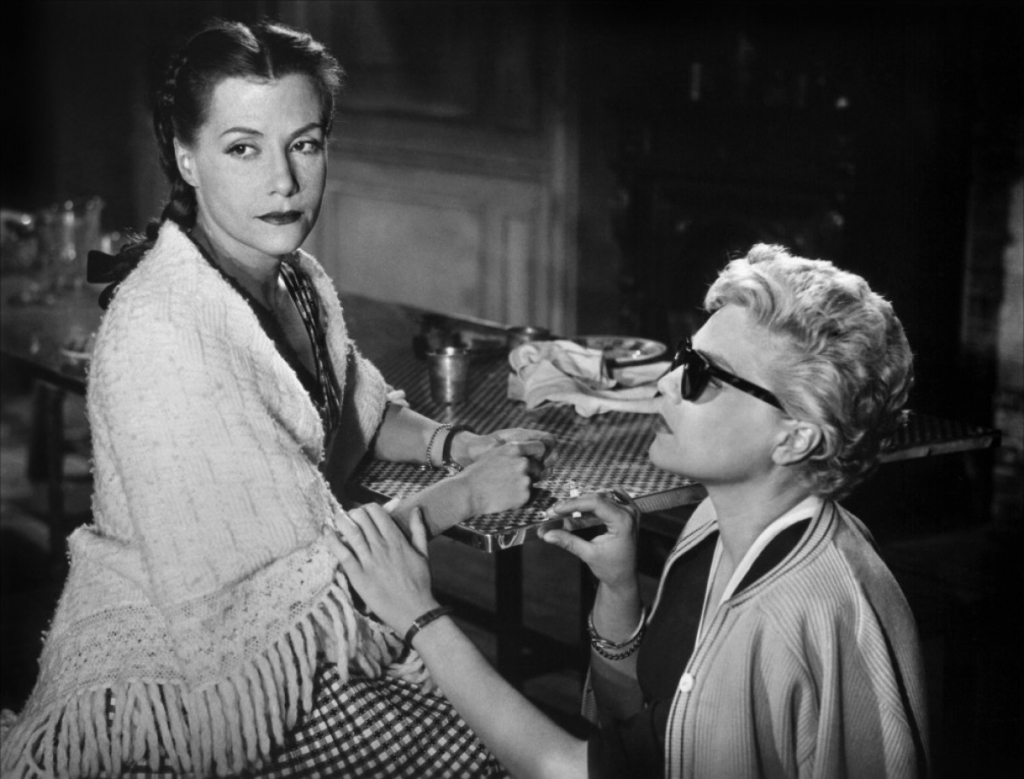 On the surface, it seems like Clouzot’s film straight-washes the original story, but if he was trying to erase any trace of queerness from the narrative, he failed spectacularly. Diabolique is rife with lesbian subtext.

From the very beginning of the film there is an intimacy between Nicole and Christina. Students notice that they are always together, while their fellow teachers remark how strange it is that a wife would comfort her husband’s battered mistress. No one finds it odd that the two women leave for holiday break together to visit Nicole’s home. There they share a bed, and when they return to school, after Michel’s murder, they continue to share a room.

When Michel’s body disappears, guilt and paranoia threatens to tear the two women apart. Nicole suggests they run away together, but Christina decides it’s time for them to part ways. The scene feels remarkably like a breakup. Nicole asks tearfully, “You don’t hate me, do you?” Christina assures her that she doesn’t, wishes her well, and hopes she is able to forget their horrible deed.

Of course, Nicole’s affection for Christina is all an act — or is it?

In She Who Was No More, Lucienne was playing both sides, and it could just as easily have been Mireille whom she drove to suicide instead of her husband. Nicole behaves similarly, perhaps exploiting the affection or attraction that Christina has for her in order to avoid suspicion. 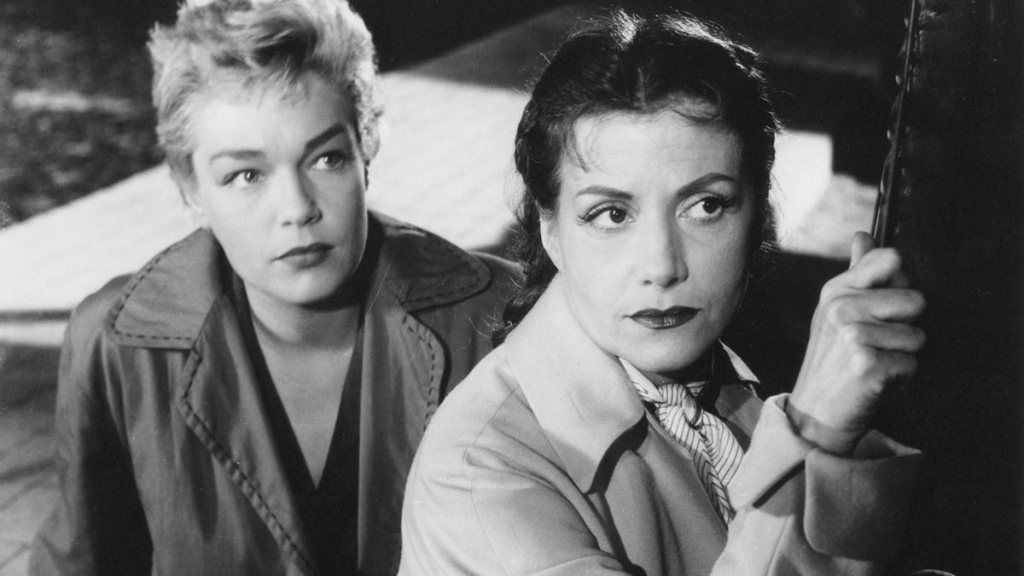 Jeremiah Chechik’s film amps up the eroticism between Nicole and Mia (formerly Christina) in a way that titillates without ever giving us a genuine feeling of connection. However, this Nicole has a change of heart, having grown to truly like — or even love — Mia, and tries to call off the scheme with Mia’s husband, Guy. The two women ultimately kill Guy for real, but Mia can’t forgive Nicole’s betrayal.

The lesbian relationship between the two women at the heart of the original story has progressed from a shocking twist to subtext to text, even if the latter feels hollow. Along with similar films like THE HAUNTING that were made in a time when queerness could only be hinted at, and then remade in the 90s, when bisexuality was used to make women appear modern and sexy, DIABOLIQUE has changed with the times.

The Haunting has received the 21st Century treatment, in which its lesbian character’s sexuality is fully realized and portrayed authentically, free of stereotypes and tired tropes. Hopefully, Diabolique will soon follow suit.

Overall Rating (Out of 5 Butterflies): 4
https://youtu.be/BzbGtjtfZwA