The Fourth Dimension: “From Hell” by Alan Moore

Alan Moore’s modern masterpiece “From Hell” reimagines the infamous Jack the Ripper murders by adding infinitely more depth and pathos to the horror.

ABOUT 'FROM HELL'
FROM HELL is a graphic novel by writer Alan Moore and artist Eddie Campbell, originally published in serial form from 1989 to 1998. The full collection was published in 1999 by Top Shelf Productions. Set during the Whitechapel murders of the late Victorian era, the novel speculates upon the identity and motives of Jack the Ripper. The comic was loosely adapted into a film, released in 2001.

“These ancient stones awaken in me a fearful appetite,” says Sir William Withey Gull, as he disembarks from the horse drawn carriage which serves as his transportation on a tour of Victorian-era London. His words go over the head of his driver Netley, a man of subpar intelligence but with enough cognizance to be a dutiful servant; something Gull very much requires for his current endeavor.

As they travel throughout the city, Gull elucidates the hidden meanings of the surrounding architecture and monuments: the city’s population have no idea they inhabit what is essentially an enormous sacrificial altar. The historical and moral significance of this clearly doesn’t make a dent to Netley. The poorly educated driver is just an excuse for Gull to expound on London’s place in history — both in the legacy it carries from the past as well as the role it will play in shaping the future.

On paper, Gull himself will be known as a brilliant and innovative physician. But our story reveals him as the culprit behind the most infamous of killing sprees: the 1888 Whitechapel murders. With this revelation comes many questions: Why does he commit these murders? What made him turn to killing? And what were the societal effects of all this?

Many probably go into From Hell expecting a true crime story, and that is what they get to some degree. But thinking of it only as that shortchanges its sheer ambition. Moore has a hell of an imagination, and it’s damn fascinating to read his take on a real-life event.

In short, From Hell is much more than just a Jack the Ripper story.

Moore’s influence is all over the reinterpreted Gull.

Here sharing mostly just a name with his real-life counterpart, our doctor is an entirely different beast. Using the framework of Stephen Knight’s Jack the Ripper: The Final Solution for the plot, Gull is presented as a murderer for hire on behalf of the Royal family. The deaths are being carried out as a way to cover up the birth of a bastard child fathered by Prince Albert. However, Gull himself has his own motivation which stems from a fascination since his youth with metaphysics.

“Can history be said to have an architecture?” Gull expounds in one instance. “The notion is most glorious and most horrible.”

Time itself, the fourth dimension, is like an ocean. And if you create just enough waves, history will be influenced in ways no one can anticipate.

This narrative theme is the most surprising aspect of this fascinating piece of work.

These murders happen because time, history and the structure of the universe need a big push, and Gull is the blunt instrument to carry it out. The latent irony comes only to us, the audience.

Gull is the man for the job because he is a product of his time, a misogynist and classist who believes femininity is a plague to the world. Women in charge of their sexuality is to the detriment of us all, as rational thinking is what keeps the world structured.

He is everything wrong with the Victorian era in one person. And the motherfucker creates the future. Terrifying.

But what does this teach us about the relationship between history and fiction? History is a document of the past; fiction is an estimation of the future or in general what could be.

In the context of the Jack the Ripper murders, history leaves us with an incomplete picture

A brutal series of killings which was never and will most likely never be solved. From Hell’s job is to make sense of the chaos. Brilliantly, the story presents these murders as the catalyst for a century of violence culminating in the outbreak of World War II (Hitler’s parents make a cameo appearance. While fucking. No joke.)

The true crime genre has grown in popularity recently, an onslaught of podcasts, non-fiction books and Netflix series. However, they are bogged down by one thing: they’re true to life. There’s no room for speculation.

Here, working with a real life murder spree which has been reviewed countless times with all kinds of theories as to why what happened happened in the way it did, the Whitechapel killings have become a form of storytelling by symbiosis (Moore points out the fruitlessness of any further investigation in his appendices).

Only writers can contribute their ideas anymore. The experts have told us everything they know. So, what direction does Moore take things in? He does what any writer would do: he makes it his own. And in making it his own, things are only more frightening.

The horror here is the role we play in the universe; how we behave influences the gears that make everything turn.

Standing covered in the blood of his final victim, his job now finished, Sir William Withey Gull has a vision of the future he’s now solidified.

He stands in an office, a phantasm among the inhabitants of a world he’s had a hand in creating. And he’s terrified. Women wear clothing that by his standards are whorish. People sit at desks, lost in banal work and menial tasks. This is the evolution of society, and Gull finds this future far more terrifying than any grisly murder. This is his life’s work, complete and inevitable, and it scares him. Most glorious and most horrible.

He returns to Netley, the empty-headed driver finally coming to understand the ramifications of the situation he’s wound up in. Gull, now both fascinated and mortified by the effect his actions will have, simply accepts what will come to pass: “It is beginning, Netley. Only just beginning. For better or worse, the twentieth century. I have delivered it.”

While From Hell’s epilogue is a transcendent masterwork that’s too expansive to detail here properly, it is this moment where the story truly comes full circle. 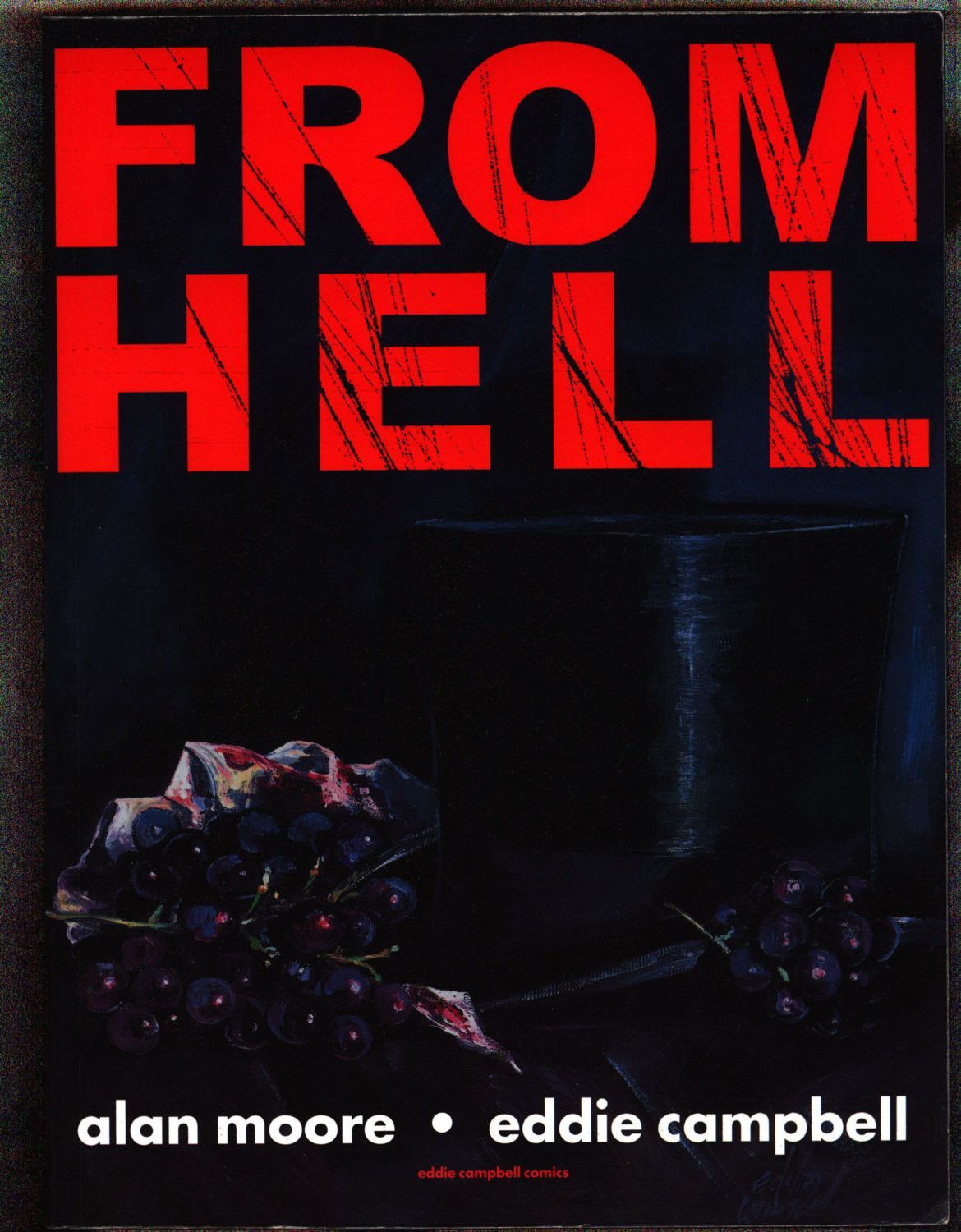 Our world, our society, our culture all influenced by a man who killed to create it. To create a future which is the antithesis of his values.

Perhaps this is what true horror is. A world of random violence where we play parts to which we are assigned. Gull stands above everything with the knowledge he has, but he is still a puppet.

Another of Moore’s works asked a question which has a worrying answer: What keeps mankind alive? The answer? Monstrous deeds.