Scream Factory resurrects the Karnstein trilogy film, “LUST FOR A VAMPIRE”, giving fans a chance to rediscover this underseen vampire film from Hammer. 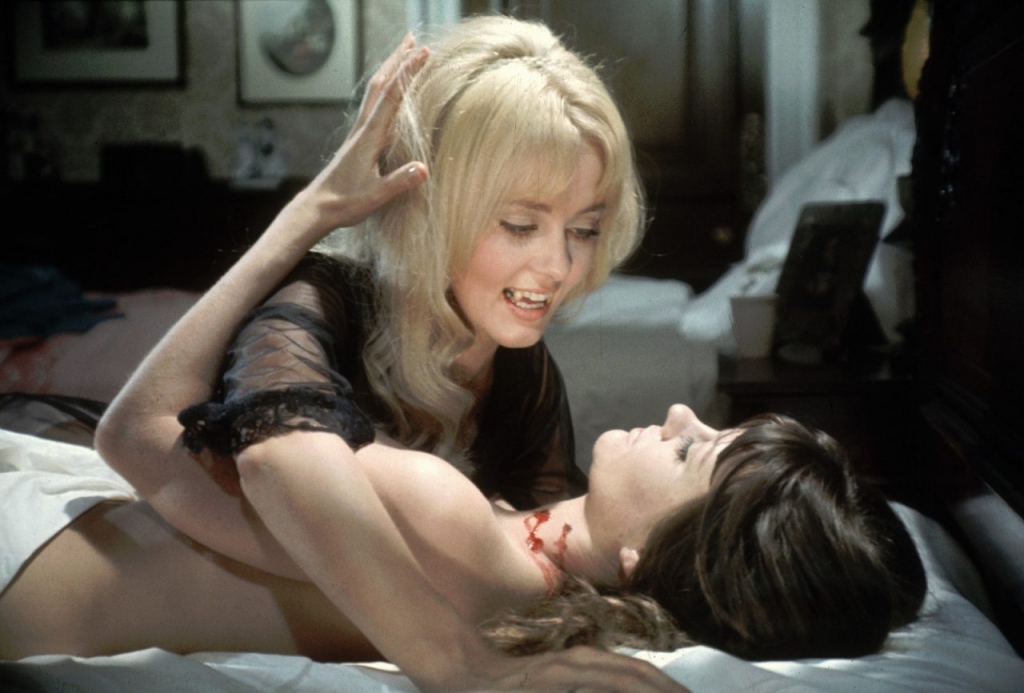 Hammer Film’s LUST FOR A VAMPIRE was a Hammer release blind spot for me until recently. I did grow up watching Hammer’s successful and ground-breaking films but my knowledge of their entire catalog of movies and studio history had some holes. While I knew Hammer produced a trilogy of Karnstein movies during the early 1970s, I once believed that the trilogy included THE VAMPIRE LOVERS, TWINS OF EVIL, and VAMPIRE CIRCUS.

Recently I learned that VAMPIRE CIRCUS was not part of the trilogy, and LUST FOR A VAMPIRE (a sequel to THE VAMPIRE LOVERS) was the second installment of the classic trilogy. 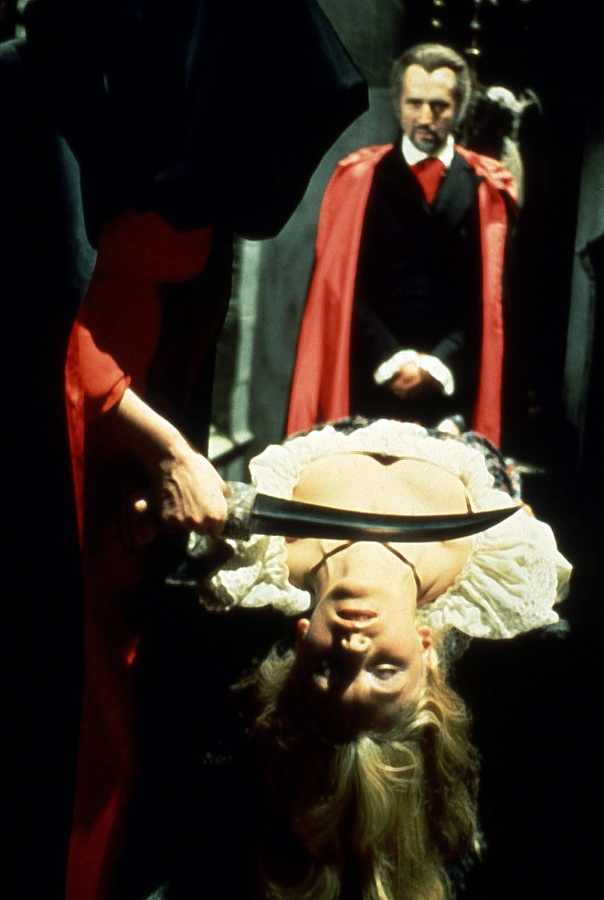 The stars aligned with my personal alignment, as Scream Factory announced the release of LUST FOR A VAMPIRE on Blu-ray (release date July 30, 2019).

Finally, I would see the part of the Karnstein story I had been denied seeing as a child.

To clarify, I grew up in a world before the Internet and home video releases. My only options to see horror movies was Creature Double Feature on Saturday mornings, local New York TV station WPIX, and catching a late-night broadcast on NBC or ABC. I don’t remember LUST FOR A VAMPIRE being in the regular movie lineup for any of those viewing options. 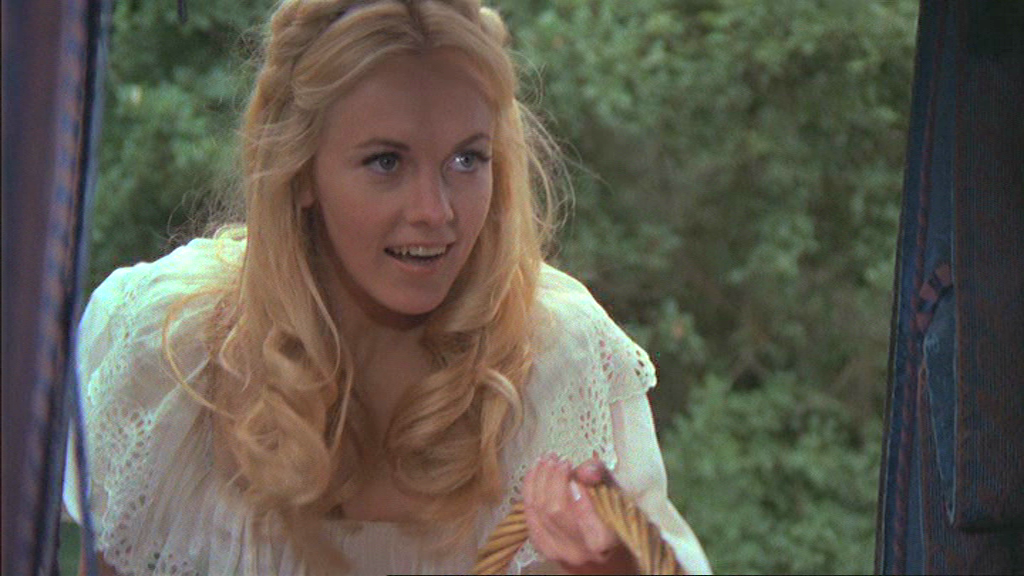 LUST FOR A VAMPIRE is a sequel-in-spirit to THE VAMPIRE LOVERS.

A young peasant girl walking in a field is picked up by Countess Karnstein (aka Countess Herritzen) and brought to Castle Karnstein. There the remains of Carmilla are resting in a coffin. Count Karnstein (Mike Raven), looking almost Christopher Lee like, appears to perform a black art ritual and blood sacrifice to bring Carmilla back to her undead, vampiric state.

Once revived, Carmilla, (Yutte Stensgaard replacing Ingrid Pitt, who was working on COUNTESS DRACULA at time of filming) now calling herself Mircalla, enrolls at a nearby finishing school for girls. Accompanied by her vampire mother Countess Herritzen, Mircalla establishes herself as a young debutante and easily fits in among her flock of female prey.

Unlike the previous vampire movies from Hammer, there is no nemesis in the guise of a vampire killer or witch hunter for Carmilla and her Karnstein clan. 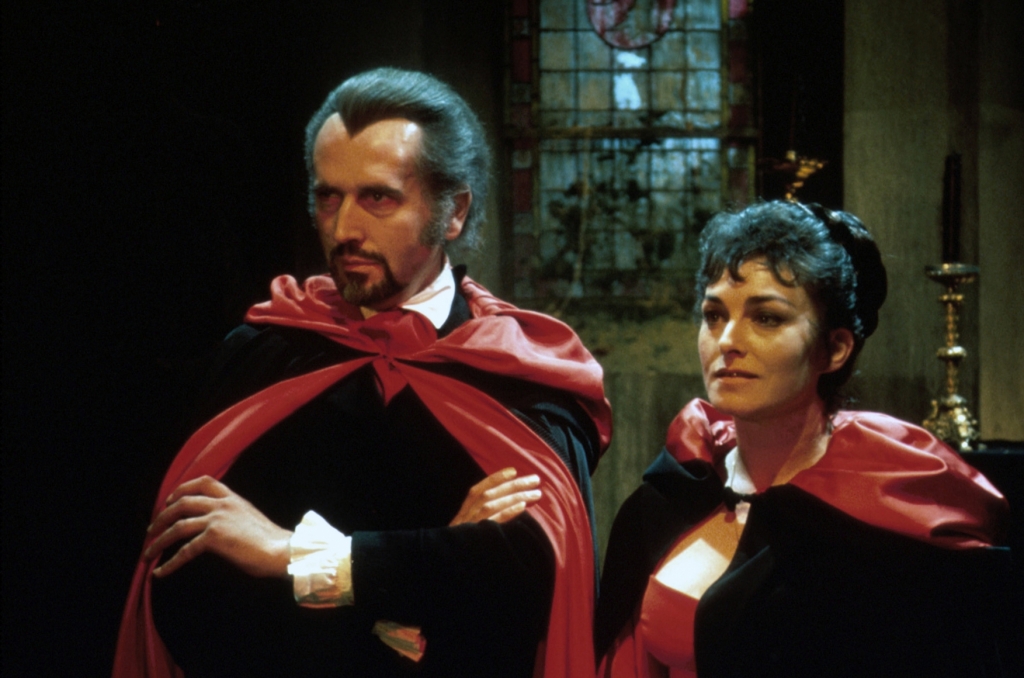 While the local villagers are anticipating the return of the Karnstein vampires, they don’t take any proactive actions to try and stop the inevitable.

The only source of trouble for the Karnsteins comes from supernatural author and finishing school teacher wannabe Richard Lestrange (Michael Johnson), who quickly falls in love or lust with the captivating Mircalla. She encounters a challenge for Lestrange’s affection from school teacher Janet Playfair (Susanna Leigh), forming a dramatic romantic triangle.

Also, at the school is male teacher and headmaster Giles (Ralph Bates), who has been studying the family history of and preparing for the return of the Karnsteins, specifically Carmilla. But he has no interest in destroying the vampire clan. His true intention is to join them as their faithful servant and slave to Carmilla. It’s not long before the drained bodies of the Karnstein victims begin to pile up and suspicion falls upon Mircalla, and whispers of her vampirism starts to rise. 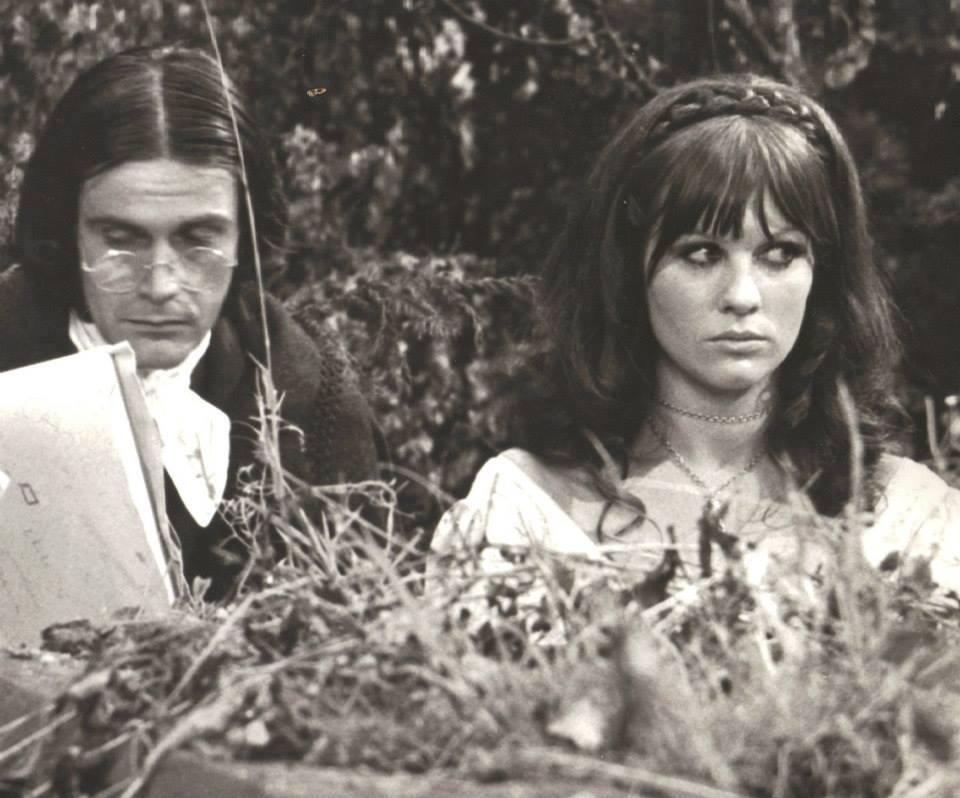 LUST FOR A VAMPIRE checks all the Hammer vampire movie boxes.

You get a spooky crumbling castle, fog, beautiful women with heaving bosoms and deep cleavage, a ceremony to revive a once defeated vampire, a dramatic gothic score, and gallons of deep red blood.

But of the three Karnstein-based movies, LUST FOR A VAMPIRE is the weakest of the trilogy, and that could be due to several issues that came up before the movie started shooting.

While Hammer asked Ingrid Pitt to come back, she had to turn down the opportunity to return to the role of Carmilla to film COUNTESS DRACULA. Though in later interviews, Pitt stated that she turned down LUST FOR A VAMPIRE because she thought the script was terrible.

Peter Cushing, originally cast in the role of headmaster Giles Barton, had to back out of his commitment due to his wife’s illness. And original director Terence Fisher was forced to leave the production due to an accident which left him with a broken leg. Hammer brought in director Jimmy Sangster, who was in post-production on HORROR OF FRANKENSTEIN and was looking to leave the horror genre after HORROR OF FRANKENSTEIN was completed.

The film does suffer a bit without star Ingrid Pitt, but Yutte Stensgaard does an admirable job in the role.

Stensgaard, as noted in the commentary tracks, better fits the role as a younger looking Carmilla than Pitt who was in her 30s during the filming of THE VAMPIRE LOVERS. Pitt, however, has a presence on screen that commands attention, and that is not something that can be replicated by Stensgaard. 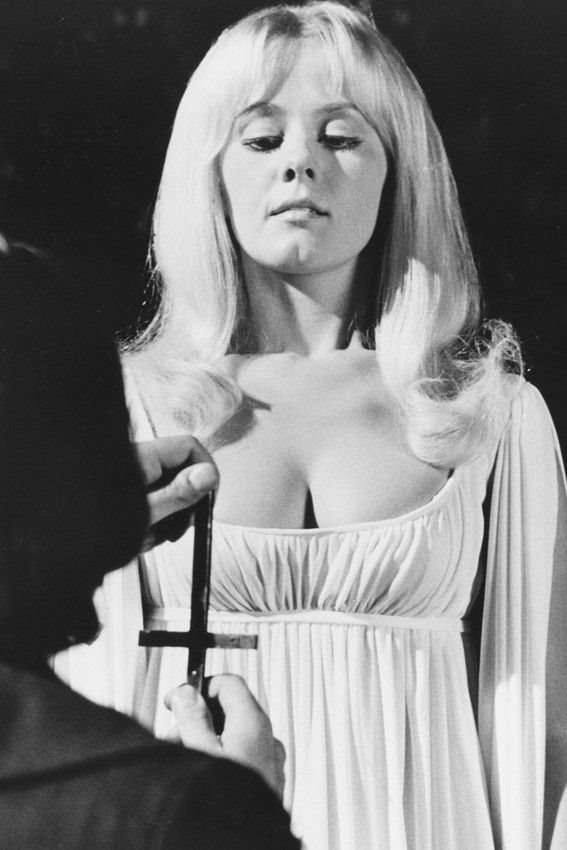 LUST FOR A VAMPIRE is bit campier and sillier than the other Hammer vampire films.

This includes a love scene with a romantic pop song (“Strange Love” performed by artist Tracy) playing over the tryst. The song is a cringe-worthy inclusion into the movie, though the song works more effectively in a later dream sequence. While there is plenty of blood and gore to go around, none of the vampires flash their fangs until the very end of the movie, which seems like a strange decision to me.

Another odd choice was to hide the identity of the vampire attacking the villagers early in the movie. We must assume that the attacking vampire is Carmilla, but the actual vampire is never revealed, and it could be Carmilla or the other two Karnstein vampires. 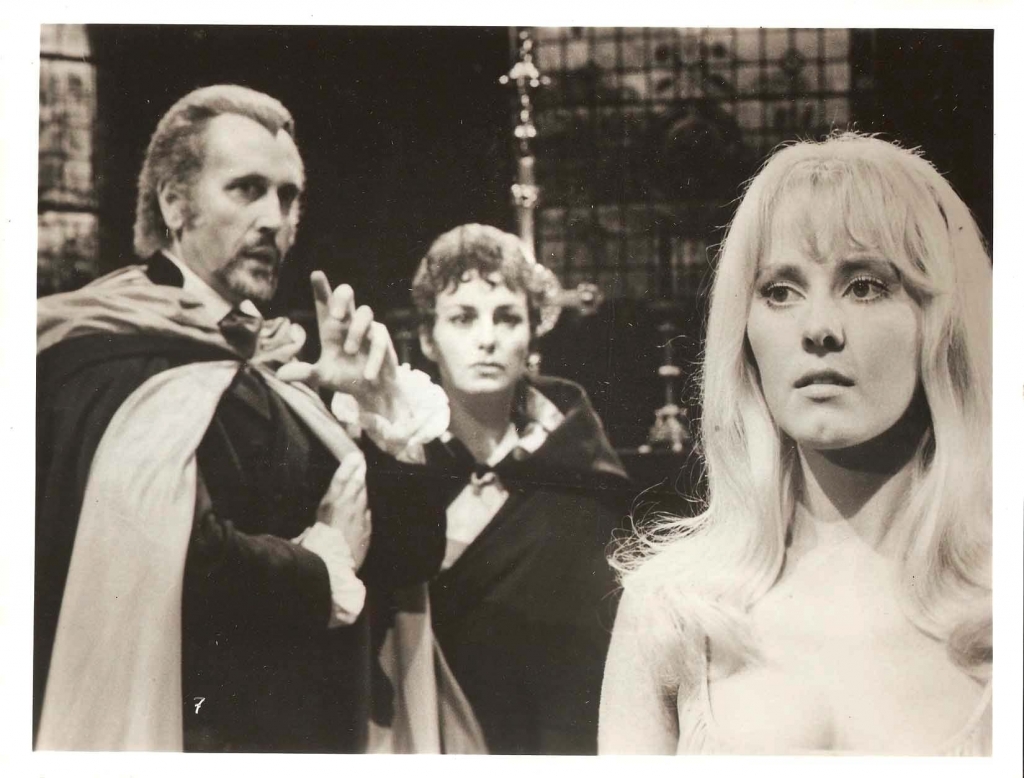 While LUST FOR A VAMPIRE has its weaknesses, the movie is a solid Hammer addition and not deserving of some of the scorn given to it by fans or the people who worked on the movie. Along with THE VAMPIRE LOVERS, the movie helped set the template for what could be shown in vampire movies, namely nudity, homosexuality, and sexual situations.