“Exorcism at 60,000” Feet marries a great concept with poorly executed comedy, and a script that fails to rise to the talent of its cast of genre greats. 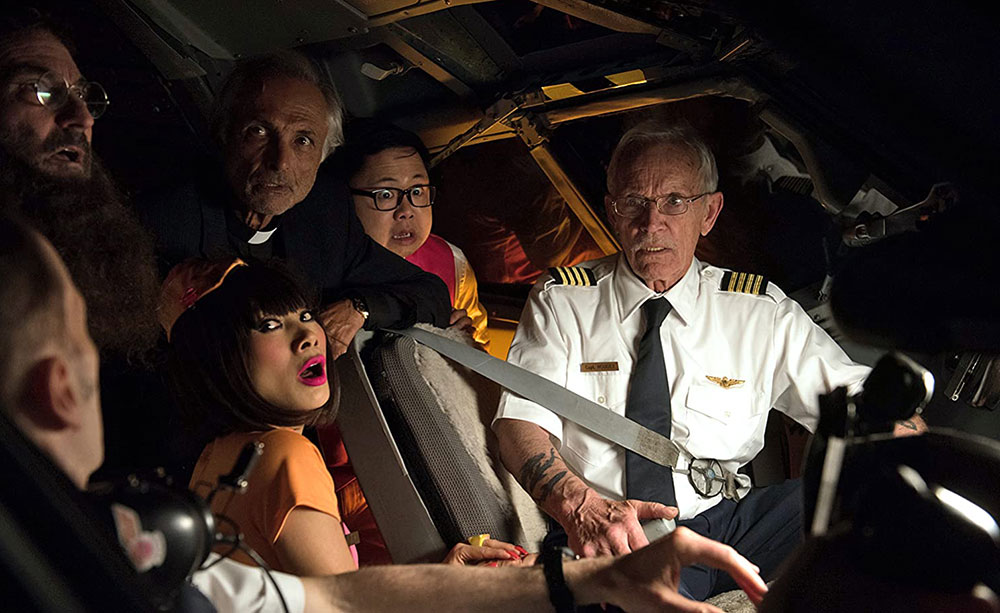 Exorcism at 60,000 Feet opens with a homage to William Friedkin’s The Exorcist. A priest (Robert Miano) in silhouette, bathed in an eerie mist, approaches a home in the dark of night. Slightly bent, carrying a bag, draped in an overcoat, and wearing a top hat, he wearily approaches the door to the home. Father Romero enters the home to combat a family beset by a demon.

The battle does not end at the home, as you can tell from the title of the movie, it moves to an airplane soon after the opening scene is over. The last transatlantic flight of the plane’s Captain Houdee (Lance Henriksen), Father Romero boards with the now dead body of the possessed Vietnam veteran Garvan (Bill Moseley) that he battled at the house.

As the plane departs and heads toward Ho Chi Minh, Father Romero soon learns that the demon is still around and determined to possess all the passengers on the plane. And he will need the help of a rabbi, the flight crew, and the passengers to finally defeat this ancient evil.

Exorcism at 60,000 Feet is a horror comedy that tries to emulate comedies like Scary Movie and Airplane. 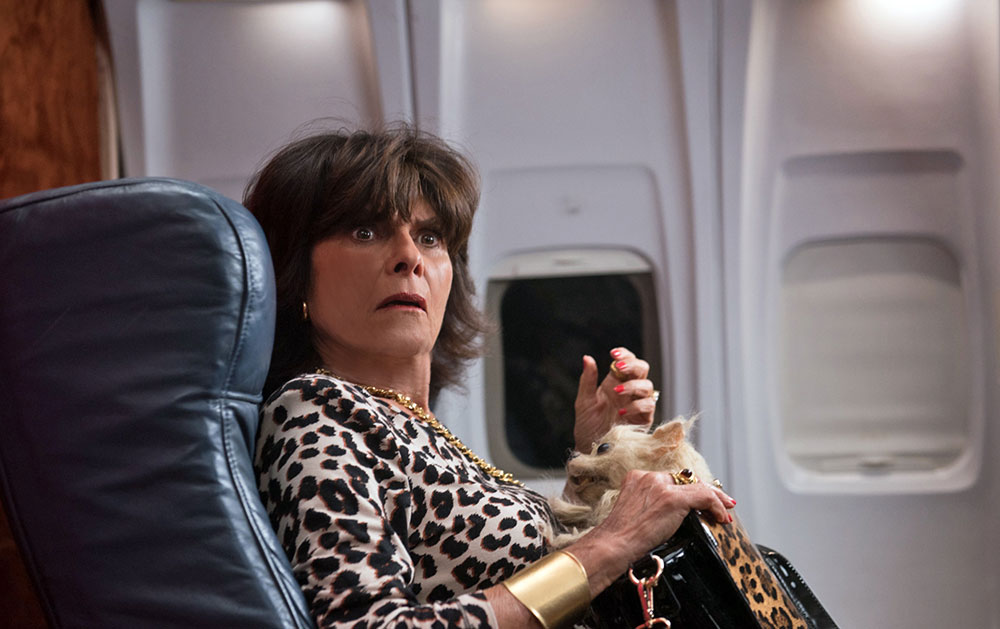 Unfortunately, most of the time it fails to earn its laughs.

The movie tries too hard to be funny and offensive in a politically correct world. One of the problems is that in trying so hard to be offensive with outdated and overused racial stereotypes, and overplayed caricatures of people from all walks of life, it fails to land any humor or criticism of the current PC culture.

The script written by co-star Robert Rhine (the Rabbi) and Daniel Benton throws a lot of comedy punches, but lands too few to be an effective horror comedy.

The shame of it is, Exorcism at 60,000 Feet has a stellar cast consisting of the great Kevin J. O’Connor, Adrienne Barbeau, Bill Moseley, and Lance Henriksen. They all do their best, but the material doesn’t rise to their considerable talents.

Director Chad Ferrin does a solid job recreating some iconic imagery from The Exorcist and The Twilight Zone. 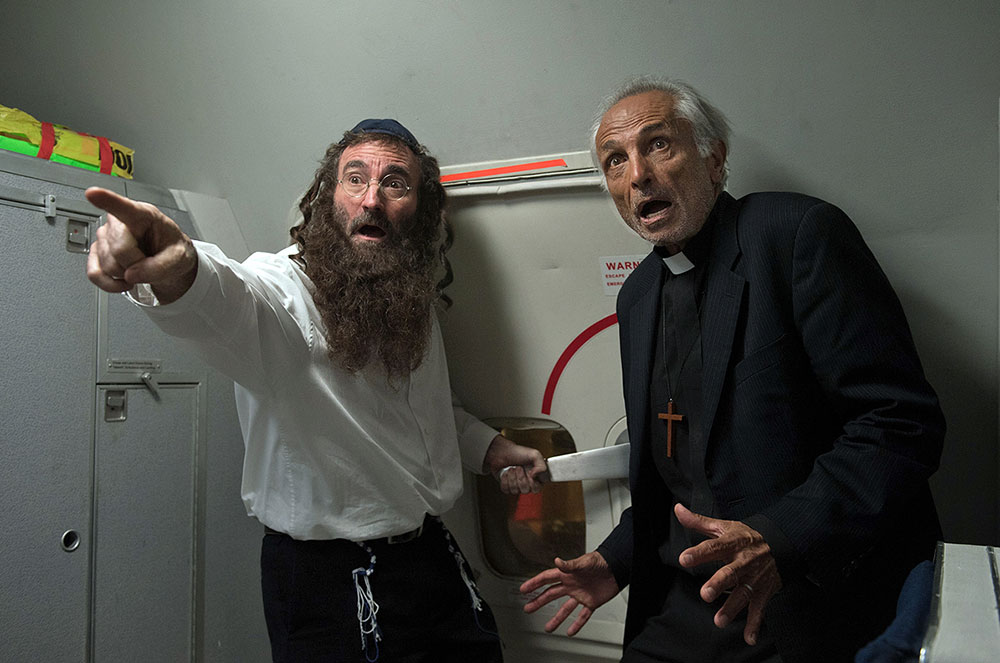 Ferrin is able to visually emphasize the cramped quarters of the airplane, and some of the jokes are helped immensely by the visuals. I’m like anyone else who thinks body fluid humor will always be funny.

The score was created by composer Richard Band. If there’s any doubt about the main comedy inspiration for Exorcism at 60,000 Feet, that doubt will be erased by the use of musical cues from the Elmer Bernstein score for Airplane.

Exorcism at 60,000 Feet starts off with great promise. 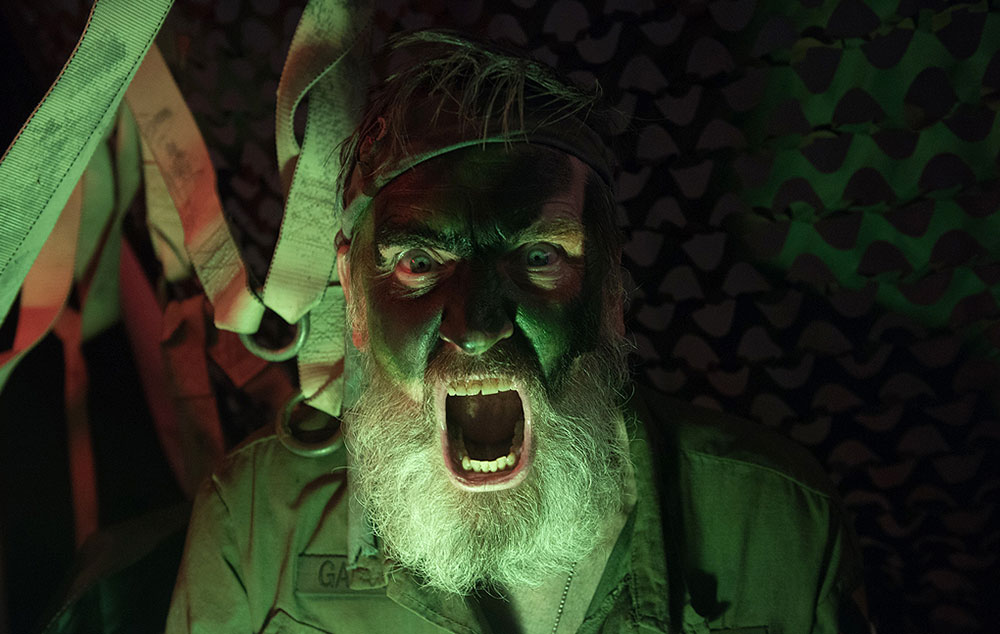 The excellent premise would excite any horror fan — possessed passengers on a plane, in the middle of a long fight, with an exorcist fighting to defeat the demons and save as many people as he can. It’s a premise ripe for a parody of possession movies that mixes in some great horror elements.

Unfortunately, this is one flight you can pass on catching.

Exorcism at 60,000 Feet was released on Blu-ray/DVD by Scream Factory on May 5, 2020. For more details, visit the Shout! Factory site here.