Like its extreme real-world inspirations, “Haunt” finds fear on the blurry line between make-believe terror and release-form torture.

Halfway down Ohio, there’s a haunted trail. It’s somewhere south of Grandpa’s Cheesebarn and north of Columbus, I think. The sign’s never there when I’m looking for it, nailed to a bank of dead trees off the east shoulder of I-71. Massacre Woods. Ghostly Acres. I forget the name, but you know the Mad Libs.

I’ve never gone. Truth be told, I probably wouldn’t even if the sign was there on the off-trip I had the time to take a detour.

Haunted houses, the fake kind with drama majors, scare me. The service they provide is a contact high of death and dismemberment. My brain understands this. My reflexes, though, forget in the heat of peril. But I’ve made my peace with theme park haunted houses. I’m fairly confident Cedar Point won’t gut me like a trout and use my body as HalloWeekends décor. There would be lawsuits or something.

Now take that irrational fear and wipe away the one-time-only comforting power of corporate legal teams. 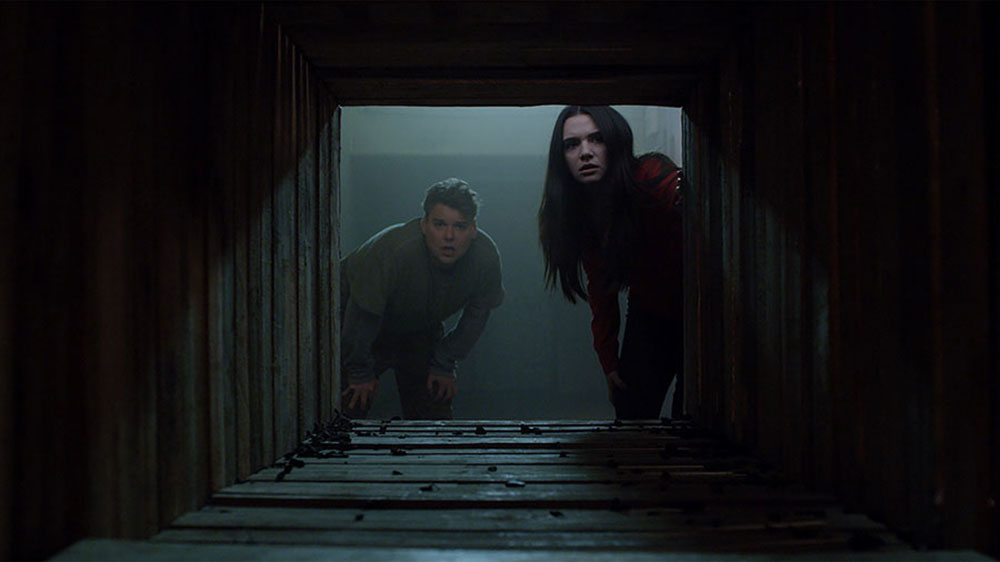 That’s a recipe for real terror.

Haunted trails in the middle of nowhere, only marked by a sagging banner. Sometimes not marked at all. Who runs it? On a given week, how many paying customers walk in? How about a month? How many walk out? How many non-paying customers show up in a panic asking about friends who went looking for the fabled Ghostly Acres and never came back?

It doesn’t make a lick of sense. Murder is bad for repeat business. But tell that to the tickle of anxiety in my bones whenever I see that sign on the side of the highway. The very possibility, no matter how overwhelmingly improbable, that the roaring chainsaws might have real teeth or the people under masks are real killers who found fulfilling day jobs, is chilling enough. 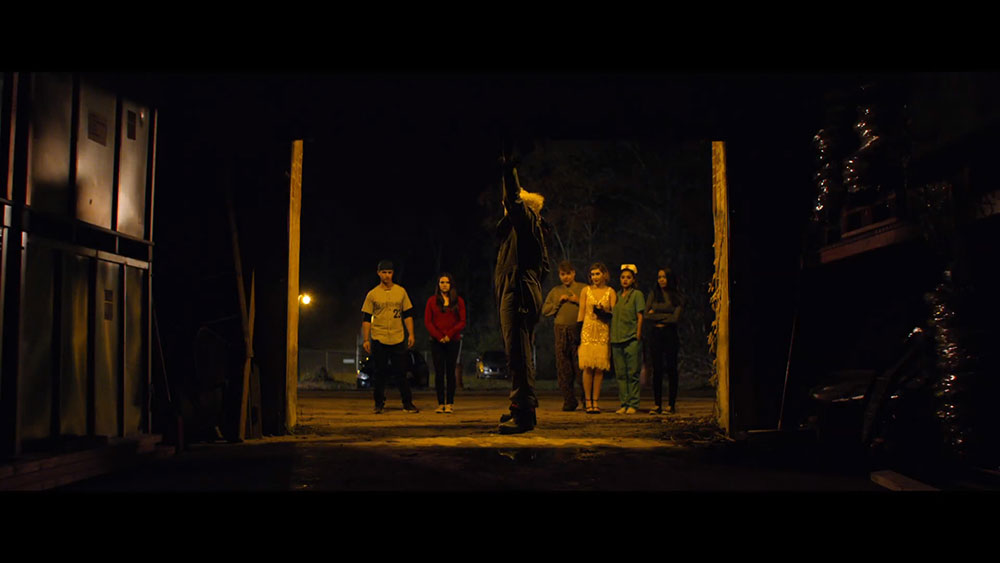 Haunt plucks that oddly specific nerve until it damn near snaps.

Before we get to co-writing, co-directing team Scott Beck and Bryan Woods’s own Massacre Woods, though, we need a cast of characters foolhardy enough to pull over on that proverbial highway and walk the trail, no questions asked.

Enter the party-hearty teenagers who are actually in their early-to-mid-20s. Are they mostly interchangeable? Yes. Will you root for them to die? That’s between you and God. But the star that makes all the difference is Katie Stevens as Harper. All her friends are in it for the patently unsafe fun, but she’ll take any distraction she can get from her abusive ex-boyfriend. It’s a character detail and motivating that could easily tip over into exploitation, but Beck and Woods play it smart. What about the baggage we bring into these simulated deathtraps?

The legendarily intense McKamey Manor is in the news again after its latest home of Summerton, Tennessee, finally had enough. Most of the haunted house community, passionate souls only in it for the love of the scare, don’t even acknowledge the Manor as such. You can find footage of the experience online and in documentaries like the excellent Haunters: The Art of the Scare.

It looks like decommissioned torture footage that would air on CNN as evidence of war crimes. In reality, it was shot in Russ McKamey’s shed. The danger, he maintains to this day, is all simulated. The newest draft of the 40-page liability waiver that all entrants must sign includes allowances for pulled teeth, forced tattoos, and even death, should the waterboarder take too much pride in their work.

I’d be willing to bet they did their research on McKamey Manor, too. The tricks in Haunt are more theatrical than its headbag-and-handcuff agony, but there’s still a waiver and there’s still a question at the back of everyone’s mind: this isn’t real…right?

Harper seems to be the only one who has her suspicions, if not paranoia. She thinks her ex is following her at party he could’ve only followed her to. Her friends tell her to chill out. It’s cool. It’s fine. Just forget him and have a good time at this haunted house that materialized out of thin air.

Well it doesn’t materialize, but the sign, seemingly repurposed/stolen from roadwork somewhere, blinks on out of complete darkness. Might just be my TV, but I didn’t even notice anything there until it flashed to life. Like the Shrodinger’s sign for my accursed trail, it only seems to exist when you’re at your most morbidly curious. 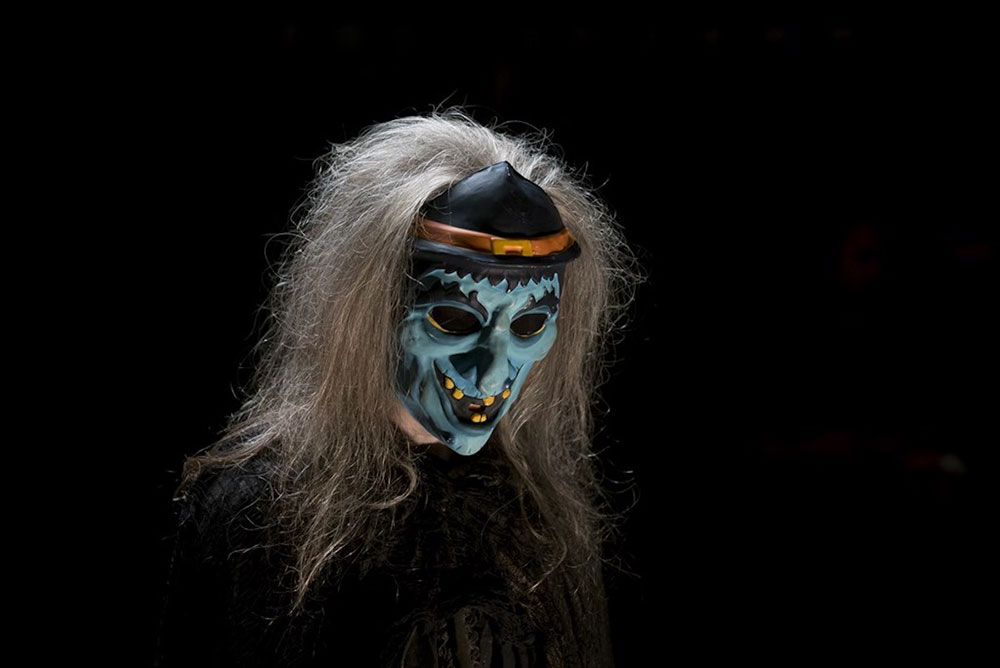 Cinematographer Ryan Samul turns the maze into a hell of industrial shadows and just enough light to see the worrying directions scratched into the walls. But the scares are more deliberate than the pop-goes-the-weasel timing of its contemporaries. The tension isn’t hiding in that conspicuously  framed doorway, but wondering what the next glorified booby trap is on the other side.

The wind-up lasts longer than you think, longer than most haunted houses permit, but that’s just the point. If you know when it’s coming, what’s the point?

It helps that the line-up of will-they-won’t-they-(kill) villains hits a sweet spot of unsettling nostalgia. Each is identified only by the off-brand Ben Cooper mask they wear. Witch. Zombie. Ghost. Devil. The Halloween heavy-weights in lovingly vacuformed plastic, like department store horsemen of the apocalypse.

They don’t speak. Barely move. Never look away. All it takes is the first — Clown — doing a beginner-level magic trick at molasses speed to set the pace. 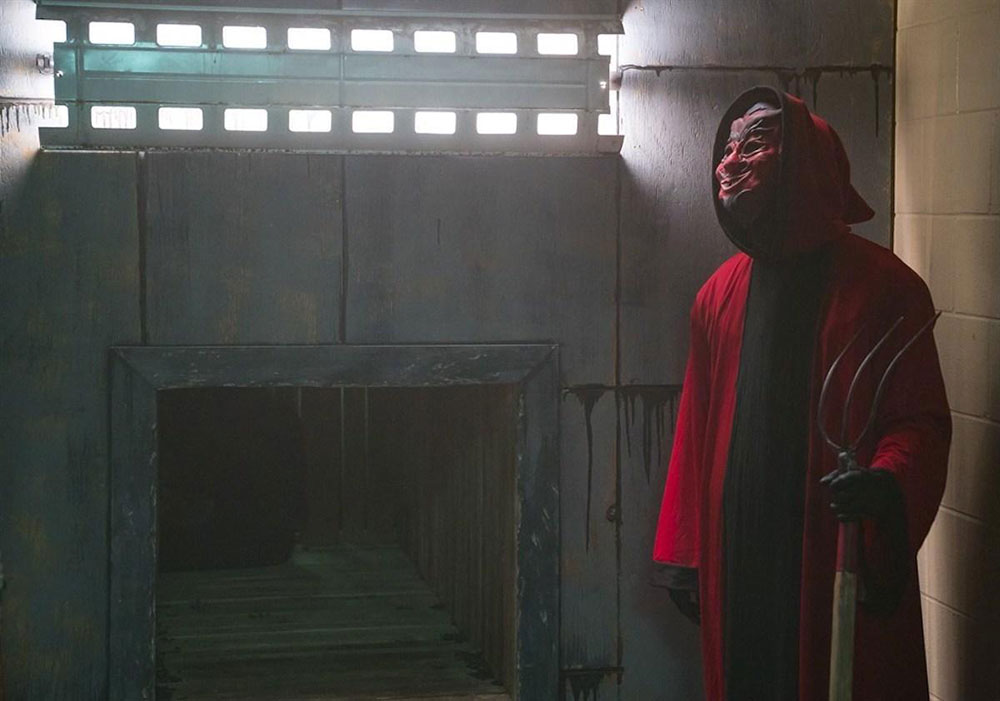 In Haunt, the silence cuts deeper than the screams.

Each “challenge” is another Fear Factor gag from hell. Reach through blind holes and figure out what body part you’re touching. Sea