Part homage to the 80s aesthetic and part skewering of 80s era values and politics, “WNUF Halloween Special” is a unique holiday treat not to be missed. 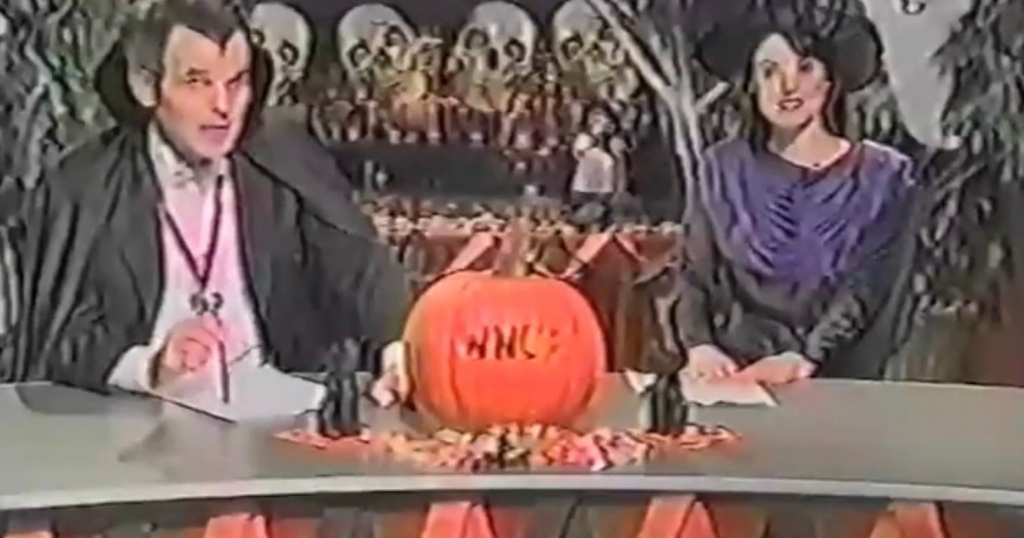 WNUF Halloween Special made me check my phone multiple times, and this may be the only time I’ll ever consider that a recommendation.

I was never bored. I had tweeted nothing so artful or recent that demanded regular stares into my portable supernova. And yet, whenever the WNUF broadcast signed off for a commercial break, I caved on plain, hard-wired instinct. The cumulative effect of the film’s gimmick — a VCR recording of a live news broadcast gone very wrong — fooled me. Not all meticulously falsified ads are created equal. Tricking friends or family members into buying this as a legitimate artifact of archetypal next-town-over Riverhill Township will prove difficult a few breaks before things start going bump in the night. But the sheer spirit of it all got me good.

As somebody who grew up in a Midwestern suburb that considered its roaming chickens a point of pride, I felt WNUF Halloween Special like a fully formed sense memory.

The nightly news — at 11:00 PM, none of that 6:00 PM white noise — held the same dark power as any given horror movie to me. It existed beyond the bounds of my adolescent existence, kept away by curfew and parental concern. Before I knew what “double homicide” meant, I knew that the news was for grown-ups. Tuning in to WNUF hurtled me through cozy time and space. I was suddenly in my childhood home, barricaded under fifty-pound blankets, watching something illicit and unforgettable. Even my beer started to taste like Juicy Juice.

The small army of filmmakers that put together this Halloween Special, spearheaded by director Chris LaMartina and storytellers Jimmy George and Jamie Nash, resurrect the analogue soul of small-town news and dissect it down to the tracking fuzz in 80 scant minutes. It is both the platonic ideal of its form and a broadcast too perfectly programmed to ever exist.

At the risk of putting a finer point on it than anyone involved might’ve intended, the WNUF Halloween Special plays like a public-access Rosetta Stone of modern American culture between New York City and Los Angeles. 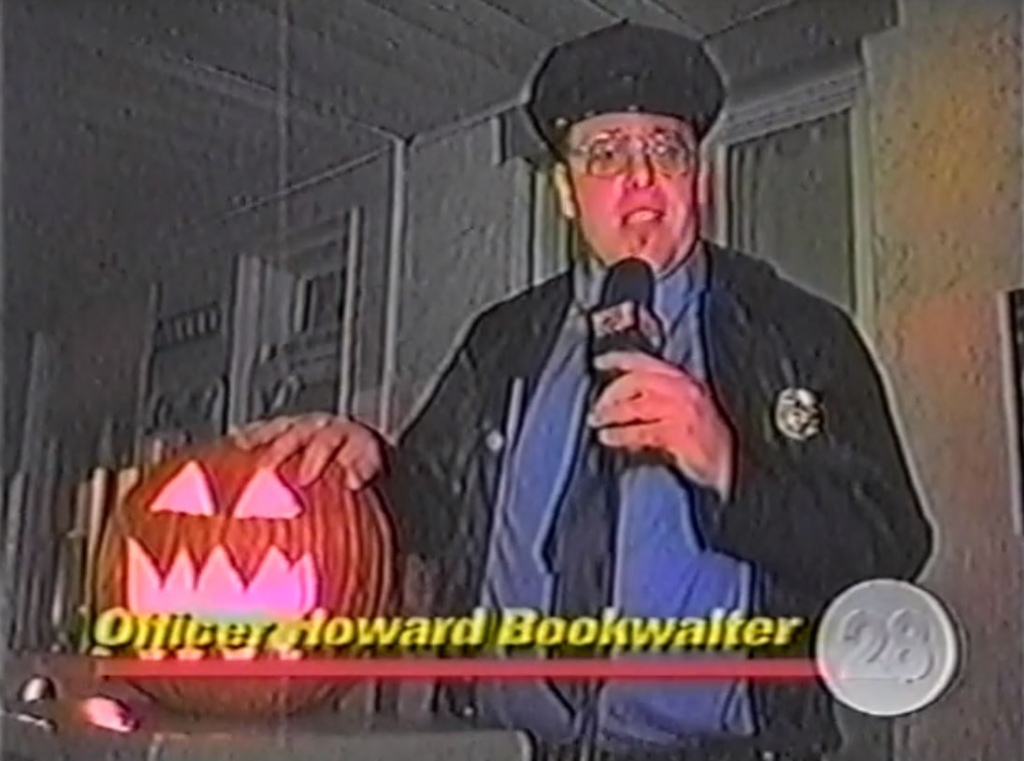 TV28 anchor Gavin Gordon, wearing his best Dracula, sets the tone in a single thunderously lame joke: “Don’t check your dial, folks — you didn’t tune into Transylvania’s public-access station.” The canned banter between Gordon and fellow anchor Deborah Merritt finds the uncanny frequency that vibrates through real news desks. The humor is so light it’s almost transparent, and by the end you’re still unsure if these two people would even look each other in the eye outside the studio. Broadcast demeanor is just professionalism as a spectator sport, never more thrilling than the whiplash of a serious story interrupting a festive pun.

Right after cake coverage of a local dentist buying back candy for a buck a pound, Merritt drops her voice an octave to tee up a package about a dead child. If her flopping witch hat undercuts the import, just stare at the OTS graphic, a news-standard strip of police tape tinted red behind the words Hometown HORROR STORY. I thought for a moment that WNUF also superimposed skulls on it, but those are just the wacky set decorations showing through the fade.

The David Kim story only lasts 45 seconds before the unseen “editor” of the tape cuts it short with a fast-forward. It comes just six minutes into the film, right when you think you’ve got a handle on it. In short, seven-year-old David, wearing his favorite G.I. Joe get-up, knocked on the door of a retired, shell-shocked veteran. The old man shot and killed the Korean boy, mistaking him for a Vietnamese soldier.

Back in the studio, Merritt adds that the convicted murderer is currently on death row. Gordon dips his painted-on widow’s peak toward the camera and somberly tosses to commercial.

It’s not played for a single laugh. If anything, it’s a warning. 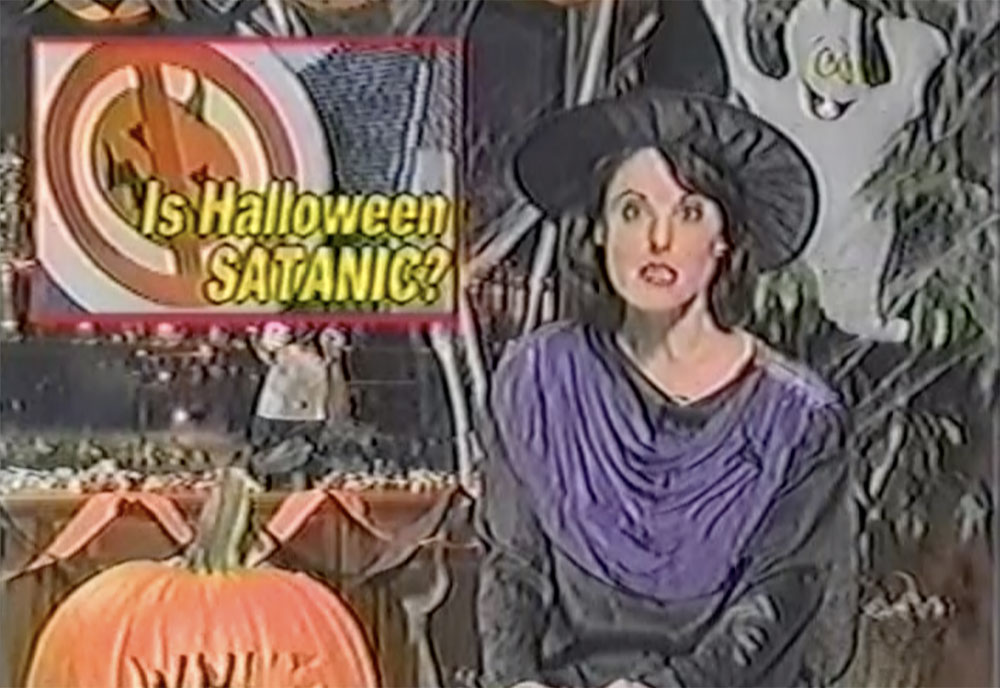 Marvel at the latest syndicated shlock from the Embassy Action Pack. Make plans to visit the 18th Annual Greek Festival at the Riverhill Fairgrounds. Mock the dawn of computerized tax returns. But don’t let the warm-fuzzies get you.

WNUF Halloween Special does something that many louder, prouder ‘80s throwbacks refuse to — it actually comments on its era.

The Halloween Special itself is another dive into heinous true crime disguised, this one better disguised as festive entertainment. Satanic Panic looms large over the proceedings, culminating in a blatantly speculative package on devil worship that WNUF is “weary” to report as news despite doing it anyway.

“Move over, Dirty Harry,” urges an aspirational commercial for the Cloverland Shooting Range right before a PSA warns that drugs are the root of all violent crime in the United States.

One reporter pranks another with a chainsaw on the site of a notorious massacre. When somebody interrupts the scene to scream blasphemy, they’re promptly tackled and apologized away to the loyal viewers at home.

According to this 83-minute broadcast from WNUF, the world beyond the ‘burbs is a proto-Purge hellscape ravaged by pills, gangs, and the literal Devil. 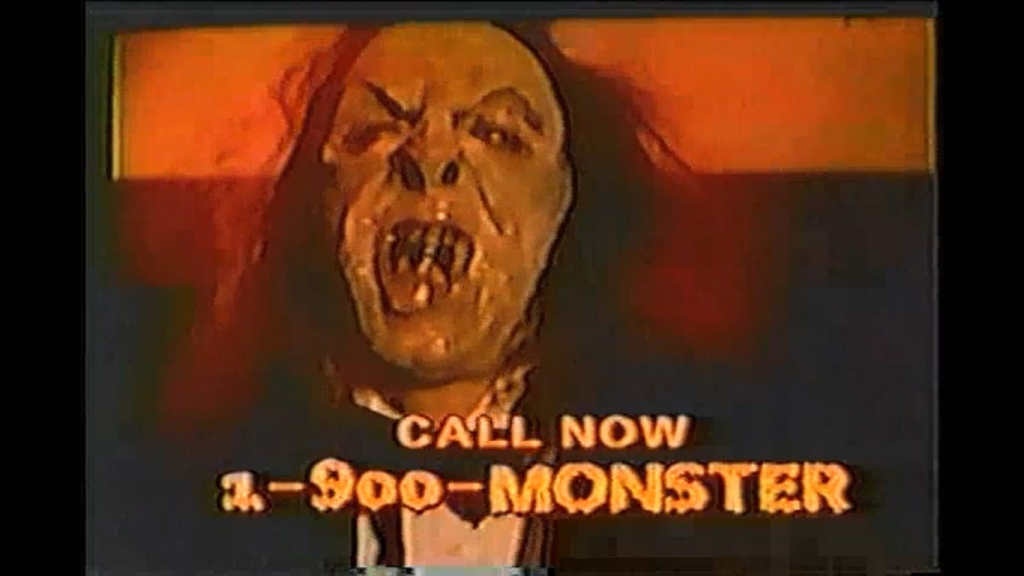 Politicians are all the same, whether they cheat on their wife or take $600,000 in kickbacks from companies actively and irrevocably poisoning the planet. The only heroes are gun-toting cops, gun-toting astronauts, and gun-toting vigilantes. You can’t even trust medical professionals — Dr. Allen says candy is bad, but Dr. Bloodwrench, the station’s resident horror host, says it’s good.

This movie chronicles the dawn of “action news” and the reactionary repression that came with it. Commercials come in four basic flavors — sexy, scary, violent, and carpet — and often play directly alongside their scolding inverses. It’s all junk food, even the orange juice, legitimized by the suit, tie, and lapel mic of your favorite local celebrity.

Before I go cross-eyed squinting at the subtext, I should note that the WNUF Halloween Special is also very funny.

The fake ads walk a delicat