Nothing can prepare you for “The Wolf House” — a fairy tale within a fairy tale, made from the nightmares we only have in nightmares.

The following 1200 words are a slow admission of defeat.

I have many thoughts about The Wolf House, many more concerns, but they’re worth about as much as the paper this blog post is printed on.

The best way to approach The Wolf House is with open mind and closed eyes, the way we greet whatever lies on the other side of sleep. If you have any taste at all for the experimental or disturbing, go with God. That is my comprehensive recommendation.

Everyone else, consider the bit about explaining jokes and dissecting frogs.

Anyway, it starts with a lie and the sound of angels. 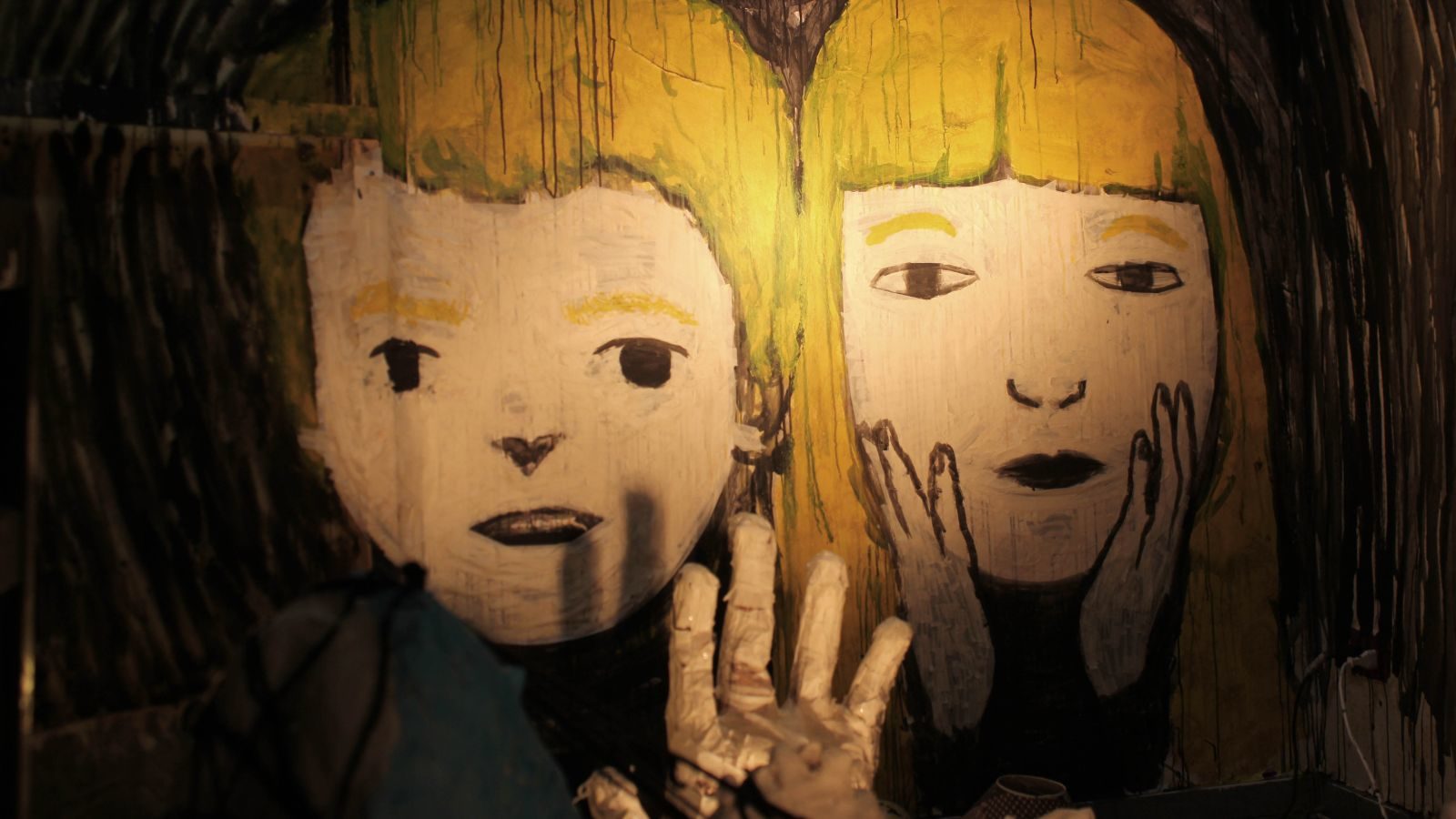 The Wolf House isn’t a brand new work of fiction, but a long-lost piece of folklore from a German commune tucked away in the Chilean Andes. The leader of this peace-loving sect, called The Wolf only because he’s so good at protecting his flock, promises they “live the way human beings were truly meant to live on this earth.”  Their chief exports are honey and rumor.

Despite the cheery b-roll showing fresh-baked pies cooling in 16-millimeter and identically dressed kids playing ball on flickering VHS, “The Colony” has an ugly reputation. The Wolf does not elaborate. It’s only acknowledged at all in contrast to La Casa Lobo, a freshly restored film from their internal collection. What better way to demonstrate the “pure and simple” life than a fairy tale made for the youngest of sheep?

Directors Cristóbal León and Joaquín Cociña work themselves into the ruse as the “restoration team,” implicating their production company and an actual grant from the government of Chile as prime movers. It’s a clever piece of metatext. There are no shortage of interviews that give it away as make-believe, but this muddles The Wolf House with just enough authenticity to take it as-is.

The film within the film feels at first like something third graders would watch on days too rainy for recess. 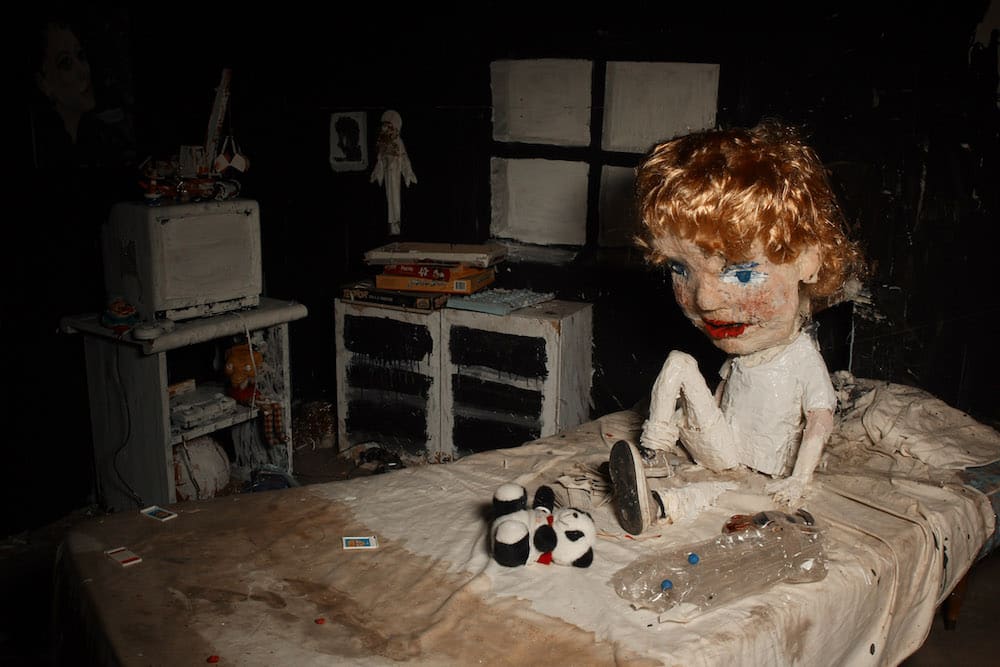 A Technicolor title card. An orchestra of supermarket strings and militant horns. Once upon a time is handled by translation, matter-of-fact with a touch of Grimm.

Little Maria cared too much for animals and too little for work. After letting three pigs escape, facing the punishment of a hundred-day shun, she flees The Colony.

The forest animates, scratchy and nervous, like chalk on a blackboard. This is the first sign of distress. It doesn’t have the chicken-soup hum of old cartoons. It rattles and squirms and twitches with arrhythmia, the inorganic pulse of stop-motion.

Two-dimensional trees sprout like skeletal fingers. A flat hut appears in a flat hollow. It’s just an unconventional choice until the hut grows and the front door fills the frame and it opens into a conventional room. 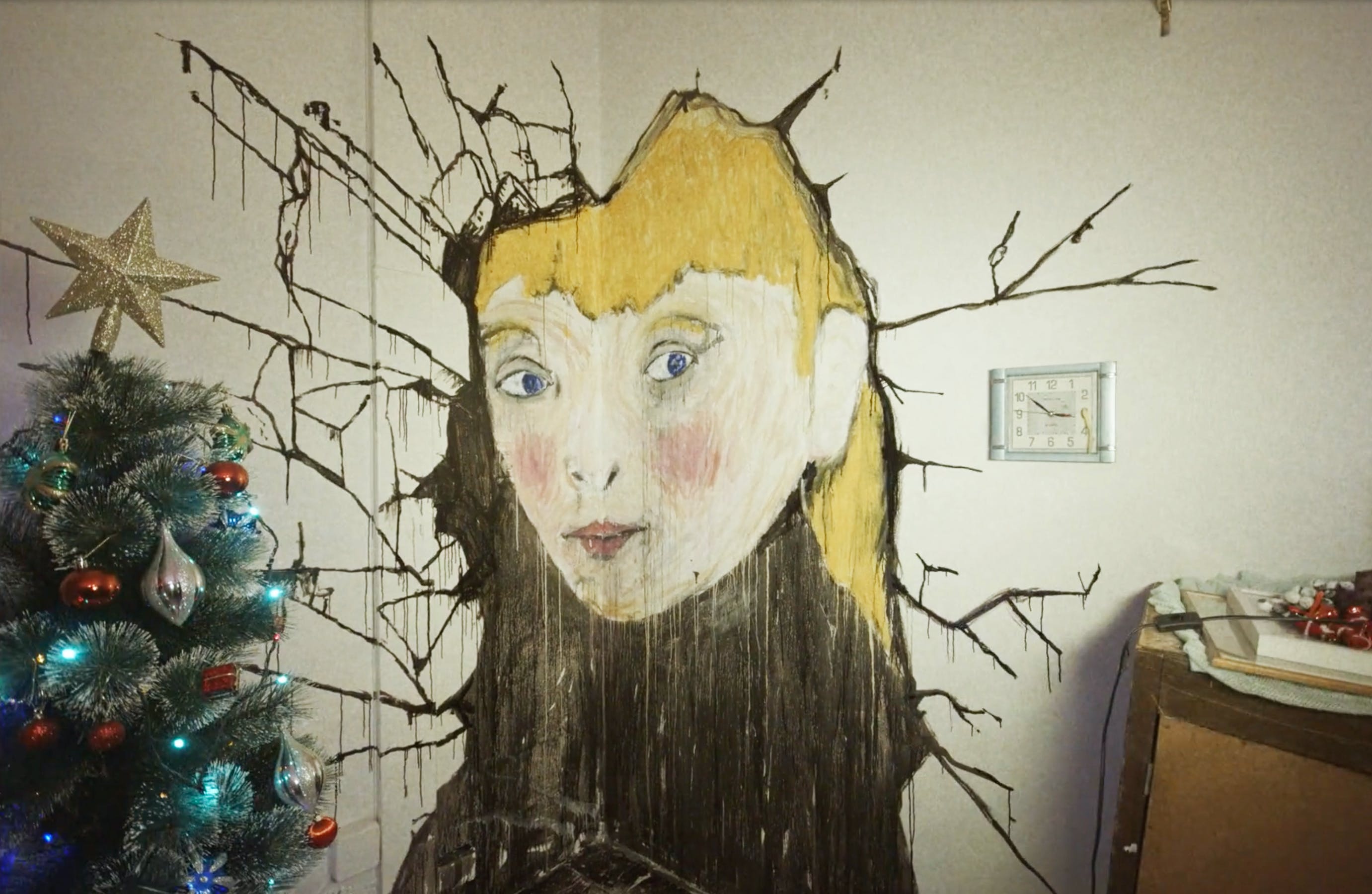 Four black walls around a black floor and lone lightbulb. It’s a dead-end until Maria and the camera look back at the door in time to see the whitewash leave it like a ghost. The rectangle shrinks, the inner shapes multiply, and it becomes a window. Then the rest of the living room arrives. Paintings ooze up. Jackets drag onto useless hooks. A pale leak between the boards rends itself into an ornate throw rug.

The only color is Maria, pink face as tall as a door frame, looking in on her new little world away from The Colony and The Wolf at her heels. She spills across the black, wiping the house clean. For a moment, life flattens again as she opens the pantry.

Then she melts, blue eyes drooling past a smeared scream. It’s not played for horror, it’s just horrifying. Like when the painted remains puddle on the floor and reach for the ceiling like sentient intestines.

Reality is weaponized in The Wolf House. 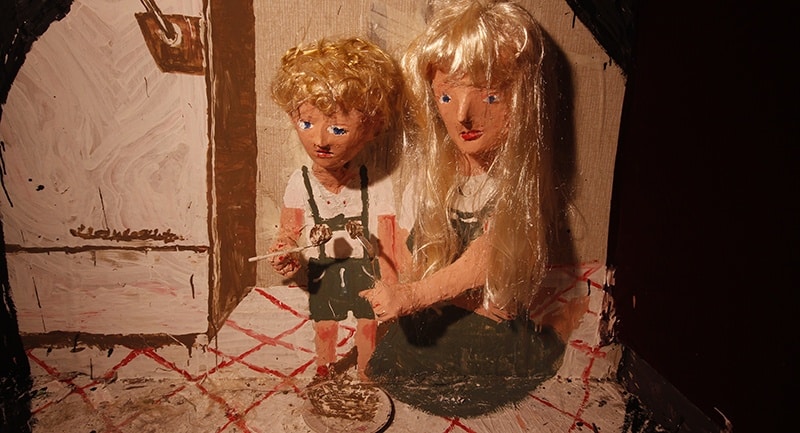 Expect convention and consistency at your own peril. There is no such port in this storm.

The walls are still alive, but now so is Maria, rendered in uncanny papier-mâché. Sometimes it’s smooth, almost human. Sometimes it looks like masking tape crumpled in vicious effigy. When bodies move, they crack, the black innards left yawning until the next few frames cover and color them.

The rest of the film plays like a basement artifact, the kind of thing one loner spends decades doing for nobody else but themselves. It has the sound of anxious cellophane and the texture of a hangnail.

Although the harshest visuals are meted out sparingly and saved mostly for the last fifteen minutes, every frame in The Wolf House is as repugnant as it is magnetic.

Maria and her adopted pigs shred into a loveseat, their pork-pink scraps muddling with the old cushion. The animals grow hands and feet in picture-book illustration, leaving gory shadows of themselves on the wallpaper as they learn to walk. Later on, as night falls over the house, the happy humanoid family constructs in the dark, lit by hotspot like tortured things caught in headlights.

Nightmare fuel doesn’t mean what it used to, but this is a worthy refresher course. 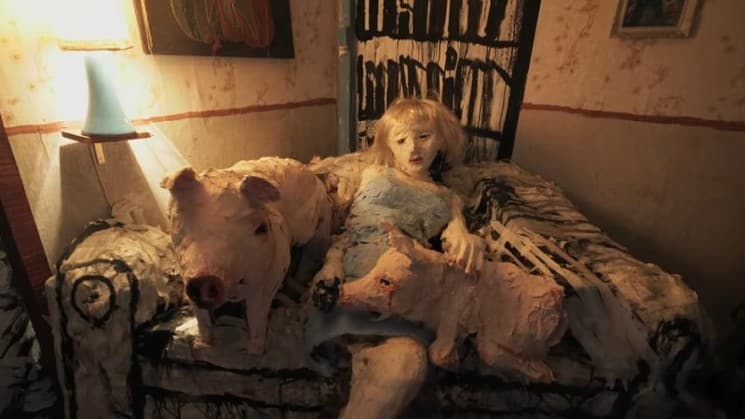 Even the innocence feels wrong, past its expiration date and threatening mold. Then again, that’s the idea.

It’s possible to watch The Wolf House without connecting too many dots to the outside world or even its inner logic. A lot of people will be watching through cross-hatched fingers anyhow. But there is a story worth squinting out among the abstract imagery and abject terror.

La Casa Lobo is already a story within a story, the product of a seemingly sunny commune, but about halfway through it, Maria reads her children another story.

A puppy lives in a house in the woods. The house keeps him safe and warm, but he complains anyway. One day he runs away in foolish rebellion, despite everything the house did for him. The puppy never returns.

As lamps repair themselves from porcelain piles, she ends it with fragile voice:

“Poor house. It wanted to do everything so well. But the dog had been very disobedient.”

Go to your room and don’t dare dream about anything beyond it.

That’s the easiest read of The Wolf House, an inside-out parable on indoctrination, but there are worse devils in the details.