Video Rewind tells the behind the scenes stories of VHS favorites from the video store era, one rental at a time! Press play and adjust your tracking, this month’s movie is “Krull” (1983). 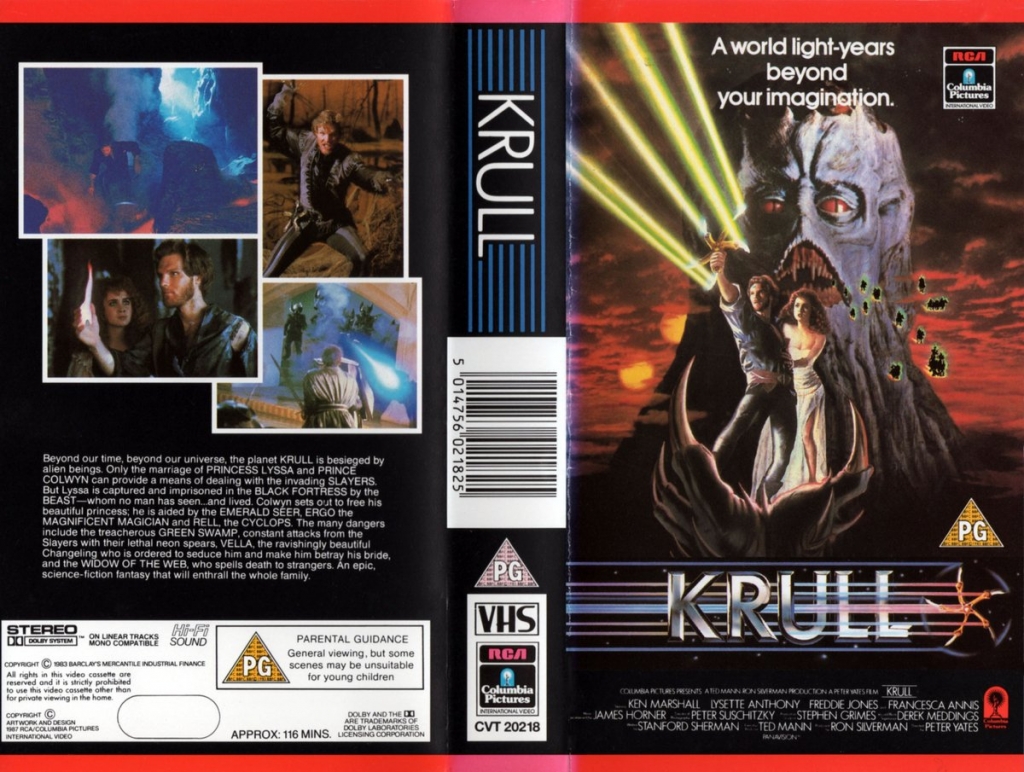 The old was meeting the new in the Hollywood of the 1980s. Epics from director David Lean and producer Cecil B. DeMille, along with B movie science fiction and swashbuckling adventure fare from the 1950s and ’60s, were showing their influence on the next generation of filmmakers. But with the passage of time came new technology and bigger budgets. Steven Spielberg gave birth to the summer blockbuster with the record breaking Jaws in 1975, while George Lucas changed movies forever two years later with the outer space epic, Star Wars.

The old school adventure movie met the big budget blockbuster in 1981 with Raiders of the Lost Ark and Excalibur. In 1983, the big 1950s officially merged with the big 1980s, blending the aesthetic of classic sword and sandal epics with the special effects heavy outer space saga.

Krull was described by Variety as “Excalibur meets Star Wars,” an ambitious, world building, sword and sorcery epic that was one of the most expensive films ever produced at the time.

Director Peter Yates had his breakout picture in 1968 with Bullitt starring Steve McQueen, which has one of the most thrilling car chase sequences ever put on screen. 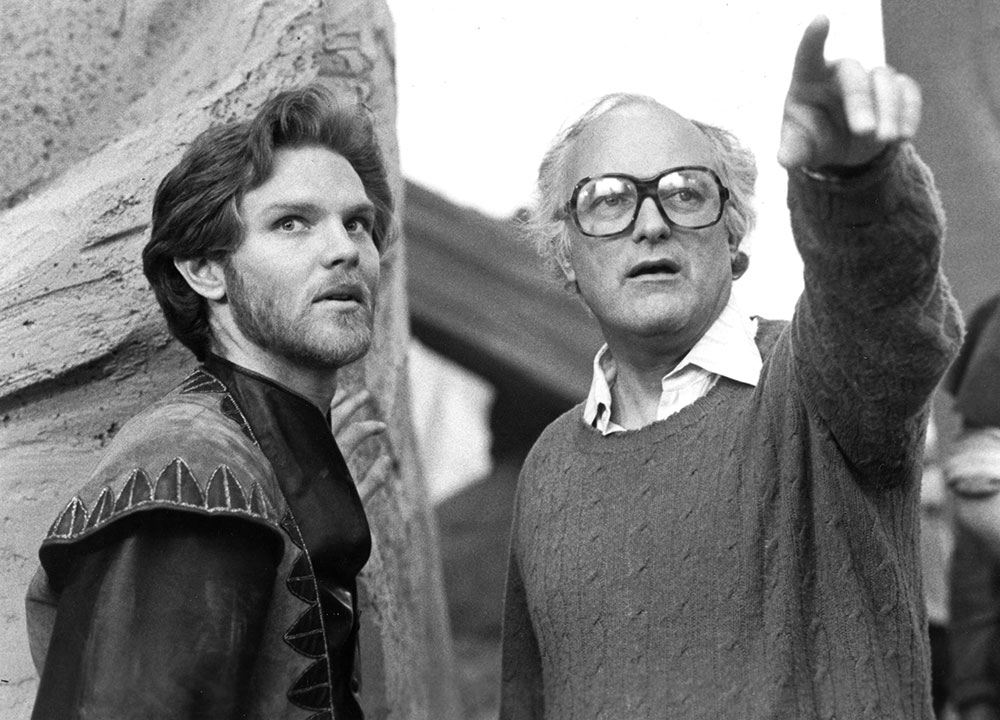 Perhaps his time as a professional race car driver provided Yates with the extra insight to shoot such a sequence. The real interesting part, however, is that it was Yates’s car chase in 1967’s Robbery that convinced McQueen to request that Yates direct Bullitt.

Robbery has long fallen into the dust bin of film history, while the legend of Bullitt still looms. Then again, Robbery didn’t star Steve McQueen.

Yates was hired by producer Ron Silverman to direct a script called The Dragons of Krull, written by Stanford Sherman and to be released by Columbia Pictures. With the idea of dragons later cut, the title was shortened to just Krull, the name of the planet where a dark alien force invades and is pursued by a prince and his band of companions after the princess is kidnapped. Yates had the cast do a read through of the script prior to filming, a process usually designated for television shows. The director wanted the cast to experience the film as a whole, and to understand the world within it so they could know the motivations of their character.

With the cast acquainted with the material and each other, filming began on January 25, 1982.

The opening shot has a strong Star Wars vibe.

First, the spaceship — with jagged, rocky edges surrounding a purple glowing center looking like something out of The Dark Crystal — cruises directly towards the camera. Then the famous Star Wars shot, with the spaceship slowly entering the frame amid the blackness of space peppered with white, distant stars. Instead of a scrolling text before the spaceship enters the frame like in Star Wars, it is here where Krull sets up its story with a narrator describing a prophecy.

The jagged, rocky spaceship from the opening shots is called the Black Fortress, ruled by the Beast and his army of Slayers. The queen and king from the prophecy is Princess Lyssa (Lysette Anthony) and Prince Colwyn (Ken Marshall), who plan to marry. The marriage is an alliance between their two kingdoms, an effort to form a “single kingdom” to defeat the Beast and his planet-killing Black Fortress. While the fathers of Princess Lyssa and Prince Colwyn view themselves as rivals, they are willing to work together for the good of the land. The bride and groom to be, Lyssa and Colwyn, seem genuinely happy with the idea of marrying each other.

Lysette Anthony’s flowing red hair matches the rocky red landscape of her kingdom, as do her blue eyes rival the skies above her castle. 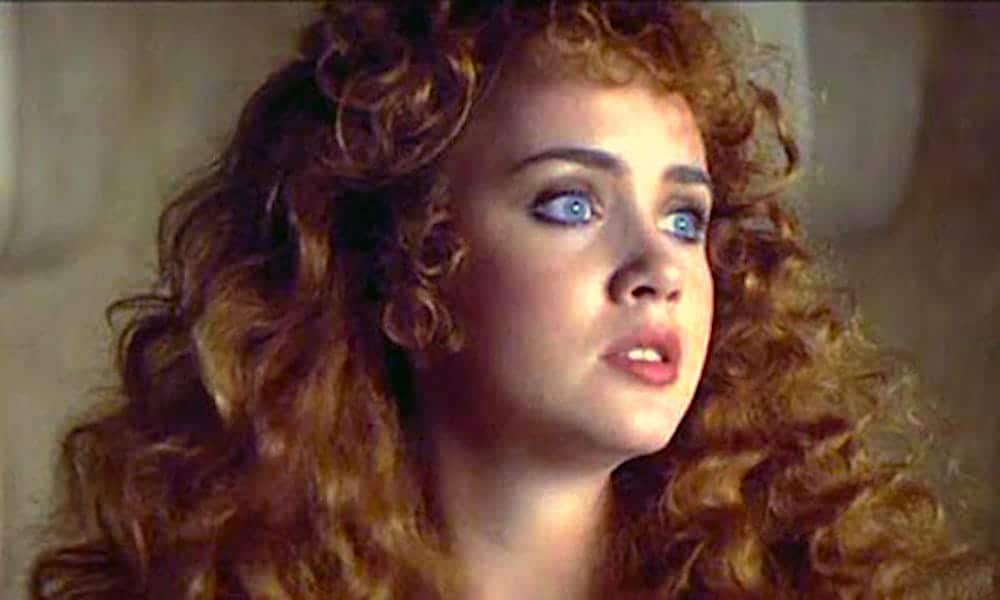 Her beauty has a timeless quality, at once medieval, French New Wave, and girl next door. Famed London fashion photographer David Bailey pinned her beauty to the decade, dubbing Anthony, “the face of the ’80s.” Such an appearance grants the character of Lyssa a deeper magic than she already possesses (being able to draw fire from water), and makes Anthony perfectly suitable for the role.

It’s a shame then that the actress wasn’t able to complete the performance with her own voice, as Columbia Pictures president Frank Price determined an American accent would help with ticket sales in the States (the voice is Lindsay Crouse).