A brilliant series that feels more like an extended feature, Wolf Creek is a must watch for fans of the franchise and intelligent but brutal slasher films. 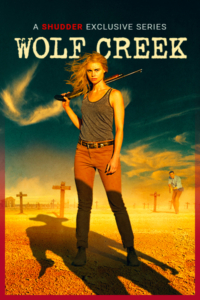 “What the bloody ‘ell are you all doin’ out here?”

An innocuous and harmless question from anybody’s mouth, unless that person is Mick Taylor. In that case, it’s the first thing you’ll hear after you get caught in Mick Taylor’s Wolf Creek tourist deathtrap.

When the original Wolf Creek film came out in 2003, it generated a lot of buzz, and I heard great things about it.  The most appealing thing audiences said was that it featured an unforgettable killer — one like audiences have never seen before. Well, that’s certainly a new element in a horror movies. 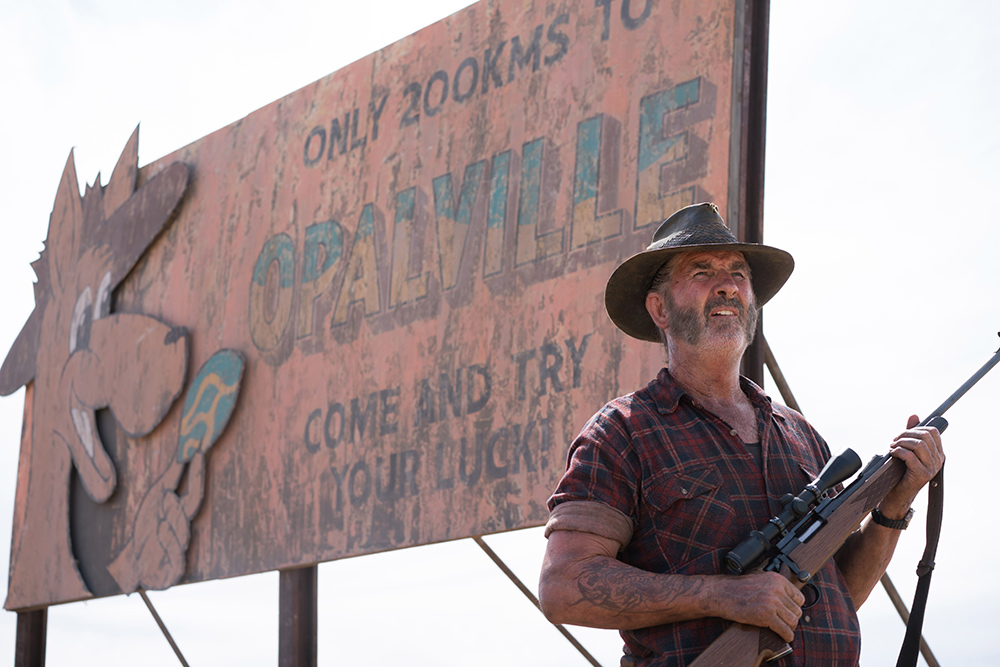 His name is Mick Taylor, an (un)official career killer of overpopulated Outback vermin like razorbacks, dingoes, and of course kangaroos. But there is one other type of vermin Mick loves to hunt down and slaughter: tourists. Vulnerable female ones, especially. But that shouldn’t be much of a surprise. We are in the horror genre, after all.

Mick loves the wild Outback territory which he calls home, and he sees tourists and thrill-seekers as disrespectful interlopers. But he also sees them as fun little toys to stalk, terrify, toy with, torture, violate, and destroy. He keeps many of his victims for extended periods of time, even having his “way” with them long after they’ve died. In many cases, long after they’ve been dismembered and begun to putrefy.

Yeah, this is deep and twisted darkness, the kind I can’t get enough of in horror movies. 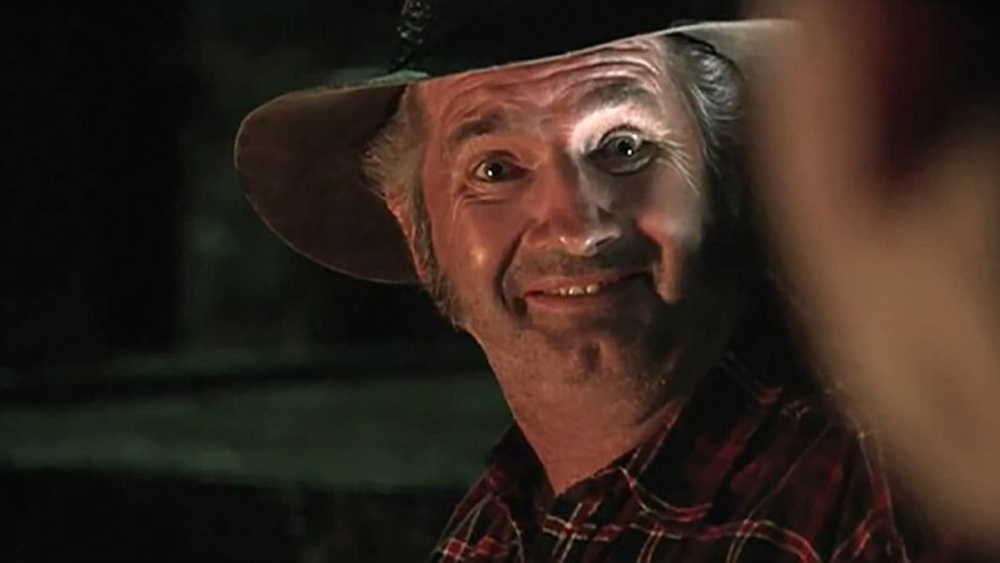 What really pushes Mick over the edge for me is how likable he pretends to be. The affable killer, the one with his right hand outstretched for a friendly greeting, and his left hand behind his back with a knife. Mick wants you to think he is the kind of guy you could have a pint with. Everything he says is said with a smile, and you feel safe enough to truly be yourself around him. Let your hair down. Fart out loud. Laugh at his tales of kangaroo-gutting misadventures.

The Mick Taylor character hasn’t quite reached the level of iconic that other movie maniacs have, but that could in part be because he truly is stalking and killing the innocent. If you look at the tired formula of sex=death, pot=death, or any other horror cliché with a death sentence, that formula is logical and justified within the confines of the traditional slasher horror movie. Call it slasher movie logic, if you will. It isn’t meant to be too grim or taken too seriously. 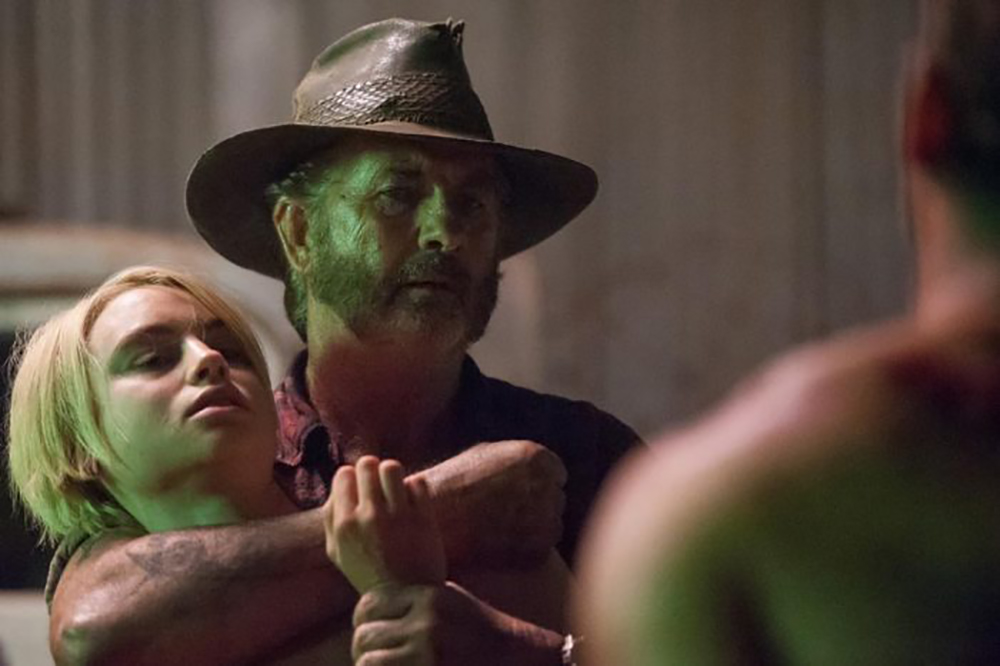 We don’t feel bad for Jason’s victims, because the logic presented to us in the film leads us to tolerate (even understand) his killing. Teens who have sex and smoke pot don’t really deserve to be killed, honestly!  But within the Friday the 13th universe, for example, they do, and it’s fun to watch, and it makes perfect moral and artistic sense.

This is not so with the Wolf Creek movies. Though not exactly the most well-defined characters, Mick’s victims are portrayed as unwitting and innocent in every way. The terrible things Mick does to people do NOT feel right  — certainly not justified, tolerable, and logical. Yet I still have that “fuck yeah” feeling when he has a fresh kill. Does Mick’s laid back and friendly nature make his atrocities easier to deal with? Or have I become too cynical and bloodthirsty? Why do I want to chill for a while and hang out with Mick? 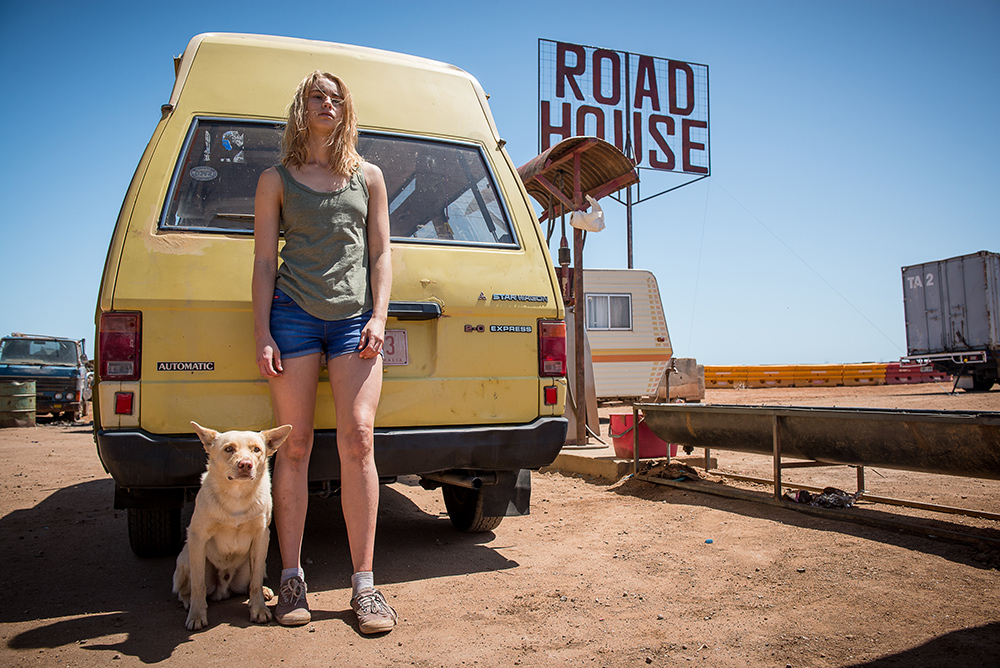 The answer to that question could be searched for in another article. For right now, I am delighted to tell you that Shudder has acquired the first season of the Wolf Creek series. First unleashed by Australia’s Stan streaming service, the show is one continued, serialized revenge epic split up into six separate episodes, with most of them ending in some kind of cliffhanger.

If you loved the Wolf Creek movies and occasionally wondered if a third one would ever be made, well, the answer is “yes”!  Sort of. Stylistically, the show is identical to the two feature films (though it has a much more serious tone), so you could basically consider this Wolf Creek 3, and it’s 4 hours and 44 minutes long!

I highly recommend you set aside an evening and binge-watch the show in its entirety. Obviously, it flows better when consumed all at once, as one single work. 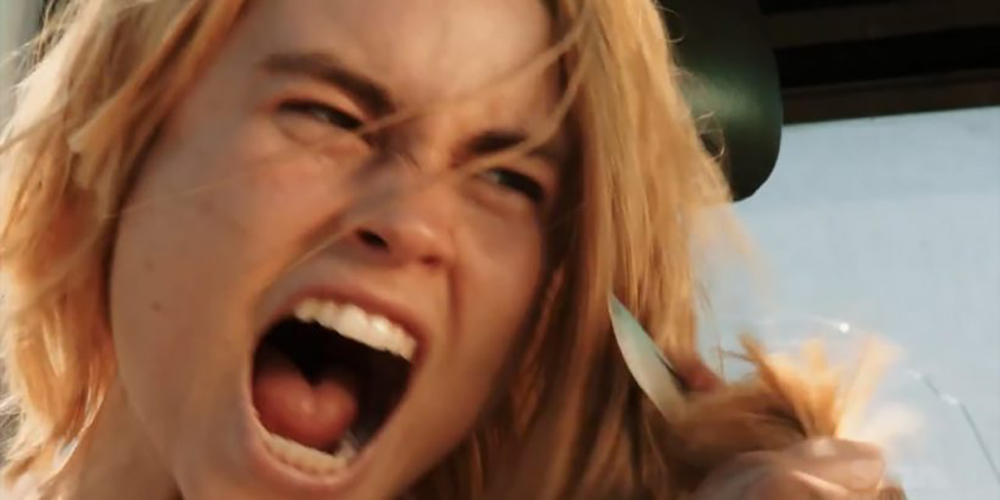 As I mentioned before, the series is very serious. Not that the movies were cartoons either, although the sequel had some light moments. But there is no light here. Mick’s requisite post-kill one-liners aren’t meant to be comic relief, to lighten the brutality of the kill. Sometimes, it seems to me, that in a lot of slasher movies the jokes and one-liners are written first, then the set pieces are built around the jokes.

The hardy-har-har stuff just doesn’t work for me much in horror movies. But it works for me here. Mick isn’t halfway between the movie and the fourth wall, the way the killers in a lot of horror movies are.

Sticking to my usual modus-operandi, I won’t give away one centimeter’s worth of surprises or WTF moments. But believe me, there are tons of those moments. 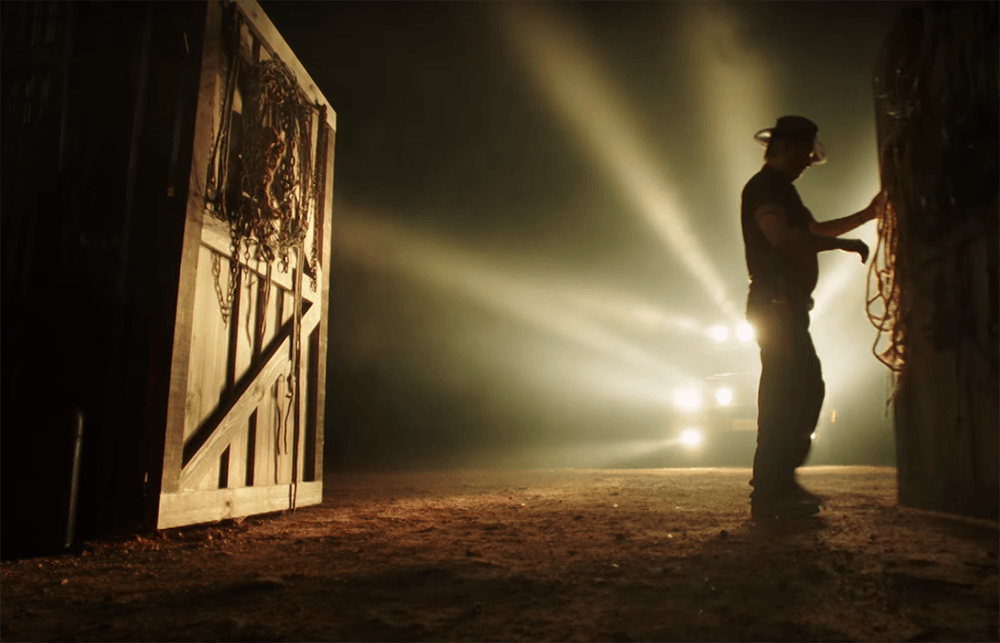 We begin with an American family: mum, pop, son, and daughter, road-trekking across the gorgeous Outback landscape on vacation. The daughter is in her late teens and clearly ostracized from the rest of the family. Typical teen bitch?  No, she actually has a reason to be so miserable. Within minutes after experiencing this lovely family, our Mick arrives on the scene. Cheerful. Helpful. Delighted with the American burger mum cooked up for him. Scenes like this are a real kick for me, knowing that Mick is going to completely fucking massacre these people any minute, but still hanging on the edge of my seat waiting for the moment.

And at a very unexpected point in the scene, the waking nightmare begins. I laughed out loud, just out of the sheer surprise, brutality, and swiftness in Mick’s movement. Hmm. I think he’s done this before. 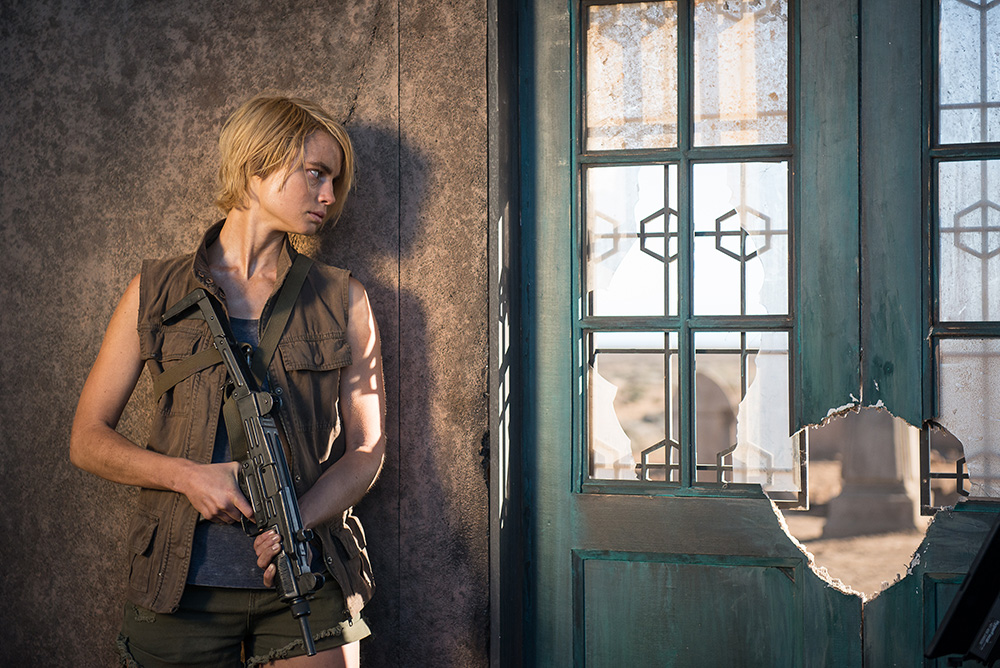 There is a survivor, and over the six episodes she hunts in the seemingly infinite expanses of the Outback for Mick, dry-mouthed and thirsty for vengeance.  Along the way she has both pleasant and unpleasant encounters with fellow desert-crawlers.

The story soon evolves not into a cat-and-mouse game, but more like a cat-and-mouse-and-dog-and-snake-and-multiple hacking and stabbing-and-blazing gunfights-and-cat-and-mouse-and-cat game. There you go, perfect. I described the story for you perfectly, but didn’t surrender a single detail. This game forms a large part of the series, while Mick terrorizing tourists becomes the rest.

I’m really showing off my mastery of the written word and film-critiquing chops when I say this show is badass-as-fuck! 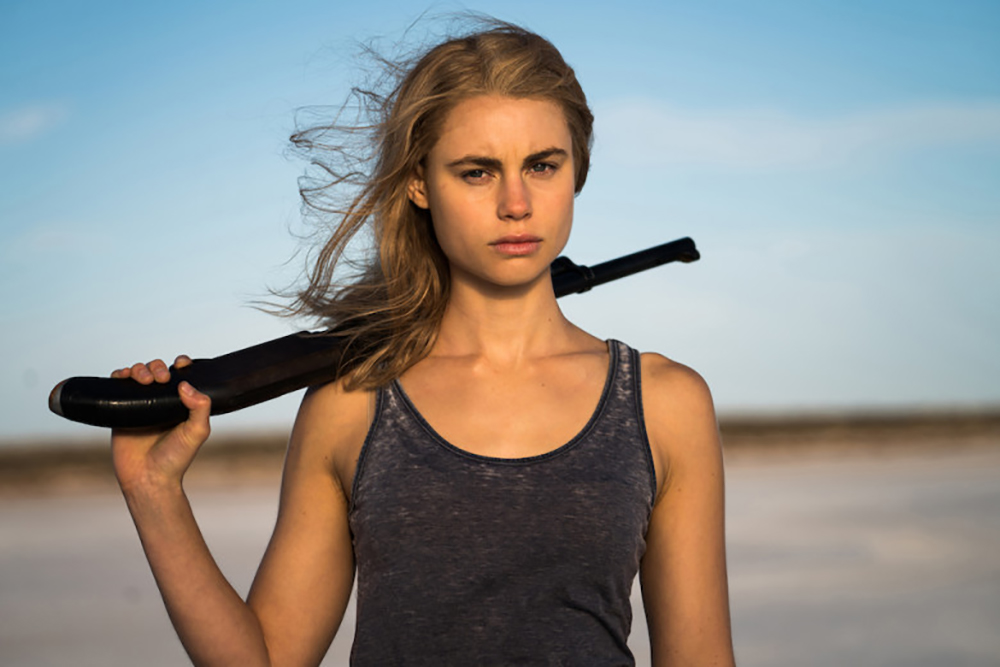 Don’t let the word “series” fool you. In terms of violence, the show is just as unrated/NC-17-level violent as the movies. Perhaps even more violent because since the story is prolonged and has more vile characters, there is more carnage.

You can tell there is a true love of the Outback landscapes from some of the shots. Long establishing scenes of nature, sunsets, and cloud formations punctuate the proceedings and provide the perfect atmosphere, just like they did in the movies. This is another reason why I say this plays out very much like a Wolf Creek 3.

I specifically pounced on this when it became available to review because I love the Wolf Creek movies so much, so it’s possible this review is a little bit biased.  Even so, I think you can figure out whether or not you want to see it. I insist that you do.

*Season 2 is currently in production