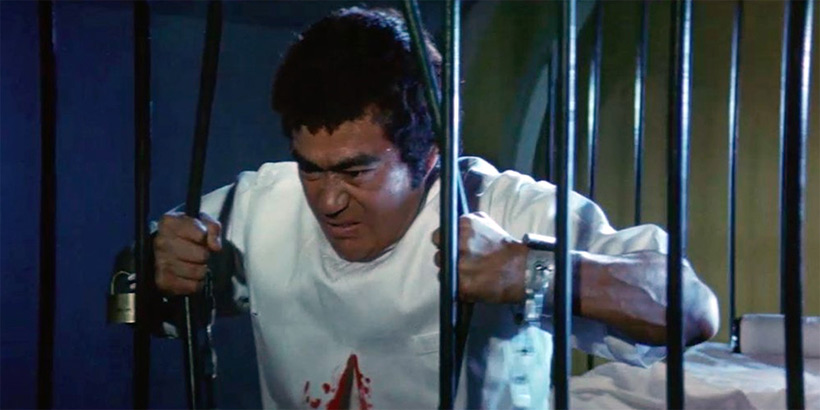 Maybe it’s only a translation quirk, but I appreciate that the trailer for Wolf Guy: Enraged Lycanthrope promises “The Plot Gets More and More Complicated.” That title had been rattling around my brain since I saw the arrestingly pulpy Wes Benscoter painting on the Arrow Video release. Wolf Guy. Even if it is borrowed from a loosely adapted manga of the same name, that title is a work of art. If Norm MacDonald made a werewolf movie, it’d be called Wolf Guy.

Coupled with its premise — a reporter, the last of a lycanthropic tribe, investigates a series of gangland murders by an invisible tiger — Wolf Guy is a tailor made footnote in the unending online quest for The Weirdest Thing. Consider the somehow unrelated Wolfcop — an intentional swing for the gonzo fences that bakes plot, gag, and main character right into the title, and is also available on Shudder. When such a work sells itself on complication of all things, I take heed. 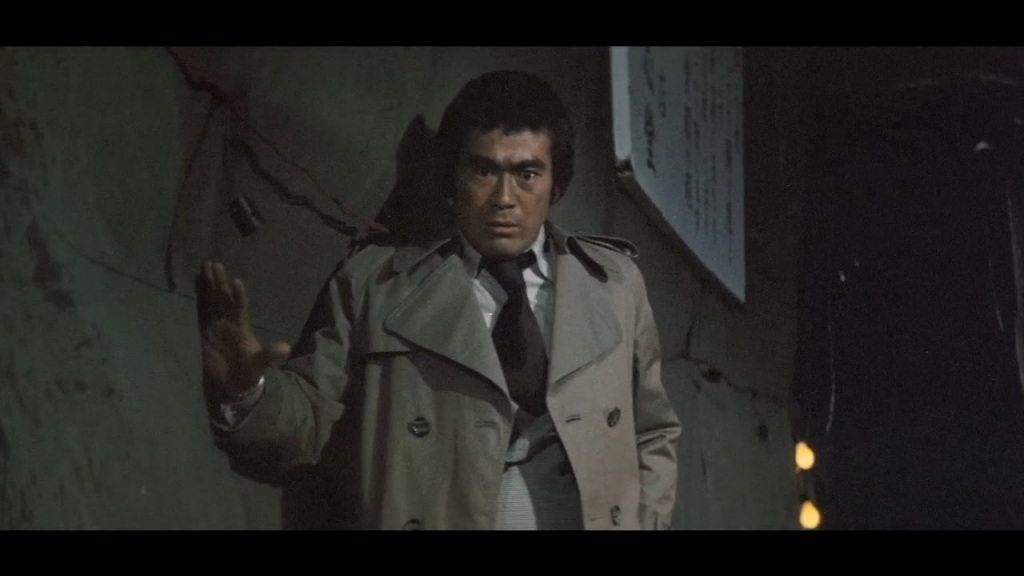 Wolf Guy: Enraged Lycanthrope is not the midnight-movie bonanza that the Internet, judging by a lot of half-hearted recommendations, wanted it to be.

Brush aside the part where he throws quarters like ninja stars and a third act Oedipus complex, and Wolf Guy is an R-rated episode of Kolchak: The Night Stalker where Kolchak himself is a monster. Martial arts legend Shinichi “Sonny” Chiba is Akira Inugami, Wolf Guy and ambiguous journalist. Whether he works for a newspaper or TV station is irrelevant. He’s a reporter with only the cinematic bare minimum of job requirements — righteous curiosity and a knack for being in the wrong place at the right time.

As movie law mandates, someone tells him, “You’re becoming a pain in the ass.” So, when a hysterical gangster runs screaming into traffic, collapses into Inugami’s arms, warns of a woman’s curse, and promptly splits open from a thin-air mauling, Wolf Guy smells a story. As advertised, plot gets more and more complicated, and a simple case of ghost cats spirals into a governmental conspiracy.

Is it weird? Well it’s not exactly mundane, but it’s more grounded than you’d expect.

The early investigations play out in the grainy shadows between headlights and neon. It’s a very different urban sprawl, but there’s some Dirty Harry around the rougher edges. The score from jazz-fusion pioneer Jun Fukamachi, under the name Hiroshi Baba, is Easy Listening by way of Lalo Schifrin, with some borderline prog-rock synth to keep it interesting. His most unnerving music accompanies the opening credits. Electronic cries set to the genocide of Inugami’s clan, shot like a newsreel in mold-green monochrome.

He is the only survivor, holding his mother’s body and patting her back like she might wake up. In a later flashback to the same massacre, she tells her son to avenge his people, as the split-diopter holds them and the curled fingers of a hanging corpse in equal focus. For all his abilities — speed, strength, and complete invincibility on a full moon — the price is untold, unresolved pain. 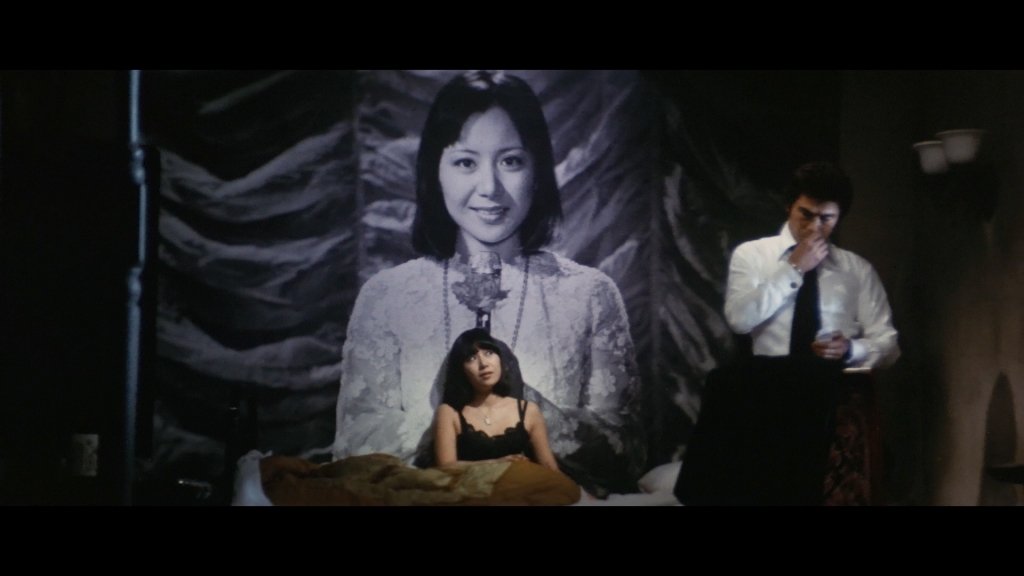 Surprisingly, that’s the beating heart of Wolf Guy: Enraged Lycanthrope. His power is his tragedy, and he senses a kindred spirit with the first attack. “Tonight smells like another bloody incident perpetrated by humanity.” The true killer, as the trailer puts it, is “A Grudge Incarnate!” Every victim dies with the same name on their lips:  Miki  —a lounge singer played to unsettling perfection by Etsuko Nami, reduced to performing in second-rate strip clubs, where the screaming patrons aren’t paying for songs.

“A woman’s nails are the claws of a tiger,” she sings, in front of a butterfly caught in a spider’s web, as men wave their money and demand she take her clothes off. “It is your destiny to die insane.”

Miki is a broken soul like Inugami, but fair warning, her breaking point may be too much for certain viewers. 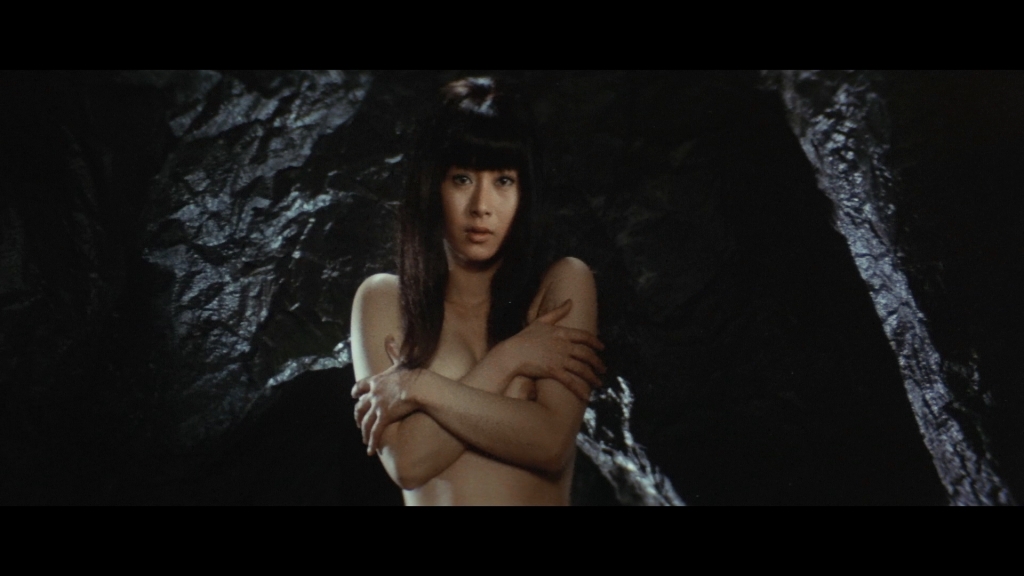 For reasons the movie later makes maddeningly clear, she was sexually assaulted by a paid-off gang. One of them gave her syphilis. Friends and family abandoned her in fear of catching it. Drugs were a way out, until she got hooked and deep in debt to the local kingpin. These impossible murders, which the coroner officially writes off as a demon, are the psychic manifestation of Miki’s collective trauma. Her pain was inflicted by carelessly evil men, and it’s carelessly evil men who try to harness her power. A violent transformation into something incredible, trapped in a killer’s grasp. The butterfly caught in a spider’s web.

This melancholy notion of super powers as a byproduct of suffering, something M. Night Shyamalan just dedicated an entire trilogy to exploring, casts a surprising shadow over Wolf Guy.

The villains eventually try to extract Inugami’s lycanthropic abilities through squeamish stock footage of an actual surgery, in order to forcibly create another of his kind. After a showdown, where the jumps are cross-faded blurs so you know they’re wolf-powered, Wolf Guy 2 keels over from blood poisoning. He hadn’t earned it.

The original posters for Wolf Guy sell it explicitly, pose and all, as a James Bond riff, and that accounts for its clunkier pieces. A strange woman rescues Inugami on a motorcycle and immediately seduces him when they find a place to hide. He pays the price for it later, but a little too much time and nudity is spent on his animal urges.

There’s no explaining the scene where a woman with the same name as his dead mother gets naked and gives him a wistful flashback to childhood breastfeeding. He also tells her, “You give birth to me…you are my mother and also my wife,” in case you were making popcorn during the sex part. It’s a real speed bump in the way of the full-on Terminator finale.