Still Crispy: A Review of “Southern Fried Rat and Other Gruesome Tales” (1983) 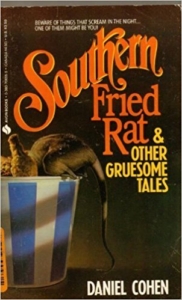 I found the book in the folklore section of the Penfield Public Library, a wonderful library on Baird Rd, in Penfield, NY, that is well worth a visit if you’re in the area. The book is small and relatively thin, weighing in at 128 pages with large print and numerous illustrations (which I’ll return to). When I found the book and saw its delightful cover, I squealed internally. This had been a book that I had wanted to read for some time and, knowing the author and his other work, I had high hopes. 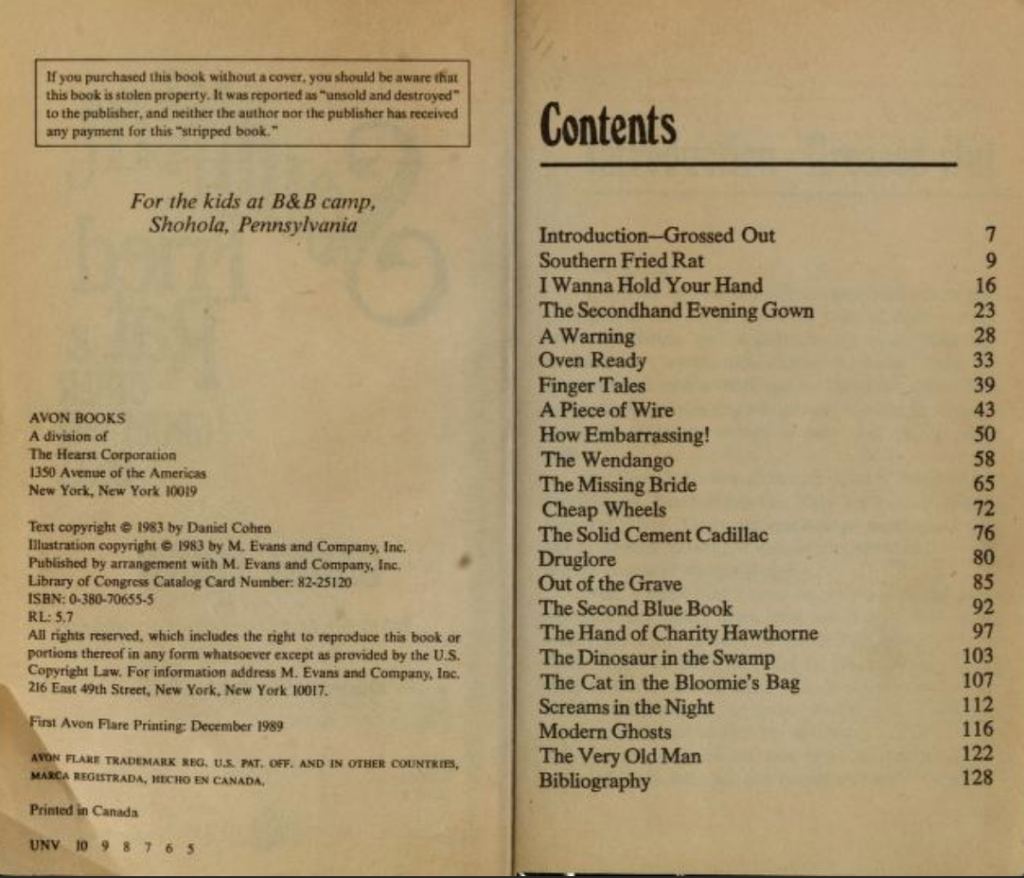 Thankfully I was not disappointed. After I left the library I went home and read the book cover to cover (no great feat to be sure) and found it just as fun (and gruesome) as I had hopped, with a few added things I hadn’t expected.

Namely, I hadn’t expected some of the urban legends included in the book. I expected, and found, the majority of urban legends in the book to be retellings of urban legends, contemporary folklore, that I had read and re-read in numerous other collections meant for juvenile (and adult) audiences, but there were some tales (like “The Dinosaur in the Swamp”, and the first tale in the chapter “Oven Ready”) which really surprised me.

So many other well-trod, yet still fun urban legends could have been added, but were instead omitted for a handful of legends that were not only new to me, but fit well in the book and broke up the more familiar tales retold by Daniel Cohen. 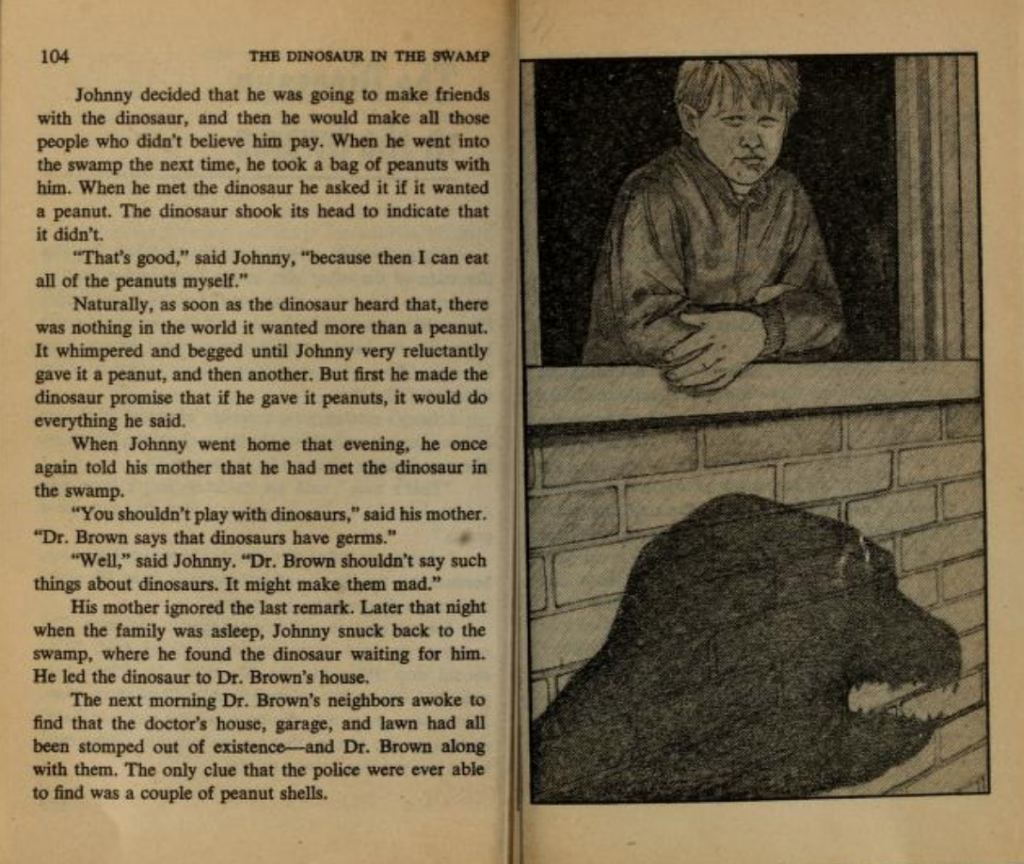 Which brings me to the other tales. As I’ve already mentioned, the majority of the stories in Southern Fried Rat and Other Gruesome Tales are retellings of urban legends almost everybody knows, just told slightly different. But if you’re like me and you enjoy reading and collecting urban legends (like the folklorists credited in this book), you will enjoy the well-known tales in this tiny tome for their slight variations in retelling and cultural hallmarks.

After all, it’s in the slight variations in retelling and the cultural hallmarks of these legends which continue to make them interesting and allow them to spread and seep into the minds (and pages) of our collective consciousness. Additionally, it’s the visual illustrations that these legends are given, be they illustrations in a book (like this one) or colorful acted-out renditions by the oral storyteller that cement these tales in our minds and give them a face. 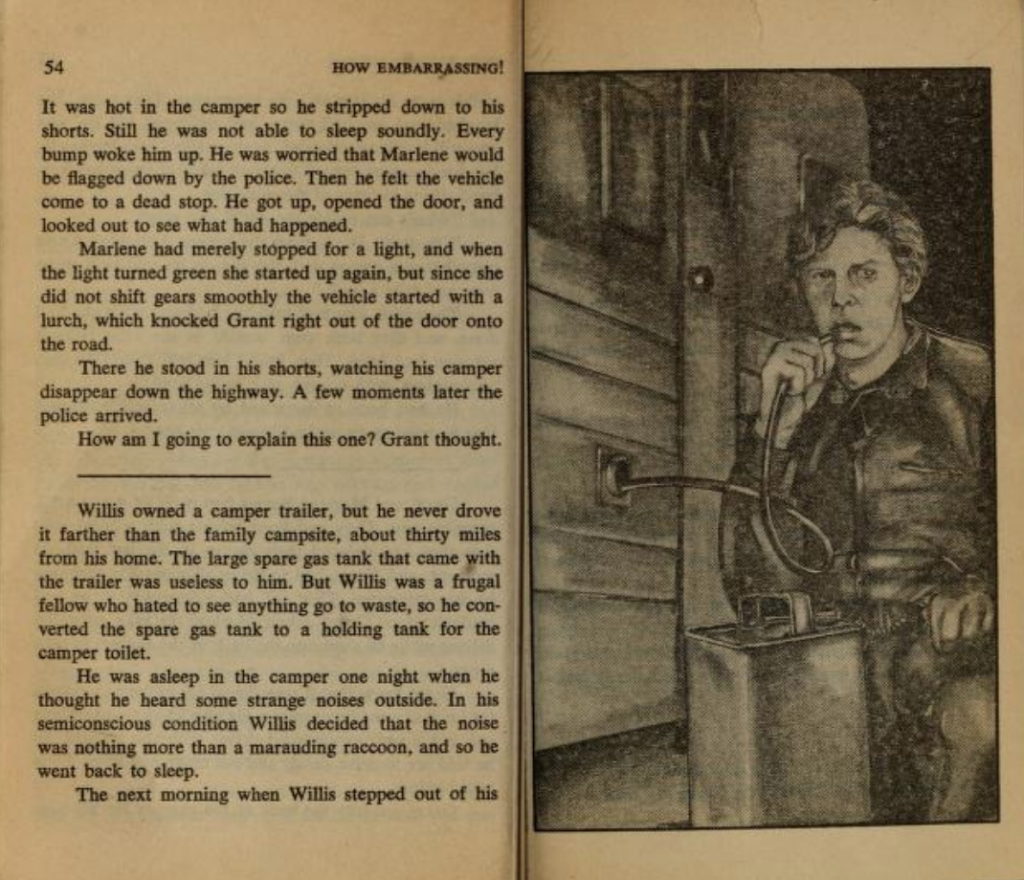 Now, about the illustrations in this book (not including the cover), the ones I promised I’d return to…if there’s one bad thing that can be said about this collection of urban legends by Daniel Cohen it’s that the illustrations suck. They just do. But that’s not uncommon in juvenile books of this size and length published by Avon Flare and other companies during the 1980s. When it comes to buying or borrowing these books, it’s for their rad covers and their even radder written content, not for the illustrations inside (usually).

In closing, if this book sounds like fun to you I highly recommend you go to your public library or local bookstore  and pick it up (or click here to order on Amazon)! It’s funny, it’s gross, it’s creepy and it’s spooky, plus its perfect for ages 12 and up. So if you have a tween or teen who won’t read, this book just might do the trick in persuading them.