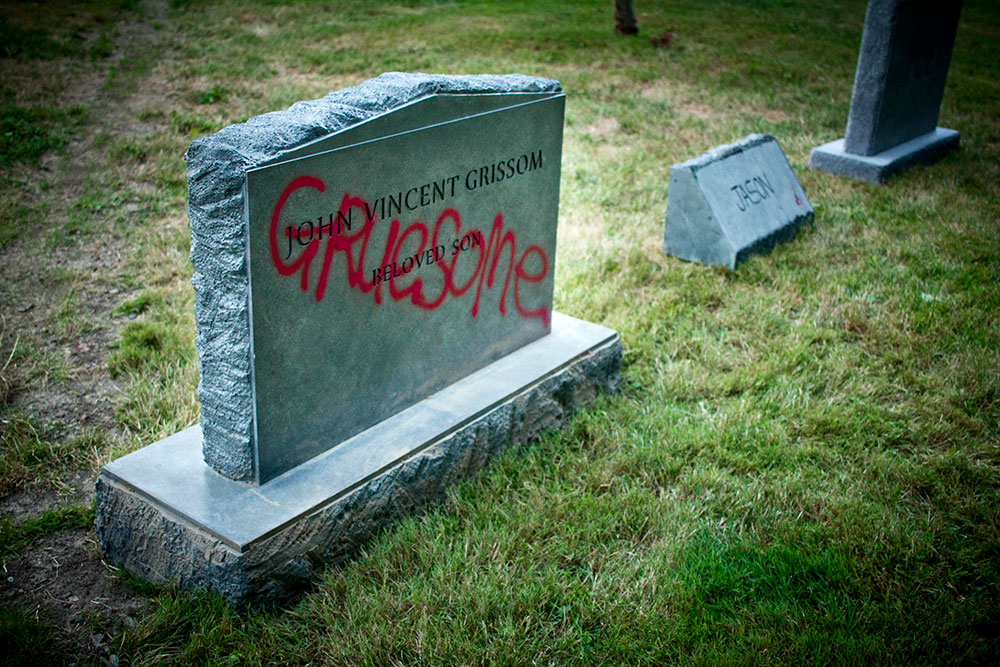 After rebellious high school student Johnny Grissom is murdered during a drunken joy ride, fellow students start getting killed one by one. While the school and town thinks an unknown killer is on the loose, Johnny’s friend Eric begins to suspect Johnny has returned from the grave. But it’s no longer the Johnny Grissom he knew, it’s Johnny Gruesome out for revenge.

What struck me most about Johnny Gruesome was how the film pulled together the best parts of the horror films of the 1990s and eighties.

The film has a manipulative light and breezy feel, like the middle class, suburban high school vibe of the 90s — but it features 1980s staples like wonderfully applied, gory looking makeup and a heavy, guitar driven, Alice Cooper-esque rock soundtrack. Add in Johnny’s black and loud flaming skull painted car, and Johnny Gruesome is a winning mix of fondly looked upon times in the horror genre.

Writer and director Gregory Lamberson has always known how to effectively blend subtle humor with horror, and Johnny Gruesome is no different.

There are plenty of funny moments in the film that jive nicely with the vengeful, dead teenager walking around on screen. One such scene shows a freshly risen Johnny stumbling across the screen in the background while 2 gravediggers shoot the shit, talking about the weather and drinking beers waiting to cover the grave. Johnny’s friend Gary (Chris Modrzynski) is very funny as he nonchalantly discards a human head he finds in his locker. His character is a nice balance between the conflicted Eric (Byron Brown II) and Johnny’s mourning girlfriend, Karen (Aprilanne).

A lot of the success of ‘Johnny Gruesome’ lies on the shoulders of star Anthony De La Torre as the title character, Johnny Grissom, aka Johnny Gruesome. With his tall, thin frame and long hair, De La Torre embodies the perfect look of a black clothed, rebellious high school teenager with an attitude. The makeup application on De La Torre, as Johnny continues to further rot after rising from the grave, is expertly done by Craig Lindberg — giving Johnny an appearance that reminded me of a more twisted illustration from the ‘Scary Stories to Tell in the Dark’ books.

Everything about the character works, and I give a lot of credit to De La Torre.

Another standout performance is Byron Brown II as Eric, the conflicted friend who was unwillingly swept up in the cover up of Johnny’s death. He works his way through the film, constantly bothered by the death of his friend. We can see he is struggling to do the right thing. Brown does a great job showing how uncomfortable and ashamed he is being involved in what happened and, as the story unfolds, he gains the sympathy of the viewer.

While seeking his revenge, Johnny shows no mercy on those who killed him or wronged him. He successfully earns his nickname of Gruesome as he brutally kills his fellow classmates in bloody and violent ways, the best of which involves a popular jock and a basketball hoop.

There may not be many scary moments in Johnny Gruesome, but it’s a quickly paced and fun supernatural revenge flick that has a great soundtrack, excellent makeup and perfectly cast characters with personalities.

With the DVD following in January, Johnny Gruesome hits VOD on October 16 and will make for a good night of Halloween movie watching.