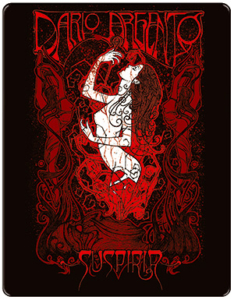 November brings a very special occasion in horror, specifically the single most dreamt-of and personally satisfying moment I will ever experience as a horror fan:  Synapse releases a brand new 4K remaster of Suspiria on Blu-ray. Up until this point, Suspiria has never before been experienced through such a high level of clarity and fidelity.

During the remastering process, Synapse has had to deal with cranky and demanding fanboys, running-time rumors, and confusion about what studio owns what version. It is such a beloved and eagerly-awaited title that they occasionally post images of the restoration progress on their Facebook page. This is such an important and worshipped horror movie! I would venture to say that the only two horror movies that might possibly top it in terms of legendary, influential status are Night of the Living Dead and Psycho.  The fact that it isn’t as widely known as those two films doesn’t mean shit.

I remember seeing Suspiria for the first time back in the late 90s.  I discovered a tiny video store, which seemed to randomly sprout like weeds from a cracked and blighted gas station parking lot in Wilkes-Barre, Pennsylvania. The store, both inside and out, bore more than a passing resemblance to the video store in the movie Lightning Bug. The only really big difference was that in Lightning Bug a Goth-soaked, heart-melting Laura Prepon was behind the counter. Sadly not so at Wilkes-Barre’s Full Moon Video.

But what the store lacked in sultry ginger actresses it more than made up for in horror movies. The store was a local legend. That’s where I rented Suspiria for the first time. I also discovered, among many others, Deranged, Fulci’s zombie movies, Dead Alive, Leif Jonker’s Darkness, Tim Ritter’s Truth or Dare movies, Burning Moon, and the death metal-driven Traces of Death movies.

Those of you who have seen Suspiria and love it know exactly the kind of witchy spell it casts.

The kills, the rich colors, the Dali-esque interiors of the dance academy setting. We all know the stories: how Argento was so confident in what he was creating that he and Goblin composed portions of the score before filming began, so he could play it for the actors to create the specific atmosphere he wanted. That was a brilliant tactic, because even though it is essentially non-diegetic music, it seems to drift between diegetic and non-diegetic, as if there are times when we and the characters are both haunted by the music and the sounds of otherworldly ghosts whistling black magic doom.

We know Argento was inspired by the fairy tale Snow White, and there are tiny details and tricks in the film that indicate that maybe – just maybe – we are watching a horror re-telling of that classic tale: the raven-haired heroine, the hissing coven of witches, the poison food, the dance academy replacing an enchanted forest, the oversized inner spaces that make the actors seem like children, that broomstick blood stain on the floor!  We ignore, or perhaps even enjoy, the complete abandonment of common sense in favor of dream-logic and horror (the barbed-wire room, for instance).

And we all certainly know all about the post-production coloring process. Argento and director of photography Luciano Tovoli employed an ancient and painstaking Technicolor coloring process that exquisitely saturated all the blues, reds, and greens. Basically, they re-colored the negative by hand. This was to embellish and embody the effect of chaotic, violent, and uncontrollable magic.

That opening, when we are bombarded by the roaring timpani, synthesized howling, and that oddly familiar xylophone melody (which is actually the children’s tune “Jesus Loves Me, This I Know, Because the Bible Tells Me So” down-tuned to a flat key in order to pervert it and make it scarier). Once heard, it will forever own a portion of your nightmares.

From the onset, there is no doubt that you are in a different world. A world of claustrophobic shadows, long hallways, sinister cackling, unusual footsteps, burning reds, soul-freezing blues, toxic greens, with the black queen Mater Suspiriorum (Our Lady of Sighs) holding court over all.

I am a crazed and passionate fan of this movie. Perhaps even more than simply a fan. I’m a student of Suspiria, and a disciple. Yes, it’s fair to say that I worship Suspiria. Last month, Eightyfour Entertainment, a German label, released their own 4K remastered 40th Anniversary Leatherbook edition of Suspiria that has nothing at all to do with the upcoming Synapse release. It is a 3-disc set packaged in a stunning leather and wood slipcase. Shiny letters, intricate wood etchings, an 84-page booklet, a poster, and a collection of postcards are only a few of the things included in this set. It cost well over $100, and I bought it without hesitation.

It’s a region 2 set, so sadly it isn’t playable on American disc players.  Fortunately for me, I have a multi-region DVD player, and a DVD version of the remaster was included in the package, so I got to at least get a hint of what a Blu-ray restoration would look, sound, and feel like. 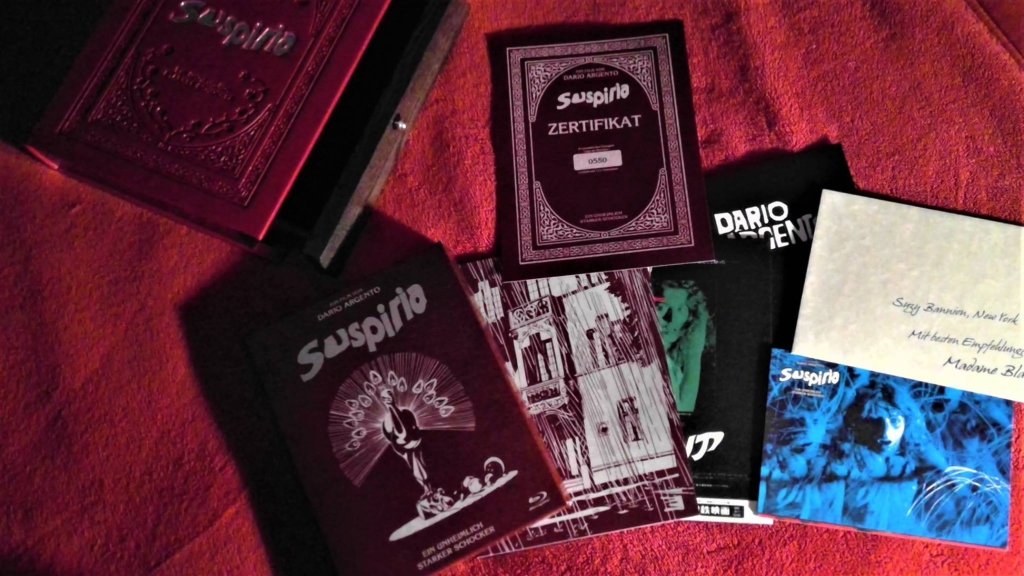 It was glorious!  The floor shook, and the picture bled out of the screen. I can tell you firsthand that we are all in for a real treat!

So, whether you are a longtime fan or a first-time viewer, I recommend highly that you purchase or, better yet, preorder the Synapse release (so far slated for November, but an exact date has yet to be announced). I know to some of us “Disney” is a dirty word, but if Walt Disney made mean-spirited, old-school, twisted Grimm fairy tale horror movies, they would be like Suspiria. Fall under the spell! 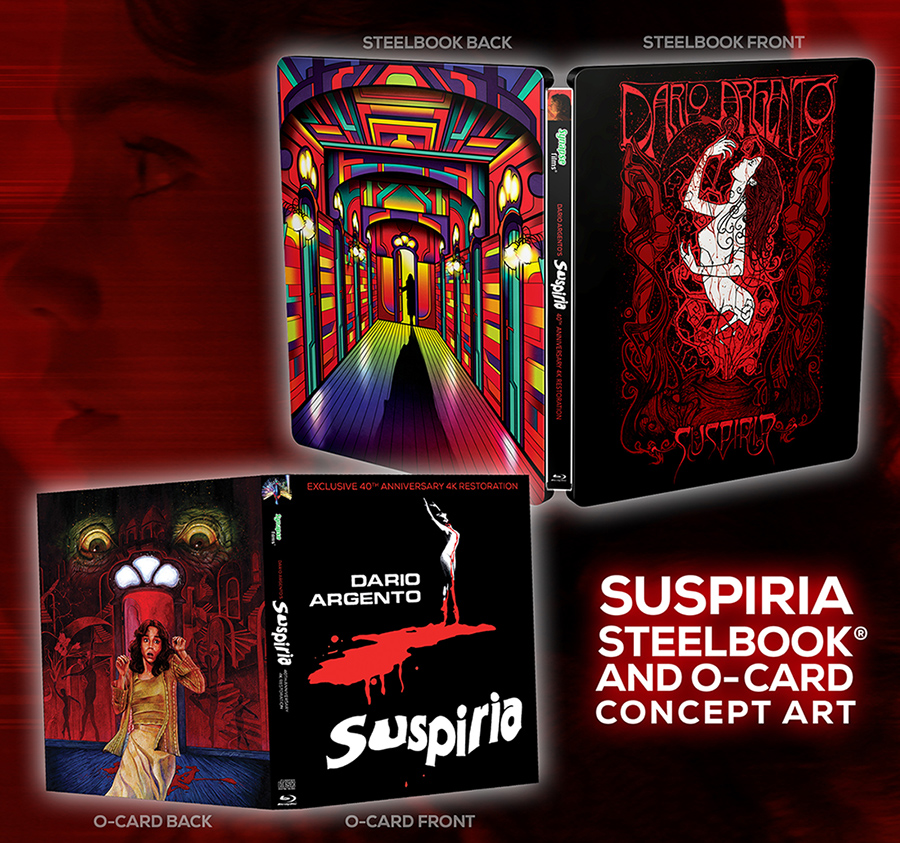