Talking With the Dead: Barbie Wilde

Talking With The Dead: 13 Questions for Actress and Writer Barbie Wilde, Iconic Female Cenobite And Writer of “The Venus Complex”

Exhumation: (n) the act of digging something out of the ground (especially a corpse) where it has been buried.*

Barbie Wilde is best known as the Female Cenobite in Clive Barker’s classic cult horror movie ‘Hellbound: Hellraiser II’. She has performed in cabaret in Bangkok, Thailand, robotically danced in the Bollywood blockbuster, ‘Janbazz’, played a vicious mugger in the vigilante thriller ‘Death Wish III’ and appeared as a drummer for an electronica band in the so-called “Holy Grail of unfinished and unreleased 80’s horror” ‘Grizzly II: The Predator’, a.k.a, ‘Grizzly II: The Concert’, which starred a then unknown George Clooney. She was a founder member of the mime/dance/music group, SHOCK, which supported such artists as Gary Numan, Ultravox, Depeche Mode and Adam & the Ants in the 1980s.

Barbie presented and wrote eight different music and film review TV programs in the UK in the 1980s and 1990s. She interviewed such pop personalities as Cliff Richard, Iggy Pop, John Lydon (AKA the Sex Pistol’s Johnny Rotten), The Sisters of Mercy, Roger Taylor of Queen, Pepsi & Shirley, The B52’s, Lisa Stansfield, Jimmy Sommerville and Black, as well as actors Nicolas Cage and Hugh Grant.

In 2009, Barbie contributed a well-received short story, entitled ‘Sister Cilice’, to the ‘Hellbound Hearts’ Anthology, edited by Paul Kane and Marie O’Regan. The stories in ‘Hellbound Hearts’ were based on Clive Barker’s mythology from his novella ‘The Hellbound Heart’, the basis for the Hellraiser film franchise. In 2011-12, Barbie contributed three more short stories to three different horror anthologies: ‘U for Uranophobia’ for ‘Phobophobia’, ‘American Mutant: Hands of Dominion’ for ‘Mutation Nation’ and ‘Polyp’ for ‘The Mammoth Book of Body Horror’.

Barbie’s first novel, ‘The Venus Complex’, a fictionalized diary of a serial killer, was published by Comet Press on the 1st of November, 2012.** 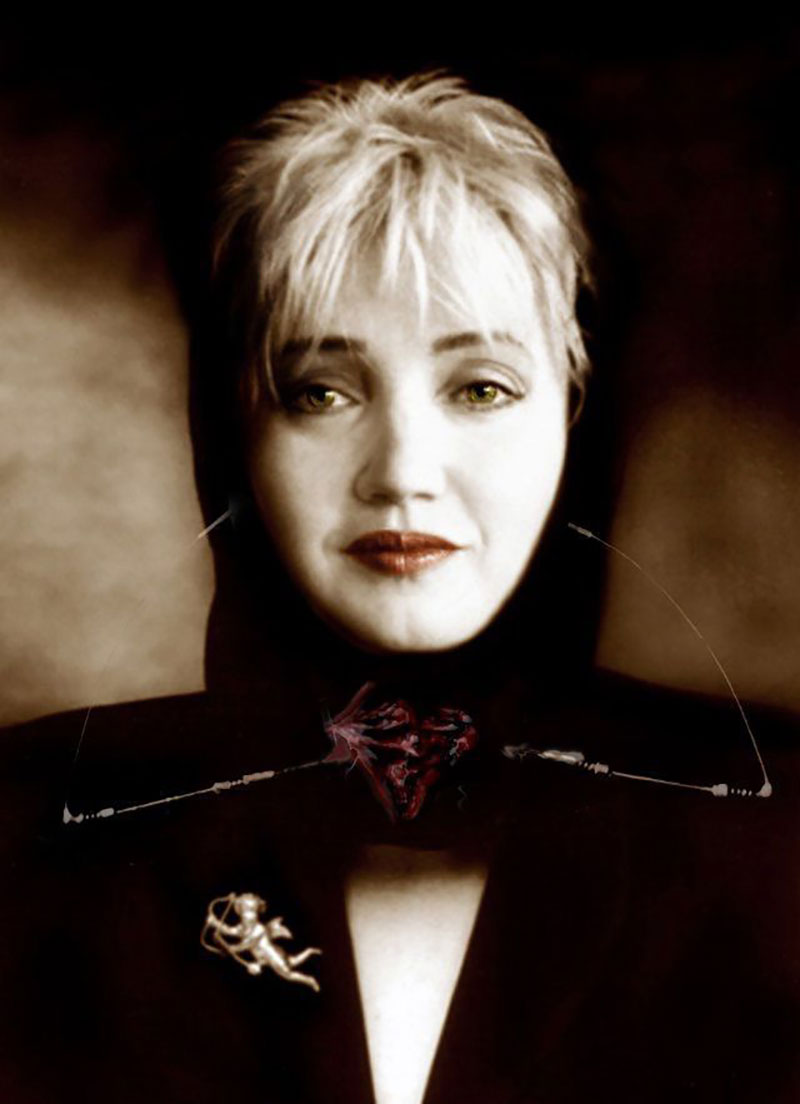 1. The role that you may be the most famous for is as the Female Cenobite from Hellbound: Hellraiser II. The hardcore fans know that in the original film, the Female Cenobite was portrayed by Clive Barker’s cousin, Grace Kirby. Can you tell us a bit about how you got involved with Clive and the film, what persuaded you to take up the role, and what did you try to bring to the role to make the character yours.

Since Grace didn’t want to reprise her role, the casting director for Hellbound, Doreen Jones, called my agent and I went up for the audition. I think that at the time, directors and producers thought that mime artists were better suited for acting with prosthetic makeup and masks, and I was a classically trained mime artist as well as being an actress. I was a bit reluctant, as the first film had made a pretty weird impression on me. I also thought that I was going up for the Chatterer, and I disliked mask work. I was quite relieved when I found out that I was auditioning for the Female Cenobite! I met with the director, Tony Randel, we chatted about the part, and I got the role.

As far as preparing for the role, I read “The Hellbound Heart” (Clive Barker’s novella and the source material for the Hellraiser films). It’s such a wonderful and imaginative story. And the whole transformation makeup process that I had to go through every day also helped. The first time I saw myself in full makeup was pretty startling, but knowing that you looked like a demon really assists in building your character. 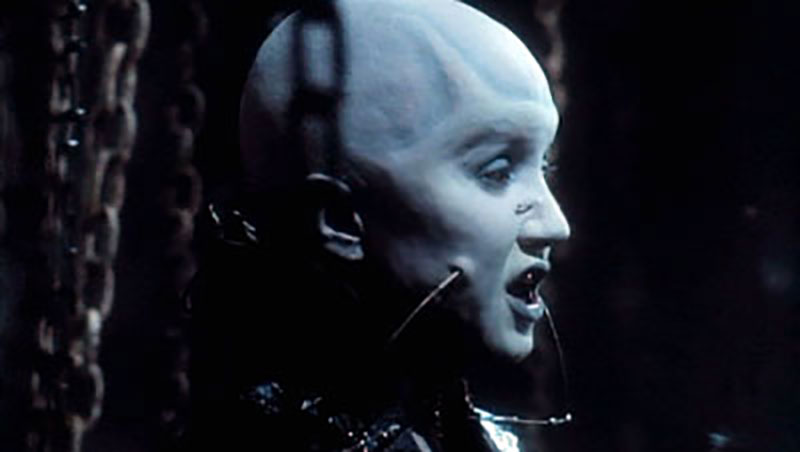 2. Like the other Cenobites, she wears black leather and is mutilated yet still stunning. In Hellraiser, several wires peel back the skin around her neck and exposeher throat, causing her to have a rough and low voice. She has deeply sunken facial features with bluish skin and a few hairs left on her head. In the sequel, four of the wires holding her throat open have been removed, leaving just one frame, and her skin tone is made white with no hairs on her head. Can you tell us why the Female Cenobite’s make-up was changed, how long did it take to apply and considering the nature of the Cenobites and what they do, why didn’t they stick with the “Deep Throat” nickname?

Grace Kirby and I were very different facially, so many of the changes to the design of the makeup were inevitable. Again, since we were so different, they felt that my “throat jewelry” had to be different too.

Ah, that pesky nickname! In the first Hellraiser film, Pinhead was actually called Lead Cenobite; the Chatterer was called Chattering Cenobite, etc. By the time Hellbound rolled around, the nicknames that the makeup crew had used during the filming of the first film had stuck, so the names Pinhead, Chatterer and Butterball were used in the credits. Unfortunately, my character’s nickname was Deep Throat (for obvious reasons), and that name was deemed too rude to be used in the credits, especially in the United States. 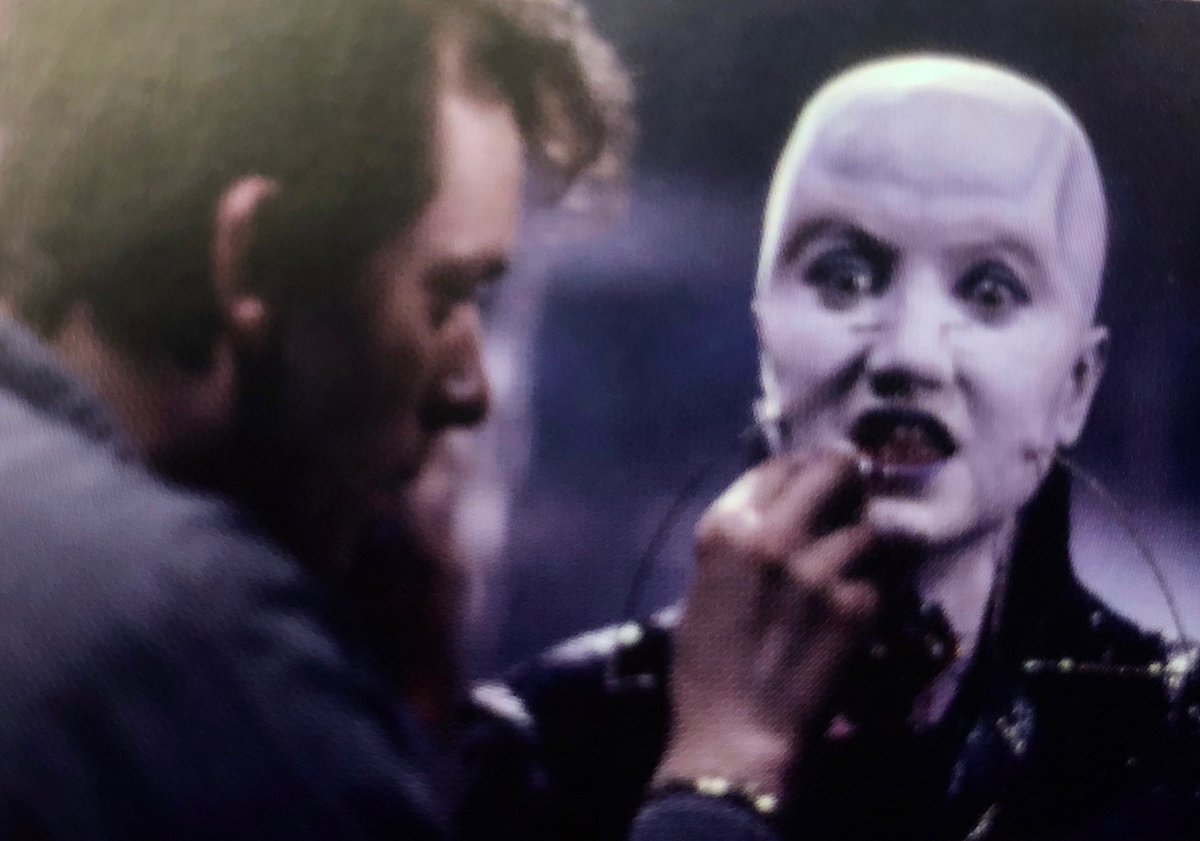 3. According to the Hellraiser Wiki “Sister Nikoletta was a nun who was very interested in sin, regardless of her spiritual upbringing. Soon it was all she desired and it made her obsessed. One day a man looking for a place to stay gave her the Lament Configuration after sensing her desires and sinful nature. Once she opened the box the Grillard cenobite came and took her to Hell where she indulged in her sinful pains, pleasures, and desires. It has now been suggested that her name is “Falln”. She of course, became the Female Cenobite. What are your thoughts on the character, did you and Clive ever talk about her history and did the character help to influence your writing in any way?

I only discussed my character once with Tony Randel, as Clive was Executive Producer on Hellbound. I asked Tony what my motivation was, and he answered “You’re dead.” So… that was that… To be perfectly frank, I didn’t even consider a back story for the Female Cenobite at the time. The idea that the Female Cenobite was a nun came much later from Gary Tunnicliffe, who was the makeup artist on some of the American sequels to Hellraiser, so it’s a fairly recent development.