An exclusive chat with filmmaker Ted Geoghegan, writer/director of the indie horror hit We Are Still Here, talking about his remarkable new film Mohawk. 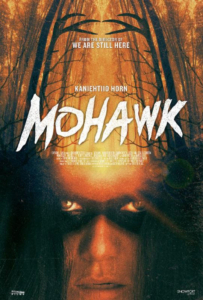 There’s something special about Ted Geoghegan. He exudes a passion for filmmaking that is infectious and has an impressive knowledge of movies, while remaining easy and enjoyable to talk to. I’m sure his day job as a film publicist helps facilitate this demeanor, but it seems genuine and innate, as if no matter what, this love of movies and storytelling would surface.

I recently had the pleasure of chatting with Geoghegan, discussing his latest film Mohawk, a bloody genre blending race for survival in the woods of New York during the year of 1814.

In 2015, Ted found worthy success with his debut film We Are Still Here, a frightening and effective addition to the Haunted House sub genre which delighted both fans and critics. It was a creepy, atmospheric tale played out wonderfully by its cast (including the legendary Barbara Crampton and Larry Fessenden), and it perfectly utilized the practical effects wizardry of Oddtopsy FX, supervised by Marcus Koch. 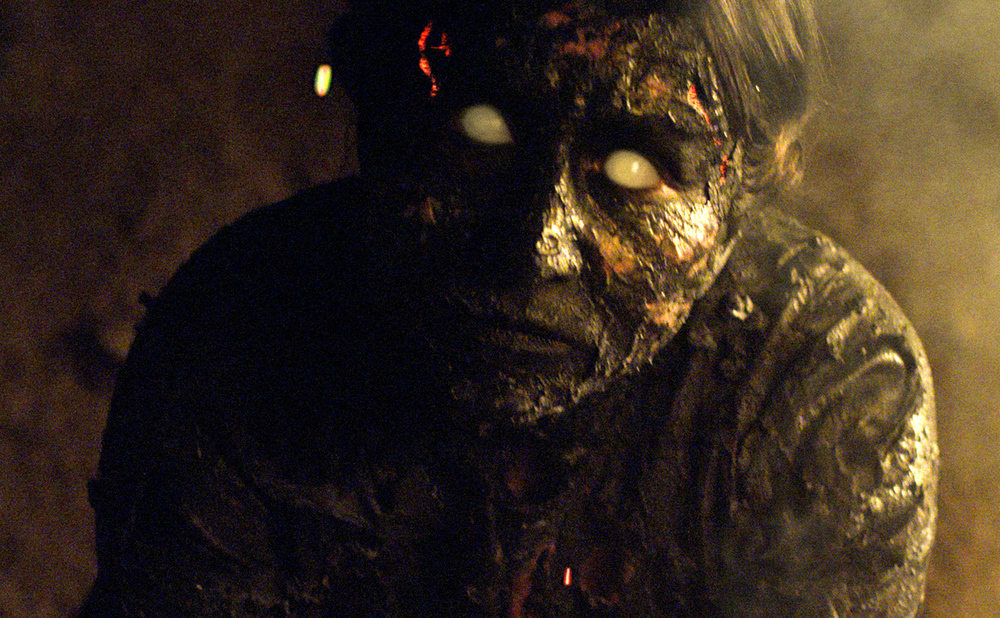 But for his sophomore effort, Geoghegan radically switches gears and presents a film difficult to pigeonhole. Both himself and co writer Grady Hendrix (best selling horror author of My Best Friend’s Exorcism, Horrorstor) seem to reach out of their ‘normal’ box of tricks and pursue the need to tell a story very relevant to the times — despite being set over 200 years ago.

Immediately, Mohawk shakes any preconceived notions about itself, with a rad opening credit sequence that gave me an Escape From New York vibe via the synth heavy soundscape, that surprisingly continued to help appropriately set the tone of the movie.

“New York, 1814.  The Revolution has left a scar across this New World that will not heal…”

The new war between the Americans and Great Britain is escalating, and the native Mohawk have remained neutral. Time has come though, for the fleeting tribe to choose a path for themselves. Three souls have connected with each other: Oak (Kaniehtiio Horn) and Calvin Two Rivers (Justin Rain), who are both Mohawk, and Joshua (Eamon Farren), their British companion. The three find themselves in a dire situation.

Impulsive actions and miscommunication help incite a band of aggressive American soldiers to seek revenge, tracking the trio through the lush woods of New York. The already anxious and uneasy relationship between the White Man and the Indigenous people of the North American continent came to reach yet another threshold during the War of 1812. This is where our story of the two groups bleed together in more than one sense.

It is a relentless trek through the forest, where we see real horror with real monsters. 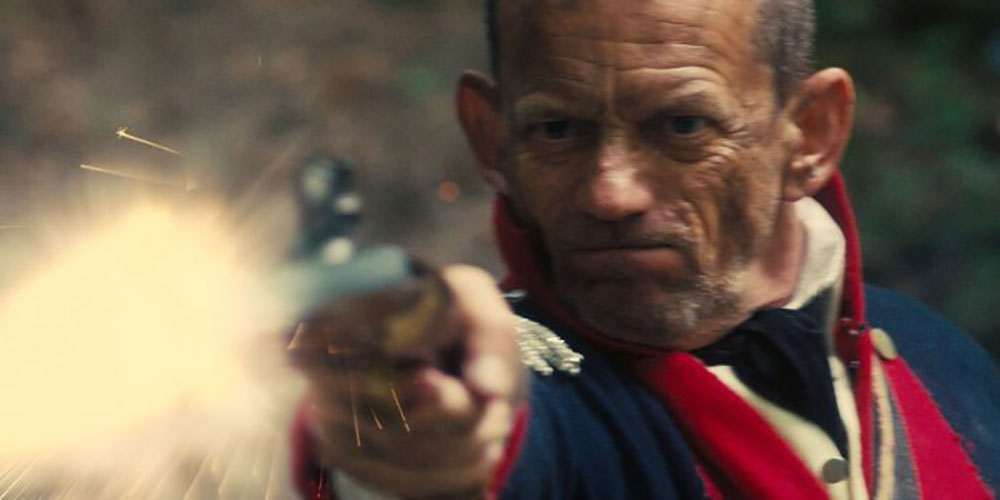 The members of the American regimen are brutal and determined to slaughter any and all who they come across, but Oak is resourceful and resilient. The film, written by two White guys, does little to hide the fact who the real aggressors are, especially with lines like, “It’s my experience that it’s the White Man that does the scalping.”  Mohawk can serve as a cautionary tale, reminding us of the atrocities that happened on this continent during the early years of the 19th Century.

Both Dark Sky Films and Snowfort Pictures wisely decided to help Geoghegan make both of his features. He is a talented filmmaker that strives to satisfy those fans of elevated genre that want something worthwhile, different, and significant.

I highly recommend you give Mohawk (now available on VOD) and it’s message your time and consideration. 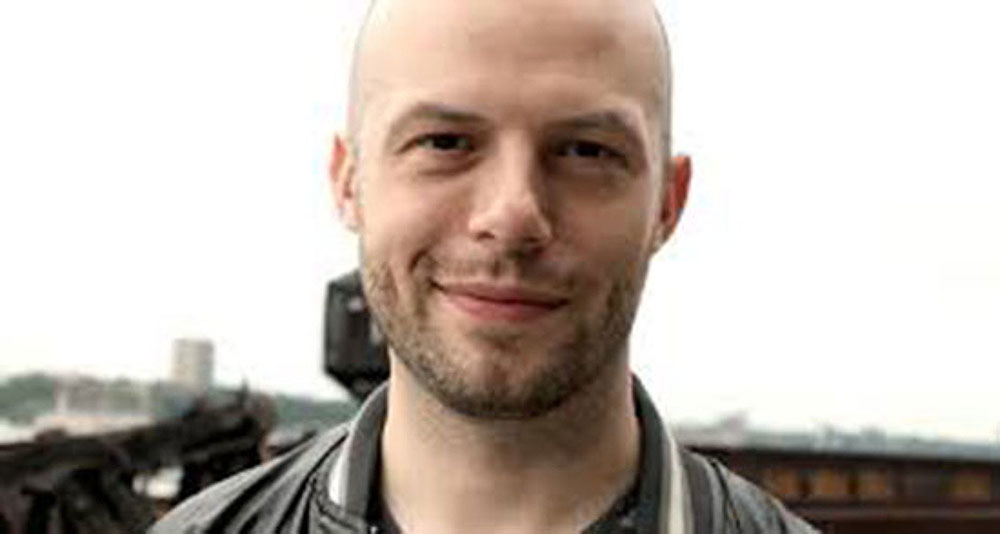 Danni Darko: Hi, Ted. Thanks so much for chatting with me. Let me start by saying that I just watched your film Mohawk, and I was really impressed. In my opinion, the War of 1812 is kind of a forgotten war in American history, despite its importance. What prompted you to share this story?

Ted Geoghegan: So when I moved to NYC ten years, I was really surprised by the lack of native people I would see on the streets.  I had grown up in rural Montana and was constantly around Native and indigenous people, so I found myself quite surprised that I wasn’t seeing a lot of them in NY.  What I did notice, however, were these signs on virtually every major building that would say “Made with Mohawk construction” or “Built with Mohawk iron”. I was really curious as to what that was about. 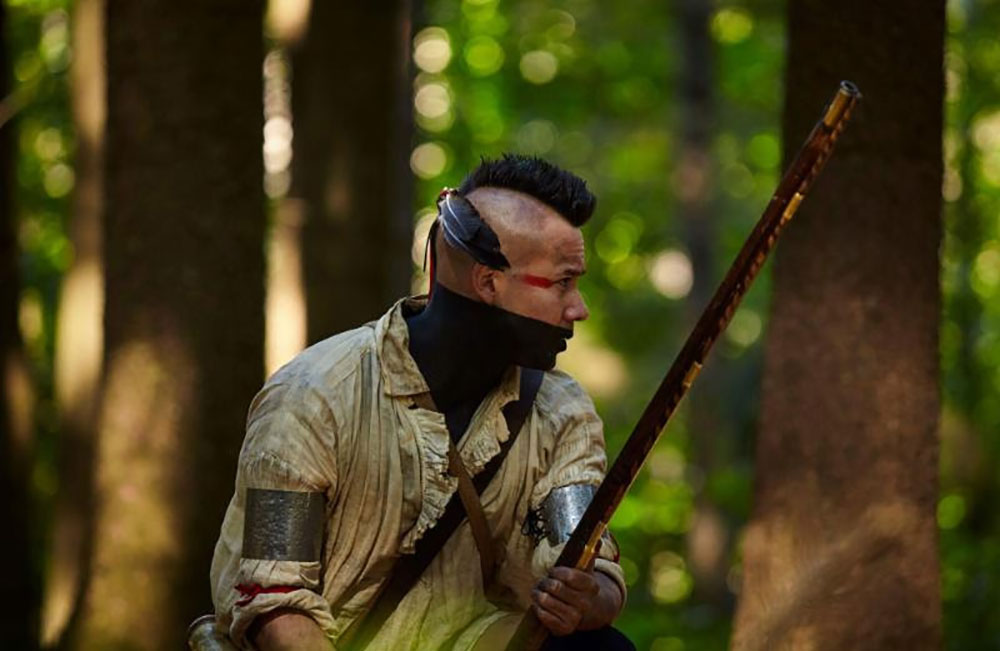 You know, growing up, the word Mohawk really was only about a haircut. While I was aware the Mohawk were a Native people, I knew very little about them, and I thought perhaps I should broaden my horizons and learn a little bit more. So I decided to study the Mohawk people, their past, what they’ve been through, and what they are currently going through. I kind of filed it away in the back of my head as something I may at some point in the future want to tell a story about.

I of course went on to write a bunch of other things and ultimately made We Are Still Here about four years ago. But after We Are Still Here, the idea of doing something really really different was very exciting to me — and the opportunity to tell this story, I felt, would be something that would be a really good juxtapose to my previous film.

So, I teamed up with a very near, dear friend of mine, Grady Hendrix, who is a best selling horror author…who tends to lean more into horror comedy.

TG: Yeah! I don’t know if you’ve had a chance to read My Best Friend’s Exorcism or Horrorstor….

DD: I have, and I think Grady is very witty.

TG: He very much is, and I feel some of the most charming dialogues in Mohawk came straight from his pen. But Grady surprisingly is a scholar of the War of 1812 and knows a massive amount of information about it. So we took this opportunity. We can’t think of a better chance to do this, so we starting writing the film.

With both of us being quite political, we were eager to tell a story about a marginalized people and what was happening to these folks at the dawn of our Country’s birth — and mirror that to what’s happening now.

Thankfully, Dark Sky and Snowfort, the producers on the film, were also keen on the idea. And given the fact that at that point, the campaigns were underway for the election, we knew things were rather dire. We felt that there was no better time to tell this story. We sat down, and we wrote something that we felt really resonated with us. And hopefully the film echoes that passion in that respect.

DD: I believe it does. I grew up in NJ right outside of NYC, and I remember asking myself the same thing in regards to the number of indigenous people, despite the numerous towns, rivers, and so on th