Alex DiVincenzo‘s new short film, the horror comedy Trouser Snake, will be making its world premiere at the prestigious Boston Underground Film Festival (BUFF) on March 24 at 5:30 pm at the Brattle Theatre in Cambridge, MA. The comedic spoof, which pays loving tribute to creature features of the ’50s, will be playing as part a curated showcase of locally-produced shorts from up-and-coming filmmakers. 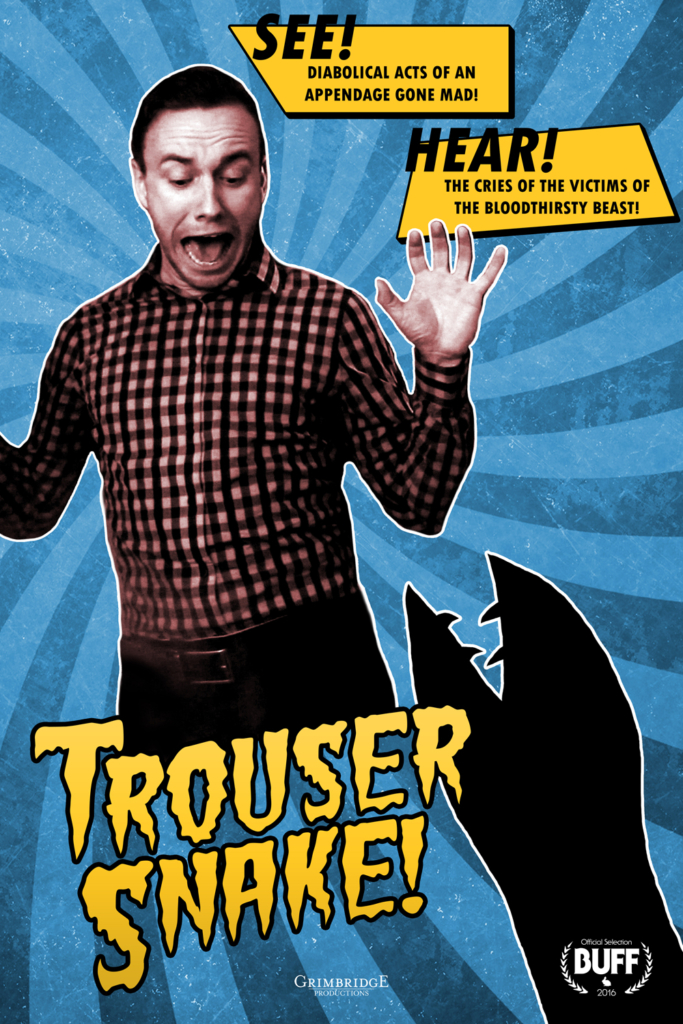 DiVincenzo’s film, which he co-wrote with composer James Cilano, should be right at home in the festival known for showcasing delightfully twisted and groundbreaking films from the genre’s most subversive and talented independent filmmakers. His previous effort,  The Horrors of AutoCorrect, was distributed by Eli Roth’s Crypt TV.

Although he’s relatively new to writing and directing, Alex has already amassed an impressive body of work in film, with credits ranging from cinematographer, visual effects, art department, composer, actor, costume and wardrobe, camera and electrical department, and even ten producer credits. He clearly knows his way around a set, and his extensive production experience is evident when watching Trouser Snake.

At just under 5 minutes, the short is a fast and fun watch. However, even with the brief running time, DiVincenzo manages to showcase some rather impressive technical skills and expertise behind a camera, teasing his tremendous promise as an up-and-coming indie filmmaker.

Alexander Gauthier, Jamie Lyn Bagley, Michael Thurber, William DeCoff, Monica Saviolakis, Morgan Walsh and Jordan Pacheco star in this witty short involving a night of necking at Lovers’ Lane that gets the shaft when a monster rears its ugly head.

The 18th annual Boston Underground Film Festival takes place March 23-27. Along with Trouser Snake, the line-up includes Chasing Banksy, The Lure, Kill Your Friends, Trash Fire, Antibirth, Curtain, a live performance of Stand By for Tape Back-up, and a 35mm screening of Wendigo presented by Larry Fessenden, among others.

“I’m so excited to be returning to BUFF for the Trouser Snake premiere,” comments DiVincenzo. “It’s my favorite film fest, and I’m very grateful to have my silly short playing alongside so many respectable movies.”

Trouser Snake will debut online in the spring following its festival run. Visit Grimbridge Productions on Facebook for updates.