“Braid” is an insane, female-driven, mind f*ck that doesn’t make much sense but still manages to be essential viewing.

This month’s Tubi recommendations will honor horror films directed by women as part of the annual Women’s Month.

This week’s Tubi Tuesday is patently insane, there’s really no other way to explain it. It’s classified as psychological horror. And that’s fairly accurate, as watching it and trying to figure out what’s going on will cause a psychological break.  Get ready for 2017’s Braid.

Since 1977, Nobuhiko Obayashi’s Hausu has been waiting patiently for any horror film to come along that could even remotely be considered as a pairing for a doubleheader. After 40 years, Mitzi Peirone and a couple of friends pulled together $1.7 million in cryptocurrency to fund Braid and finally give Hausu the viewing partner it needed.

Much like the cryptocurrency that funded the film — in fact, this is the first film in history funded entirely by cryptocurrency — it makes no sense, and anyone trying to explain it to you just sounds like a madman.

The film follows a pair of drug dealers, Petula and Tilda, who get robbed and have two days to pay back their supplier “or else”. On the lam, the pair decide to hide away with their childhood friend Daphne who lives in a huge mansion because they plan to rob her. Problem is, she’s batshit crazy and forces the pair to play in a childhood game of pretend that the trio has been playing since childhood.

This is about everything that is clear in the film.

Everything other than this is a wild ride with alternate realities, alternate timelines, and imagination portrayed as reality. And it should also be mentioned that all the characters are either high as hell, crazy as hell, or both.

Tilda gets her knee smashed, Daphne slashes Petulas’s face, and the trio murder a cop when he arrives and tries to save Tilda and Petula. 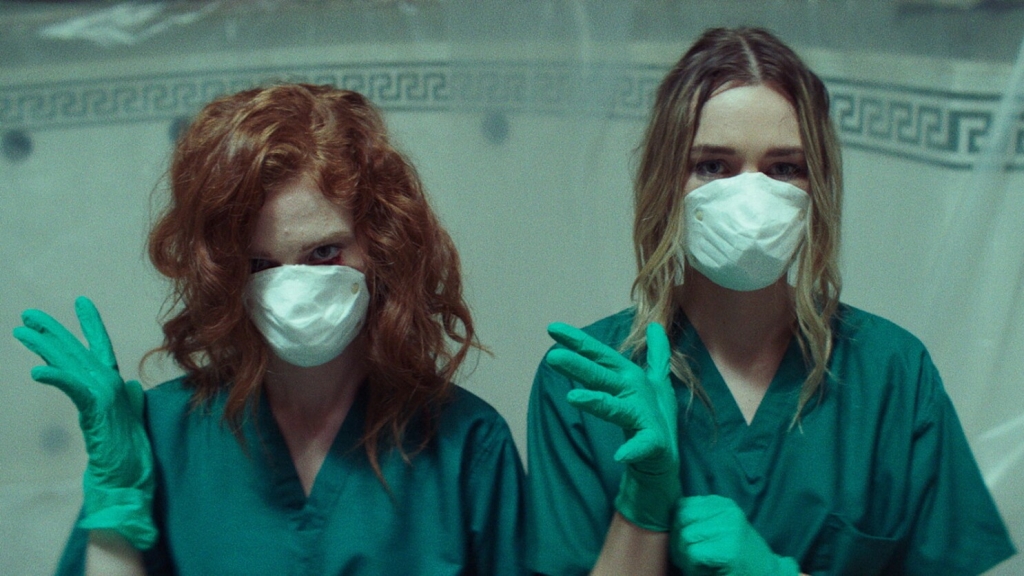 I guess the good thing about this fake pregnancy is that Petula is a fake doctor and can attend to her during labor and delivery.

Somehow, the three women appear uninjured and soon escape from Daphne only for it to be revealed that they are all very old and never left in the first place.

I have no idea what was going on in this film, but I absolutely loved it. It’s wild, crazy, loud, and trippy as all hell. The gore is fantastic and the terror that comes from utter lunacy and confusion is powerful.

Braid is an absolute must-watch that you can check out today, streaming for free on Tubi.