“Devil’s Express” is the 1970s Blaxploitation Kung-Fu Gang Warfare Horror movie that you never knew you needed in your life…until now!

This week’s Tubi Tuesday entry is from a horror sub-genre you may not be aware of but certainly need more of in your life: 1970s Blaxploitation Kung-Fu Gang Warfare Horror.

Yes, 1975’s Devil’s Express (aka Gang Wars) is exactly all of that at once, and so much more. Staring Warhawk Tanzania as Luke, the huge Fro-sporting, no nonsense, Brooklyn martial arts instructor. Can we just take a minute to acknowledge that the man’s name is Warhawk Tanzania? I feel like if your name is fucking Warhawk Tanzania you can’t just play a character with a normal name like Luke.

The movie opens in 200 BC in China with some bizarre ritual where a Samurai beheads a bunch of monks before cutting his own head.  Queue the funky 70s music and we flash forward to New York City and Warhawk’s dojo, where he is training a cop in Kung Fu. Apparently, this cracker ass cop (his words not mine) is trying to recruit him into the force. But Warhawk wants none of it.

We are introduced to his side kick Rodan, who informs us of a dice game gone awry as it was interrupted by a rival Chinese gang.

Queue a random trip to Hong Kong and an extended martial arts sequence. Rodan fails his kung fu test or whatever because he is still worried about the gang. But Warhawk enters the 9th degree and must go meditate or something. Rodan, bored of waiting for Warhawk to finish meditating, wanders into a cave filled with skulls and takes a necklace. A haunted, Chinese voodoo necklace.

Warhawk and Rodan make their way back to New York, and this is when Devil’s Express shows its special effects mastery.

How would you go about showing a brainwashed zombie man with a low budget?

Well, in this movie, they just have the actor close his eyes and they paste crazy eyes on his eye lids. No joke, 100% serious. That’s all they do. Is it still kind of spooky?  Sure. But is it cheesy as fuck? Yes.

From here, the movie gets very incoherent. We get random kung fu fighting, scenes with Warhawk in bed with random women set to sexy time funk music, a demon in the subway eating MTA workers and gang members. You know, standard New York movie fare. As iconic New York horror movies go, this one ranks somewhere between CHUD and Jason Takes Manhattan.

It’s CHUD-like, as there is a complicated story with too many characters and an unseen monster. But it’s Jason Takes Manhattan in the way that it’s supposed to take place in New York. However, other than a few subway scenes, there is nothing New York about it.

Through some truly gymnastic storytelling, we come to find that the Chinese gang wants Rodan’s necklace to give to the beast in the subway. And the beast wants it to transform into his final form. The cops are flabbergasted about the random deaths in the subway. But have no fear, Warhawk Tanzania is here to save the day!

He prepares for the final battle by dressing in shiny bright gold, bellbottomed overalls and heads into the subway to defeat the beast the only way possible: through a Kung Fu battle to the death!

This movie is absurd, but in a culty, enjoyable way that makes it a must see.

The acting is non-existent. No one in this film had another role. except a random extra who ended up being Reuben Klopek in The Burbs. The kung fu is also not very good, but its accented with a fantastic 70s funk soundtrack that would make Shaft envious.

The stand out portion of this film is the horror aspect. The shapeshifting monster is creepy and terrifying. The monster-caused deaths are fantastic, the practical effects are great at times and cheesy at others — which is all you could expect from a 70s movie. 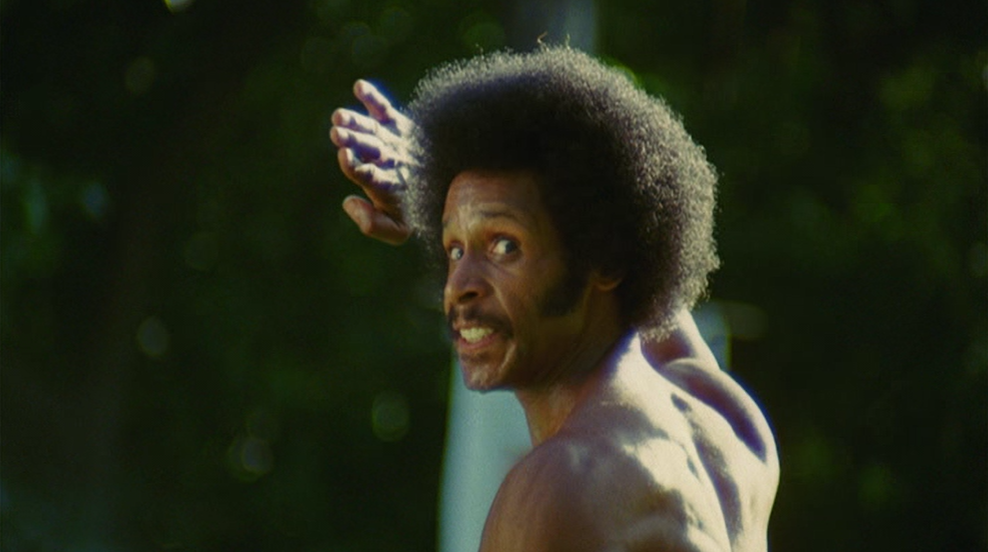 For strong horror content mixed in with 1970s gangland, kung fu, blaxploitation absurdity, this one cements itself as a horror cult classic. It would pair well with the Hammer Horror classic Legend of 7 Golden Vampires.

If you are looking for something way, way, way off the beaten path, Devil’s Express is currently streaming on Tubi and is one I highly recommend.