A clumsy story filled with horror lore and possibly the first appearance of Michael Myers, this is requisite viewing for its history alone. 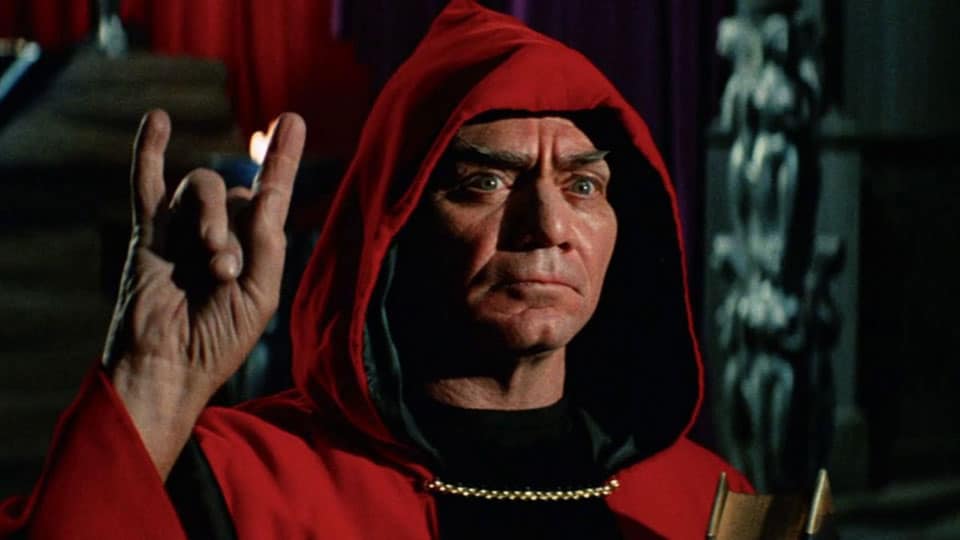 Traveling to the desert to free his family from a Satanic cult a man learns the troubled and entwined past his family shares with the book of the Devil. Let’s dig into 1975’s “The Devil’s Rain”, directed by Robert Fuest!

It’s the tangibles that are the interesting part of this film, so let’s clear away thoughts on the story and get to the fun stuff as quickly as possible.

It feels as though they thought of people melting and worked back from there. Let’s add a cult, let’s add a Satyr, let’s hire Anton Lavey for street cred. How bout the book of the damned? Let’s toss it all in and stir that shit around. The story is convoluted for no good reason, and if I was Shatner, I would have been pissed that my role wasn’t the hero (though Tom Skerritt is a good protagonist). A family possesses Satan’s ledger of souls and a Satanic cult wants the book.

Alright, that’s done with, now to the cool shit.

The effects are rad. The melting skin which looks like the bathroom concoction you’d make as a kid when you mix all your Mom’s shampoos, conditioners, and skin lotions to make a very expensive nightmare cream. The cult members bleed in pastels and their sunken black eyes leak what looks like mint ice cream. The Goat Man is brilliant. It’s whimsical, well-executed, and collection-worthy. Unfortunately, that same whimsy doesn’t work as well with the set design, as symbols and the altar come across as cheesy.

The most famous part of this film (besides that its title was featured on the marquee in Scorsese’s unhinged vigilante masterpiece, Taxi Driver) is William Shatner’s face! No, not just because he’s Captain Kirk and part of intrinsic pop culture. His molded face, sculpted by Don Post Studios for this film — and subsequently, the same mold used for a Captain Kirk Halloween mask. It’s the exact mask that, after alterations, became the mask of the Shape himself, Michael Myers for John Carpenter’s Halloween (1978).

There is a scene during the climax when Mark (Shatner) holds his brother (Skerritt) against the wall. He tilts his head slightly, silently, and his recessed empty eyes send a shiver of deja vu down your spine. Shatner may have to be considered the original Michael, and not just because of his latex head. That’s horror history, baby.

The original Captain Kirk, William Shatner (Mark), hilariously denounces the chance of a Star Trek film being successful in an interview included on the Blu-Ray release and touts a new film he just completed (this film) as proof that he doesn’t need to waste his time with such a futile effort.

Ernest Borgnine (Corbis) is ubiquitous; whether it’s Escape From New York, or Baseketball, or Willard (1971), or The Wild Bunch (1969), you know him!

John Travolta appears in his first film role, though minimal. You’ll recognize him by his pronounced chin, but not much else I noticed, as he rightfully throws this film out as atrocious but filled with great talents. He’s right.

Using a Hieronymus Bosch painting for the title sequence was a wasted opportunity as it wasn’t for much more than declaring this not a comedy.

Equally underutilized was the founder of The Church of Satan, Anton Lavey, who is credited as an advisor as well as playing a small part as a cult member. There isn’t much technical expertise applied to the cult’s motive and methods. Maybe he was added for credibility? An unsuccessful measure.

The easy way to go would be to declare that an early forties Shatner should get the bone here, but it’s similarly aged Tom Skerritt whose charisma and hunky, mustachioed good looks win the day.

It would be easy to fill a remake with easter eggs, as this film is rife with reference material. It’s hard to imagine anyone messing with the book of the Dark Lord or any of that source material after what Netflix’s recent Sabrina series laid out, but the concept has rich potential and built-in imagery to dazzle and scare.

Severin Films released a limited edition Blu-Ray with a slipcover and a Corbis pentagram patch. It’s also available to stream on Amazon Prime or Tubi.