Video Rewind tells the stories behind forgotten VHS favorites from the video store era, one rental at a time! This month’s movie is 1993’s “Matinee”. 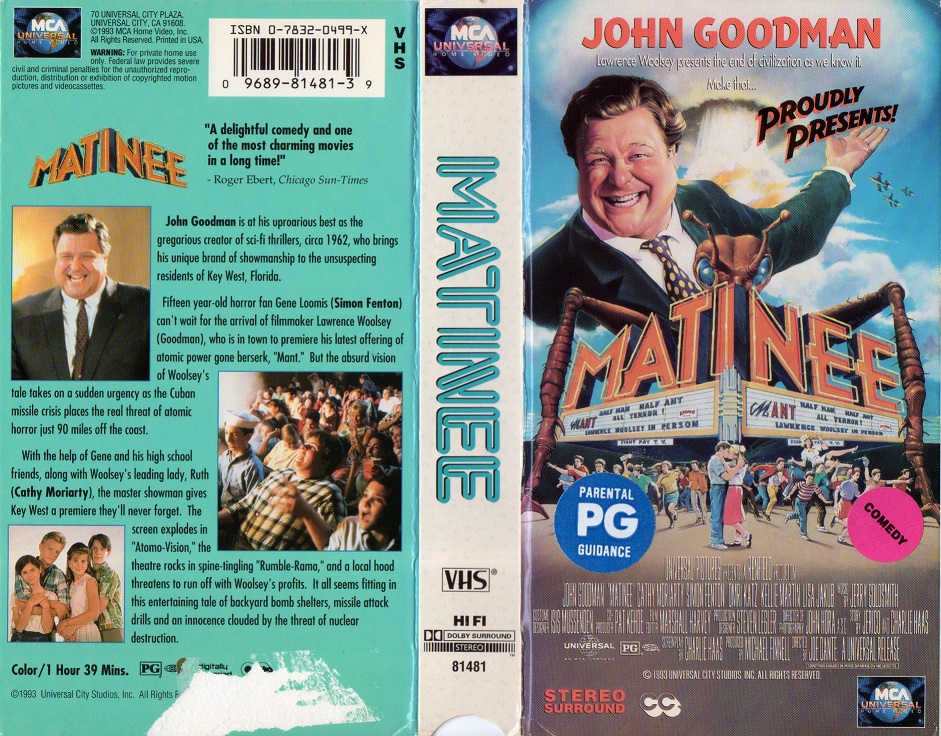 Hollywood loves making movies about Hollywood as much as audiences love watching them. Countless films about the film industry have enjoyed both box office and critical success, some even nabbing Oscar nods for Best Picture (and winning), in Hollywood’s ultimate attempt to pat its own back. Such films over the years include La La Land (oh so close to that Best Picture win), Argo (winner), The Artist (winner), Once Upon a Time in Hollywood (nominee), Mulholland Drive, Bowfinger (should have been nominated), The Muppet Movie (seriously should have been nominated), Hollywoodland, and countless others.

Even recent television shows have explored the drama behind the industry, such as Amazon’s criminally underseen The Last Tycoon and Netflix’s on-the-nose titled Hollywood. All are fascinating and entertaining in their own way.

But few are as charming as Joe Dante’s 1993 effort Matinee, a love letter to small town America and the sci-fi, creature feature movies of the 1950s and 1960s.

Set in 1962 during the escalation of the Cuban Missile Crisis and growing fear of nuclear war with the Soviet Union, Matinee focuses on the town of Key West, Florida, less than a hundred miles across the ocean from Cuba. 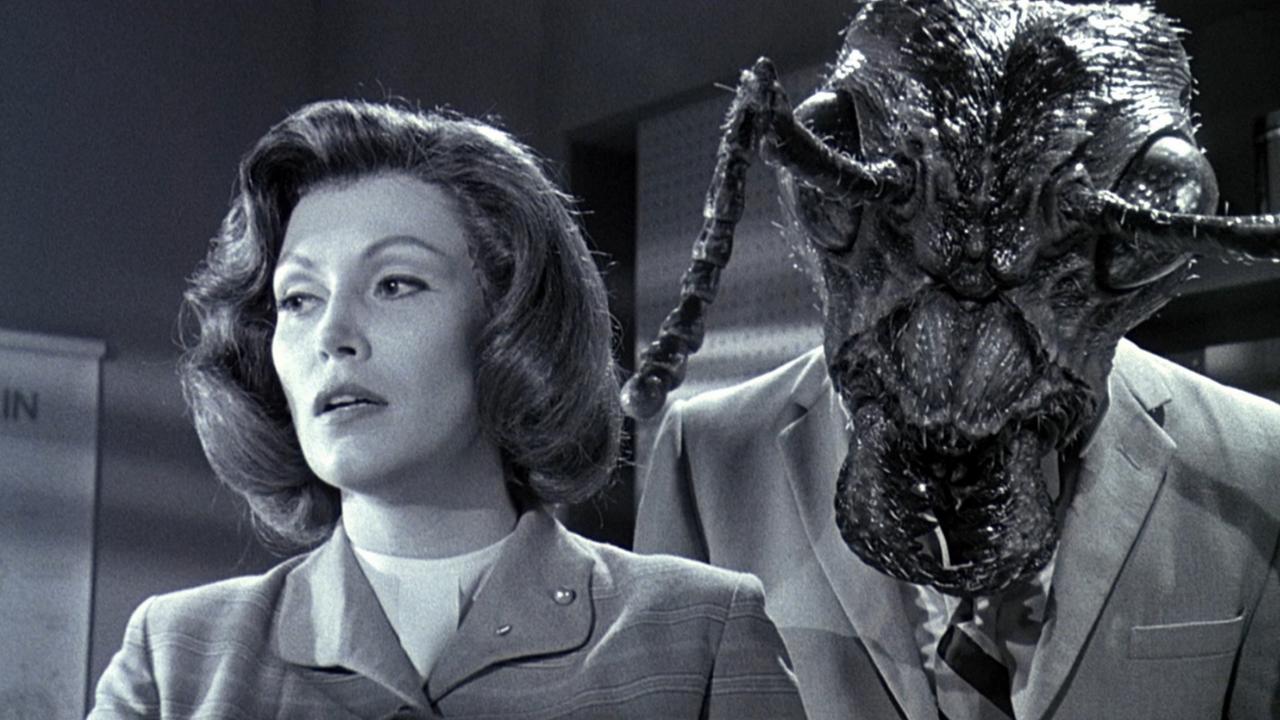 The townspeople live in palpable fear of a nuclear attack, and shock movie producer Lawrence Woolsey (John Goodman) finds great opportunity in this fear to hype up and premiere his latest sci-fi/horror flick Mant!, a film about a man half mutated by nuclear radiation into an ant.

“A theory that has been written about in national magazines,” Woolsey says as he quickly waves a few magazines across the screen in his promo for his new film, the titles of which are blurred with movement and unreadable.

The promo opens with an Alfred Hitchcock-like silhouette to reveal Woolsey (he humorously gets mistaken for Hitchcock a little later, much to his dismay), boasting his new film will be presented in Atomo-Vision, an immersive new experience that brings the viewer into the movie.

While the Cuban Missile Crisis serves as the catalyst for a week the United States will never forget, Mant!, the film within Matinee, serves as the connection for a group of kids coming of age in Key West, Florida. 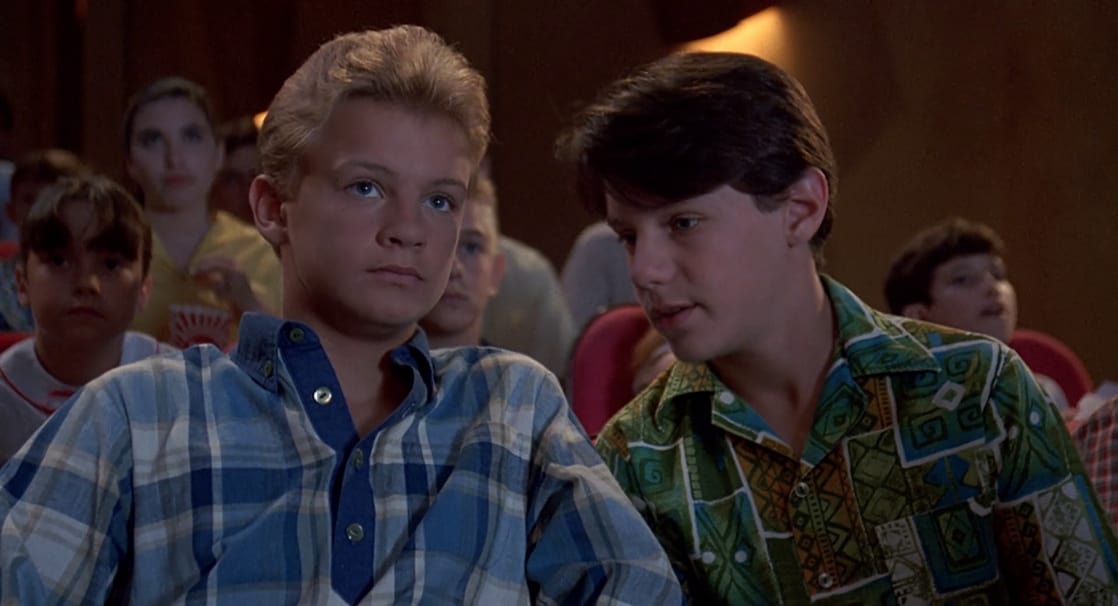 Gene Loomis (Simon Fenton) is a horror movie loving kid who collects Famous Monsters of Filmland magazine (the ones on screen are from director Joe Dante’s personal collection), and loves spending time at the local movie theater, The Strand. Living on a military base with his mother and younger brother while his father is away in the Navy, Gene worries greatly about his father. Along with his friend Stan (Omri Katz), the coming premiere of Mant!, and a new girl in town named Sandra (Lisa Jakub), Gene is distracted just enough to experience one crazy week of growing up.

The role of Gene went to a young, London born actor named Simon Fenton, a blonde haired, Tom Sawyer type who could speak with an impeccable American accent. Fenton was fresh off the release of The Power of One where he played a younger version of star Stephen Dorff in a World War II boxing drama directed by Rocky and The Karate Kid helmer John G. Avildsen. Production on Matinee began just a couple weeks after the release of The Power of One in the Spring of 1992, and working with the Oscar winning Avildsen (Rocky) and the hit-making Joe Dante (Gremlins) was a promising start to the young actor’s career.

However, although Fenton would go on to steadily work in more than 15 television shows over the next decade (he has one credit since 2001), The Power of One and Matinee remain his only 2 feature film credits.

Being quiet and shy as a kid, Lisa Jakub relished the opportunity to play Sandra, the hippie-like rebel and status-quo disruptor who speaks her mind and rails against the system. 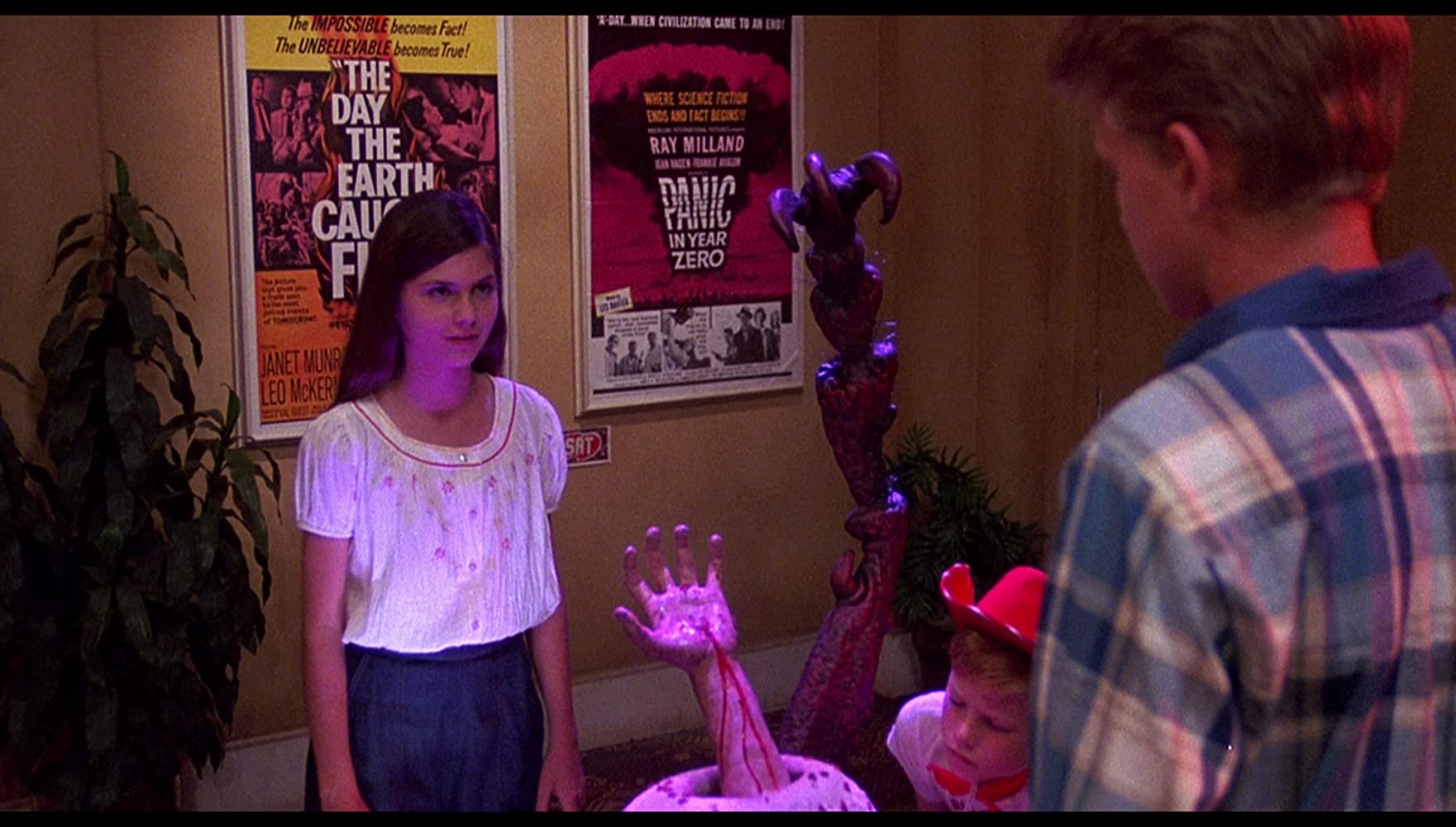 When the kids in school are practicing a duck and cover drill, bent over on their knees with hands behind their necks as protection against a possible nuclear attack, Sandra catches Gene’s eye (and the entire school’s) while arguing that this ridiculous drill does nothing as she’s pulled to the principal’s office. “The radiation will still get you and you’ll puke up your organs,” she yells at the kids ducking in the hallway. Be still Gene’s beating heart…

A self proclaimed huge fan of Innerspace as a kid, Lisa Jakub was thrilled to work with director Joe Dante, but nervous about a scene that involved a kiss with Simon Fenton’s Gene. The onscreen kiss would be Jakub’s real first kiss, and the scene originally also called for a little clumsy teenage groping. The 14 year-old actress asked Dante if that could be removed, and much to Jakub’s relief, Dante agreed saying he was thinking of cutting the groping anyway. And according to Jakub’s memoir, You Look Like That Girl..., the director added, “besides, there’s nothing there to grab!”

Playing Gene’s friend, Stan, was Omri Katz. Dante had worked with Katz before on the excellent but short lived TV show Eerie, Indiana, but the young actor was most known at the time for his role on the smash hit TV show Dallas, which ended its eight year run in 1991. 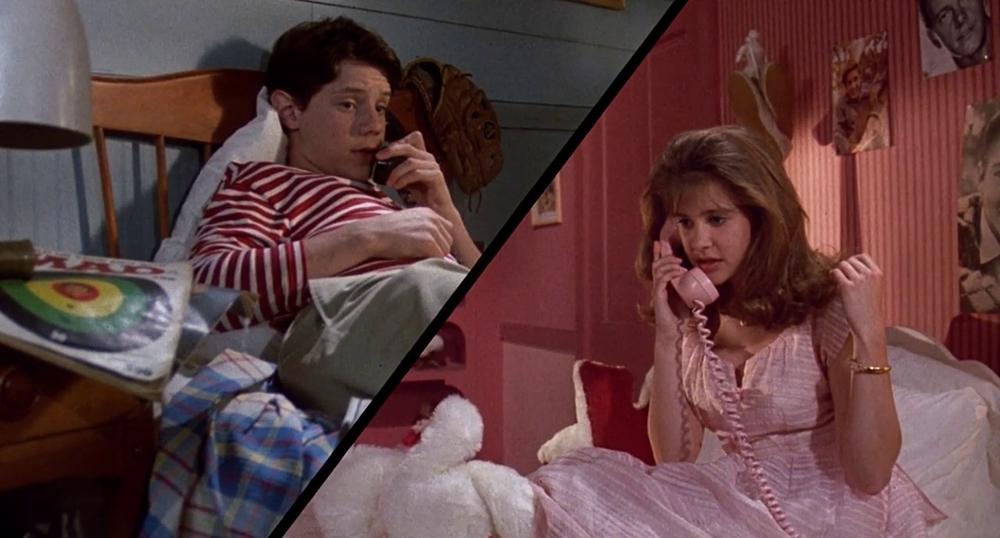 Sherry recently experienced a sort of sexual awakening with her older ex boyfriend Harvey, an up-to-no-good tough guy who frightens Stan almost as much as Sherry purring about the awareness of her body’s desires. Martin was best known for the TV show Life Goes On, in its 4th and final season during the release of Matinee.

Similar to Simon Fenton, Omri Katz and Lisa Jakub also left the business in the early 2000s (Katz is now a hairdresser, Jakub a writer).

But it was Katz and Jakub who would forever became familiar faces with the now Halloween favorite Hocus Pocus (Katz), and the comedy classic Mrs. Doubtfire (Jakub), both released later in 1993. While Katz’s career peaked with Hocus Pocus, Jakub’s would gain further traction and peak three years later with a role in the biggest box office hit of 1996, Independence Day.

While the teens of Key West awkwardly maneuver the ins and outs of young love, filmmaker Lawrence Woolsey is busy priming the town for the premiere of Mant!. 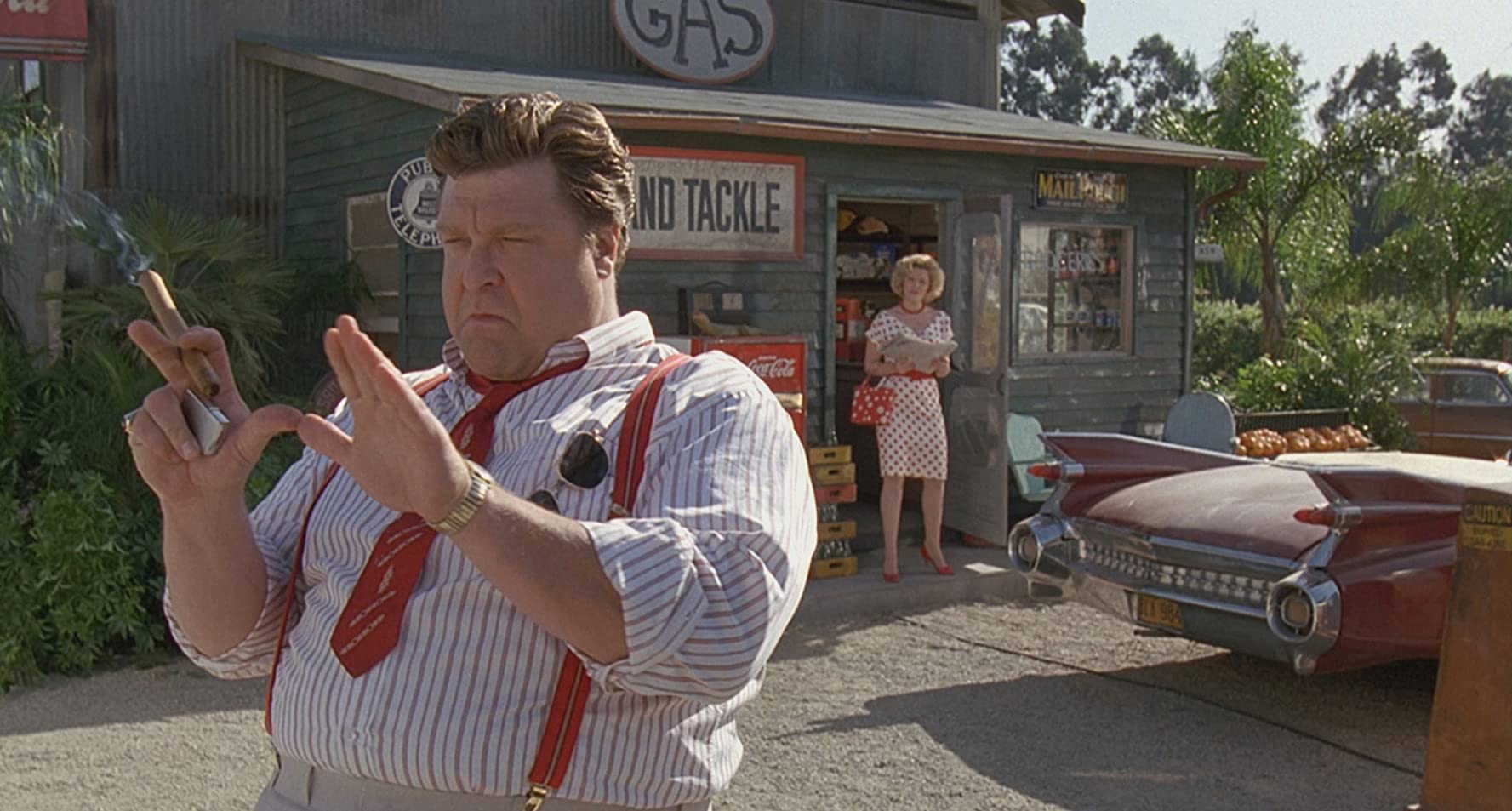 John Goodman found success and was well known as Dan Conner on the hit TV show Roseanne, but had an up and down track record at the box office. Goodman scored minor hits with Arachnophobia in 1990 and King Ralph in 1991. But despite earning good reviews for his performance, Goodman struggled at the box office in 1992 with the Babe Ruth biopic The Babe. Things wouldn’t improve with Matinee, but Goodman would hit big in 1994, perfectly cast as Fred Flintstone in the big screen adaptation of The Flintstones.</