Video Rewind tells the BTS stories of VHS favorites, one rental at a time! Press play and adjust your tracking for “The Puppet Masters”. 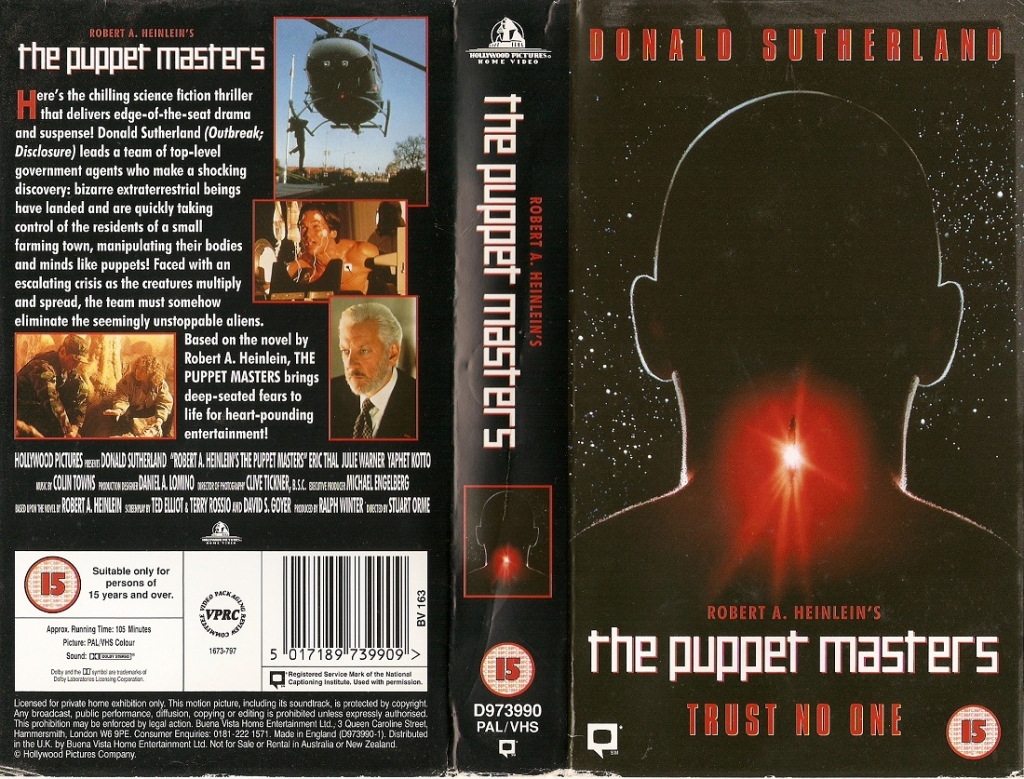 Combining the rise in UFO sightings following World War II (the most popular being the 1947 “flying saucer” crash in Roswell, New Mexico), with the looming threat of a communist presence in the U.S. known as the Red Scare, provided a chilling theme for science fiction invasion stories of the 1950s. Both books and films experienced a boom in the visitors-from-outer-space genre, with otherworldly beings looking to take over and control the population of Earth.

A few notable works include the movies The War of the Worlds (1953), Invaders From Mars (1953), and Invasion of the Body Snatchers (1956), which was adapted from the popular 1954 novel “The Body Snatchers” by Jack Finney.

Both Invaders From Mars and The Body Snatchers utilize the idea of aliens taking over individual people, by either duplication or mind control. This idea of sameness and a lack of individualism was the ultimate threat to a free country like the United States, and something the Cold War rival Soviet Union forcefully embraced through communism.

While The Body Snatchers is by far the most popular example of this, its thematic roots lay in a work that pre-dates it by three years, a 1951 novel called “The Puppet Masters” by Robert A. Heinlein.

The story, which told of parasitic alien slugs that controlled the minds of humans, originally appeared as a serial in the 1951 September, October, and November issues of Galaxy Science Fiction magazine (much like The Body Snatchers in Collier‘s magazine in 1954). But unlike its instant-classic follower The Body Snatchers, The Puppet Masters didn’t get the chance to take advantage of the UFO-Red Scare craze in 1950’s movie houses.

Instead, the film adaptation of The Puppet Masters would take 43 years to happen, and according to screenwriter Terry Rossio, “the film is piss-poor terrible.” 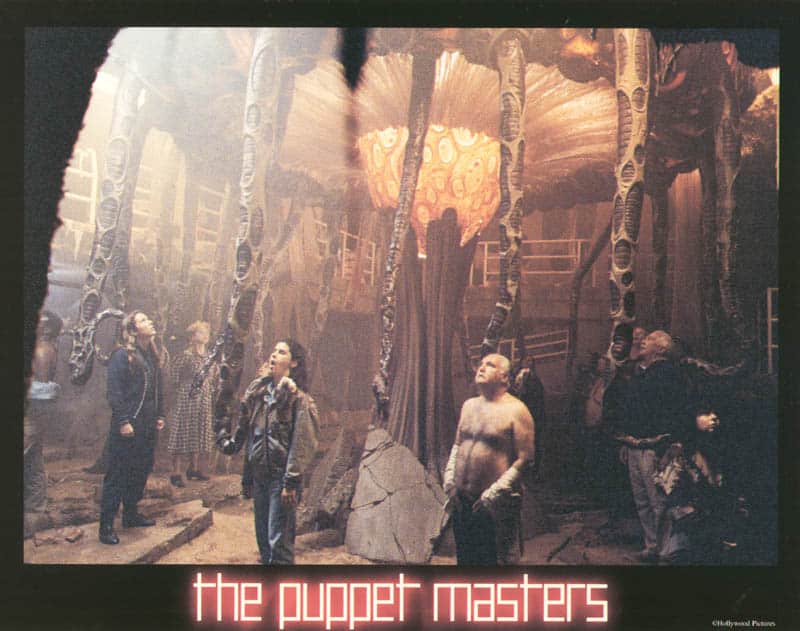 In 1990, Terry Rossio and his writing partner Ted Elliot wrote a screen adaptation of the Edgar Rice Burroughs novel A Princess of Mars. The executives at Disney were very pleased with the script and John McTiernan, one of Hollywood’s hottest directors at the time after Predator and Die Hard, was set to direct.

The film seemed destined to be a hit, and the studio was eager to work with Rossio and Elliott on another project. Being fans of the 1951 novel, the duo pitched The Puppet Masters to executive producer Dr. Michael Engelberg (an oncologist at Cedar-Sinai in Los Angeles), saying “there are whole sequences we can use straight from the book. We can get a great script done pretty fast.”

Disney liked what they heard and bought the rights to the book.

Ricardo Mestres, then president of Hollywood Pictures, a division of Disney and production company behind The Puppet Masters, commented after reading the script that “it doesn’t work on any level.” Rossio said he and Elliot “were dumbfounded.” “Our screenplay was the same story we pitched, which was the same story of the outline we turned in,” said Rossio. “It was also the same story from the book they’d just spent so much money to own.”

Rossio and Elliot soon found out that Mestres never actually read The Puppet Masters novel. Upon finally reading it, Mestres didn’t care much for it, concluding that Rossio’s and Elliot’s script “stayed too close to the book.”

The first red flag was Mestres recommending the aliens travel to Earth through spores instead of spaceships, claiming spaceships were too 1950s. Rossio and Elliot left Mestres with the suggestion that the spore idea was dangerously similar to Invasion of the Body Snatchers before the writing duo was off to do a rewrite of Aladdin, Disney’s next big animated feature.

At this point, Mestres at Hollywood Pictures was looking for writers to do a rewrite of The Puppet Masters, fashioning a script that was more to his liking.

Engelberg convinced Rossio and Elliot to do the rewrite, something they weren’t thrilled about. But Rossio and Elliot figured if someone was going to rework their own script, it might as well be them instead of other writers not as passionate about the project.

The script was reworked, and with notes from Mestres, the new version would shoot on a more reasonable budget. The only problem now was that Engelberg was not happy. Having been a huge fan of science fiction and Heinlein’s novel his whole life, Engelberg was depressed to see the new script lose a lot of what made the novel so good in the first place.

According to Rossio, the new script “just wasn’t Robert A. Heinlein. And that’s what Michael really wanted to see.”

New writers were brought in, James Bonny and Richard Finney, in an attempt to incorporate more of the original source material into the latest version of the script. At the same time, Rossio and Elliot were instructed to revise their original script (the one they preferred anyway), presumably to address budget concerns. After the two separate rewrites were completed, whichever one Mestres liked best would be the final product.

All the while, Rossio and Elliot were distracted from their Puppet Masters rewrite because of their current work on Aladdin, and they thought their script was doomed when they found out that Mestres hired Toy Soldiers director Dan Petrie to helm Bonny’s and Finney’s version.

Not only was this a similar work of science fiction with similar alien invasion themes, but the se