Video Rewind tells the behind the scenes stories from the video store era, one rental at a time! This month’s movie is “Bad Girls” (1994). 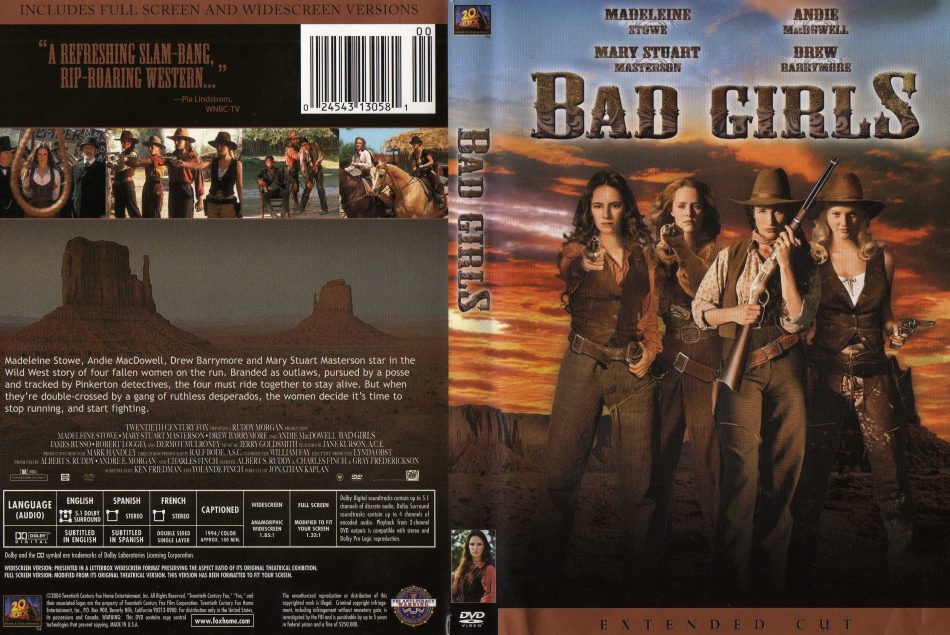 In 1988, Young Guns breathed new life into the Western genre. With its young cast of hip, rising stars including Brat Pack member Emilio Estevez, Kiefer Sutherland, Lou Diamond Phillips, and Charlie Sheen, the film struck a chord with younger audiences, racking up an impressive $46 million at the box office. A sequel followed two years later, along with Kevin Costner’s Best Picture winner Dances With Wolves, officially announcing the return of the Western to mainstream audiences. The Western revival would peak in 1992 with another Best Picture winner, Clint Eastwood’s Unforgiven.

The box office hit Tombstone starring Kurt Russell and Val Kilmer would follow in 1993, and Kevin Costner would revisit the Old West again in 1994’s Wyatt Earp. But another film lassoed the Western trend in the early 1990s that looked a bit different from the other, male dominated movies. Four women stood tall on the poster, donning cowboy hats and holding guns as the low, orange sun set behind them on a dusty, desert landscape.

These women, prostitutes of the Old West, were the new gunslingers in town in 1994’s Bad Girls.

Tamra Davis worked in an apprentice position in the early 1980s at American Zoetrope, the film production company founded by Francis Ford Coppola and George Lucas. It was during the tumultuous production of the box office disaster One From the Heart where she got an up close look at Coppola’s directing style and really learned the business of filmmaking. After graduating from Los Angeles City College, Davis spent the rest of the ’80s directing music videos for Depeche Mode, The Smiths, The Bangles, Sonic Youth, and others. Her feature film directorial debut came in 1992 with Guncrazy, a crime-romance that earned Drew Barrymore a Golden Globe nomination, and course-corrected her troubled career.

Davis’s sophomore film would be Bad Girls, a female-centric Western written by Yolande Turner and Becky Johnston, the Academy Award nominated screenwriter of The Prince of Tides (1991). 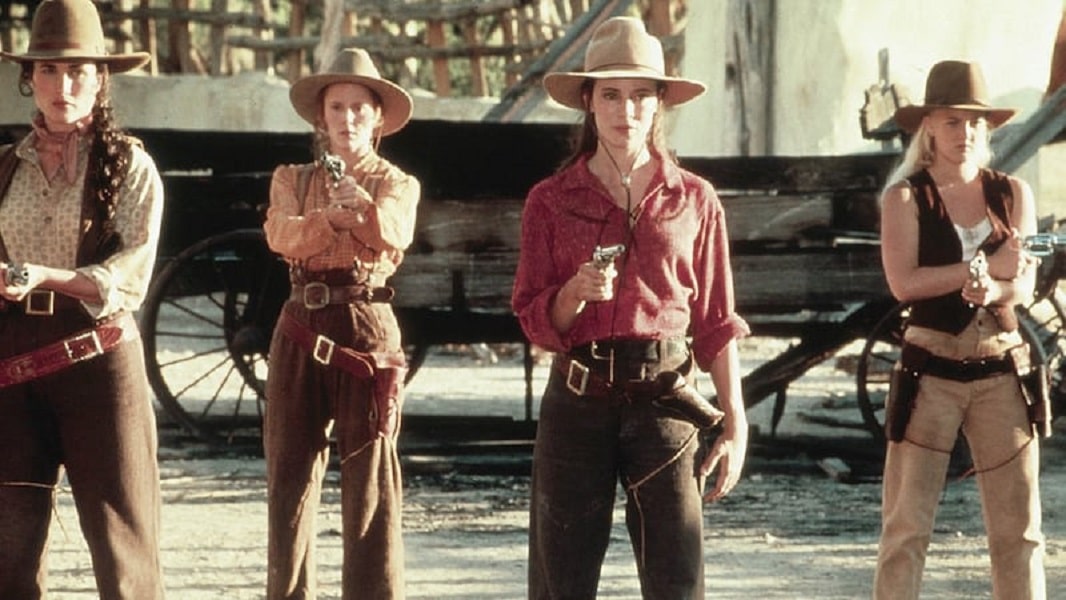 What started as a smaller scale, $6 million production quickly ballooned in both scope and budget when producers André Morgan and Albert S. Ruddy made a deal with Twentieth Century Fox. The budget was upped to $16 million and the studio ordered name actresses to lead the film.

The film’s potential went through the roof, and Bad Girls quickly became a high profile picture.

Davis was reunited with her Guncrazy star, Drew Barrymore. Barrymore had long been a household name since being too adorable for words as Gertie in Steven Spielberg’s decade defining phenomenon, E.T. (1982). In addition to her film roles, stints in rehab for drinking kept the troubled Barrymore in the headlines until the early 1990s.

Madeleine Stowe was on Hollywood’s A-list after her big year in 1992, having starred in the box office hits Unlawful Entry and The Last of the Mohicans. Former model Andie MacDowell turned heads in Steven Soderbergh’s sex, lies, and videotape and charmed audiences in Green Card (1990), both roles earning her Golden Globe nominations. MacDowell was also in the midst of the critical and box office success of 1993’s Groundhog Day opposite Bill Murray.

Rounding out the cast is Mary Stuart Masterson, recognizable to audiences from Some Kind of Wonderful (1987), Fried Green Tomatoes (1991), and was enjoying a sleeper hit in 1993 alongside Johnny Depp in Benny & Joon.

With four of Hollywood’s hottest actresses, Bad Girls quickly garnered a lot of buzz when production began in late June of 1993.

Filming started at the Red Hills Ranch in Sonora, California. 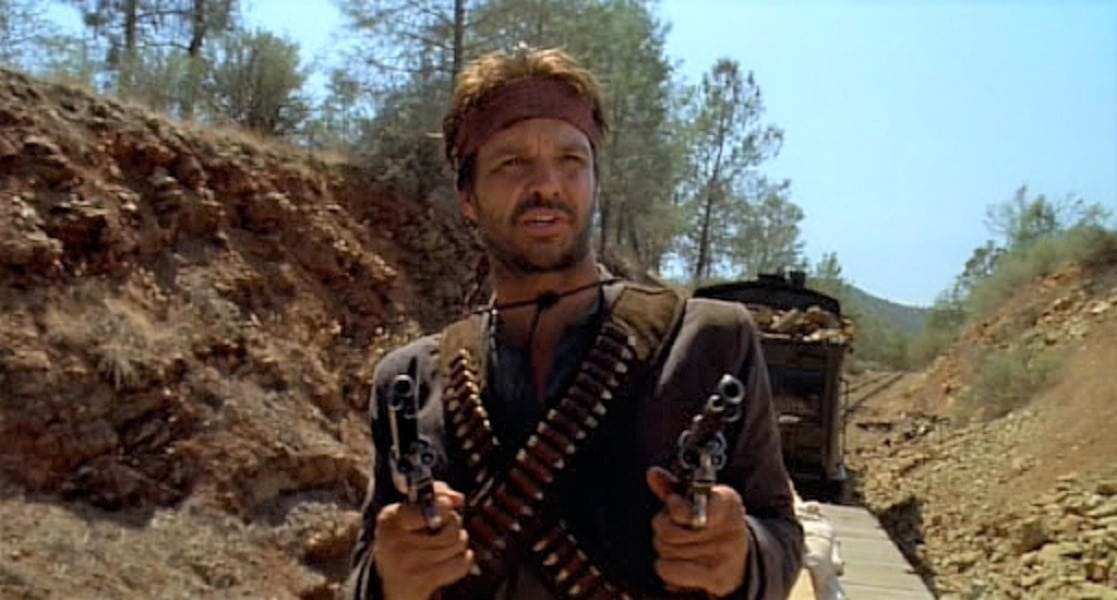 This was the same location used in Back to the Future Part III and Little House on the Prairie (the ranch was destroyed in 1996 in a brush fire caused by a lightening strike).

Just days prior, Davis reportedly was handed an extensive rewrite of the script, leaving the cast very little rehearsal time with the new material. After the first couple of weeks production fell behind schedule, and Twentieth Century Fox didn’t like what they were seeing in the dailies. Word was that Davis wanted the Wild West seen through a feminist lens, while the studio wanted to see more traditional Western action in the style of Young Guns.

Producers Morgan and Ruddy said the move was due to “creative differences,” the old Hollywood motto to smooth over any problems and avoid controversy. Madeleine Stowe felt the tension on set, recalling, “I remember thinking that there was something that wasn’t quite right. There was this free-floating anxiety on the set. It was weird. And then it fell apart.” But Stowe was also aware of the pressure Davis was under from the studio, and defended her by adding, “there is no director, given the kind of production she was given, who could have come up with what they wanted.”

Davis would later get a call to helm a comedy about a goofy man-child starring an up and coming Saturday Night Live cast member named Adam Sandler. Billy Madison would go on to become a cult classic, as would Davis’s next directorial effort in 1998, Half Baked.

Production on Bad Girls was halted and re-scheduled to resume in late August. 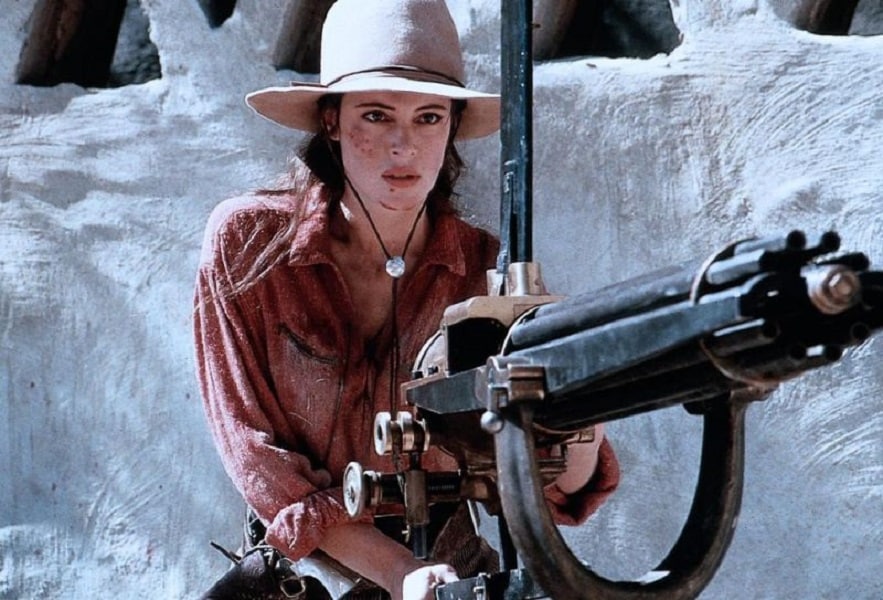 In the meantime, Lynda Obst was brought on board, the producer who partnered with Debra Hill to produce such films as Adventures in Babysitting (1987) and The Fisher King (1991). Obst also helped develop the script that would become Flashdance in 1984, and she gave Bad Girls a much needed feminine presence on set. Her hire was a welcome addition to the team, especially when the studio hired Ken Friedman to rewrite the script and Jonathan Kaplan to replace Tamra Davis as director (Friedman and Kaplan previously collaborated on 1983’s Heart Like a Wheel).

Kaplan was a capable hire.

Any aspect of the Davis version seemed harder and harder to find as the project switched hands and changed in overall vision. Kaplan and Friedman did, however, take input from the four female leads. “I was pretty adamant about some of the things we wanted to keep,” said MacDowell.

As the script was re-written, the budget was raised to about $30 million, new locations were sought, and the four leads were sent off to cowboy camp. 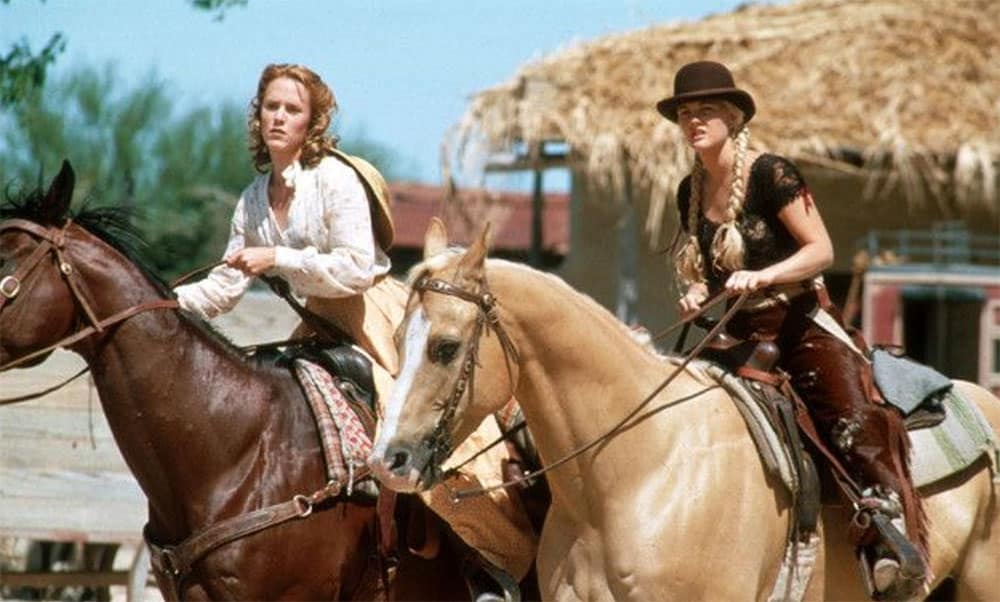 Both Stowe and MacDowell owned horses and were exceptional riders, but none of the women received proper weapons training or lessons in how to perform like a cowgirl.

Under the tutelage of stunt coordinator Walter Scott, a veteran of the business who worked on over 75 films including Dirty Harry and the Back to the Future trilogy, the women learned to ride horses (Barrymore’s horse was named Bon Jovi), and were trained to do a lot of their own stunts. These are things in filmmaking that are largely only done by men.

While the feminist leaning version Tamra Davis had envisioned was turning into a more male friendly, traditional Western at the studio’s request, the masculine training and physicality of the performances were a step forward for women at the time.

Producer Lynda Obst summed it up by saying Bad Girls is “much more in the tradition of Sergio Leone. This movie is an homage to movies, not to history.”

Production re-started on August 26 in Brackettville, Texas, about one hour from the Mexican border. Filming took place at Alamo Village, a film set built in 1957 for the John Wayne film The Alamo. Over a dozen movies have been filmed there, including the hit 1988 TV mini-series Lonesome Dove, but th