Syndrome Saturday: Hellmaster (aka Them)(1992)

VinSyn unearths “Hellmaster” from the early 90s — giving John Saxon fans a chance to see a forgotten relic from the end of the straight-to-video boom. 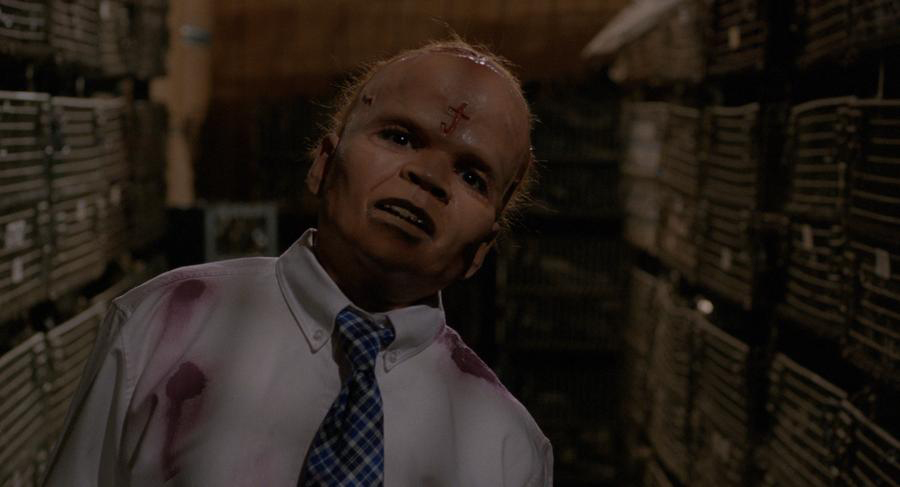 The folks at Vinegar Syndrome are at their best uncovering lost and forgotten genre gems. Has Vinegar Syndrome uncovered another diamond in the rough, or is HELLMASTER just horror fool’s gold? 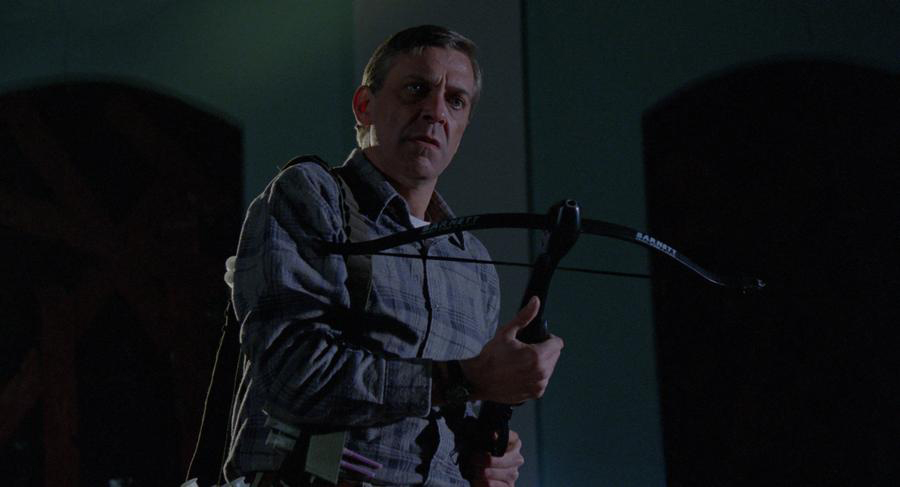 Saxon plays Professor Jones who has created a drug called “The Nietzsche Experiment.” The drug is meant to heighten or bring out hidden psychic abilities in a person, but mostly the drug turns the user into a murderous mutant maniac. A reporter, Robert (DAWN OF THE DEAD’s David Emge), is investigating Professor Jones’ experiments and uncovers a basement full of people who have reacted badly to the drug and are beginning to mutate. This is very reminiscent of the basement scene from George A. Romero’s DAWN OF THE DEAD. Robert plays a part in ending the experiments, but Professor Jones flees and hides for twenty years.

Coming to the present, at the college where Professor Jones conducted his experiments, a new class of special students are being recruited to continue the work on psychic abilities. Also returning are some of the mutants who survived the drug experimentation from twenty years earlier. Their skin marked and deformed, they are hungry for bloodshed and working at the command of Professor Jones. 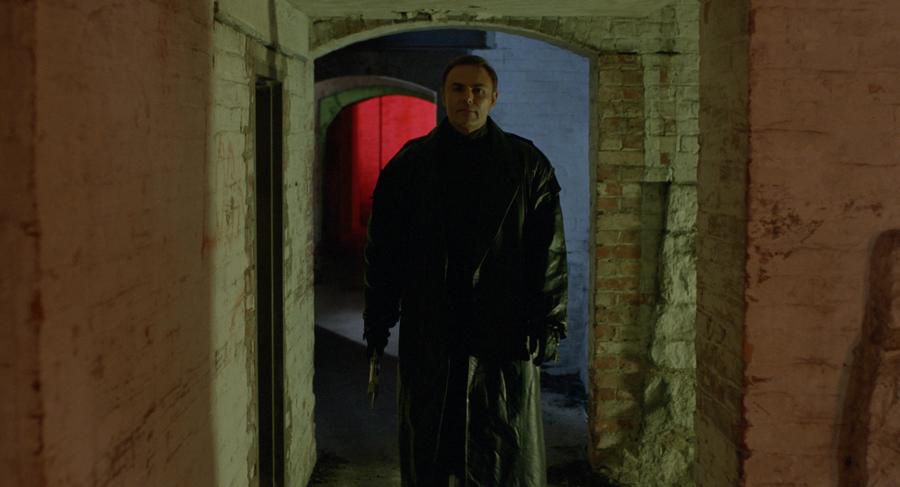 With Jones thirsting for revenge and to continue his drug experiments, no one at the college is safe, and one student in particular becomes a target for Professor Jones.

Shelly (Amy Raasch) shows some psychic power potential and might be the key to unlocking the full potential of “The Nietzsche Experiment.” But can Shelly and her friends survive their night of terror with Jones and his mutant army?

The version of the movie that has been restored in 4K is titled THEM and is the original release of the film. 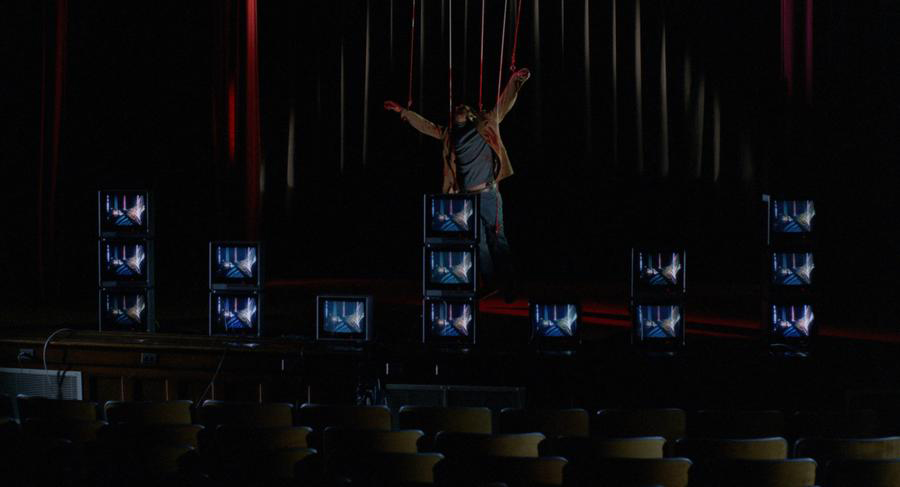 In short, the movie is not very good.

All the problems lay in one spot — the script. Instead of focusing on a group of college students trapped with a crazed scientist and his mutants, the story branches off into subplots for almost all of the supporting characters, and none really get any payoff. The story becomes bogged down and loses the plot.

Watching THEM was the longest 96 minutes of my life. At one point, thinking I was near the end of the movie, I checked the remaining time left and saw I had only watched 20 minutes of the movie. I was in for a long night.

This, by no means, is a criticism lost on writer/director Douglas Schulze. During the commentary track, Schulze is clearly frustrated by the quality of the script, as well as the editing of his movie. 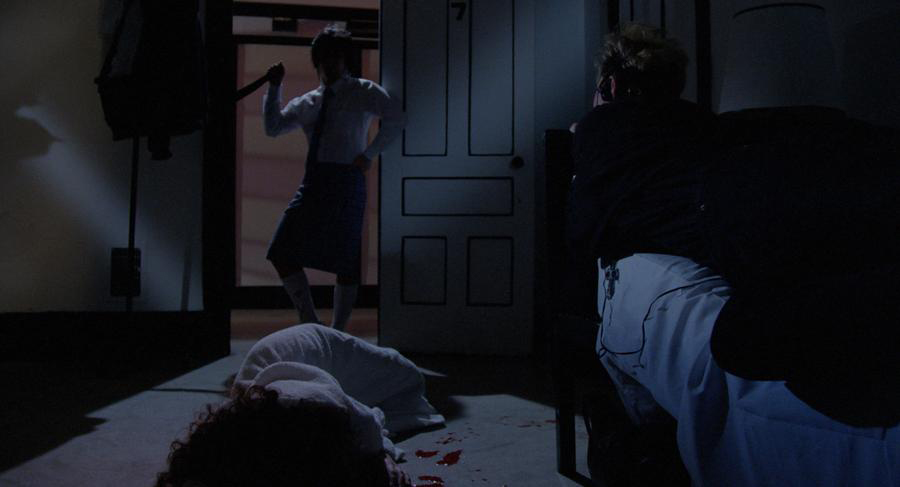 THEM is clearly inspired by classic horror movies like PHANTASM, A NIGHTMARE ON ELM STREET, DAWN OF THE DEAD, and SUSPIRIA.

While there are scenes in the movie that are reminiscent of scenes from those movies, the lighting scheme is clearly inspired by Dario Argento’s masterpiece, SUSPIRIA. Schulze, with acclaimed cinematographer Michael Goi, infuse THEM with intense blues and reds throughout the film.

While the movie isn’t great with its story, that doesn’t mean there isn’t something in THEM worth appreciating. Schulze, admittedly, spent much of his time concentrating on art direction and design, and on that aspect, THEM shines. 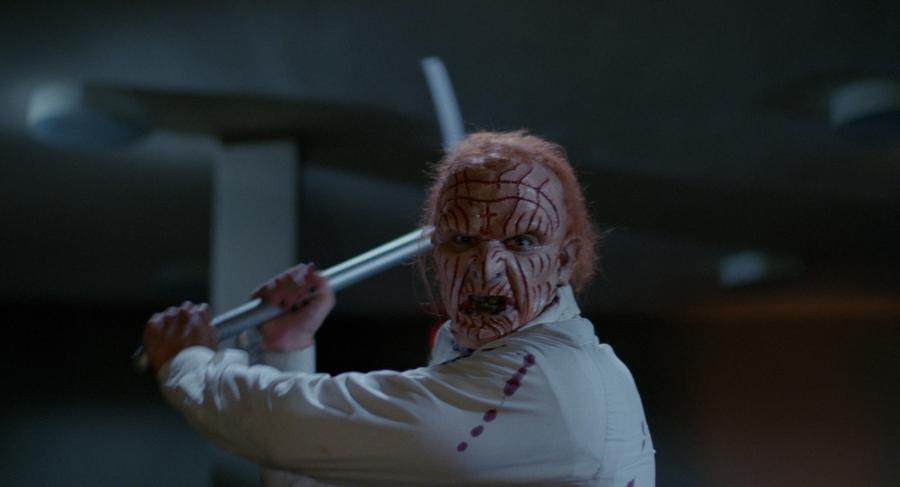 THEM is a complete success when it comes to the set design, makeup, and effects work.

The mutants, in their full transformation, are a horror to look upon. Certainly, the mutant leader design draws on Pinhead (hence the producer-mandated title change from THEM to HELLMASTER), but the overall makeup design shows some real genius and eye for creating nightmarish creatures. The visuals in THEM is a landscape of inspired mayhem and nightmare fuel that, with the proper story, could have become a cult hit comparable to movies like NIGHT OF THE DEMONS or the PHANSTASM franchise.

John Saxon, though billed as the lead and a major part of the marketing for the movie, has limited on-screen time. He dives into the part with relish, but again is betrayed by a script that has him repeating lines about the death of God in different parts of the movie. 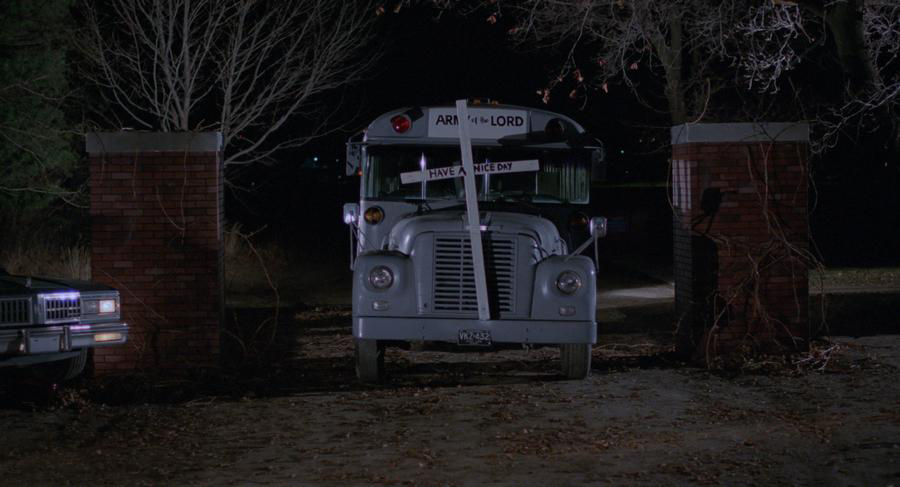 Schulze only had Saxon available for four to five days of shooting, but it’s clear THEM would have been a better film with more focus on Saxon’s Professor Jones character and less on the college students running from his mutant psychos.

THEM is not great, and at times can feel like it’s dragging its feet instead of getting to the point and to the bloody carnage. What it lacks in coherent storytelling, THEM almost makes up for in its visuals and stunning makeup effects. John Saxon and David Emge fans will dig this, but THEM is more of a curiosity viewing than a movie that fans will go back to for repeated viewings.

Perhaps take the suggestion of Douglas Schulze and imbibe some alcohol or other mind-altering products before viewing for a better experience. 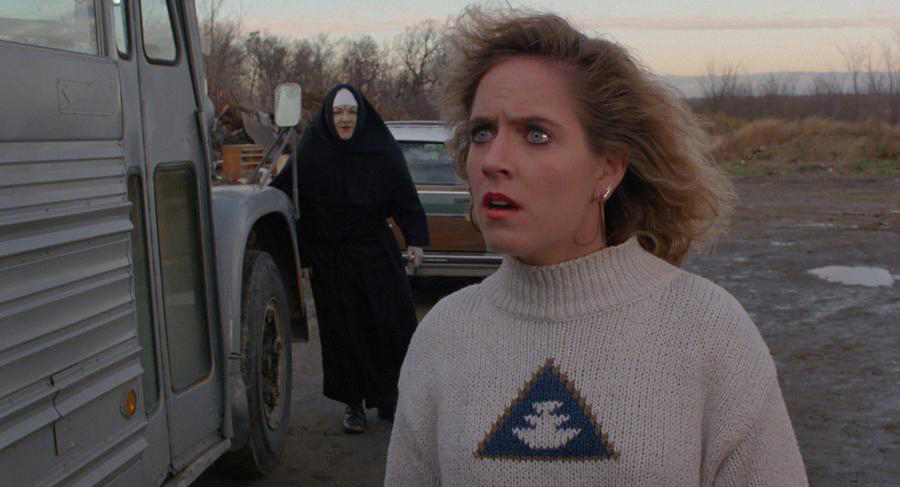 When Blu-rays boast a restoration of an older film, it’s difficult at times to really judge the work done on scanning and restoring the film because there’s nothing readily available to compare the picture to. But in the case of this release, the disc also contains a director’s cut — HELLMASTER. This version has a running time about five minutes less and is edited to better match Schulze’s original script. HELLMASTER, however, has not been restored and is presented in its standard definition.

The two versions of the movie give the viewer a rare opportunity to compare the restored picture to the standard definition picture. The restoration, supervised by Michael Goi, is a stunning improvement. The new 4k version highlights the best features of the movie — the design and makeup effects. THEM is awash in the Dario Argento inspired color choices, and a picture so sharp that the brilliant makeup work shines through. 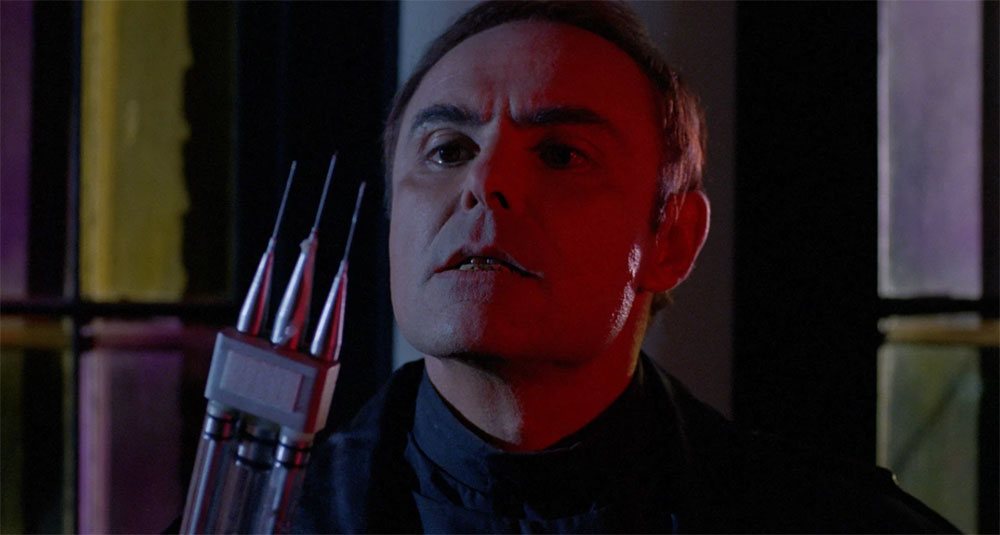 Despite an inferior picture, the director’s recut of HELLMASTER is the better version of the movie to watch.

Schulze recuts the movie to better reflect his original script and intention with the movie. The pacing is much better and the movie offers an introductory scene that more effectively draws the viewer into the story.

The disc comes with two commentary tracks. The track for THEM provides commentary from director Douglas Schulze. While there is some interesting information given during the commentary, like stories about shooting in an operational mental institution, Schulze frequently comes across as bored with his own movie.

Schulze also leaves large gaps of silence during the commentary track, and at times mumbles an observation before seeming to realize he needs to speak up. This commentary track is sorely in need of a moderator to keep Schulze talking about the movie and/or his career. 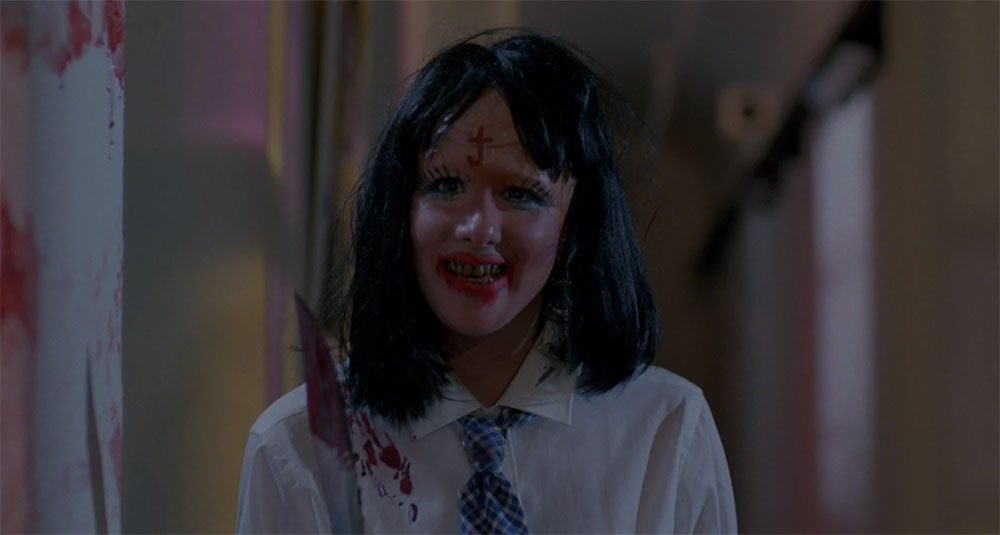 The second commentary track is for the director recut, HELLMASTER.

This track includes Schulze and producer Kurt Mayry discussing the making and release of their movie. The track still suffers from some of the same issues as the track for THEM. Too many times they stop talking or mumble an observation.

However, when they do speak the commentary has an energy to it because of the camaraderie of the two men. They speak fondly of their experiences making their first movie, working with John Saxon, and the difficulties of shooting a horror movie in a functioning mental institution. 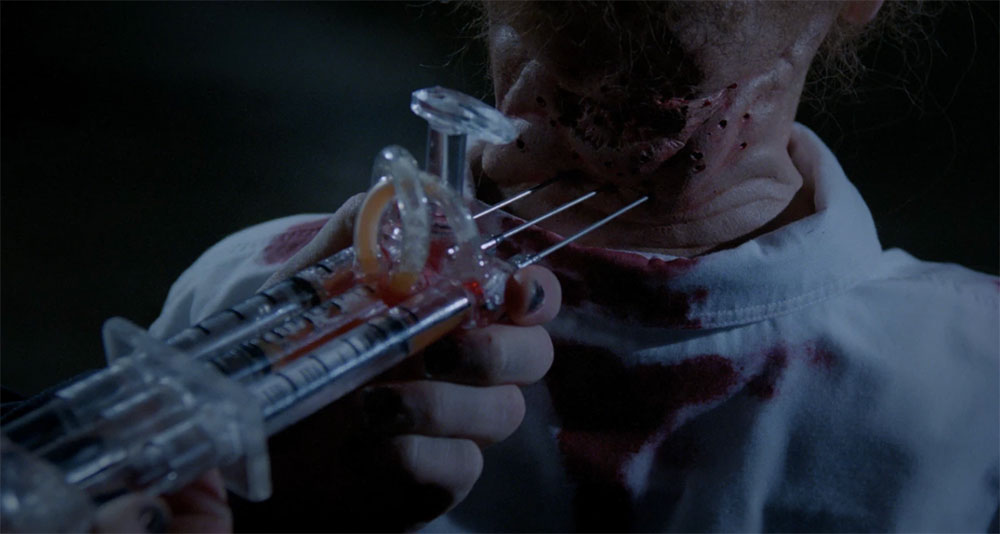 If fans want in-depth stories about the making of HELLMASTER, then jump to the 25-minute interview with Michael Goi, who has become famous for his cinematography work on “American Horror Story.” Goi, who supervised the restoration of the film, talks candidly and with some passion about making the movie. He’s able to provide some insight into the movie-making experience that is not offered up by either of the commentary tracks.

The disc also offers up a conceptual artwork gallery, highlighting some amazing pre-production drawings of the mutants. The gallery also includes some of the movie poster art for its various releases in the home video market. The stills gallery shows some behind-the-scenes photos during the making of the movie. Both galleries have a running time of just under two minutes. 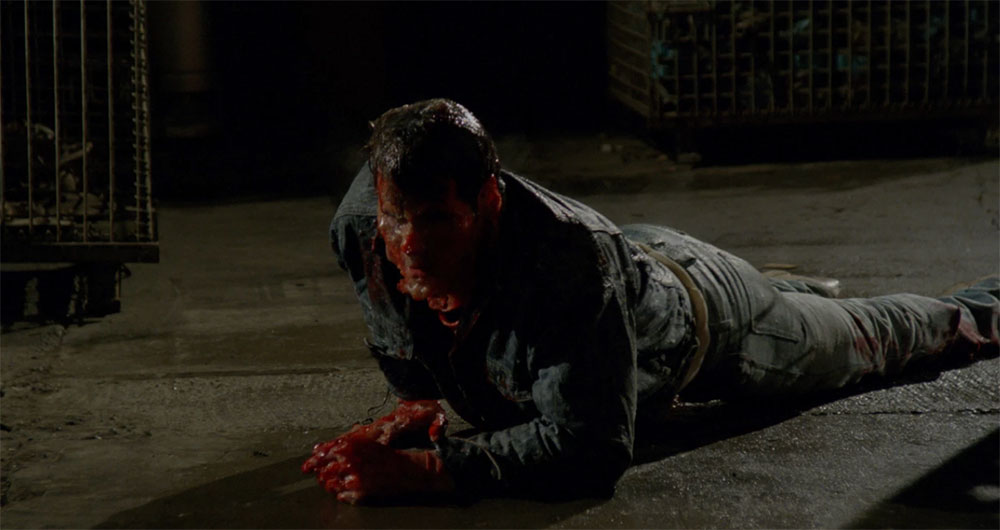 I can’t recommend HELLMASTER a.k.a. THEM as a movie watching experience. Fans of John Saxon and DAWN’S Flyboy, David Emge, will certainly get a kick from adding this movie to their collection. HELLMASTER has more to offer fans of special effects and makeup work, than casual fans of horror.

Vinegar Syndrome does what they always seem to do. They take an underseen or forgotten cult movie and create a special release for it. The only drawback of this home video release, in my opinion — as crazy as it sounds — is that it doesn’t contain additional cuts of the movie. Schulze states that due to past home video and cable TV releases, multiple cuts of the film exist. It would have been a treat to see how multiple cuts of the same film improve or worsen the film.