With a great chemistry among the cast, “Nekrotronic” blasts screens with a fast moving, action-packed bonanza that is an undeniably fun ride! 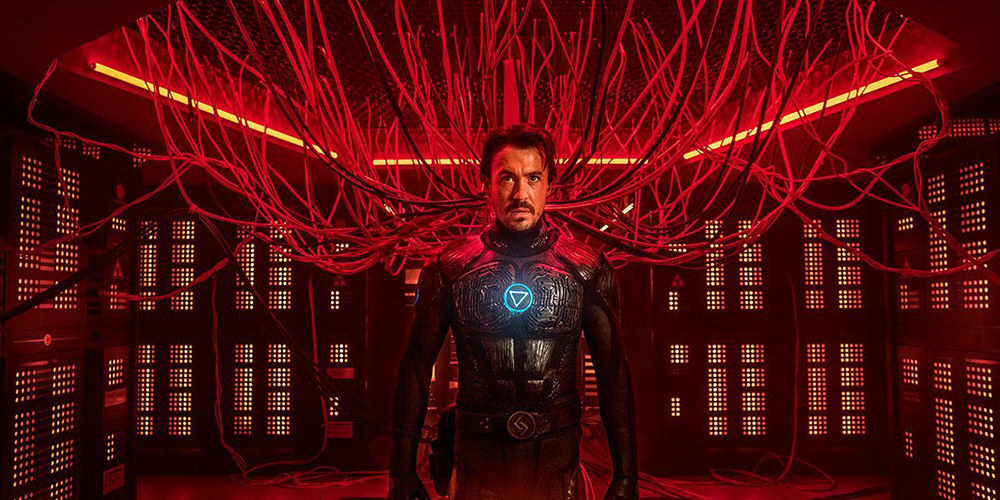 “Someone, somewhere figured out how to do this,” is the explanation given in the opening sequence that tells the centuries long, war filled history between the Nekromancers and demons, and how demons can now travel through the internet to possess people. This is followed by a modern day scene showing two guys working for a waste removal service with the company motto of ‘We Take Your Crap’ written proudly and largely on the tank of  their truck.

This is the kind of film that Nekrotronic is: logic and meaningful back story be damned, we’re here to have fun! And it’s the full on embrace of such cartoonish, comic book material that is precisely why the film succeeds. 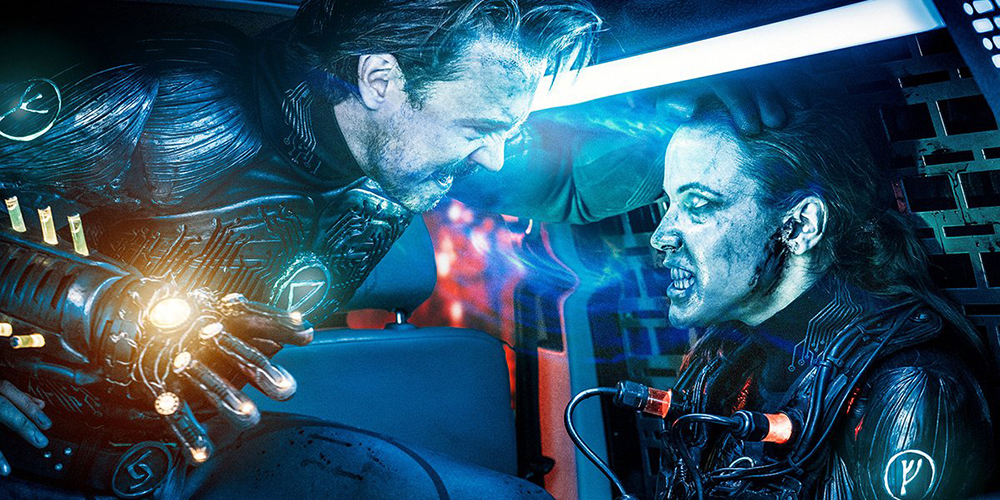 I won’t beat around the bush here, Nekrotronic is so much damn fun!

The film offers a lot of fast moving action as our unlikely hero, Howie, (Ben O’Toole), is forced into a world of fighting demons alongside the other Nekromancers while he finds out his heritage is linked to this ongoing war in ways he could have never imagined.

By his side are Molly (Caroline Ford) and Torquel (Tess Haubrich), two seasoned Nekromancers who show Howie the ropes of what it is they do as they track a very powerful demon, played by a scenery chewing Monica Bellucci. 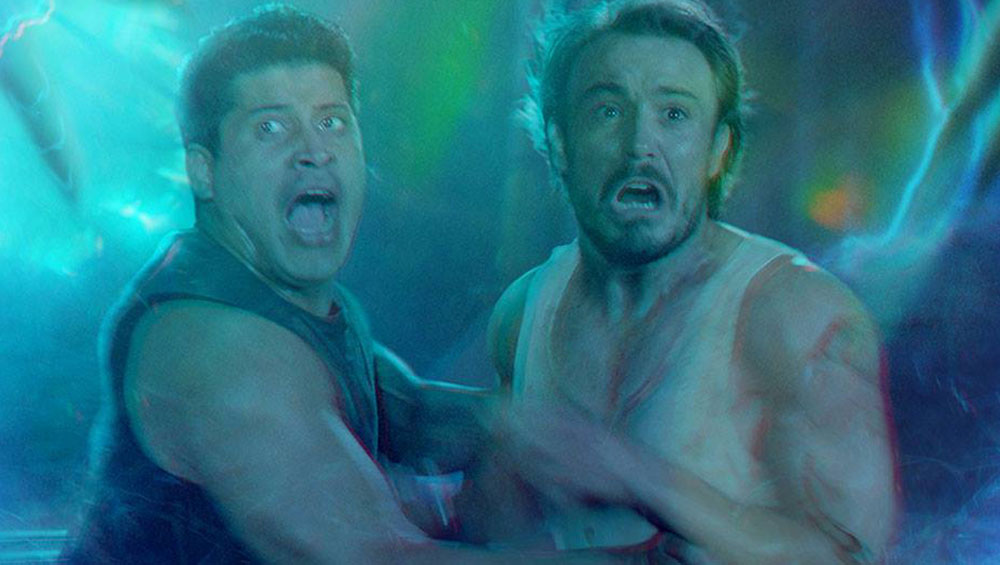 The three actors have a strong chemistry that make this trio a complete joy to watch and makes the comedy hit more times than it misses, offering plenty of laughs throughout. There’s a wonderful moment as a big fight scene approaches when all three characters talk to each other but towards the camera explaining and walking through their plan together in a fast moving, cut heavy, time hopping sequence.

It’s a fun breaking of the fourth wall that winks at the audience and boldly and rhetorically asks, “isn’t this bullshit fun?” And the answer is an enthusiastically agreeable and wide-eyed, head bobbing, “YES!” 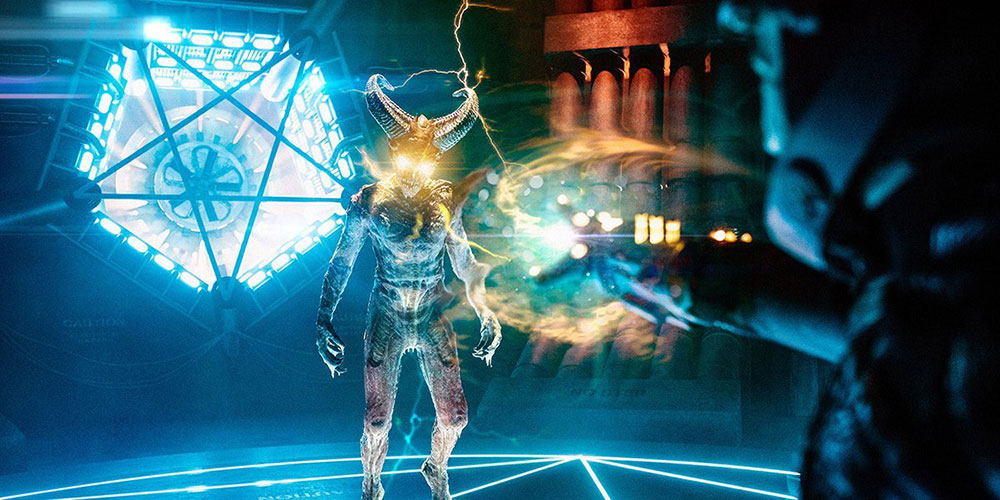 The stellar special effects bolster the tone of the rest of the film by being colorful and flashy.

Often practical with great gooey and infected looking detail, the demons appear to be smoothed out and embellished with CGI for a more slick appearance and charged up with fittingly digital characteristics. One scene has Howie fighting with a demon and the plagued, possessed look is coupled with quick, almost frame skipping motion that gives the digital traveling demon a video game movement style. This really amps up the action and the ferocity of the demons. They are out to possess and kill!

Nekrotronic doesn’t hide its many influences. It instead wears them proudly on its sleeve and is having fun doing so. 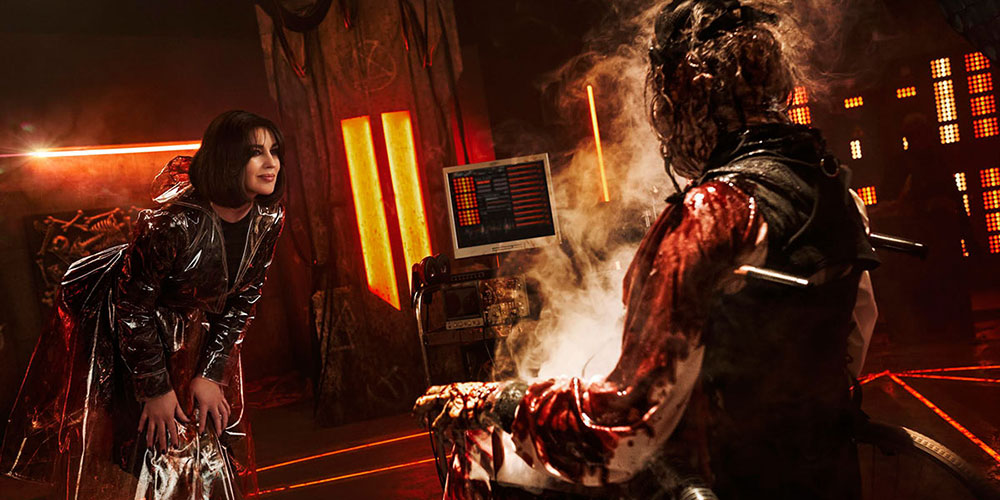 There’s a lot of Ghostbusters-like technology in the way they capture and contain demons, Men in Black-style adventure fighting hidden invaders on Earth, and Star Wars-like themes in the way Howie is closer to the battle than he thinks. I also noticed nods at Hellraiser, Tron, The Matrix, Species, and even The Exorcist.

All of this meshes into a fantastically fun movie with loads of action, loads of color, loads of laughs, and loads of entertainment.

NEKROTRONIC may not stay with you very long after watching it. But until the end credits roll, it’s entertaining as hell. And that’s more than worth the cost of a rental. So beat the heat and fill your darkened Summer night with starburst colored digital demon hunting at it’s finest.

Nekrotronic is non-stop entertainment made for late night viewing. Be sure to give this one a watch.