“Why do they keep making sequels to bad movies? I kinda liked the first one!” Volumes of Blood: Horror Stories 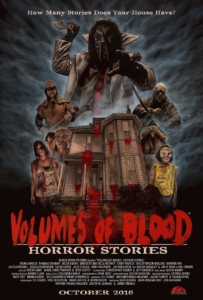 Over the Halloween weekend the new Volumes of Blood: Horror Stories premiered for the very first time at the Owensboro Convention Center in Kentucky. The original Volumes of Blood from 2015, was five interwoven horror tales set in the Owensboro Library. The slasher anthology gathered friends telling about their own versions of urban horror legends that all had deadly consequences and an ironic twist at the end.

Volumes of Blood: Horror Stories is the newest member of the Volumes of Blood family. Volumes of Blood: Horror Stories is also an anthology, this time with 7 stories of horror that revolve around a haunted or possible cursed house, in the same neighborhood as the first film. Now right off, if I was looking for a house, I might not consider Owensboro after seeing these movies. It seems like the city has a few slasher problems! There is definitely a lot of blood spilling in this town. Maybe that is the fault of our producers P.J. Starks and Eric Huskisson! They are the ones that brought this anthology of horror to town. But I digress. It’s just a movie, right? There are no monsters in Owensboro. So, what is the movie about, you ask? 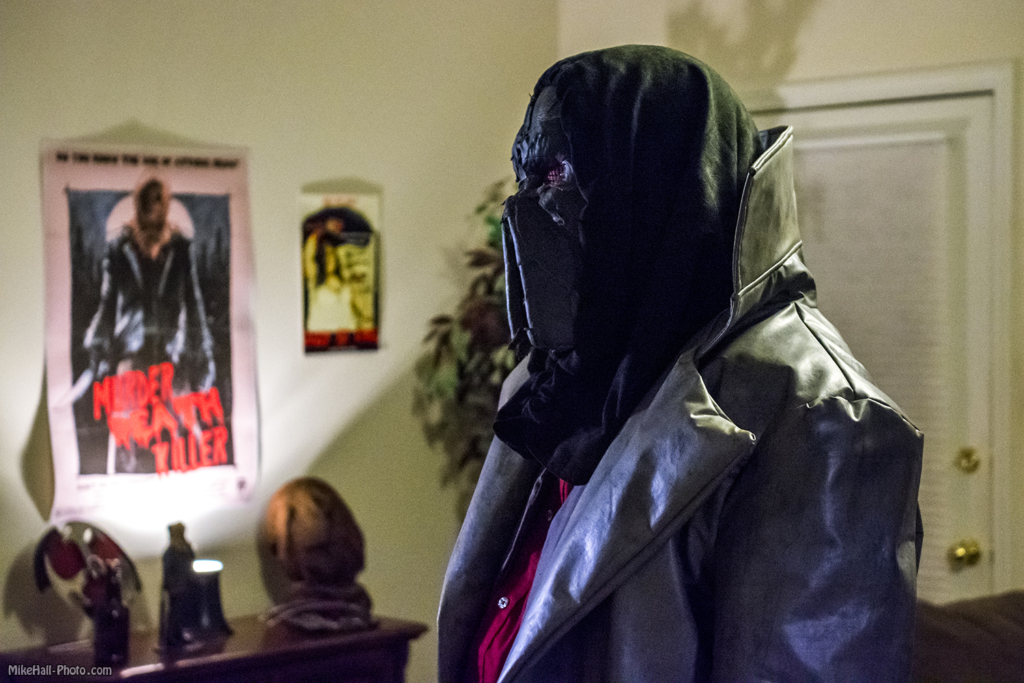 The synopsis: A couple plan to purchase an old home, but would like one last tour before the closing. They’re guided around the estate by a creepy realtor that may have more in store than they bargained for. Searching floor by floor, they begin to discover the remnants of its sordid and terrifying past. P.J. Starks’ mission in own his words was “to make the best damn anthology of 2016”.

Says Starks, “It started as a passion project for a bunch of horror fans that wanted to make a horror movie for horror fans. ‘Volumes of Blood: Horror Story’ is a sequel that has not only likable characters, great plot lines, but all the insane over-the-top practical gore FX that you can shake a bloody stump at.”

I got a chance to see the movie this weekend, and Volumes of Blood: Horror Stories lives up to its predecessor and brings on the blood, guts and rock n’ roll even harder that the first movie. It was definitely darker than the first edition and cut off a lot of interesting body parts. I shouldn’t have had this much fun, watching this much gore, but I did! 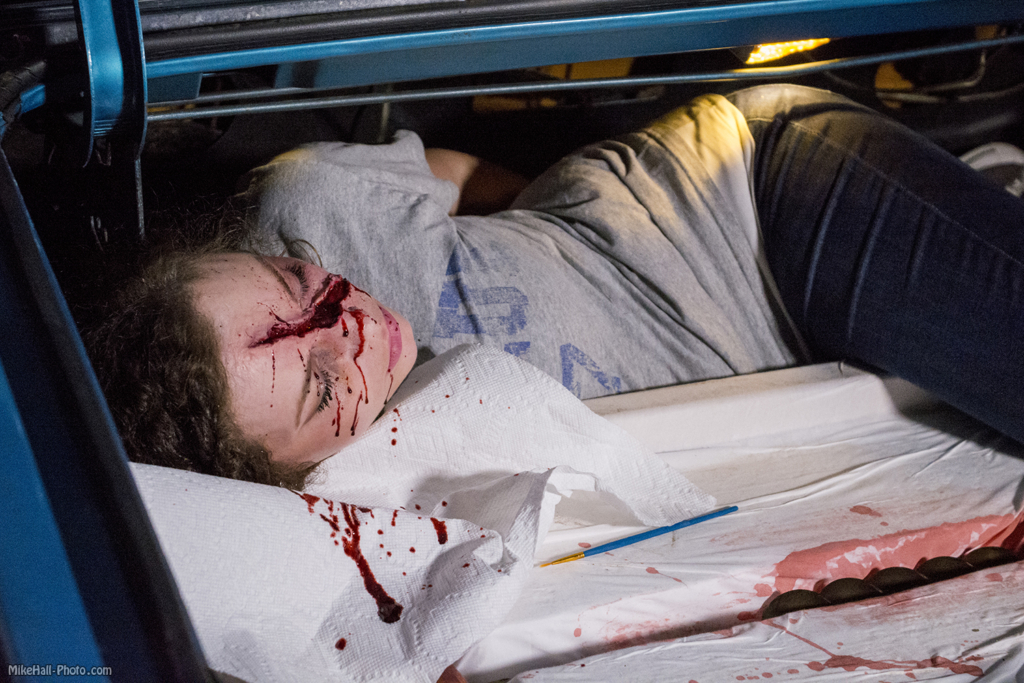 It was great to see some familiar faces in the film. It also includes a lot of new ones, including “The Walking Dead”s Moses Moseley (You might remember him as one of Michonne’s walker pets), along with original music from Rocky Gray (Evanescence) and a new single from the death metal band Soul Embraced. Directors this time are Volumes of Blood veteran Nathan Thomas Milliner, along with newcomers Sean Blevins, James Treakle, John Williams Holt, Jon Maynard and Justin Seaman.

The movie starts out with us getting to know about an urban legend in the area. There was a boss that did a very bad thing to one of his employees, including making him into a scarecrow. Now the scarecrow comes back at night to haunt and kill at the warehouse and, in this case, the thieves attempting to rob it. When this story morphs into it being the remake of another movie, and then that movie is being watched by the victim in the next scene, and the next scene, I was really surprised; A movie within a movie, within a movie. Pretty cool.

One thing about VOB:Horror Stories that I really enjoyed was how amusing some of the characters were, even when they were technically monsters. There were some very twisted moments in the film, and they are very effective. It’s hard to dislike a guy whose wife loves him enough to bring him a girl to cut up for his birthday, or a monster who gives you what you asked for when he said “Trick or Treat” and you said “Treat”. Was the guy in the bathroom crazy or was the bathtub really eating all his friends? 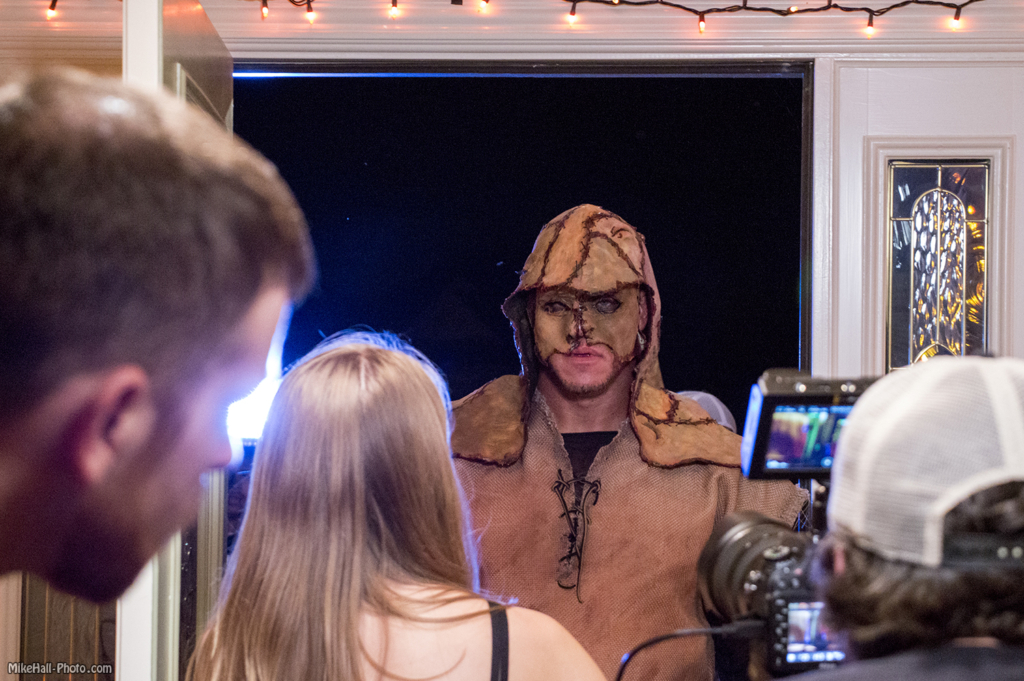 Another part I liked was the way the movie went from one scene to another when the realtor took the couple from room to room. We got a chance to see what happened in each room and why the price on the house is so low. I think many of the customers never get the chance to buy, they just stay.

My favorite part was