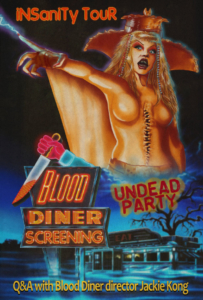 Austin, Texas was proud to kick off Jackie Kong’s BLOOD DINER Insanity Tour Screening and Undead Party at the local favorite venue of the Spider House Cafe, located off Guadalupe within the University of Texas Campus district.  The capitol of Texas boasts a large number of Horror fanatics and is home to Blood Over Texas, Austin Horror Society, and Zombie Life Television and Podcast, which combined serves as a massive epicenter for genre die hards. Austin is definitely one Horror loving community, and Jackie did well in choosing the weird and whacky Bat City as Ground Zero for her light hearted gore fest.

In 1987, BLOOD DINER, the irreverent and groundbreaking addition to the annals of Horror was unleashed upon the world.  It was a magnificent example of what a woman behind the camera can accomplish. Written by Michael Sonye and directed by Jackie Kong, the film is about two cannibalistic brothers in charge of a run down diner, who partake in blood sacrifices and serving up victims to their unsuspecting patrons in hopes of awakening a dormant Egyptian Goddess named Shitaar. 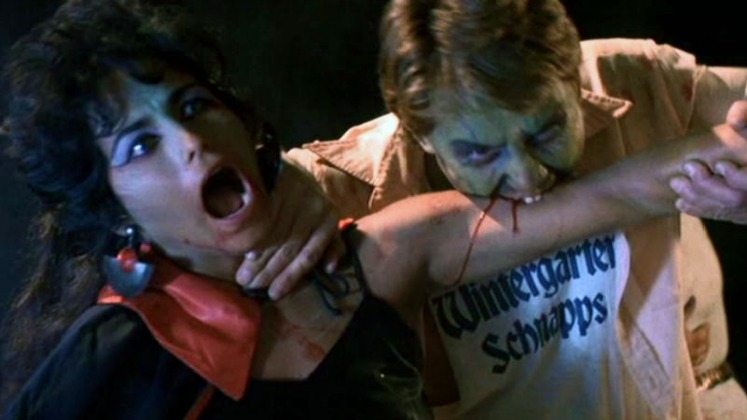 The film is a rarity in its unapologetic, brash and dark humored nature, unparalleled in its delivery. Perhaps this is why BLOOD DINER and CHOPPING MALL were among the first two titles given the inaugural Blu Ray treatment via Vestron’s extensive library of films. In part celebration of the Blu Ray release, part fan meet and greet, and part fundraiser for her upcoming dark comedy Lost In Vietnam (a spoof on War films), the BLOOD DINER Insanity Tour is visiting a limited number of cities across the country. 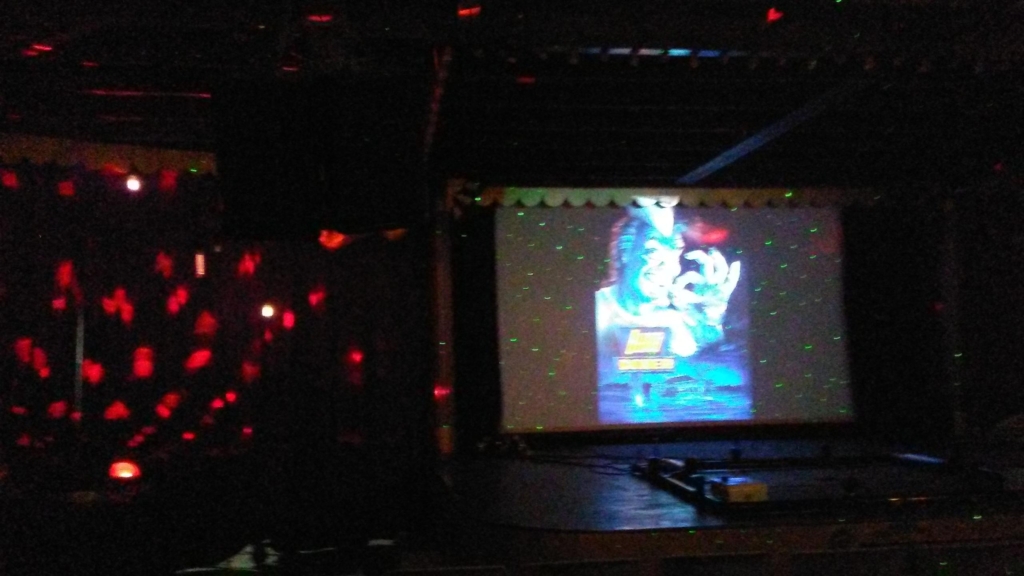 Filmmaker Jackie Kong, as we learned during her Q & A following the screening, was just as brash during the making of BLOOD DINER.  She shared that she was young, but not completely inexperienced or naive, during the three weeks of filming the horror/comedy that has become a fan favorite. She was simply a woman who knew what she wanted out of her crew and production in general and was unwilling to make a of number of creative compromises (the gore was too much for some Canadian Provinces, becoming banned in a few).

We should all genuinely thank Jackie Kong for being so solid and imaginative, helping to pave a road less traveled for other female filmmakers while creating a much celebrated cult classic. BLOOD DINER evokes nostalgia for early 80s entries into fright filmmaking, and it’s one hell of a conversational piece. 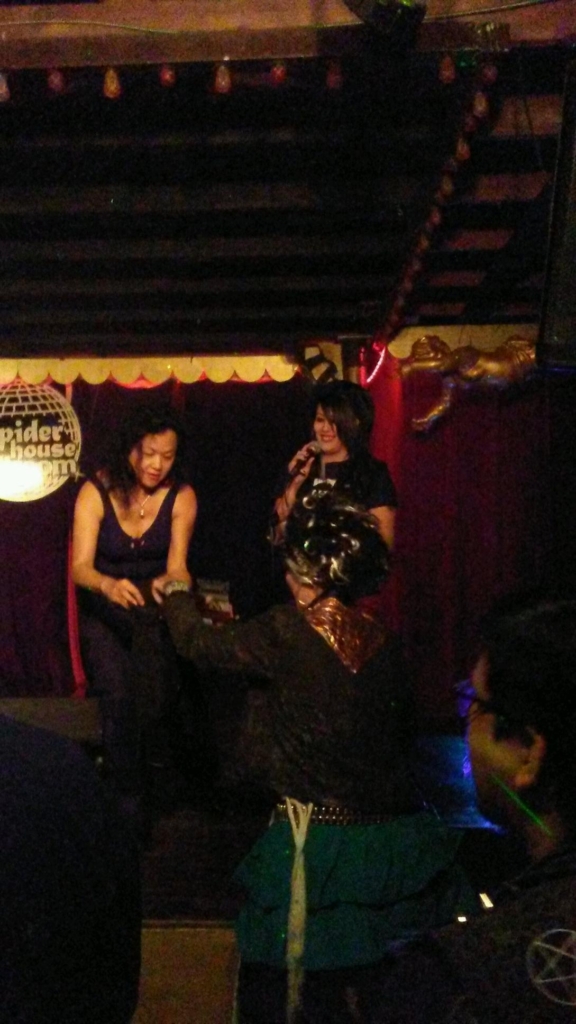 The prestigious Etheria Film Night, founded by former Viscera Film Festival staff members Heidi Honeycutt, Staci Pippi Hammon, and Kayley Viteo, awarded Jackie Kong the coveted Inspiration Award in June of this year at their event celebrating all things female driven in genre filmmaking.  Taking her well deserved place among the ranks of Jane Espenson (2015 winner, known for the 1997 film Buffy the Vampire Slayer) and Lexi Alexander (2014 winner, known for the 2005 film Green Street Hooligans), Kong graciously accepted the high honor. I asked Kong how it felt to be awarded such a milestone achievement. She reflected for a moment, smiling warmly as she replied, “Well, it was an honor to say the least.” Despite the short and to the point answer, it did not lack genuine feeling and gratitude.

I volunteered with others to help set up the venue for her screening, and Jackie (in attendance with her husband and daughter) was nothing short of engaging, thankful, and more than friendly. Kong fielded questions from the audience in Austin enthusiastically and honestly. She seemed pleased at the audience participation and all the thoughtful questions genre fans had for her.

Jackie looked at ‘home’ in a sense up on that stage, talking shop and explaining what it was like in the 80s for a woman to think so out of the box, against the grain, and for herself. 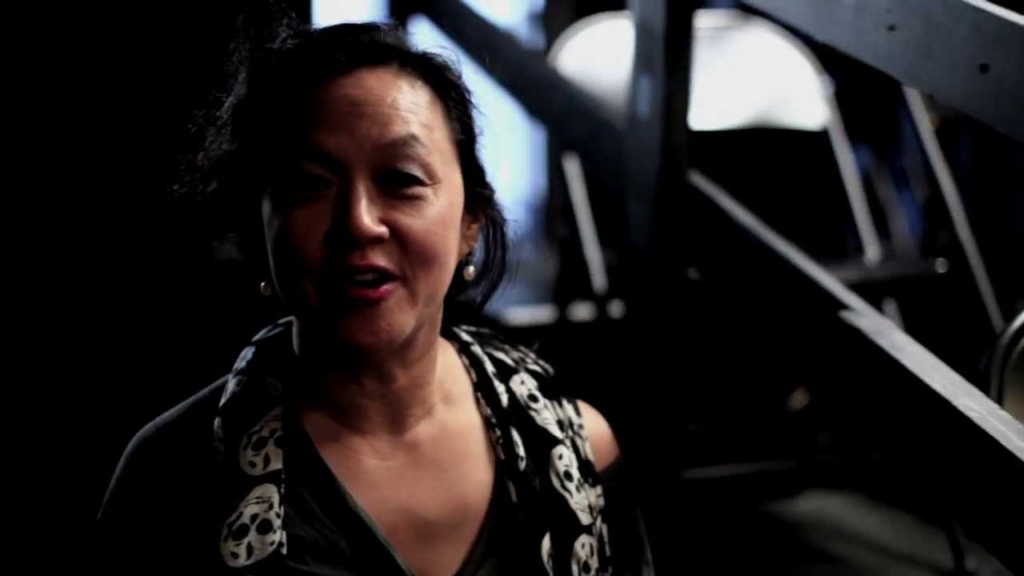 To get a bit personal now, I would like to share a few things. The last couple of months have been incredibly difficult for me, causing me to doubt myself and lose sight of what’s really important. I turned to the works of my personal female filmmaking heroes for inspiration, including Jennifer Lynch, Jovanka Vuckovich, Karyn Kusama, Deborah Hill, and, of course, Jackie Kong. The endeavors of these pioneers, along with the heartfelt chat with Kong following the Texas event, gave me the motivation I needed to keep going…to keep pursuing my filmmaking dreams and to continue to actively support women in horror (and the genre as a whole).

The evening of October 1st in Austin, Texas was incredible. The fans were rabid for an opportunity to meet the cult favorite filmmaker, and she was ecstatic to be there taking pictures, chatting it up, and signing autographs. If you can, check out the stellar Blu Ray transfer of her film BLOOD DINER, visit Jackie’s website at jackiekongfilms.com, and help celebrate one of our great female filmmakers. 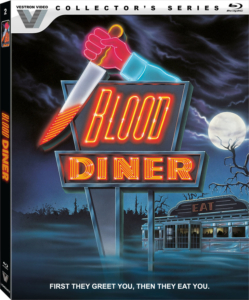