“Scary Stories” is a must see documentary about the beloved, controversial books by Alvin Schwartz that helped shape a generation of future horror fans. 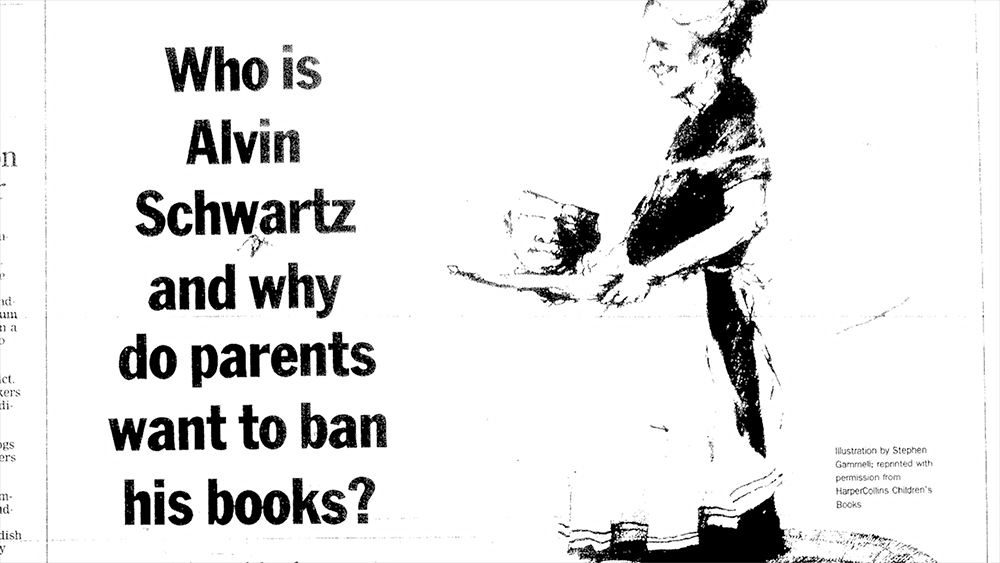 “There was an old woman all skin and bones…”

Readers are — and always will be — denizens of libraries, and that is where this particular journey takes place for so many fans of “Scary Stories to Tell in the Dark” (1981).

Particularly in decades past, libraries were without question a point of first contact with the works of author Alvin Schwartz. Full of novels, periodicals and other media, these locales were arguably the quintessential stomping grounds for young children prior to the saturation of the internet on this digitized day and age.

This article is not a slight or slap in the face to electronic media, which is quite wonderful in its own way. But there is something magical in the hazy corners of boys and girls’ minds who were lucky enough to grow up prior to the advent of the internet and smartphones. 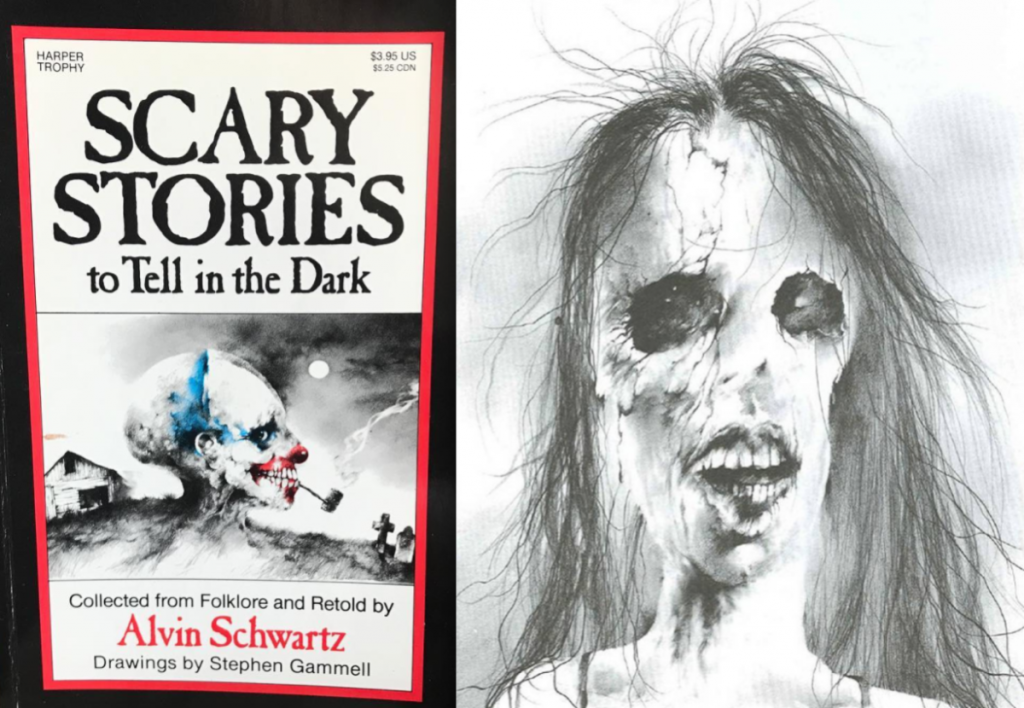 Having to utilize bulky, tangible, leather-bound reference materials like the Encyclopedia Britannica for scholastically required reports often tarnished the allure of such hallowed halls for some students to say nothing of the Dewey Decimal System. Dewey, could you have made finding a book more mathematically improbable? Nonetheless, libraries were to many like a good friend who spent their formative years alongside the avid reader. Libraries were gateways of escapism. Alvin Schwartz’s “Scary Stories” series of children’s books were, and remain, a part of that world.

It was down those crowded library aisles replete with mesmerizing hard and paperback-colored spines— teeming with the rich scent of weathered and often crisply crinkled, brittle brown pages — that the works of Alvin Schwartz were amassed.

Schwartz’s books were the ones prepubescents perused in solitude, or, at least, with one eye slyly standing guard and constantly on the lookout for prying adults. Imagine how taboo it must have been for parents when they discovered their kids were reading children’s horror books. Schwartz gave many youngsters their first taste of the macabre with his “Scary Stories to Tell in the Dark.” But it wasn’t the idea of rebellion that enraptured potential readers. No, it was simply love at first sight, which was in large part thanks to the memorable illustrations accompanying the text.

If you are familiar with Mr. Schwartz, you already realize he is essentially the Norman Rockwell of children’s storytelling. His tales are a satisfying mixture of childlike innocence and horrifying folklore. If you’re not quite up to speed on the literary accomplishments of Schwartz, filmmaker Cody Meirick has you covered with his excellent, in-depth documentary Scary Stories (2019).

Scary Stories is a love letter to Schwartz’s inventive prose which spans nearly 60 titles during his 30-year career. 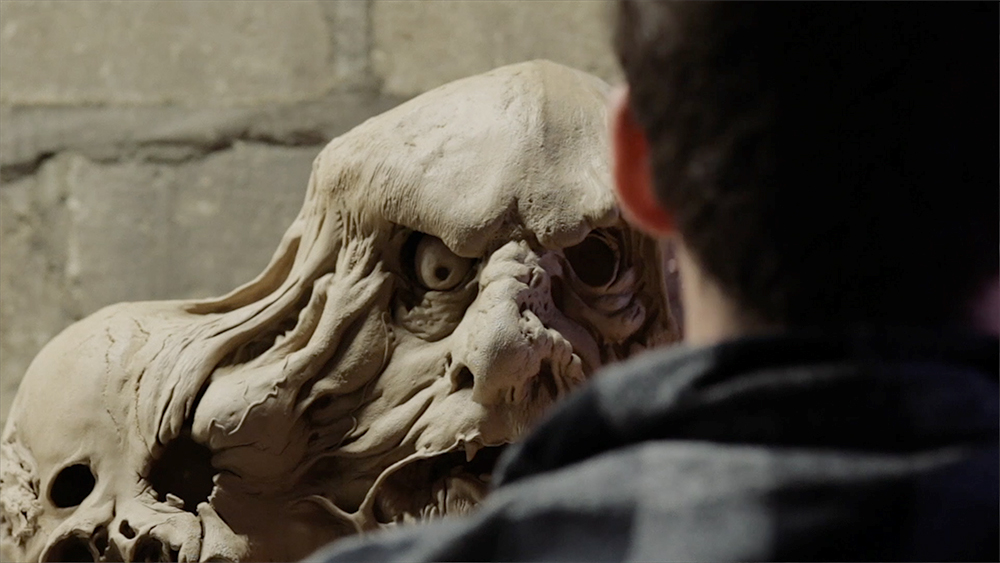 According to the documentary, which is rich with diverting information about Schwartz’s personal and professional lives, over seven million copies of “Scary Stories to Tell in the Dark” have been sold. It also holds the distinction of being ranked No. 1 on the list of books most banned in the 1990s.

The segments of the documentary featuring Vanderburg stand out because they pervade the long battle waged between horror fans and those who dismiss the artistic value of scary storytelling. What the latter — Vandenburg — doesn’t realize is that controversy often aids the artform, any artform. The cliché of bad publicity is better than no publicity is a longstanding fact. So, Vanderburg inadvertently helps promote “Scary Stories to Tell in the Dark” and its sequels thanks to her objection to such art. 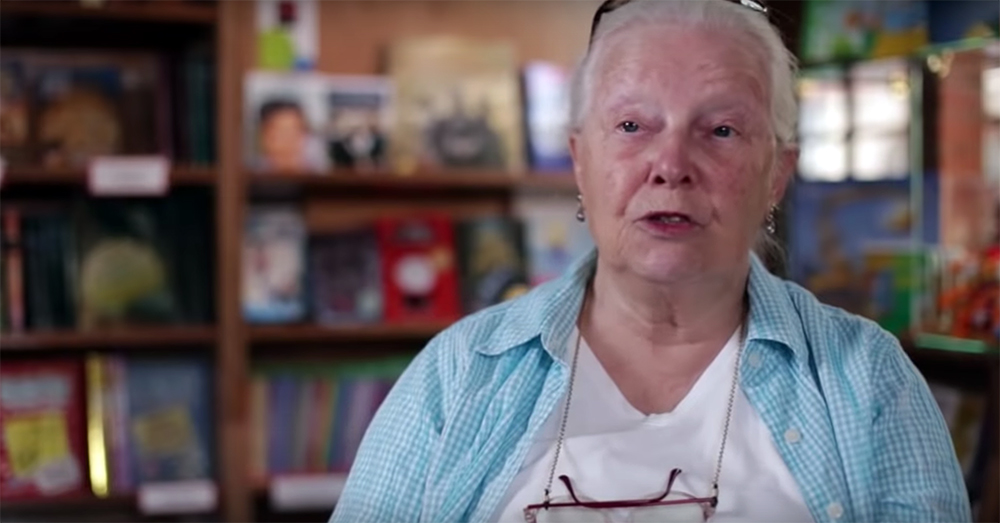 “Alvin was thrilled at the publicity he got from his books being banned in some places,” Barbara Schwartz — wife of Alvin Schwartz says in the documentary. “He just thought that was wonderful.”

During one of the modern-day discussions between Vandenburg and Schwartz’s son Peter, which appears near the end of the documentary, Ms. Vandenburg explains that she wasn’t trying to ban the books from everywhere. Rather, she was concerned with the “Scary Stories” titles being available to elementary children.

This interaction between Schwartz and Vandenburg gives audiences a glimpse into the expertise Meirick possesses even as a fledgling filmmaker. 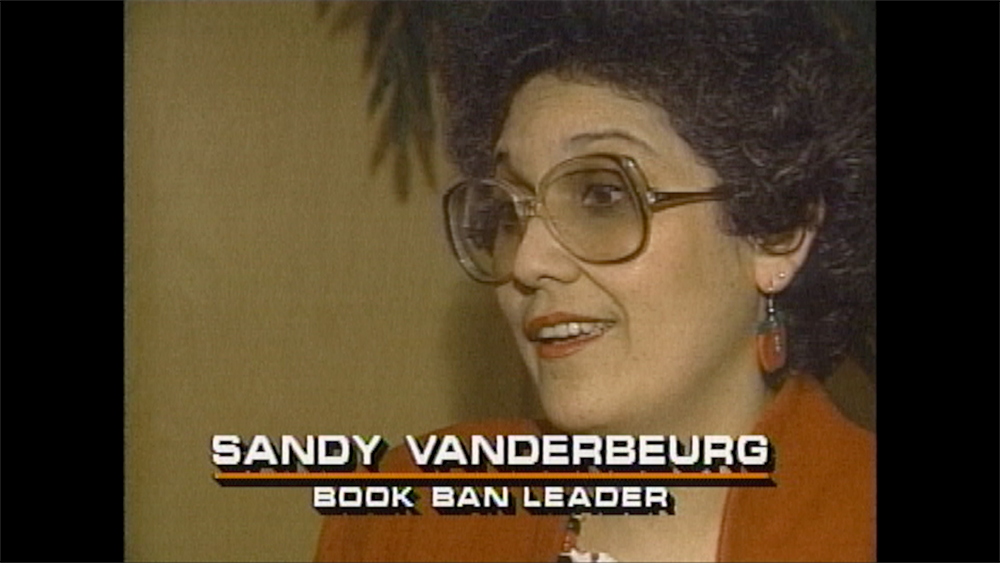 Weaved throughout the documentary are the stories of both Vandenburg’s attempted censorship of the “Scary Stories” series and Peter’s strained relationship with his father. Meirick structures these narratives in such a way that Peter and Vandenburg battle beyond their respective conflicts to arrive at a storytelling climax featuring the two juxtaposed documentary participants. And in a very encouraging light, Schwartz and Vandenburg have a friendly, warm-hearted talk about both the censorship controversy and Alvin Schwartz himself.

Storytelling is so important even in documentaries, and Meirick really shows off his skillset here. 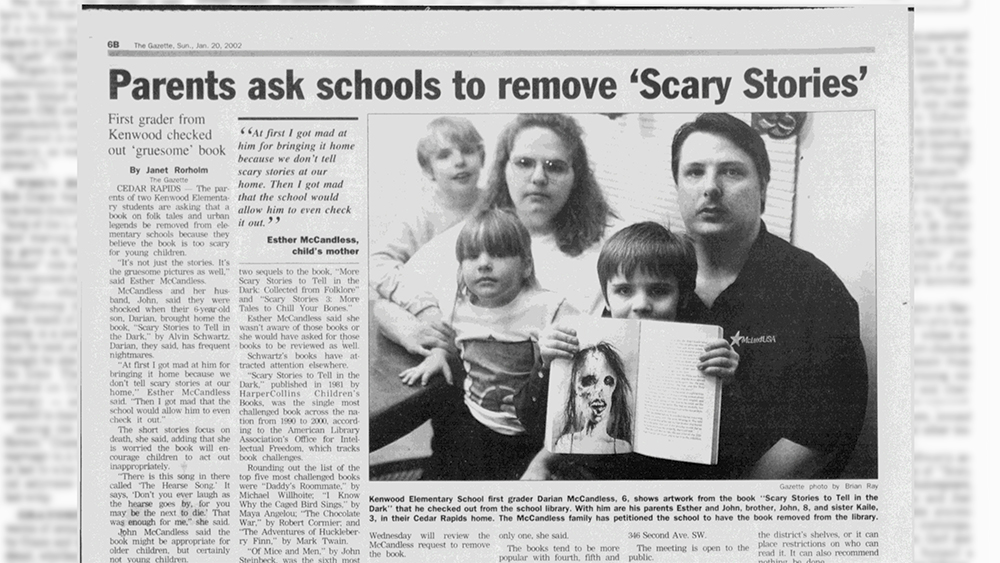 In terms of execution as a filmmaker, Meirick is also able to the task. One of his better moments as a movie artisan comes when he introduces the idea of children loving horror through images rather than dialogue. Viewers will see an old commercial for Count Chocula (Larry Kenney impersonating Bela Lugosi) and Franken Berry (Bob McFadden impersonating Boris Karloff) cereals followed by a television ad for Creepy Crawlers: Thingmaker II (1978).

These advertisements shown back-to-back fashion a very specific imagery which alludes to not only children’s fascination with horror stories, but how the advertising companies of the time were acutely aware of the marketplace and exploited it. 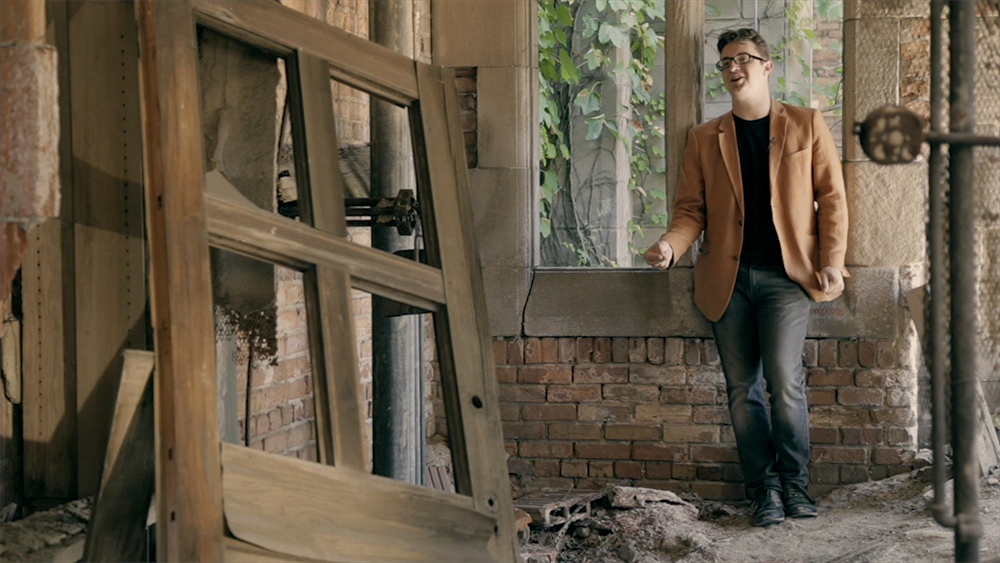 Again, this advanced filmmaking technique used by Meirick is top notch. It demonstrates his knowledge and craft to “show” something on screen — and that’s the purpose of motion pictures — rather than telling viewers with words (superimposed or dialogue). These ads tell the story visually: excellent moviemaking.

Scary Stories features interviews with a few lesser known artists, including Sarah Benkin, Chris Larsen and Adam Selzer (The Ghosts of Chicago: The Windy City’s Most Famous Haunts, The Smart Aleck’s Guide to American History). Their collective commentary on the impact of Schwartz’s work is interesting, and even insightful.

But the meat of the documentary’s success is at its pinnacle with the featured discussions of Schwartz’s family, particularly his son. 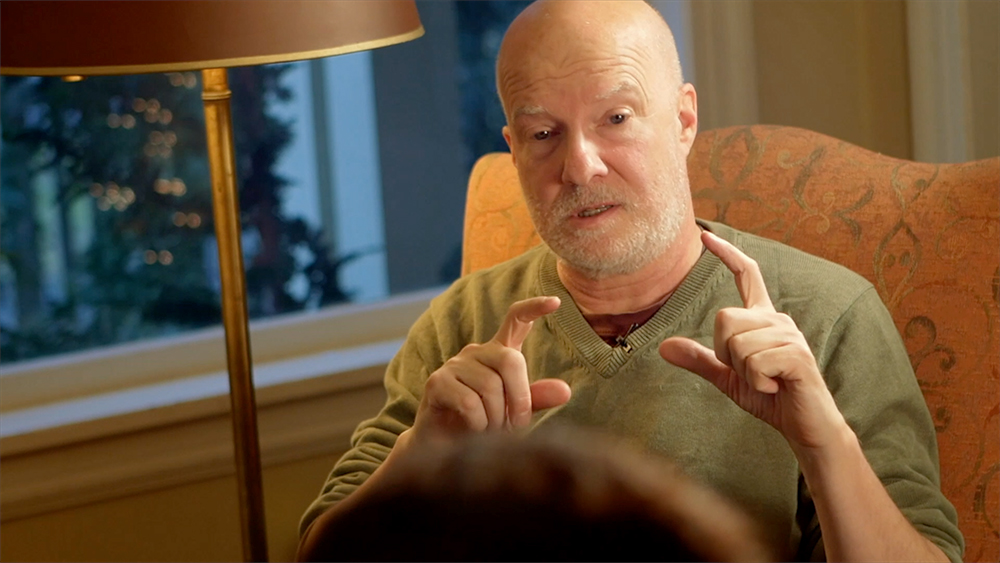 “He didn’t actually live to see most of his success,” Peter said of his father.

But even Mr. Schwartz’s offspring wasn’t sold on his father’s most lucrative accomplishments.

“None of them were really books I would have read myself,” Peter continued as he poured through photos and memories of his father. 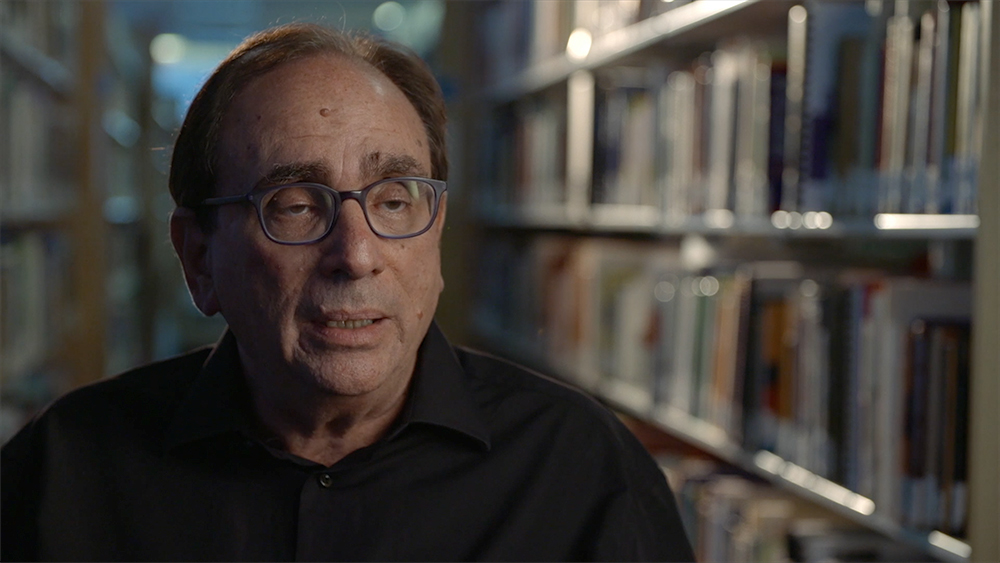 “People call me Stephen King for kids,” Stine says in the documentary. “And, actually, I’m very flattered by that.” Stine also recalled meeting King at the Edgar Allan Poe Awards.

“Steve, you know, I was once called a training bra for you. And he said, ‘yes, I know,’” Stine recalls.

The black-and-white animations popping up throughout the documentary, which bring to mind the wonderfully creepy illustrations of Stephen Gammell, are created by the talented Shane Hunt. Hunt’s work is rich, sweeping and devilishly decadent. His artwork not only feels like an homage to Gammell, but it transcends the typical fan art you might stumble upon on Instagram, other social media or indie websites. 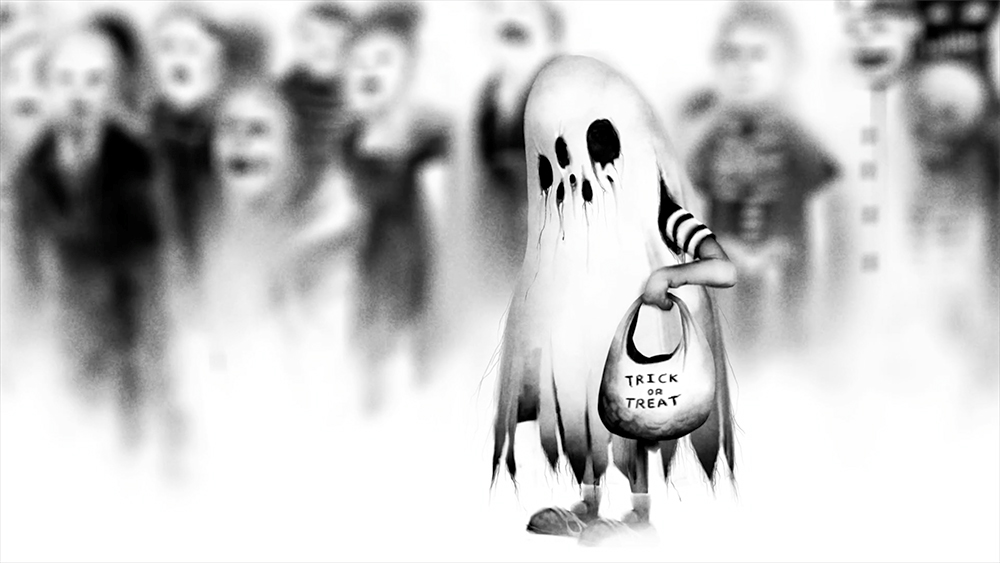 Hunt is a true credit to Scary Stories, and be sure to look for his upcoming Kickstarter campaign “Scary Stories: A Tribute to Terror” later this year.

The documentary clearly devotes large chunks of its 85-minute runtime to the influence “Scary Stories in the Dark” had on an array of different artists (sculptors, photographers, illustrators, painters and tattoo artisans to name a few).

But the Scary Stories documentary is at its best when the film focuses on the interviews and facts specific to author Alvin Schwartz. 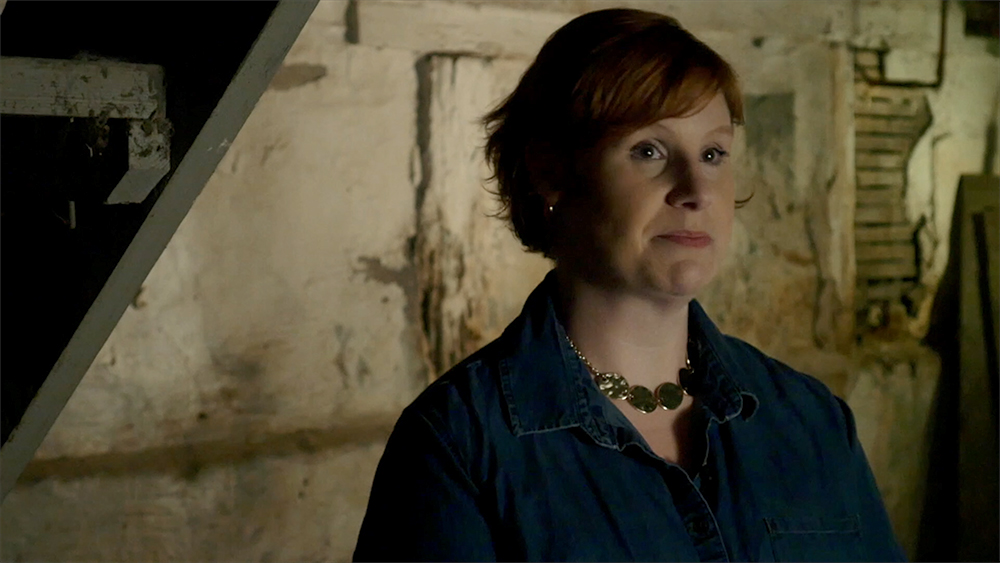 One of the only notable moments of weakness occurs with the docudrama-like sequences of a young woman aka the Storyteller (Katy Nielsen) telling the Child Listeners (Mia Moore and Amelia Resendiz) scary stories. These seem contrived, out of place and probably should have been cut for pacing purposes. Fortunately, these segments only appear a couple of times near the midpoint of the documentary.

Nielsen, Moore and Resendiz do fine work as actors, but the scenes feel like straight-up filler — structurally — that does nothing to expand the storytelling or artistic merit of the project.

In conclusion, Scary Stories is a wonderful addition to the growing number of documentaries focused on the horror genre — regardless of the media — including You’re So Cool Brewster! The Story of Fright Night (2016), Crystal Lake Memories: The Complete History of Friday the 13th (2013) and Never Sleep Again: The Elm Street Legacy (2010). 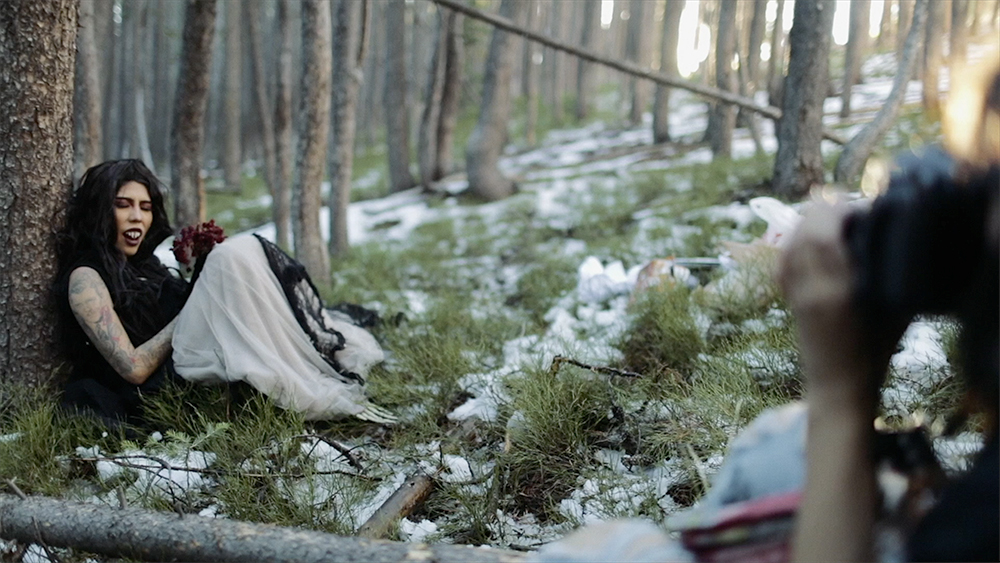 “Scary Stories to Tell in the Dark” is classic children’s literature, as are the sequels, and Meirick’s documentary shows a devoted love and knowledge of Schwartz’s wonderfully-written tales. The examination of censorship where literature is concerned is at the forefront, and the documentary ties that theme together wonderfully with the impassioned interviews.

Perhaps most poignant is the exploration of the estranged relationship between the late Alvin Schwartz and his son Peter which will resonate with many viewers. Don’t miss this must-see documentary. And be sure to read Schwartz’s books, if you haven’t had the pleasure. They remain relevant and utterly enjoyable for all age groups.

Scary Stories debuted in select theaters on April 26 via Wild Eye Releasing and will be available on VOD starting May 7. Expect a DVD release on July 16.