I was fortunate enough to meet Brian Harris via email. Brian, along with his partners, has been publishing print magazines for years. They’ve sold well over 10,000 copies of their magazines, earned several Rondo Award nominations, and are preparing to release their first “creator-owned” book project.

Brian is the editor and publisher of Weng’s Chop Magazine as well as the publisher of Timothy Paxton’s Monster! He was kind enough to send me a copy of each of the publications for review.

Monster! is published monthly. It’s the smaller of the two publications and focuses exclusively on monster movies, with much of the content devoted to reviews of older B-movie/monster movie horror classics. We reviewed the Spring Special (Issues 28/29) — 215 pages of insightful reviews and articles on the history of horror cinema, plus beautiful black and white movie stills and classic movie posters.

This publication has a great nostalgic vibe, reminiscent of the classic Famous Monster of Filmland Magazine. The issue I reviewed had a huge section on H.P. Lovecraft movies, which was amazing. I loved the “My Monster Movie Marathon Diary” section featuring a selection of reviews by Christos Mouroukis. 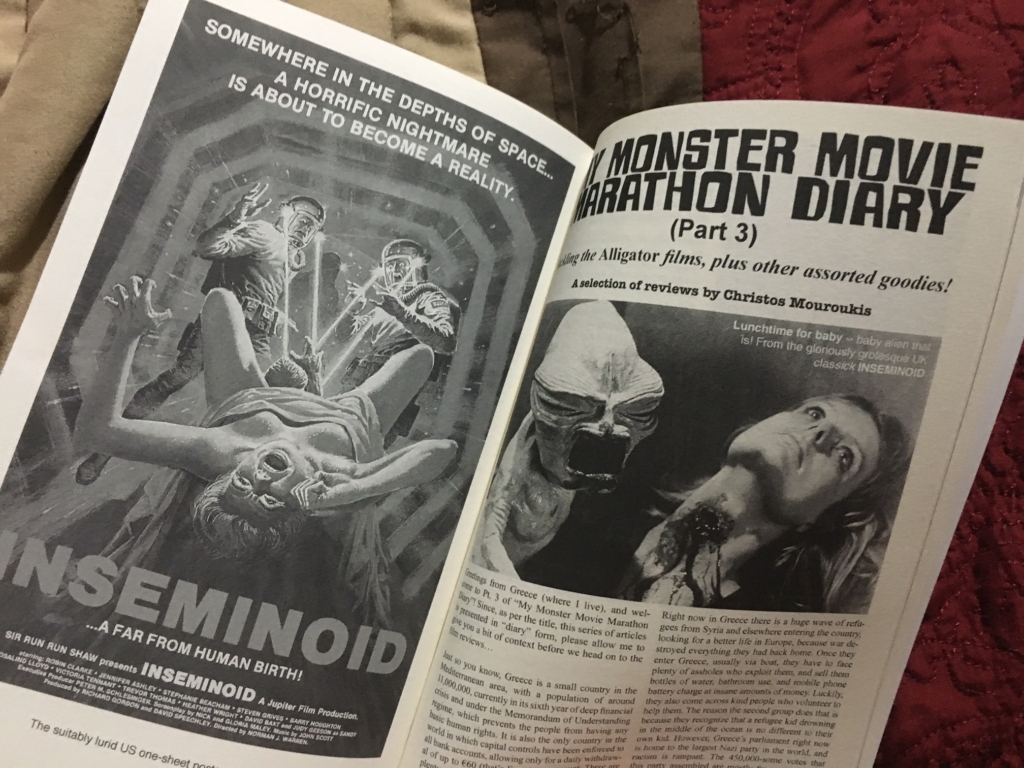 And, perhaps the most amazing part for me was the section at the back of the book called the “Monster! Movie Checklist”, listing the title availability of all films mentioned or reviewed in the issue. This is an amazing resource for fans of monster movies interested in checking out some amazing new titles.

Monster! #30 (June-July 2016) was just released and is available for purchase here. It’s the better part of 164 pages thick, and just as chock-a-block with monstrous goodness as ever. Features include a loving look at the DIY-with-TLC creature features of regional American filmmaker Brett Piper, an in-depth essay on the early works of David Cronenberg, and a moving tribute to the late Vince Rotoio (“King of the Monster Podcasters”). 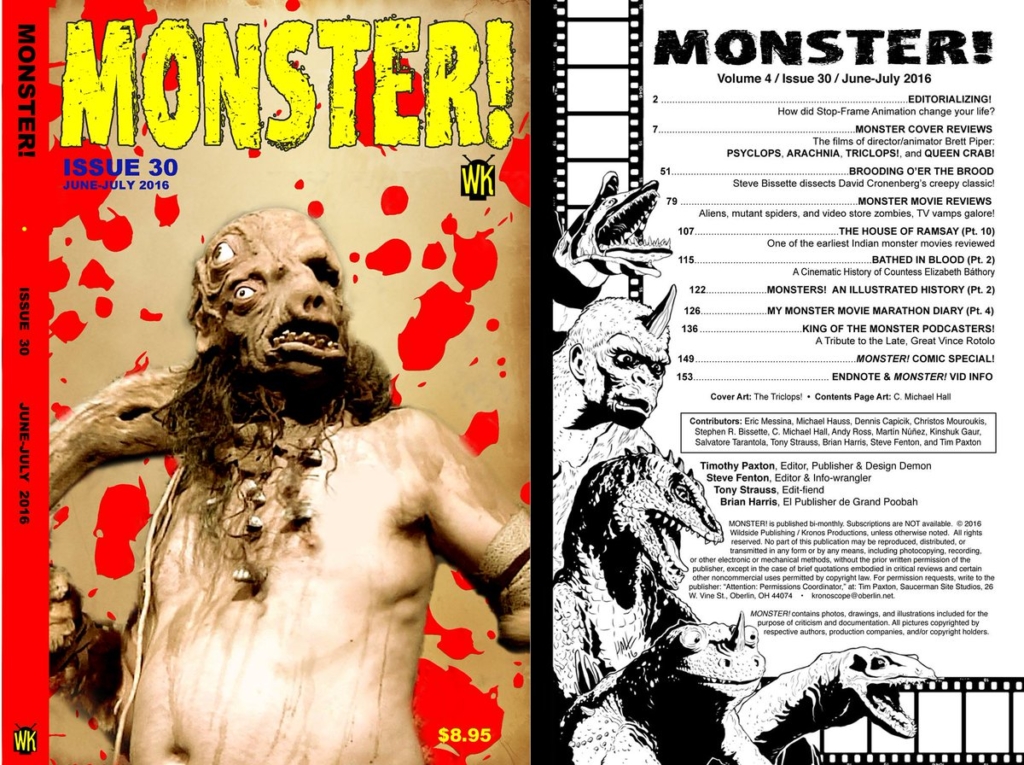 Weng’s Chop Magazine is published quarterly. The magazine deals with obscure, cult, exploitation and horror cinema from around the world. There’s something for everyone in the pages of this stunning 200+ page publication covering horror, gore, exploitation, sleaze, trash, sci-fi, grindhouse, drive-in, underground and low budget films from all over the world and spanning all different eras. 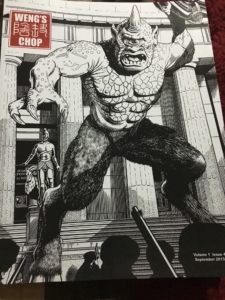 We were lucky enough to review Issue #4, from September 2013, one of the most popular issues featuring a stunning Ray Harryhausen Commemorative Cover with artwork by Jolvon Yates.

This gorgeous book is 218 pages of underground horror happiness — chock full of the most interesting and engaging articles, interviews and reviews you’ll find anywhere. It’s also an absolute visual treat with a nearly endless collection of vintage movie posters, set photos, and gorgeous black and white photography representing the best of cult cinema. If you’re a cinephile, cult film aficionado, and/or horror nerd, this is a must read.

Authored by Brian Harris and Edited by Tony Strauss, this issue includes some truly brilliant articles, including a wonderful tribute to Ray Harryhausen, a look a the odd and unique cinema of Larry Cohen, and a wonderful reflection of the legacy of Sonny Chiba (among numerous others). A couple of my favorite reads included the thoughtful look at the delightfully sleazy eurotrash gold of Joe D’Amato and the genuine B-movie appreciation of “The Stupendous Cinema of Syfy”.

As much as I loved the articles, the interviews really stood out for me. As a graphic designer with a nearly obsessive love for horror and film art, I could not have loved the interview with Graphic Superstar Tim Doyle more. Spanning several pages and highlighting an amazing selection of his most popular and memorable work, this was the kind of thoughtful and in-depth interview you just can’t find anywhere else. 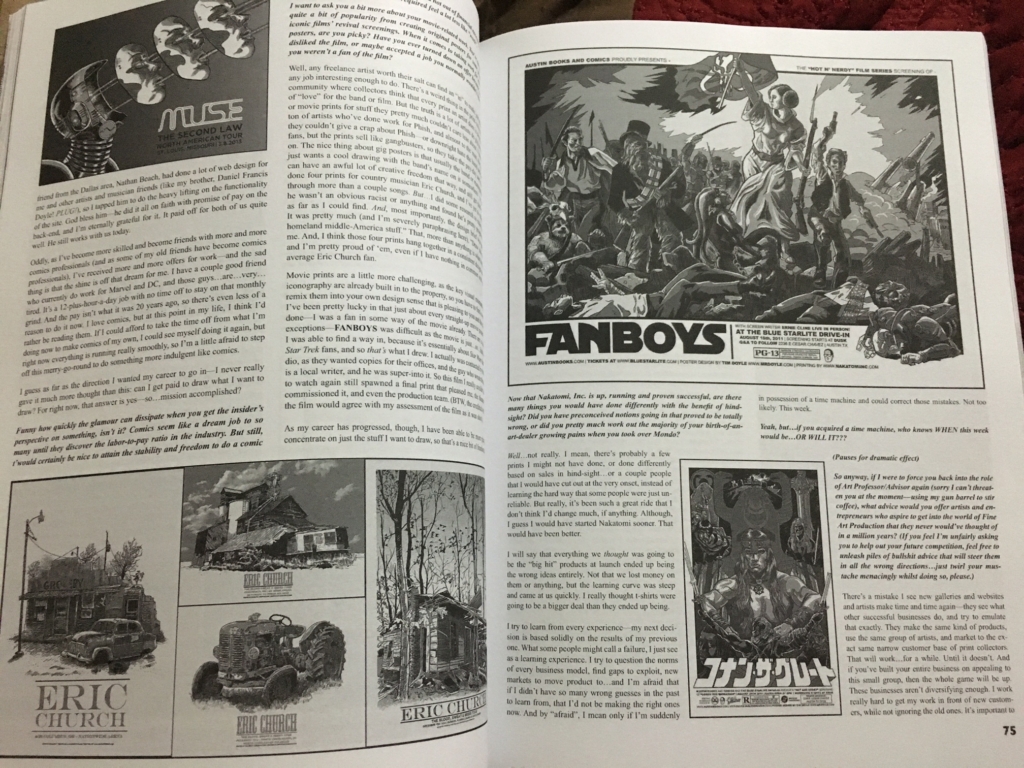 Next up was an interview with one of my favorite modern cult horror filmmakers, Ryan Nicholson, followed by a great interview with Ugandan filmmaker Lubega Vincent — which should give you a great idea of how diverse and unique this publication is.

After the interviews were a series of columns and regular features, all of which were highly enjoyable and entertaining. I especially loved “Box Set Beatdown…Adventures in Bin Diving!” and “Steve’s Video Store”. There’s also some truly great content on Indian Cinema, as well as a look at cult horror classics. 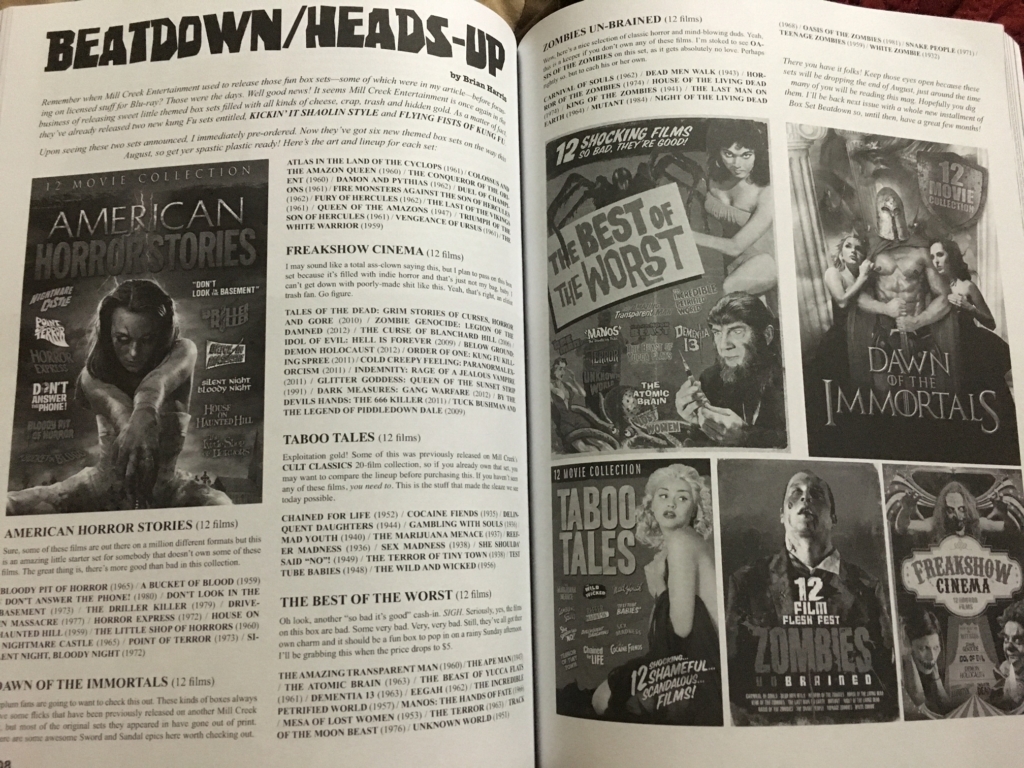 The final section of the book contains a wealth of mini reviews for obscure, cult horror films. I loved this and found it a wonderful way to discover several new, wonderfully weird movies to watch and add to my collection. It’s a great resource for fans of anti-mainstream, anti-Hollywood, anti-establishment horror gems. You’ll also find some great reviews of horror literature. There’s even an amazing B-Movie crossword puzzle that may just be the greatest thing ever.

At the time of its release, Issue #4 was the biggest release ever…and it’s a monster! Far more than simply a ‘zine, this is a book. It offers days or even weeks of great reading material, and it looks stunning on a coffee table or proudly displayed on a bookshelf. And the publication has continued to expand, with each issue offering more exceptional content written by people who really know their stuff. Writers include editors from other popular ‘zines as well as many who have been published in other ‘zines and specialty film blogs (even written and published books) for decades.

This newest issue of Weng’s Chop Magazine, Issue #9, has just been released. And, trust me when I tell you, you NEED this book in your life. Issue #9 is an unbelievable 234 pages of raw, mind-blowing, bad ass movie madness! You can purchase it now from the Weng’s Chop store in the exquisite full color version for $34.95 or the less expensive black and white version for only $12.95. 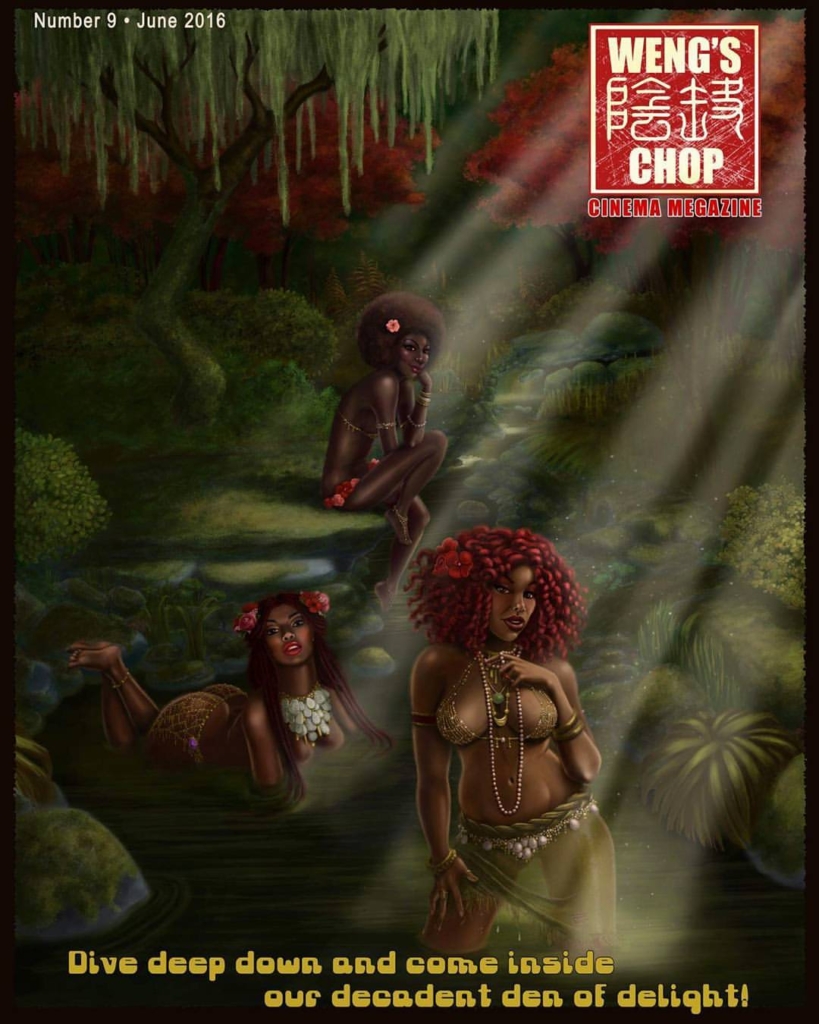 Past issues of Weng’s Chop Magazine are available through wengschop.com, as well as on Amazon in the U.S., Japan, Germany, United Kingdom, Italy, Spain, and France! If you’ve never purchased a copy of this awesome horror/exploitation film magazine, GET TO IT! We promise you won’t be sorry.