Killer recipes that will bring delight to all creatures of the night!

As I am always looking for women in the horror genre to cover, I was really excited when I met Kaci Hansen, AKA The Homicidal

Homemaker, at the recent Midsummer Scream convention. Kaci has been dubbed the ‘Martha Stewart of the Macabre” (with a bit of Rockabilly thrown in) and after watching a few of her entertaining, informative and creepy cooking shows, I can see why. Hansen is the host of her own show on YouTube that is absolutely perfect for horror lovers and cooks of all ages.

She is not new to the horror genre, and many of you may already be big fans. Her YouTube show is already a huge hit since its first episode in February of this year. If you haven’t gotten a chance to see her show, I have a taste for you here. I chose the Friday the 13th Camp Crystal Cake Recipe episode in honor of summer and summer camps.

Now, let’s all get to know the girl who put the cleaver into June Cleaver!

Los Angeles Zombie Girl: Hi Kaci. I am so intrigued by your amazing show, The Homicidal Homemaker. Can you tell me a little bit about yourself?

Kaci Hansen: “My name is Kaci Hansen, and I am better known as The Homicidal Homemaker, where home economics meets horror. I officially launched my website in February of 2012 in honor of Women in Horror Month, and basically I just make grotesque looking foods that fortunately people get a really big kick out of. So, earlier this year, we officially launched the Homicidal Homemaker Cooking Show. Before that, I founded Central Valley Horror Club around 2008 and began hosting free horror movie nights, in hopes of uniting other local horror devotees. I still host the monthly movie nights to this day, and they’ve had a regular following and continue to grow. I even expanded into nearby larger cities. I also went on to host the first-ever zombie-themed event in Central California, the Visalia Zombie Ball & Crawl, which is now an annual event.” 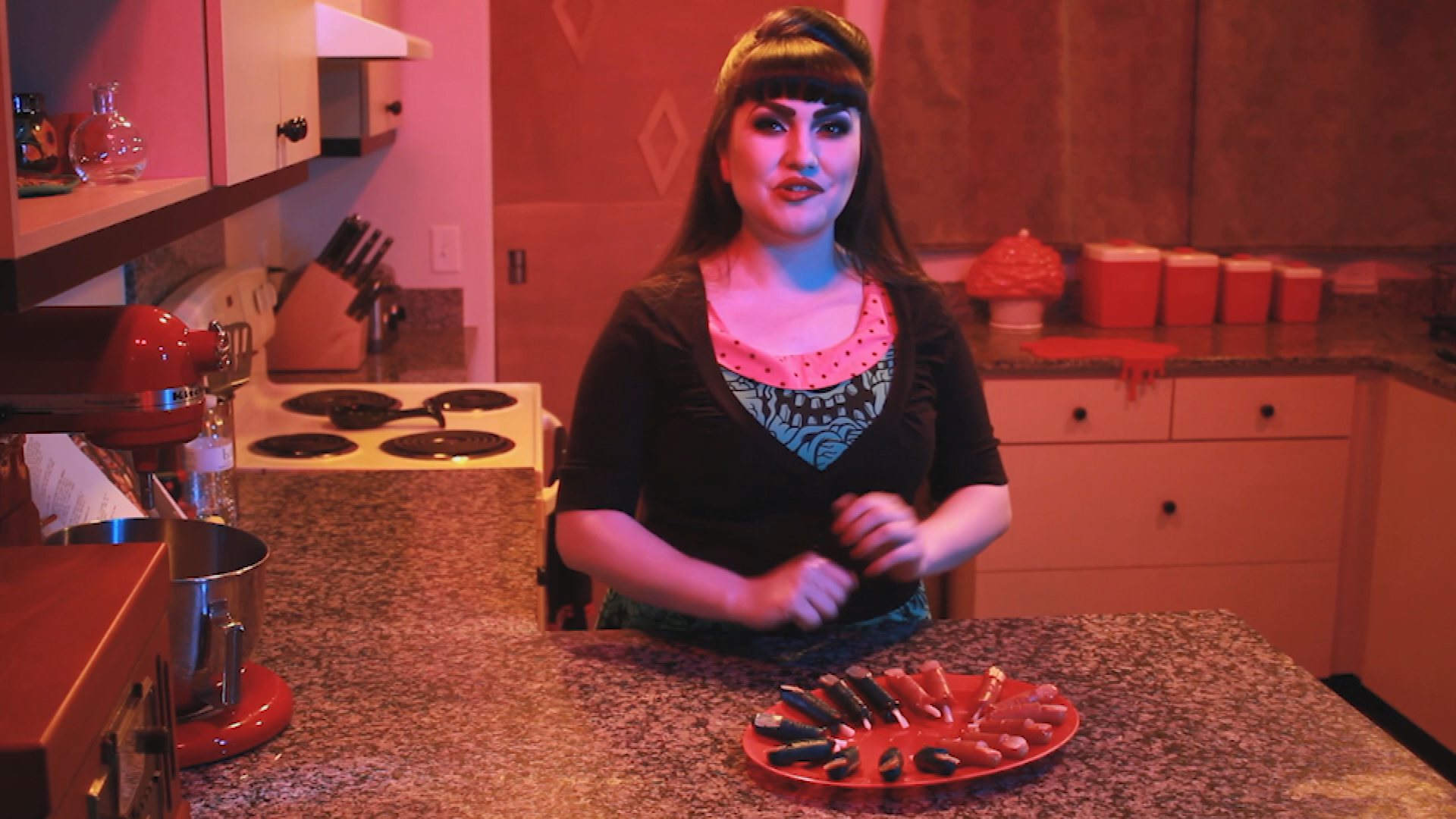 ZG: Have you always been a big fan of cooking?

KC: “I haven’t been cooking my entire life. I really got inspired when I was a teenager watching cooking shows to learn how to cook and I did always help my mom and my great grandmother in the kitchen. But when I got a little older, being a fine arts major, I wanted to find a way I could combine art with food (two of the things I love). It all started out taking a baking and decorating class at a craft store, and I started putting my own spooky spin on cakes. So then I wanted to see how I could take that same concept and apply it to other dishes that I made, and that’s kind of how the idea of the Homicidal Homemaker was born. I acquired a brain shaped gelatin mold, and I started posting pictures. Because I didn’t want it to look like Jello in a brain mold, I wanted to make it look like brain matter, people started saying ‘That looks disgusting, how did you do it?’ And I thought, well if there is an interest, maybe at least 10 people will follow me.” 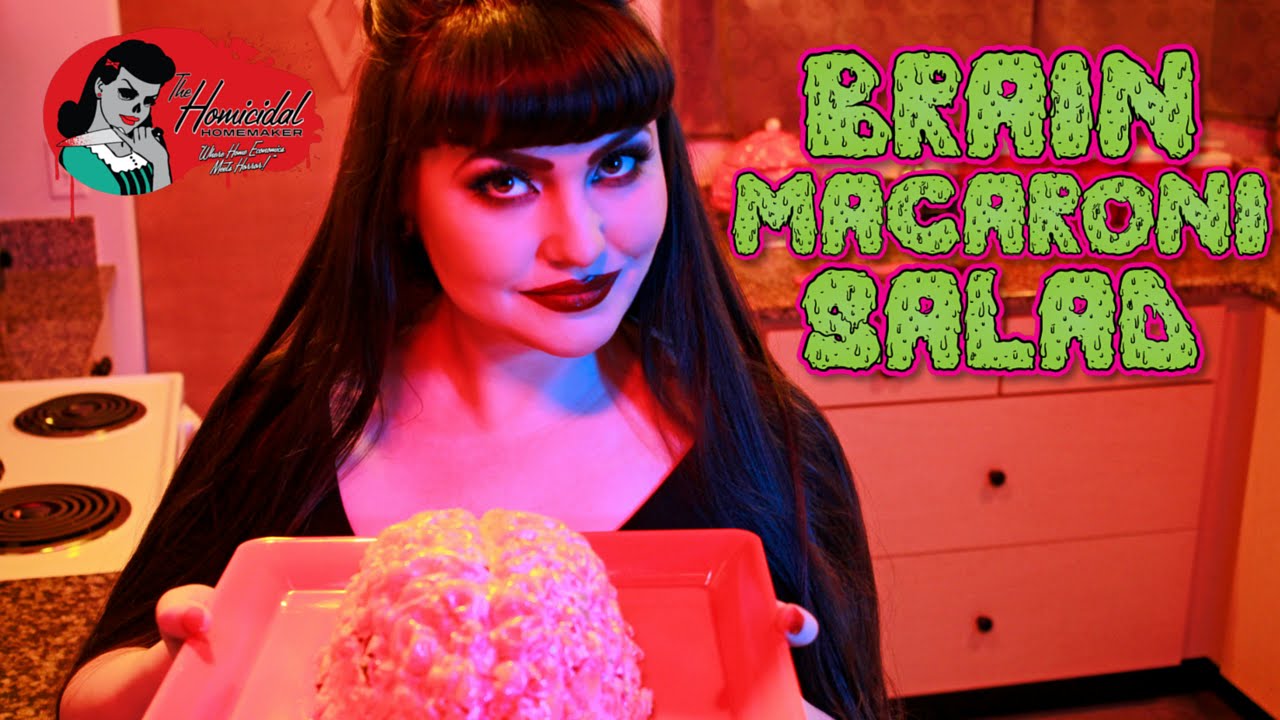 ZE: Did you even guess how popular you would be?

KH: “So here we are a few years later, I have close to 20,000 fans on Facebook and now we have a YouTube show! I can’t believe there is such an interest for it. Seeing the fans love it, well it warms my heart. I took every little element of my life that kind of makes me who I am and combined them. I’m really into 50s, 60s culture. I’m also really into 80s…I am a child of the 80s. I just kind of took everything that I liked and put it into my brand. When I had the idea pop into my head it was just kind of there, and I had to run with it. So I developed the logo myself, launched the website, did all my own web design. Prior to the show, 100% of everything I did was done by myself.”

ZG: So now you have a crew to work with?

KH: “It’s really great to have a crew that helps me get the show together. There’s so many things I would not be able to do without them. All of the content is 100% original, all the footage is original, all the music is done on a per episode basis for each show, we use our friends and local actors, and we’re filming in a real kitchen. But my little house on the show is a tiny model, and the little neighborhood is like Mister Rogers Neighborhood. Everything is built as a miniature model. Then I’m shot in front of a green screen, and they actually put me in the neighborhood. That’s beyond anything I could do. I’m the writer and the co-director, develop the recipes, handle the marketing and social media. But all the amazing stuff that you see on the show, well that’s my crew.” ZG: How do you decide what food to do for each episode?

KH: “It’s hard, because I get so many ideas. I get excited and I like… I want them all out there. A lot of times it will be because of the time of year. For Episode 1, we did Edible Entrails. The edible entrails go over very well. You don’t have to be skilled in the kitchen or very knowledgeable, and it’s pretty easy to put together. Even if you screw up, they’re intestines; they’re not supposed to look perfect, imperfections actually add to the look of the final dish. That was right before “The Walking Dead”’s mid-season premiere on Valentine’s Day, and I thought that would be a great treat for all the horror fans watching the show — or to snack on if they have Walking Dead parties. So for example, that’s why we had a Friday the 13th theme — to celebrate summer camp… or for you to have something themed to eat for a summer picnic.” 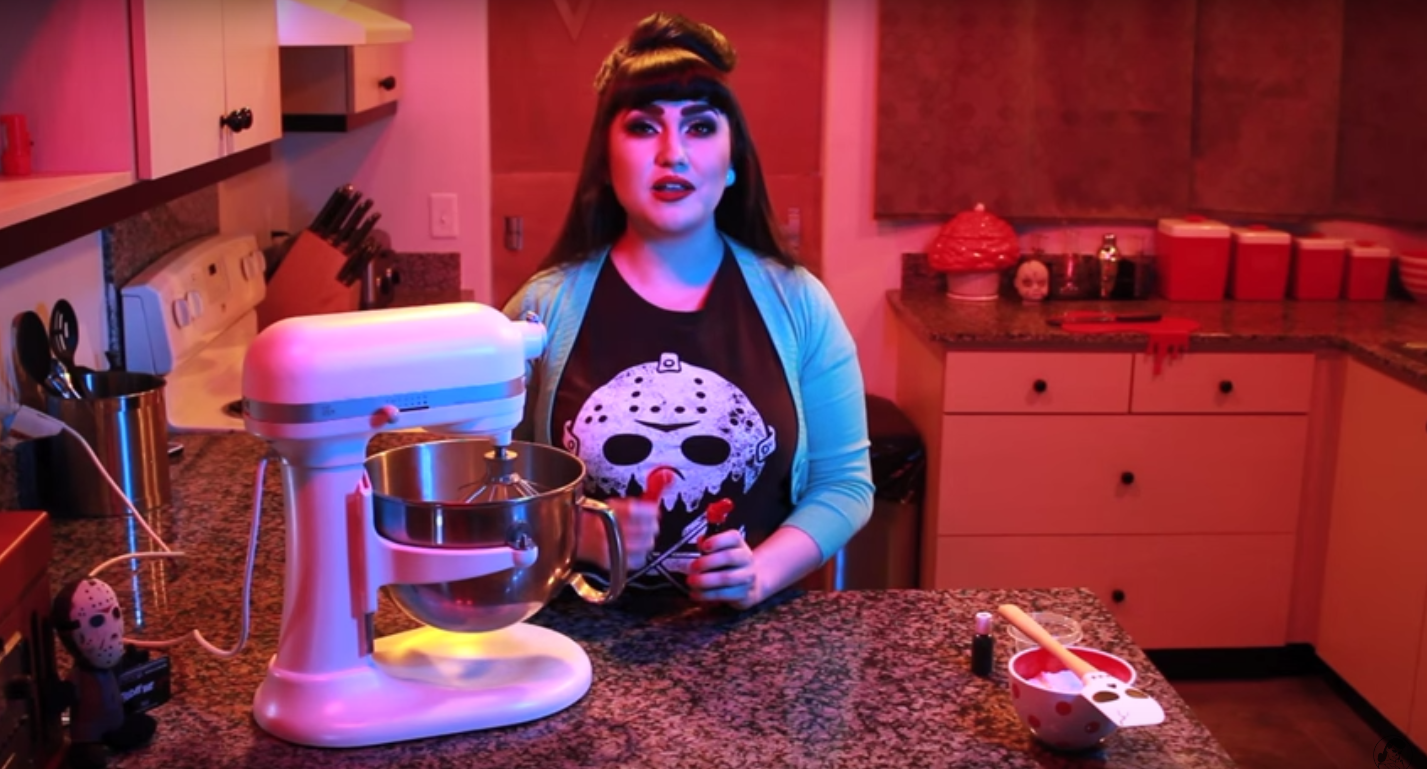 ZG: Your show is based on cooking horror themed foods. You must have a favorite horror movie!

KH: “It’s hard to pinpoint just one, because I could go on and on about every favorite movie and every sub-genre of horror. But one movie that I really like to recommend is Slumber Party Massacre 2. A lot of people will come up and they’ll say ‘Horror? I don’t like scary movies!’ And I’ll say, let me show you one that will make you laugh. It’s kind of like a gateway horror movie. I love it because it’s got a 50s vibe to it, but it’s an 80s horror movie, and I am a huge 80s horror fan. My favorite horror director is actually William Castle. I love everything about the marketing gimmicks that went into his movies (electrical jolts in chairs, hanging skeletons, ghost viewing glasses etc.). If I were a film maker, I would totally do something like that. The Tingler and Mr Sardonicus are favorites, demons and Italian horror like Tenebre… but, gosh, I could go on for hours. My favorite 80s movie is Night of the Creeps, basically anything that brings a smile to my face. Some people don’t relate with horror bringing smiling and happiness, but it really motivates me.” 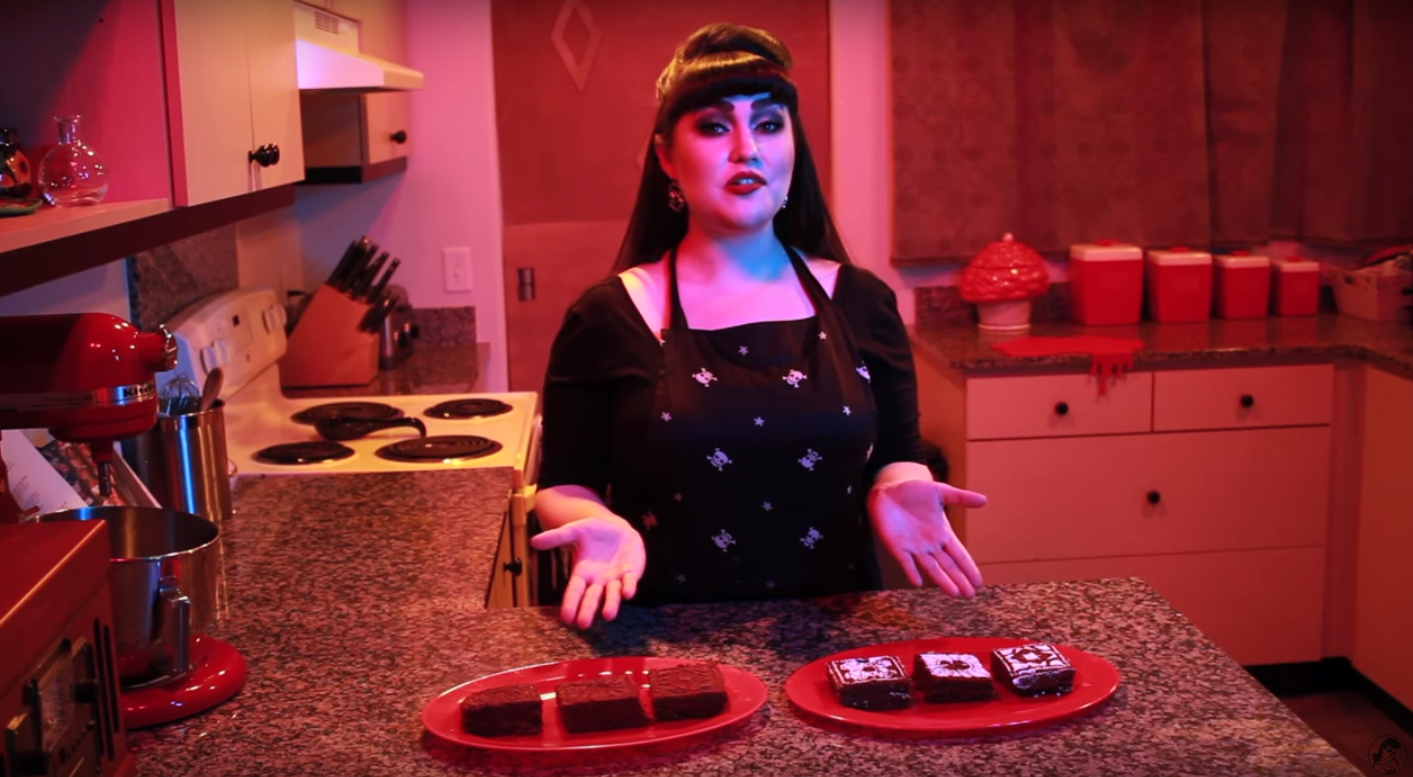 ZG: What can we expect to see next on The Homicidal Homemaker?

KH: “I can’t give away too much about upcoming episodes, but you can expect to see some cocktails and some very, very beloved horror movies that will have recipes named after them. We try to put a little mix of everything in there; our most recent episode is the DIY Pumpkin Syrup because we do want to include something for everybody. Not everyone is great in the kitchen, so we want to have things that inspire them and encourage them to get out there and get the ingredients — and see that it doesn’t have to be that hard. The pumpkin syrup episode actually got a lot of new fans that were not horror lovers to start watching the show. But horror fans. you can expect to see some much requested horror films on episodes soon!”