In order to celebrate Women in Horror Month, I’ve drafted a categorized list of horror films directed (and often written) by women that deserve your attention. These 28 films – one for each day in February –  have been sorted into four categories. This is part three of four. (Read the full intro here). 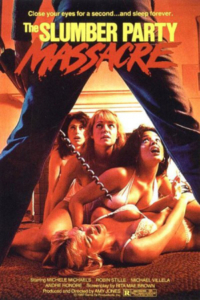 When the slasher film exploded in popularity in the early 80s, the market was flooded with a wave of imitators imitating other imitators imitating whatever lucky ones floated to the top. The only thing that really distinguished one film from another was the setting and whatever gimmicky weapon-of-choice was wielded by the killer. Then in 1982, The Slumber Party Massacre came along as the first explicitly feminist take on what was quickly becoming a genre accused of rampant misogyny. The story supposedly goes that author and feminist activist Rita Mae Brown wrote the script as a parody, but was played straight in production at the behest of its producers. Nevertheless, Amy Holden Jones’ direction keeps things scathingly satirical and over-the-top. It’s the story of a sleepover that gets attacked by an escaped convict carrying a power drill that’s as lethal as it is symbolically phallic. Very highly recommended. 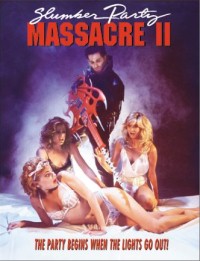 The driller killer returns! A survivor of the original (Crystal Bernard) goes to a condo with some friends for a weekend of music and makin’ love. However, she’s plagued by nightmares where her sister begs her to stay chaste. These nightmares produce some kind of metaphysical murderer  that targets the teenagers, and the weekend becomes a weird, rock ‘n’ roll fight for survival. The killer’s weapon of choice is an electric guitar with a drill on its head, and if that alone doesn’t sell you on this flick, I don’t know what else will. 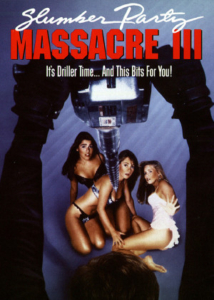 This is the final film in the woman-made Slumber Party Massacre trilogy, and it’s rife with overblown Valley Girl lingo and sunny beach vibes. That’s right, it’s the 90s! The drilling and killing continues, and there’s a surplus of low-budget cheese, but unfortunately, this film is the least innovative and the most problematic of the three. Its attitudes towards homosexuality are less-than-comforting and it lacks the deconstructionist airs of its predecessors. It’s disappointingly unambitious, but it would be remiss of me to not include the full trilogy on this list, so strong-willed fans of campy slashers might still be intrigued. 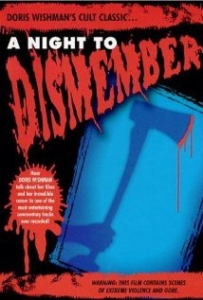 A Night to Dismember was directed by Doris Wishman when she was 71 years old, and it’s worth sharing that she reportedly once said, “After I die, I will be making movies in hell!” and I think that’s just incredible. The whole reason Wishman got into filmmaking in the first place was because in 1957, a New York Appeals court ruled that films containing nudity were legal to exhibit in the state. She started making sexsploitation and other nudie films immediately after the ruling at age 45 and gradually became the most active woman filmmaker (not just in the underground, but period) during the 60s and 70s – so remember, it’s never too late to follow your dreams! When Halloween came out in 1979, Wishman was inspired once again, this time to cash in on the slasher craze. The result is A Night to Dismember, which depicts a particularly gory night in a sleepy Midwest town as recounted by a police detective’s voiceover, but “depict” is a strong word. A Night to Dismember was plagued by a nightmarish production – wherein one disgruntled employee just destroyed half the footage partway through – and the result is a slipshod train wreck. It looks like a slasher movie that someone broke into a thousand pieces and tried to put back together with scotch tape, but that’s the reason why it and Wishman are so well-loved.