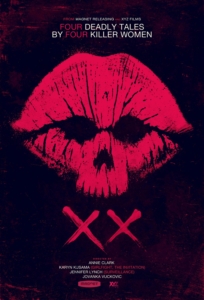 It’s very early in the morning, and despite getting off of work relatively late last night, I made sure to awake at this time to finally experience the female driven Horror anthology, XX which is available now in select theaters as well as iTunes and Amazon VOD.  A few years have passed since I first learned of this endeavor, involving all female writers and directors, to create a new anthology of Horror.

The project was brought to fruition by my beloved Magnet and XYZ Films, alongside Snowfort Pictures and SoapBox Films who also helped in production. Although some of the talent originally attached to project was changed (Mary Harron, Jennifer Lynch, and The Soska Sisters were some names), it did not seem to deter fans’ interest in the anticipated thriller.

XX still fit the bill, it seemed, as a ‘Dream Team’ of ladies behind the lens, supported by an unprecedented number of female film crew members on the sets for each installment of the movie. 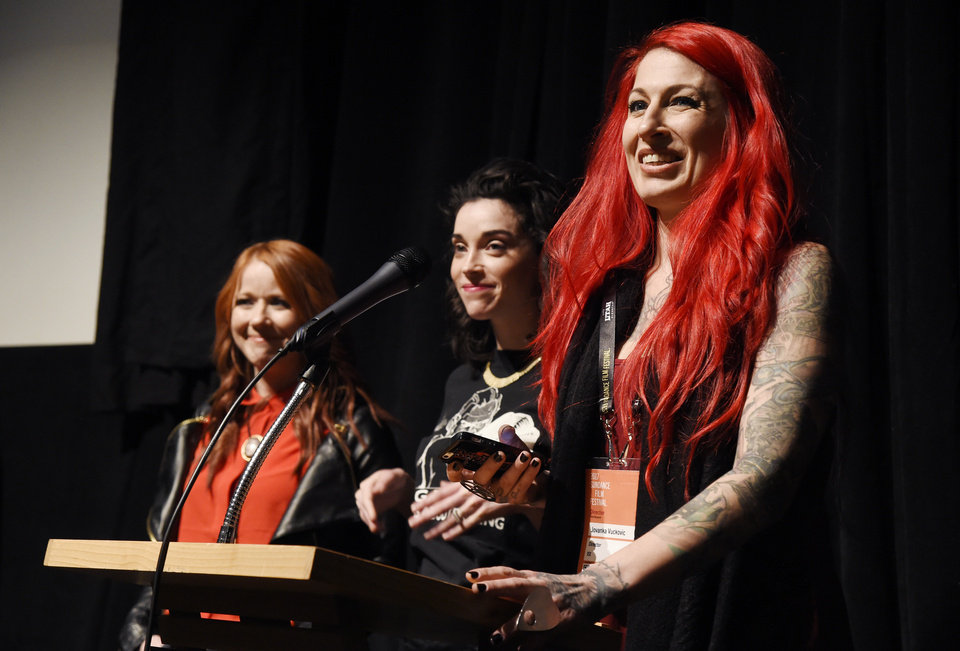 Since it’s premiere at this year’s Sundance Film Festival, XX has found homes on numerous ‘Must See’ lists and hailed by not only Horror critics, but mainstream media members too.  It made this fan breathe a sigh of relief and appreciation. Finally, on such a massive platform, these talented ladies had a chance to show their wares and have their voice heard. It appeared to have gone very well.

Associate Producer and filmmaker Jovanka Vuckovic was known to say that females need to have more opportunities  in the industry, that women need to provide to each other those very opportunities whenever possible. Having XX as a soap box of sorts, to shout this message from, is as perfect as it can get to convey this heartfelt call to arms, in my opinion.

The Four Deadly Tales by Four Killer Women known as XX opens with Vuckovic’s (The Captured Bird, The Guest, and author of “Zombies! An Illustrated History of the Undead”) piece, entitled “The Box”.  The former Editor in Chief of Rue Morgue Magazine wrote and directed this adaptation of a Stoker Award-winning Jack Ketchum short, of the same name.

It begins with the voice over of a mother on the subway with her two children, Danny and Jenny.  She speaks of difficulties keeping her two kiddos behaved and focused during the excitement of the Holidays. Her youngest, Danny, gives in to his curiosity and asks a stranger sitting next to him what is inside his gift box. The stranger obliges Danny, even after the mother expresses a dislike of her son’s bluntness. The boy peeks in, becoming clearly disturbed as his smile disappears. What unfolds after his subway ride home that Sunday afternoon is the beginning of a hunger strike. Multiple fantastic feasts are skipped by the usually hungry growing boy. 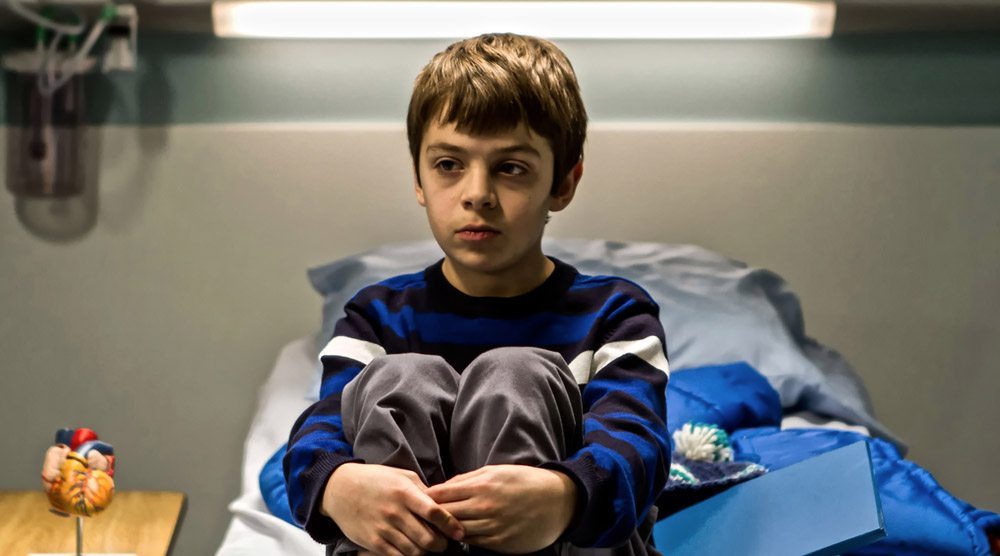 Three days go by and the concern from his parents intensify as his older sister Jenny continues to chow down normally while reading a “Hellboy” comic (an awesome nod to Guillermo del Toro who Executive Produced Jovanka’s Award Winning short The Captured Bird).  A Doctor visit is scheduled, but nothing physically wrong appears to the medical professional. However, an alarming conversation between the Doctor and Danny ensue. Danny states, “Everything is fine, I’m just not hungry is all.”  The Doctor replies, “Well, if you don’t eat Danny, you’ll die.” Very abruptly the young boy answers, “So?”

As his refusal to eat continues, Danny decides to share the dark discovery of what was inside the box to Jenny, and by Friday she is no longer eating either. In a desperate attempt to reach out to his son, the father sits with the boy in his room. Danny ominously leans close to his father and whispers something in his ear. The look upon his father’s face now echoes Danny’s on that fateful train ride home days prior.  With her entire family afflicted with some unknown and unseen reason to never eat, the mother’s days are spent tirelessly searching for the man who possessed the gift box to learn what was inside of it; to become whole again with her family.

“The Box” was highly unsettling to say the least, providing a taught psychological complexity and uneasiness to open XX with. 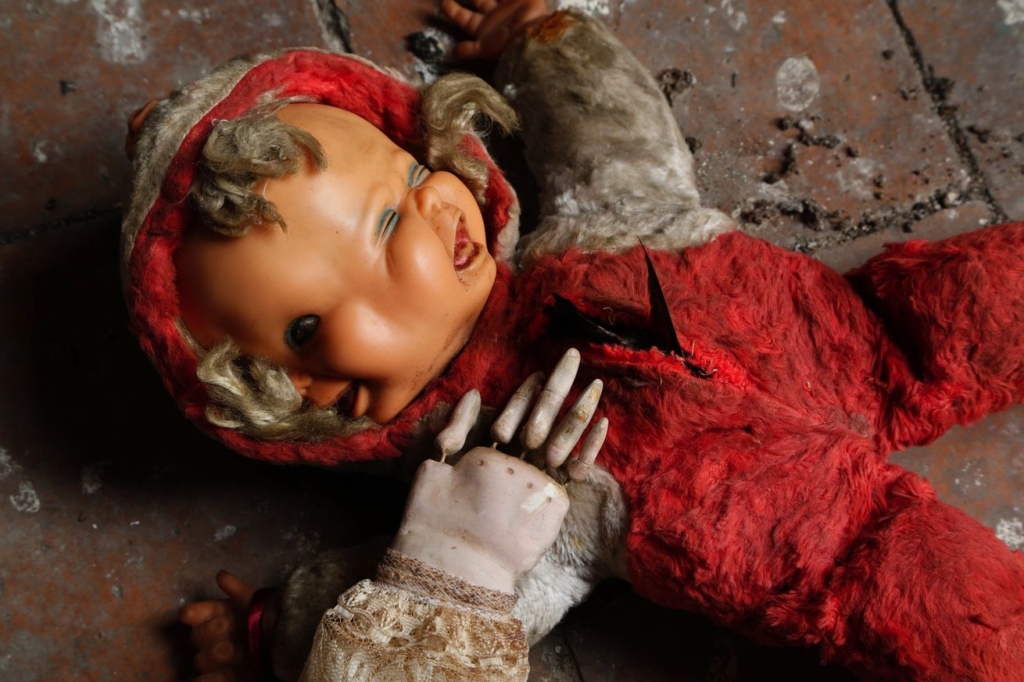 Complimenting the astounding collection of stories featured in XX is the dark and inventive stop motion sequences, peppered with surreal photography, which serve as enjoyable intermissions between each segment. Sofia Carrillo did a brilliant job weaving in and out of each short with her own horror inspired creative stamp. Her contribution to the anthology really is remarkable, I must admit.  You have to see it to appreciate it.

Shifting gears a wee bit for the next segment, co-written by Roxanne Benjamin (Southbound) and Annie Clark, “The Bir