You’ve Got Read on You: Felix I.D. Dimaro

We talk to indie author Felix I.D. Dimaro about his very personal and powerful stories which prove that man is truly the scariest monster.

The room is cold and small. Darkness swaths the area with its many shadows, but we feel a presence with us in here. We sense someone at its center waiting…

A stage light blasts on, revealing to us the first Author Spotlight of the year. Welcome once again dear reader, as we introduce to you horror author Felix I. D. Dimaro, whose book Bug Spray was reviewed by us last year. Recently, he has released the novel Viral Lives, and was gracious enough to take time and talk to us about his work.

As taken from his bio, Dimaro was born in Nigeria, the youngest of five children. He moved to Canada when he was four and was raised in Toronto, Ontario, in neighborhoods that were considered to be “at risk”. In those neighbourhoods, Dimaro learned hard lessons at a young age, about things like discrimination, desperation and death, but also about strength, survival and passion.

A graduate of the University of Toronto with a BA in Psychology, his upbringing and interest in the human mind both factor into the stories that Dimaro writes. Stories that usually center around human monsters, theology, and issues of morality. 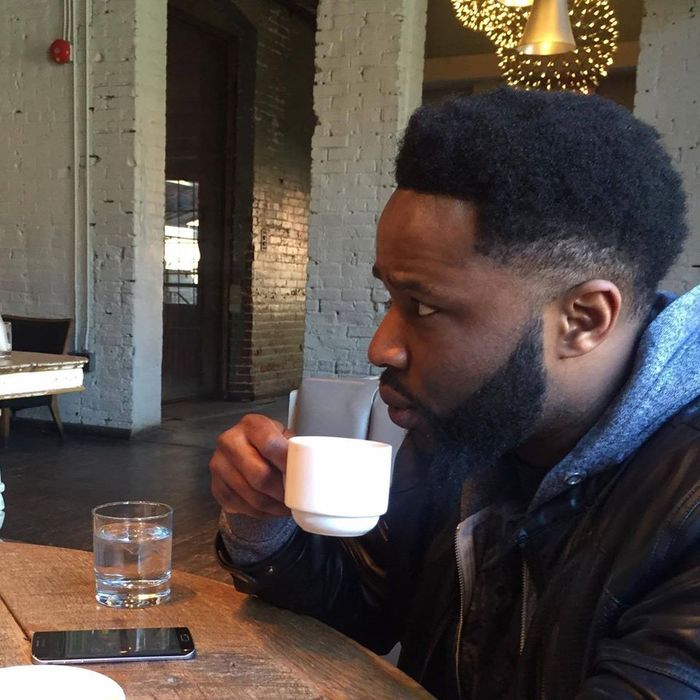 Morbidly Beautiful:  With three books out now (How to Make a Monster (Loveliest Shade of Red), Bug Spray, and the most recent release, Viral Lives), how has the road been for you so far?

Felix Dimaro: It has been interesting, and not really what I expected exactly, but the abundance of kind and complimentary words I have received about my work so far has been, at times, staggering. It has been a struggle for sure, and I’m still learning and am still far from where I need to be, but the amount of encouragement I’ve received has really motivated me during this process.

MB: What has been the process for you? How do you go about finding the story to write, and/or even choosing which ones to get done?

Dimaro: It’s different for each story, really. Most of my stories are inspired by something I’ve gone through, or some issue I’ve contemplated (whether personal or societal) that I want to explore, and hopefully, get people to contemplate as well. Bug Spray was an example of that.

I had been going through difficult times, and it really exposed to me how hypocritical people often are when talking about mental health. So I focused on that and made sure to get it out there during a time when I feel that people really need to be exploring mental health, and not just the platitudes that many have become accustomed to saying because those are the polite/politically correct things to say.

Also, I have an overarching universe that I am writing about, and some books have to be created and released in an order that fits the larger story I’m trying to tell. 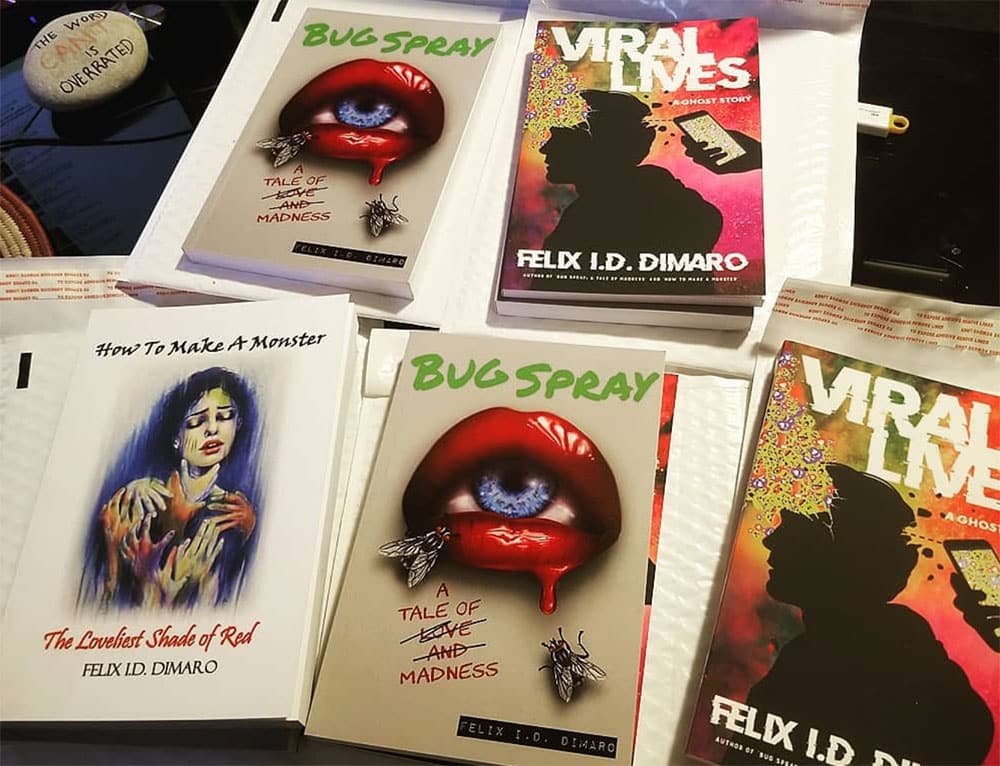 MB: Not to gloss over everything else, we will return to that I swear, but I’m curious. In regard to your overarching universe: does that mean you’ve more in the pipeline that’s just waiting for the right moment to be released? Or to be written?

Dimaro: I have more down the pipeline waiting to be released, and I’m giving myself the time to work them properly. I am currently in the editing process of a novel and a novella, and I have two novels completed that are still drafts. And two or three others that need to be at least partially rewritten, and several other partially completed projects. So, there’s always something to pick to work on.

MB: Sounds like you have your hands full! As promised, returning to what you said about touching on things you have experienced and want to bring light to.

I noticed you have a way of making these stories dark, possibly nihilistic (please feel free to correct me if I’m wrong), and just all-around gritty tales. Did what you are writing about affect how you wrote them? Or was that always the intended idea. 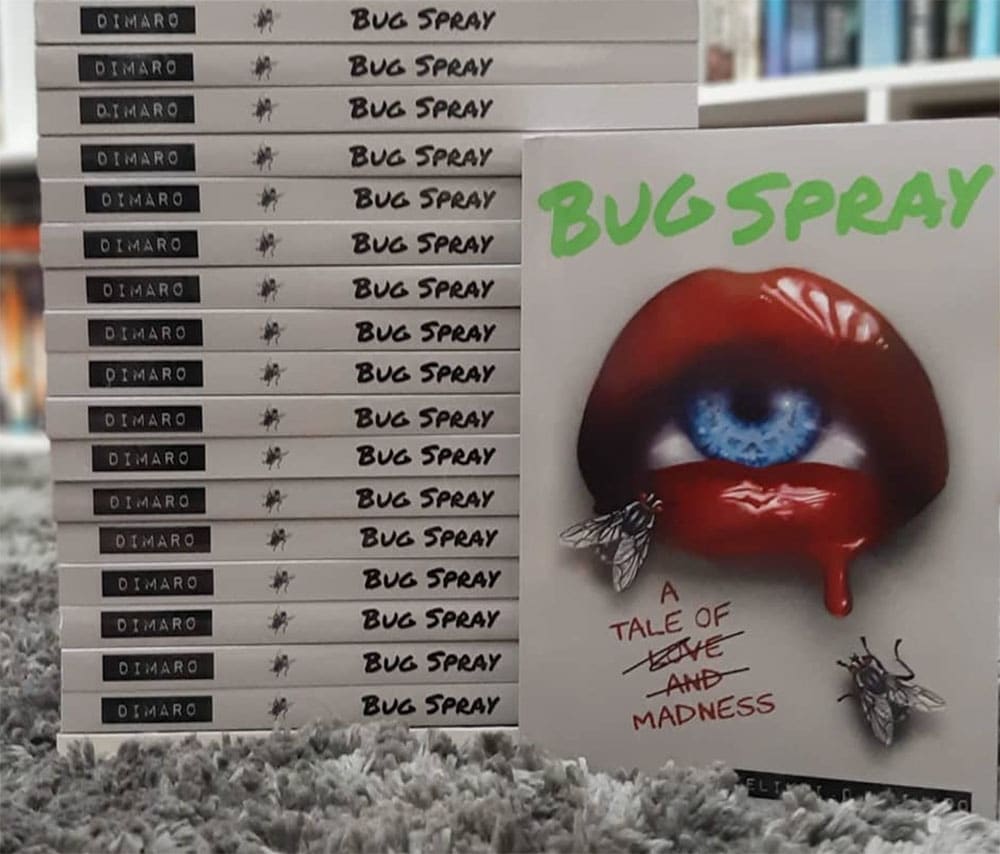 Dimaro: Yeah. It’s cool to have a lot of projects, but it takes away from the side stuff like social media and a potential website and such. And I am not good with balancing my priorities, haha!.

As for my stories being nihilistic, it is interesting that you use that term because I am kind of going for the opposite. And that will become more clear with other projects down the road. Things for my characters usually go poorly, but I like to think that the majority of them come to a crossroads where they have a chance to make their lives (or afterlives) better. What I’m mostly writing about is the choices most of us choose to take and how they impact ourselves and the people around us, some of whom we may not necessarily know.

I did not start out with any real intent when I was writing HOW TO MAKE A MONSTER, those stories were mostly from dark portions of my life, written at a time I simply felt writing them. - Author Felix I.D. Dimaro #interview Click To Tweet

Then, when I put them together, I realized how messed up they were, and wondered if I should bother publishing them at all. Then decided that what I was writing was my honesty and figured other people might appreciate it. So far it has seemed that way. But I still get nervous when people tell me they’re going to read some of my stories (mainly the ones from How To Make A Monster). 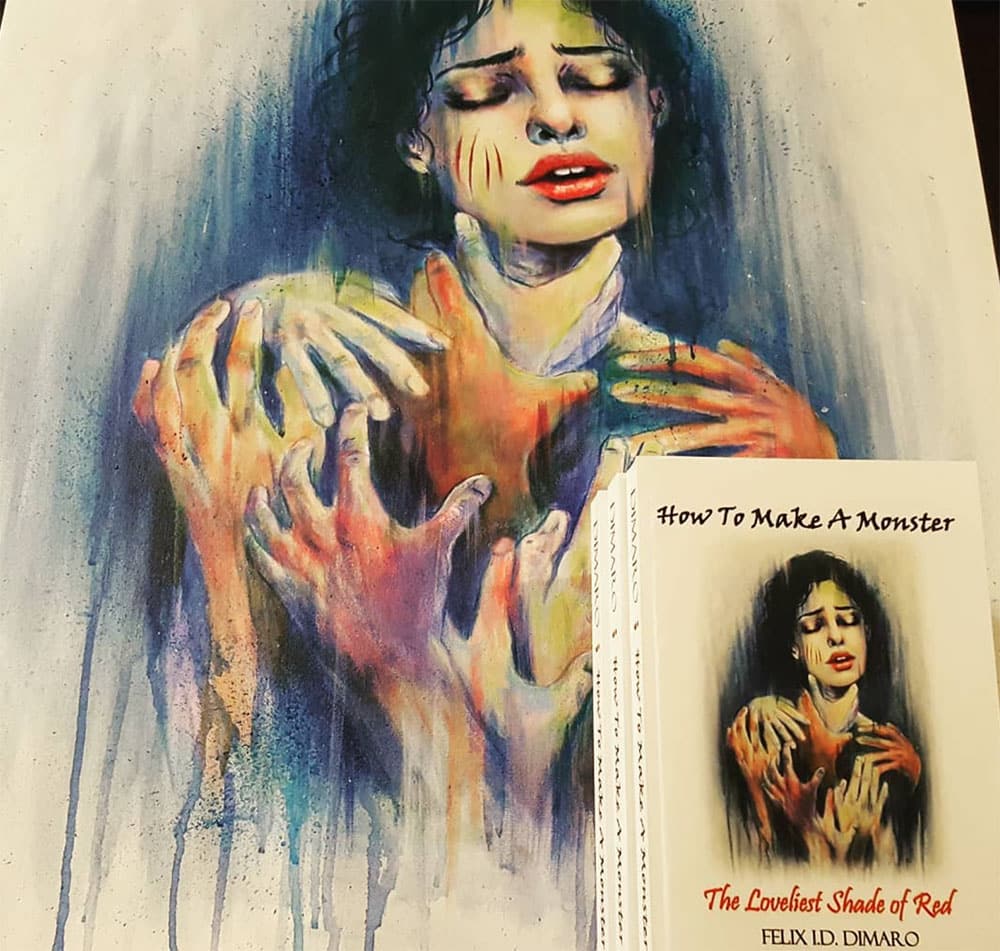 Dimaro: I think the majority of what I write about will explore dark themes. Some stories may not be as gritty as those in HTMAM, but some may be more so, it depends on what the subject is and the point I’m trying to get across. Not all stories need to be super violent or explicit. Sometimes, when it’s not from an honest place, that sort of stuff can cheapen an otherwise good story, and I don’t want to be accused of that.

Horror is where my heart is that the end of the day. With my reading I gravitate to horror first but always make sure I branch out to other genres. That’s how it will be with my writing. My next release 2222 involves time travel and takes place 200 years in the future. While it has dark themes and some horror elements, it will have to be defined as a sci-fi/thriller. And I’m fine with that. What I do worry about is people who like horror being put off by releases that may technically fall under a different category. 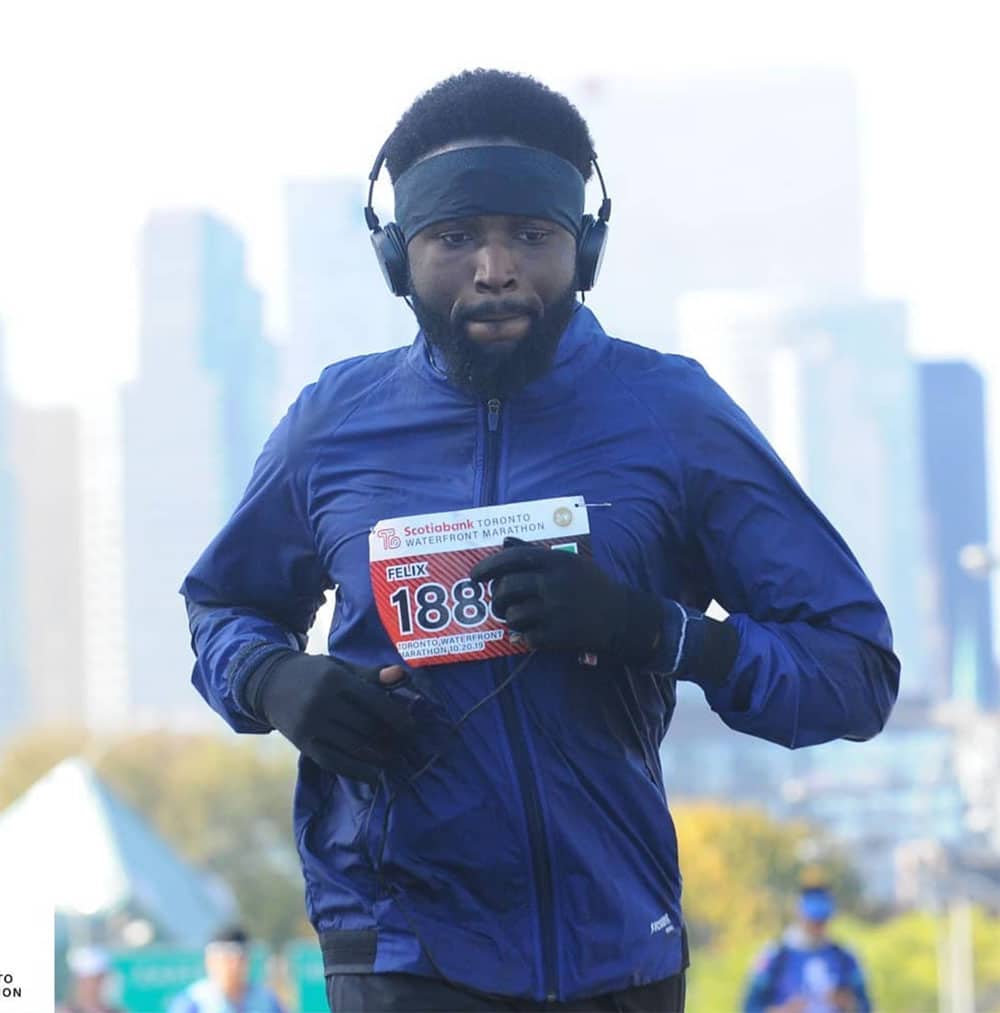 MB: Personally, and of course this is just my humble opinion, I think a diverse set of writing does a lot to showcase a writer’s talent, especially when jumping genres. Speaking of your heart being in horror, where did that love start? And obviously it’s had an influence in your writing, but how exactly have you seen it affect what you do?

Dimaro: It started with me being the youngest of four brothers and having no control of the remote control. So I was watching stuff my brother, who was ten years my senior, watched. And he happened to enjoy horror. It’s sort of always been there. I read all kinds of books when I was a kid, from The Babysitter’s Club, to Encyclopedia Brown, but almost nothing hooked me like Goosebumps and then Christopher Pike’s work, and then eventually Stephen King. There’s just something about horror that seems honest, that dives deeper into the things other genres don’t usually talk about. I think it boils down to the fact that horrific things captivate people. I’m still trying to figure out why that is.

It’s hard to say if I would be writing, or what I would be writing about if I hadn’t had the influences I had growing up. But reading/watching dark themes and knowing I could talk about stuff like that definitely motivated me to want to write what I write now. I like to think that the most influential writers to me have been the ones that have sort of given me permission to be as honest as possible with what I put out there. 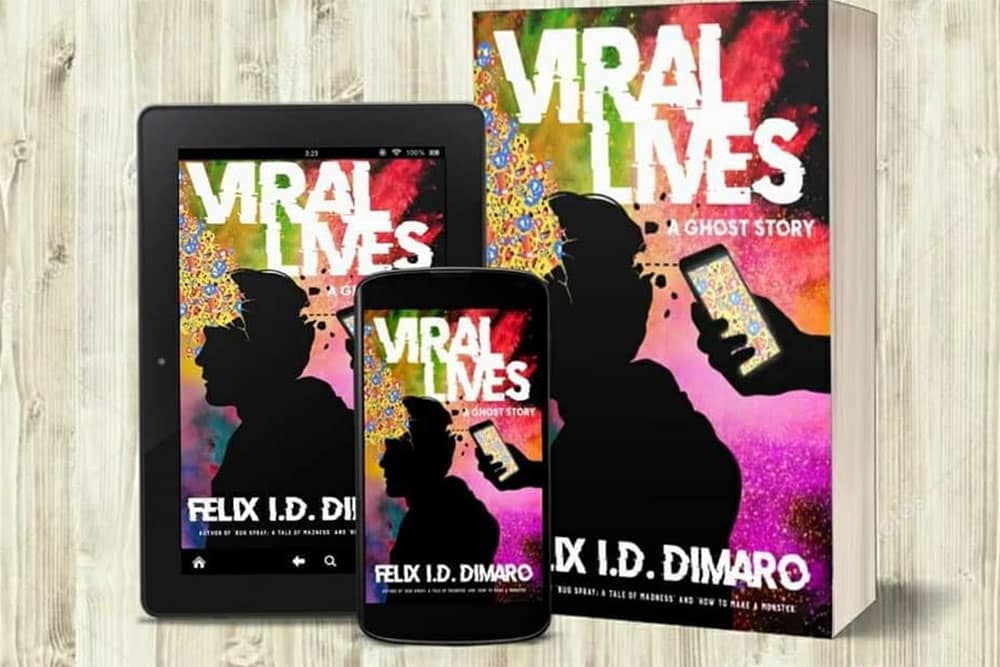 MB: I like that. That’s a really interesting way to look at it, and to see how it’s affected you. Before I go ahead and let you get back to work, let me ask you this: if you had to choose which book or author left the biggest impression on you, who would you say that was?

Dimaro: A book that was majorly influential would have be Influential Monsters by Chuck Palahniuk. I only read it a few years ago. Around the time I was putting together HTMAM and feeling uncertain about how dark my stories were, and how my writing style is a bit different than most. I didn’t think people would accept what I was writing. But just reading how raw and honest and outright weird the story was, it sort of let me know that there is an audience for just about anything. And if you are honest and relatable, then people will appreciate what you put out there. That’s what I mean about writers/books “giving permission”. That book sort of told me that I could be who I am and write what I want.

MB: That’s definitely being added to my reading list! Thank you for taking time out of your day to do this, I truly appreciate this. Can you let the readers know where we can find you and your books?

Dimaro: Thank you very much for the interview. You can find me on Instagram @Thingsthatkeepmeupatnight or on Facebook or on Slasher @Dimaro, and all my books are available on Amazon.

And with that, we turn off the spotlight. We lock the door behind us, as we leave Felix Dimaro to write and write and write, forevermore. Be sure to read his books How To Make A Monster (The Loveliest Shade of Red), Bug Spray, A Tale of Madness, Viral Lives: A Ghost Story, and be on the lookout for further information on his upcoming book 2222.