The Babadook as Gay Icon: Revisiting an Old Meme

In these tumultuous times of 2020, let us harken back to three years ago and remember when Netflix accidentally created an icon for the ages.

The Babadook is a 2014 release by Australian Director Jennifer Kent. The film follows the story of widow Amelia Vanek (Essie Davis), who is trying to keep her volatile young son Sam (Noah Wiseman) in check while grieving for her late husband, Oskar (Benjamin Winspear). As Amelia struggles with the world falling down on her, a mysterious, looming entity called The Babadook keeps threatening to undo their waning family unit.

The titular Mister Babadook ends up possessing Amelia, and nearly forces her to kill her own son, before they defeat him and lock the Babadook in the basement.

For all intents and purposes, the Babadook was meant to be the symbolic culmination of Amelia’s stress, depression and anger, all leading her to make an attempt on her son’s life, and her own life.

And then, in 2017, to the shock and confusion of anyone who wasn’t gay, Mister Babadook was turned into an LGBT idol. 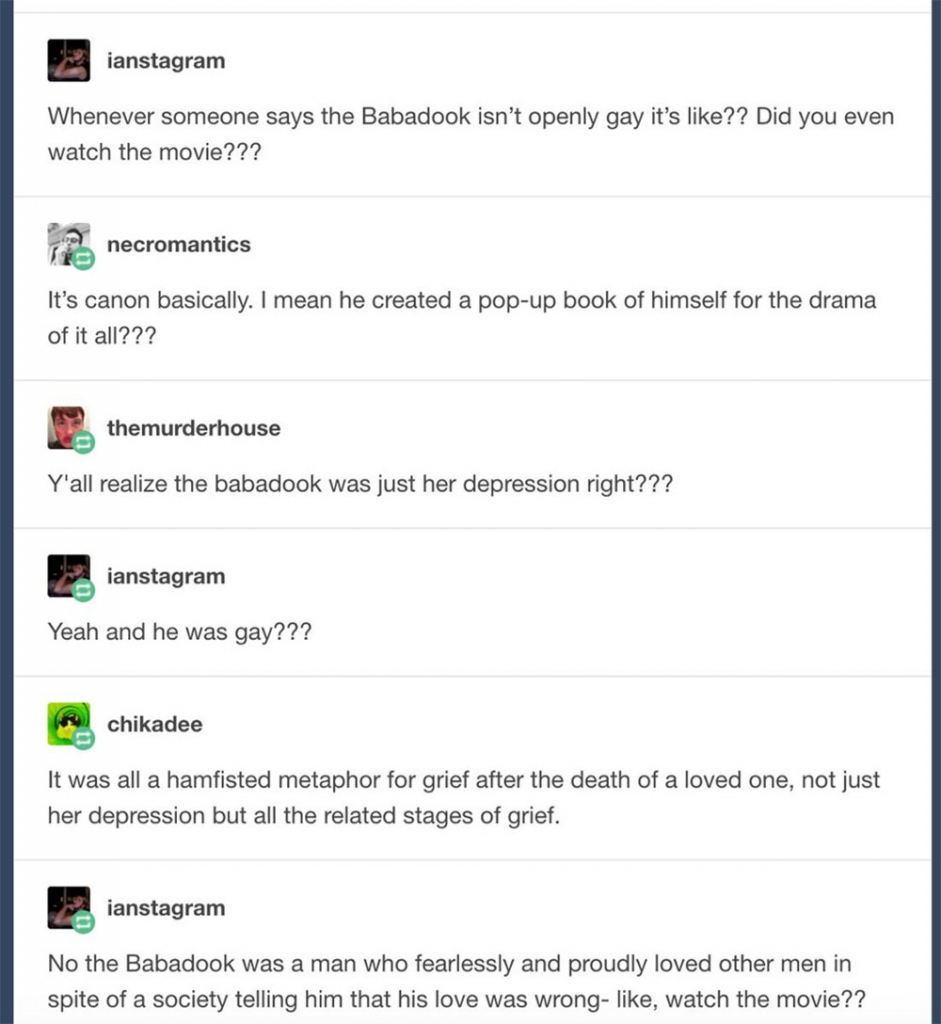 The post (that may or may not be photoshopped, nobody’s quite sure) that went viral on Tumblr featured Netflix’s section of LGBT movies; wedged in between G.B.F. (Gay Best Friend) and Molly Shannon’s 2016 film Other People, is none other than the icon himself, and the film’s namesake, The Babadook.

The image itself originated from an earlier Babadook discourse chain on Tumblr started by user ianstagram, in which they proclaimed that the tale of the entity haunting a typical suburban family featured an “openly gay” Mister Babadook.

Outraged movie fans didn’t quite catch on, and the joke spawned into a meme, which in turn spawned into an accidental icon for the modern era.

And the internet just rolled with it. 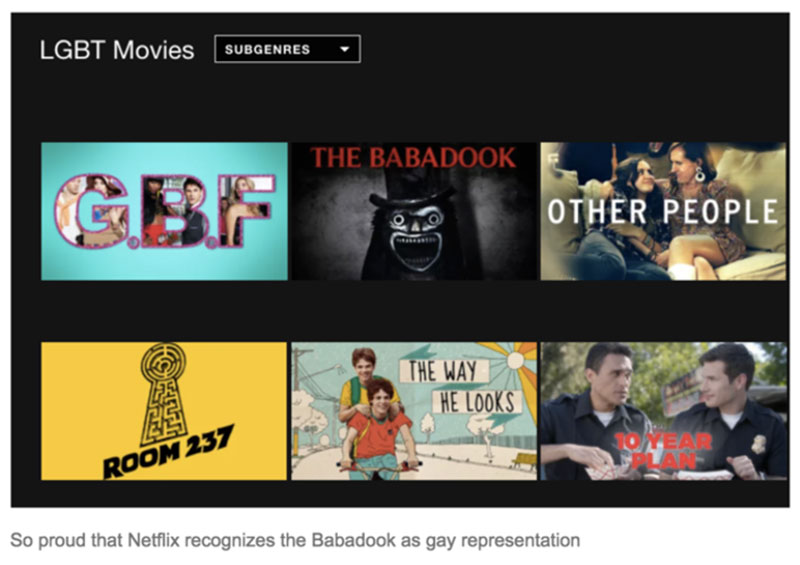 From Know Your Meme: https://knowyourmeme.com/memes/subcultures/the-babadook

(Sidenote: There’s probably something to be said about why Netflix thought “Room 237”, a documentary about the making of Stanley Kubrick’s “The Shining”, also needed to be included in that category.)

And thus, a movie that was already three-years-old was brought back from the dead, as Mister Babadook popped up in pride celebrations across the country in June of 2017; one of the most iconic images of that era being Miles Jai, gay influencer and actor, dressing up as the Babadook to the season nine finale of RuPaul’s Drag Race.

The YouTube video, in which he shows us all how to get that babalewk, is still up at his channel, @MilesJaiProductions. 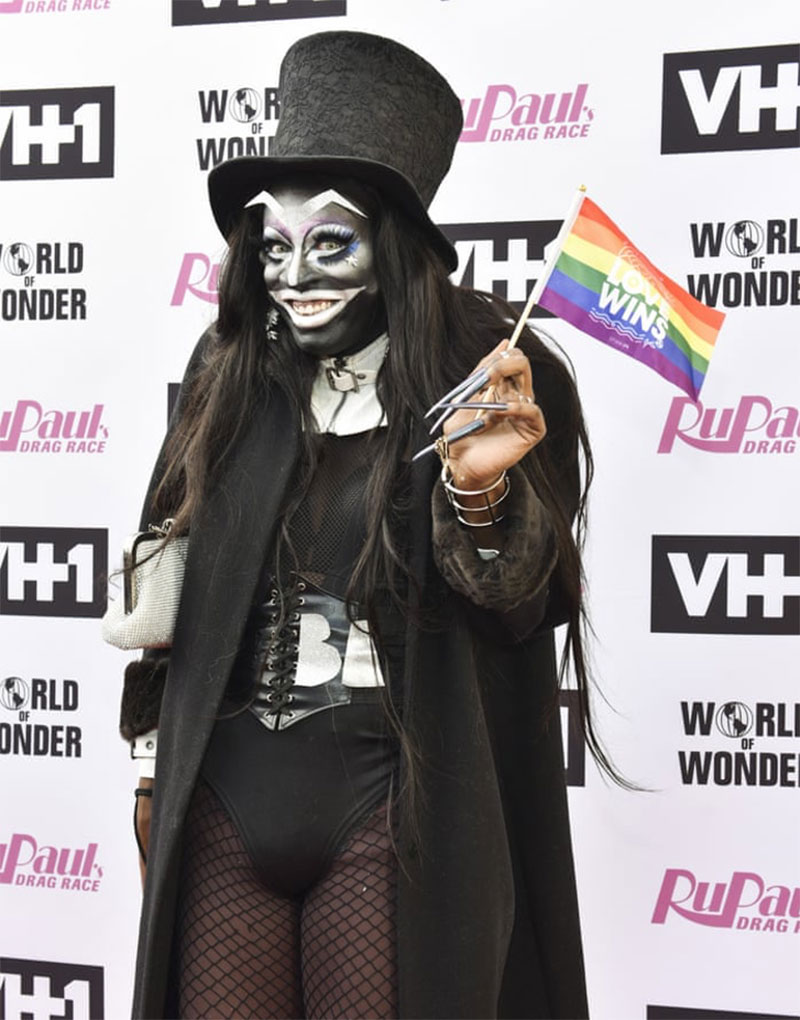 As the Babadook catapulted from horror icon to queer icon, a thousand think pieces relating the experience of many LGBT folks to the family’s fear of the Babadook monster popped up from news sites like The Guardian to Rolling Stone.

The Babadook as queerness itself threatens to undo the fragile, standard family unit.

Instead of embracing her monster, Amelia tries to banish it or suppress it, only for the Babadook to come back stronger. People have noted the parallels to how straight, cisgender society has tried to quash queer movements, or LGBT people themselves.

The Babadook became the symbol he is for marginalized communities because, for those who us who aren’t straight, it is often necessary to conceal parts of ourselves so as not to upset the social order of things. We are forced back in the closet (in the Babadook’s case, the basement), by a family, or a society, that wants to be “normal”.

The Babadook, and iconic movie monsters like him, appeal to those who exist outside of the margins of what society deems normal, because anything or anybody that exists in these margins is seen as monstrous.

Rolling Stone sums it up beautifully in one sentence:

“Horror drives on unnerving the viewer by preying on the inherent fear of the unknown, and homosexuality—really, anything or anyone that defies typical gender norms— has been historically misunderstood and maligned as a boogeyman.”

Director Jennifer Kent finally acknowledged the then two-year-old meme in 2019.

The Babadook’s distributors, IFC midnight and Shout Factory, went the cheeky route and made a limited-edition DVD of the film with none other than the gay icon himself, silhouetted in front of a rainbow background. Not to tempt anyone, but the DVD is still available on shoutfactory.com for twenty dollars. 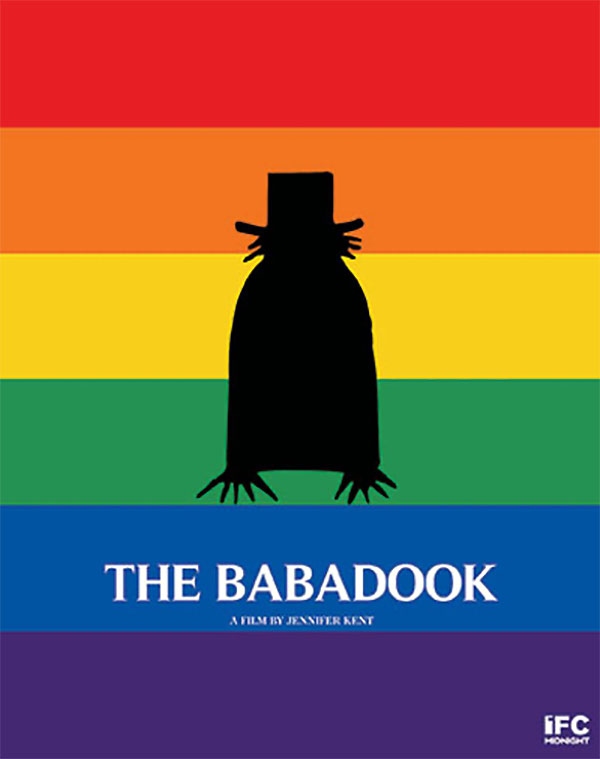 As we celebrate this year’s Pride Month, always remember: pride started as a disruption.

Being proud of who you are sometimes means having to dismantle, or shake up the systems that have held you down or suppressed you for all this time. Take a page out of The Babadook’s playbook, and live loudly and freely. Don’t let anybody lock you in a basement, metaphorically speaking.