You Oughta Know: The Beauties and the Beast

An American Vidiot Presents: “They Call Him Bigfoot.” 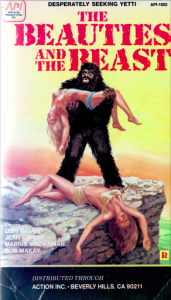 Sexploitation was a pretty popular subgenre in the early to late 70s, and it coexisted quite well within the horror genre. If directors couldn’t afford high quality special effects for their genre films, they could just throw in a ton of graphic nudity and gratuitous sex and still appeal to an audience. However, while that was often enough to get people to watch, it didn’t often translate to a good or even entertaining film. The Beauties and the Beast was one such film that was pure sexploitation packaged as a horror film. So how does it stack up in the world of gore and sleaze?

The movie starts out with a reporter telling us the history behind Bigfoot and that the movie we are about to watch could be true, which sets up how ridiculous the movie we’re about to watch is going to be. We are then introduced to Bigfoot and his vixens (the original title of this movie was The Beast and the Vixens). Some time after Bigfoot kidnaps a woman, we see our heroine Mary (played by Uschi Digard) and her girlfriend Ann (Jacqueline Giroux) head out to a cabin in the woods. After that, Bigfoot rudely interrupts a couple having sex in the woods. The “brave” gentlemen runs away, leaving his girl behind to get snatched up by the beast. While Bigfoot runs off to have his fun with the girl, we abruptly change scenes and the focus of the story shifts to the two college girls, Mary and Ann, as they meet a group of nudists in the woods and decide to all party together in a cabin. The film, by the way, never revisits the plight of the kidnapped girls.

The lead male among the nudists proceeds to sing a terrible, headache-inducing song. For some unknown reason, Ann is quite taken with the singing. Soon after, the girlfriend of the “head nudist” has a nightmare of her and Uschi having a Quick and the Dead style gunfight, and we get a surreal dream sequence with the two girls walking from a long distance until they are about a foot apart from each other. Of course, they are wearing nothing but cowboy hats, boots, and a strap around their waists to hold their guns.

After that we have the longest sex scene I have ever seen with the main nudist and his girlfriend. Then, out of nowhere, some criminals break into the cabin and demand the nudists give them the gold coins they apparently got from a hermit who lives in the woods. They refuse to turn over the gold, so one of the thugs rapes one of the female nudists while the other sneaks off to go steal the coins from the hermit. Our lead male shoots the rapist several times, killing him. Meanwhile, Bigfoot discovers the other criminal and crushes every single bone in his body. Suddenly, Bigfoot is the hero of the story. The nudists escape, and the movie ends with Bigfoot and the hermit walking away together while the terrible song from earlier (the one the lead nudist was singing) plays in the background.

Let’s be honest, this movie is a huge mess! However, unlike most sexploitation movies, it’s not boring. It reminds me a lot of Walerian Borowczyk’s The Beast. The plot of the film (as you could probably tell from the synopsis above) is insane and makes very little sense. In fact, this movie is just so crazy from beginning to end. But that’s part of its charm. It’s definitely an example of a “so bad it’s good” film that you have to see to believe.

This movie is pretty hard to find on VHS, but you can pick up the DVD on Amazon for only 10 bucks. However, if you’re a collector like me, the VHS is definitely worth owning if you can get your hands on it. The cover art is amazing and, like always, the awesome VHS cover art didn’t make it to the DVD transfer. The original art features Bigfoot on the top of a cliff holding an unconscious girl, with another girl lying on the ground in front of them. It’s pretty sweet and looks great in my collection.

The Beauties and the Beast is a lot of fun. While having absolutely no blood, it makes up for it with its “so bad its good” moments and tons of nudity/sex scenes. If you’re fan of sexploitation, Bigfoot, or just cheesy B-movies, then I highly recommend you give this a watch.