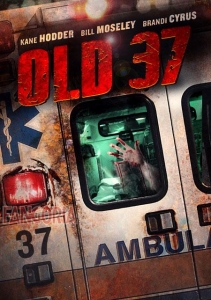 Old 37 (2015) is another film supported by crowdfunding efforts, which has become an increasingly popular funding strategy for indie filmmakers who want to circumvent mainstream studios and distribution channels in an effort to maintain creative control.

Indie horror is dominating right now, with the success of films like It Follows , We Are Still Here, Goodnight Mommy and Final Girls (just to name a few) proving that horror fans are hungry for films that buck the system and bring something fresh and innovative to the table. Tiny budgets no longer the hindrance they once were, with alternative distribution channels like VOD making low budget films accessible to the general public and word-of-mouth buzz providing some of the best marketing money can’t buy. Additionally, reduced budgets often enhance creativity and resourcefulness, making some of the least expensive films standout as some of the most interesting and entertaining.

It’s not a flawless system, of course. Many fans are rightfully skeptical of crowdfunded efforts. After heavily hyped but tragically flawed films like Muck, it’s hard to predict whether or not the final product will come close to meeting expectations. It certainly helps when filmmakers can tout some big, recognizable names attached to their film. And when you’re a film that gets to boast two industry icons and genre legends in lead roles, you’re more than halfway there to winning over the hearts of genre enthusiasts.

After a brutal and satisfying opening scene, I felt confident I was in for a fun ride. However, I was shocked to see the alias “Alan Smithee” listed as the film’s director, which almost always means the director has pulled his name from the film in protest of the final result—usually when he or she feels creative control has been taken away, resulting in a product that is not at all consistent with the director’s original vision. In almost all cases, this is a bad sign and doesn’t bode well for the quality of the film. I tried to do some digging to see if I can turn up any information regarding the director’s decision to pull his name from this film, but I came up empty handed.

Though the director’s true identity can be confirmed through internet articles and the original crowdfunding page, I’ll leave his name out of this review out of respect for his wishes to disassociate himself from this film. With that said, I am shocked by the decision since this film is actually pretty entertaining and quite competently made.

Old 37 was based on a dream of co-writer Paul Travers. The concept of a team of paramedics terrorizing already vulnerable accident victims is novel and actually quite terrifying. It also helps considerably that the two demented “paramedics” are played to sinister perfection by genre veterans KANE HODDER and BILL MOSELEY. The film hangs its hat almost entirely on this inspired casting, but fortunately it really works. When the two are onscreen, the chemistry is palpable, and it’s hard not to be completely captivated by the scenery-chewing duo.

Reminiscent of Hodder’s unforgettable hockey mask-wearing days in the Friday the 13th franchise, his character’s face in Old 37 is mostly obscured by a twisted looking leather mask. This gives Hodder another opportunity to do what he does best, convey significant emotion and instill genuine fear without uttering a word. Likewise, the legendary Bill Moseley (Texas Chainsaw Massacre 2, House of 1000 Corpses, The Devil’s Rejects) shines as the quick-witted, trash-talking brains of the operation.

Writers Joe Landes and Paul Travers do a nice job giving their psychotic leads an interesting backstory (shown through flashbacks) and creating a character depth often absent in many similar hack-n-slash films.

In fact, the first half of the film drags a bit as so much time is spent establishing both the bloodthirsty brothers played by Hodder and Moseley, as well as their hapless teenage victims. Admittedly, it’s way less fun to watch the development of the teen characters than it is when the story is focused squarely on the antagonists, making it hard not to root for the sadistic killers throughout the film.

Caitlin Harris is believable as the heroine, Amy, a struggling teen who is battling some horribly bad luck as well as an undeveloped self-esteem that compels her to go to extraordinary lengths to change her identity. I didn’t love her character arc, and I found the plot devices that put her in harm’s way a bit frustrating (feminist issues aside). But it didn’t detract from my enjoyment of the film. Olivia Alexander plays the bitchy teen queen you love to hate, and she nails her performance in a way that brought me great satisfaction when she meets her ugly and untimely demise. Caitlin’s heartthrob love interest Jason, played by Maxwell Zagorski, isn’t given much to do here other than look dreamy and move the plot along. But he turns in a convincing enough performance.

Like most slasher films, there are glaring and obvious potholes and leaps in logic that you likely won’t care a thing about. It’s well shot for such a low budget affair, and the soundtrack is solid, including tracks from The Used, Circa Survive, Night Riots and Sheppard (who make a musical cameo in one scene of the film). The practical effects are great, and there is plenty of bloodshed and brutal violence to satiate hardcore horror fans.

This movie is far from perfect. But it definitely delivers in entertainment value. The concept is creative and chilling, and there is far more substance here than you might typically get with this type of old-school slasher. The cast is solid, and Moseley and Hodder make a psychotic dream team that you’ll likely find impossible to dislike. Seeing a pair of horror legends slice and dice their way through annoying teen characters is worth the price of admission alone.

Well-written, well paced, and anchored by standout performances from horror heavyweights Bill Moseley and Kane Hodder, Old 37 is a brutal, bloody, old school slasher that is quite an entertaining thrill ride from start to finish.