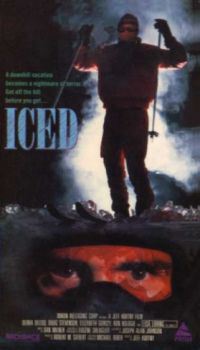 Iced is a 1988 slasher film directed by Jeff Kwinty and starring Debra De Liso, Doug Stevenson, and Lisa Loring. The movie is about a group of friends who go skiing together all the time. When one of the friends (Jeff) loses a race, his girlfriend cheats on him. He throws a fit and runs away. After everybody is gone, Jeff goes skiing alone and accidentally falls off a cliff and dies. A few years later, all the friends are invited to return to the same resort where Jeff was killed. Soon the friends start getting killed off one by one by a mysterious killer. Make sure you get off the hill before you get ICED!

Iced was released on Prism entertainment in 1988 on VHS and, like many horror films of the era, it has yet to get a DVD or BLU-RAY release. As a result, this remains an obscure gem that most genre fans are unaware of.

Iced isn’t anything new in the slasher genre.  It’s pretty typical slasher fare and true to the formula. I usually consider that a bad thing. But I think in this case it only adds to the film’s charm. I think the biggest thing I like about the movie is its setting. I have always liked snowy, wintertime settings for horror movies. It reminds me of films like The Shining and Adam Green’s Frozen, in which the setting helps create a sense of mood and enhance the feelings of isolation and foreboding in the story…it’s literally and figuratively chilling. If you’re a skiier, you might appreciate that the movie focuses so heavily on the skiing culture.

In many cases, the VHS cover art is way more appealing than the actual movie. In this case, however, the cover is rather boring. It’s just a shadowy figure standing on an icy cliff with smoke behind him, on a dark background, to create creepy atmosphere. Below that, you see a man’s face wearing a broken ski mask, as worn in the movie. At least it has a cool tagline: “A downhill vacation becomes a nightmare of terror. Get off the hill before you get…ICED!”

Before I finished the review, I just wanted to dedicate some time to talk about the film’s distributor, Prism Entertainment. I have always had a soft spot for Prism, and why would’t I? They released such great movies such as Bloody Birthday, My Mom’s a Werewolf, The Willies, Willard, Torso, and so much more. To be honest, seeing that Prism released this film was one of the primary reasons I had to get it for my collection. When I was thrift shopping recently, I even broke down and purchased the following title for my collection simply because it had that beautiful Prism label: Tell Me Why: Mammals (An innovative video encyclopedia to capture your child’s imagination)! Prism is my favorite VHS distributor, and I just wanted to give them a little shout out.

Ultimately, the movie isn’t necessarily good by traditional standards. But none of the movies I review are really good! This movie has a certain charm. It’s just so appealing and fun to watch. If you’re looking for a slasher with lots of gory kills, you might want to steer clear of this one. Unfortunately, this movie isn’t gory at all. Some of the kills are actually off screen. With that said, the kills are cool and rather unique, and I did really enjoy them.

BONUS: You get to see a grown up Lisa Loring, most known for her role as Wednesday Addams in the original 1964 show The Addams Family, get naked!

ICED may not be anything new for the slasher genre. But with cool kills, awesome 80s clothes, and just being so much fun, it manages to stand out out from other genre films of the era. Although the cover isn’t all that exciting, as a Prism release that never made it to DVD, it’s worth owning as part of any solid VHS collection.