You Oughta Know: The Mutilator

An American Vidiot Presents: “I Have a Bad Feeling About This.” 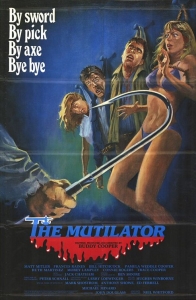 When John Carpenter’s Halloween came out in 1978, it opened up a whole new gate to the video market. As a result of that film’s popularity, video stores became flooded with hundreds of copies of straight-to-video releases from filmmakers hoping to cash in on the slasher craze throughout the early to late eighties. In order to compete for attention in the heavily saturated subgenre, filmmakers had to get creative. One tactic was to start basing horror movies on holidays, bringing us slasher classics like New Year’s Evil, Graduation Day, April Fool’s Day, and My Bloody Valentine.

Eventually, the fresh ideas ran out and genre filmmakers started saying, “Screw the plot and story…let’s just ramp up the graphic nudity and gratuitous violence!” This became a pretty popular strategy to sell to the hardcore horror fans, and it left us with some ridiculous but thoroughly entertaining films from that era. One film I want to talk about in particular is the 1984 release of The Mutilator.

So how does this movie stack up to the other slashers of its time?

The Mutilator was distributed by Vestron Video in 1985 on VHS. Although it did eventually receive a DVD release, that edition is long out of print. Vestron released 2 versions on tape, a rated and unrated version. You can tell them apart because the R-rated version has a blue backround with the cover art, while the unrated version has a black backround. If you decide to pick up a copy of this film on VHS, I encourage you to buy the unrated version. This movie has amazing gore, and from what I hear the rated version cuts a lot of that out. The last thing I should mention here is that the majority of the cast is made up of first-time actors, and this is the only role most of the actors have ever starred in. With that being said, the acting isn’t that great (as you might expect). The only actor worth noting is Ben Moore, who plays the cop in this movie. He has been in cult classics such as Two Thousand Maniacs (H.G Lewis), She Freak (Byron Mabe) and Suburban Roulette (also H.G Lewis).

The Mutilator was directed by Buddy Cooper and John Douglass and stars Matt Miller. It is about a kid (Ed, played by Miller) who accidentally kills his mother with a gun on his dad’s birthday. We fast forward some years later, and he and his friends go on a fall break to his dad’s secluded summer house. Unfortunately for Ed and his friends, Ed’s dad hasn’t quite forgiven him for the terrible incident. The kids start dying bizarre and brutal deaths, and “The Mutilator” is saving the best for last.

This movie has amazing makeup effects, done by Anthony Showe (who did makeup effects for my second favorite movie of all time, Chopping Mall) and the great Mark Shostrom, Shostrom also did effects for classics like From Beyond, Evil Dead 2, Slumber Party Massacre, Videodrome, and many others. All the effects in this movie are practical, which I really love.

Now one thing I feel I need to mention is the original VHS poster art. This was the very first VHS I felt I had to track down for my collection. It was all because of the amazing cover art. This cover is pretty iconic among horror fans. I actually think more people know about the cover art than the movie itself. I just wish the original artwork made it to the DVD and upcoming Arrow BLU-RAY release.

This isn’t a great movie by a long shot. Let me just get that out of the way. But it does have its moments, and the characters (while stereotypical) are more fleshed out and likeable than characters in many other slashers.

The story and characters aren’t anything new or anything I haven’t seen in numerous other genre films, but that doesn’t matter to me. Although the story and acting is pretty dull, this is just such a fun movie with great special effects and solid entertainment value. Whenever I am sad or having a bad day, I can just put this movie in and instantly start smiling. It’s one of those movies I can watch over and over again.

The Mutilator  is currently getting a BLU-RAY release by the wonderful company Arrow. Although I’m not a big fan of the new cover art they chose for the release, I think they are going to give the movie a beautiful transfer, and I’m so excited to see the special features included on the disc.

The main theme for this movie is called “Fall Break” by Yellen and the Breakers. It’s absolutely terrible, in a rather wonderful kind of way! The filmmakers use it at the end of the film after a very gruesome kill, and we’re treated to a 80s-style sitcom montage with all the recently murdered characters smiling and holding a thumbs up to the camera. It really kills the slasher-esque tone of the movie. I’m currently listening to it while I write this review because it is so catchy.It’s definitely out of place for the film, but I can’t help but love it. You can check out the video for the song below. But be warned, it will probably give you the totally wrong impression of the film itself.

This movie is one of my new favorite slashers that I just recently discovered for the first time. The Mutilator is great 80s cheese that I recommend to any fan of the subgenre.

Although flawed in many ways and boasting a terrible theme song, The Mutilator makes up for it shortcomings with its wonderfully cheesy B-Movie charm. With gory killings and likeable characters, it’s a movie that you shouldn’t think too much about…just enjoy the very fun ride!