An American Vidiot Presents: “He’s the man behind the mask.” 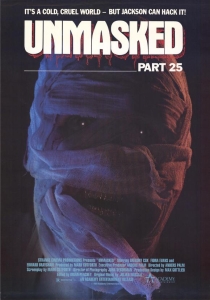 There are so many movies that were only released on VHS format, and usually it’s easy when watching these movies to see why they never got a broader release. Most of these movies are awful (when I say awful I mean not well made…many of them can be quite entertaining if you enjoy “so bad it’s good” movies) and/or completely obscure.

There are hundreds of examples of films that fall into this category, including The Icebox Murders, Elves, and Recruits (some of my personal favorites). There are, however, examples of films that were VHS-only releases that actually deserve much more exposure and should have been released on newer formats. For this review, I want to highlight one of those movies that I think is actually quite good and should be seen by far more people.

Unmasked: Part 25 is a 1989 British movie that was directed by Anders Palm and stars Gregory Cox. It was distributed by a beloved company called Academy Entertainment, who has released classics such as Bloody New Year, Killer Workout, and Witchcraft. It’s about a disfigured man named Jackson who has to cover up his face with a hockey mask. Oh, he also happens to be a serial killer. Sound familiar? Jackson kills multiple people until he meets a blind woman named Shelly, who he develops strong feelings for. It’s up to Jackson whether he wants to keep killing or settle down and start a family.

I feel like I always need to talk about VHS cover art, since it’s usually one of the best parts. This movie doesn’t have particularly amazing art, but it still looks great. There’s a man (Jackson) on the cover, wrapped up like a mummy. You see his dark eyes and jagged teeth showing through. Although it’s not mind blowing, it definitely looks good on my shelf.

I’m going to go ahead and say that Unmasked: Part 25 is an outstanding film. I was so surprised to see that this was a legitimately good movie. It is so clever. It pokes fun of 80s slasher movies, but its not a parody…and it’s not really a slasher film either. It’s hard to truly categorize it. The best description I can come up with is “a horror comedy with slasher elements.”

The story reminds me a lot of one of my favorite movies, The Toxic Avenger. You get a deformed main character who kills people and falls in love with a blind girl. I don’t know if the similarities were intentional or not, but it was pretty cool nonetheless. It also, of course, reminds me quite a bit of Friday the 13th with a hockey-mask wearing serial killer who hacks people up with a machete. It was clear, however, that the Jason reference was intentional. The title even makes fun of how many sequels were being made for some of the iconic 80s slasher franchises.

The ending of this film really took me by surprise, and we even get a very clever and well done twist. Everything about this movie is just so cool. It has amazing gore and special effects. When the film was first released, 5 minutes of gore and nudity got taken out. So, if you plan on picking up this movie, I strongly urge you to buy the unrated version. This movie delivers a surprisingly complex storyline, which I was so impressed with. To sum up, this whole movie impressed me greatly.

Out of all the movies I have reviewed so far, I recommend this one the most. I didn’t want to give away too much because I want it to be a surprise for the rest of the people who plan on viewing this movie. If you haven’t seen this one yet, I really hope you’ll check it out. It’s worth it!