Cine-files will resume in January. But I wanted to end the year with something special: my top 5 favorite horror movie resurrections from 2017.

There are so many lists this time of year. Everything is judged, rated, and catalogued somewhere between the numbers 1 and 10. But it’s fun and useful, because it gives us a chance to look back on the year in horror movies — and may remind us of a few that we saw and loved, but somehow managed to forget during the constant barrage of everything.

I can’t keep track of every new horror release, and I definitely can’t afford all of them, so my movie shopping adventures are usually confined to either my Amazon Wishlist, or my Netflix queue. But when old movies are remastered, restored, or even better yet, rediscovered, I make special exceptions. 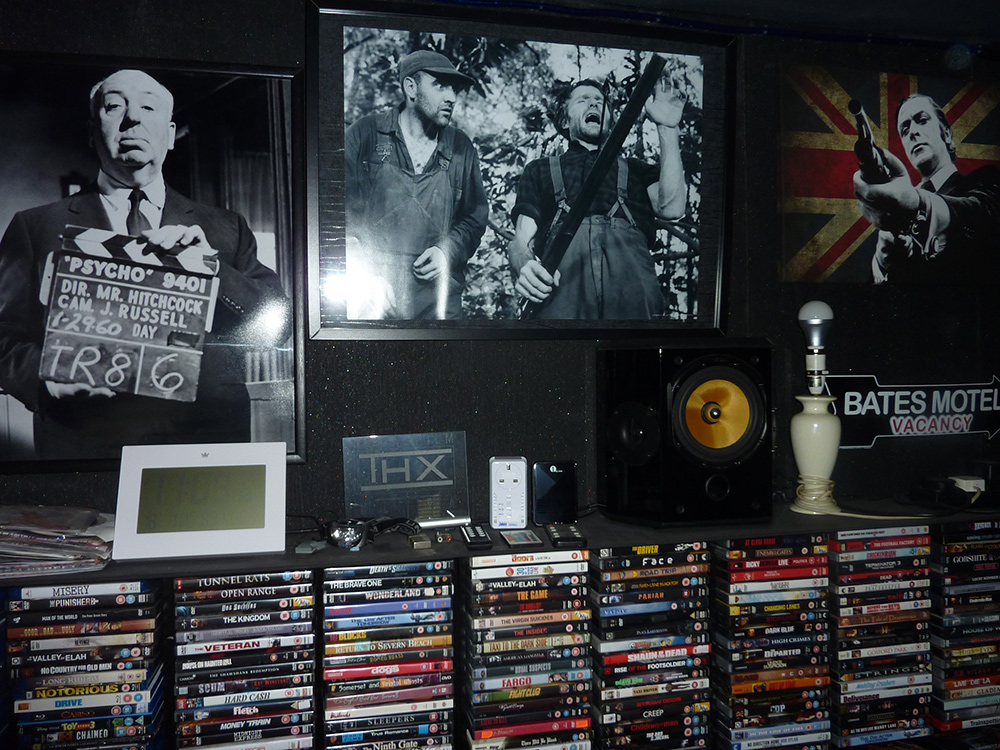 For the love of physical media

A lot of the time it’s double, triple, or quadruple dipping (those Anchor Bay Dawn of the Dead releases were getting downright hilarious), which is obviously milking a cash cow.

I honestly don’t mind buying them over and over again, as long as there’s something new. Fresh commentaries, new featurettes, deleted scenes, new cuts that seamlessly branch in all the deleted scenes, and of course new packaging — these are the bells and whistles that make me spend my money. 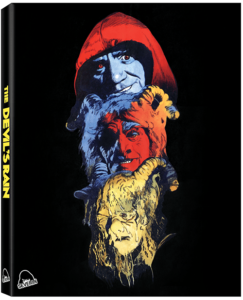 The only thing I knew about this movie was the Misfits song of the same name. It isn’t a very good Misfits song. But this year Severin educated me by restoring and rereleasing this dusty little desert devil drama.

Ernest Borgnine plays the leader of a cult, and he explodes with personality. It was a bit distracting, though, because I kept picking out all the perfect places there were for him to smile and say, “Wait until I tell all the fellas I drove Snake Plissken today.” Shatner is the hero, for a while, then Tom Skerritt takes over. I know, Shat takes second seat to Dallas!! WTF!?

So time goes by, there’s intrigue, sacrifice, shootouts, eyeless minions, a gateway to Hell, and a magic bottle bowl thing with souls in it. Then comes the reason to own this movie…

The full-process mass minion body melt, from the first drip to nothing but gooey bubbling puddles! Dozens of actors and extras are all over the Satanic church on the inside and outside, and each one is slowly turning into flesh-colored boogers. It is ASTOUNDING! And more than a little disturbing, too.

An important notice: I ordered the hellacious bundle package that included a prop replica medallion and limited edition sleeve, and even though there was an availability snafu with the medallions, Severin responded to my email questions quickly and went out of their way to help me get that beautiful medallion around my heathen neck. A great company!

Perfect remaster here, the desert scenes are so clear that there was dust in my living room, and the multi-colored melting scene revealed all the melting sloppy candle wax chocolate ice-cream cone dribbles and popping bubbles of gore, large and small. 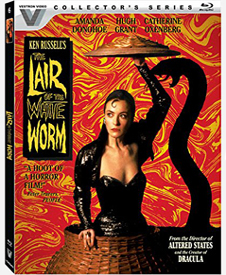 Lionsgate! Guys, please. Knock $5 off these things, they’re so gawddamn expensive! Alright, focus on the positives, which just happens to be everything but the price.

I saw LOTWW for the first time when I was a little brat, and I didn’t understand any of it. I was bored as hell. See, if there is going to be content ratings and an age limit for certain movies, this is where the ‘powers that be’ need to get their thinking from: a ten-year-old shouldn’t see LOTWW. Not because it’s extremely kinky and blasphemous, but because said ten-year-old won’t understand it! 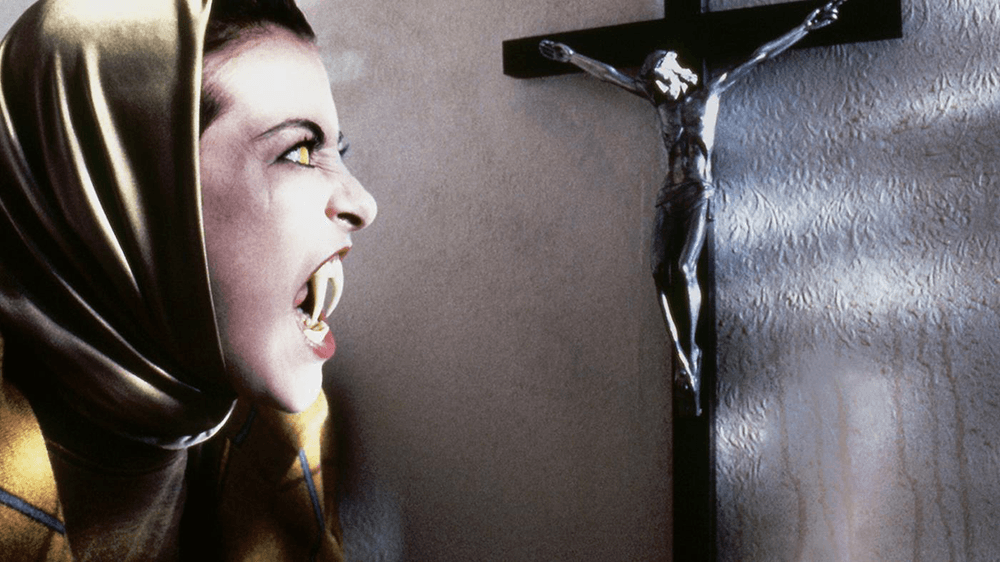 Fast-forward decades past the mom n’ pop video era, and Lionsgate/Vestron release a shiny new restored LOTWW disc. I had to give it another chance, so I dropped an excessive amount of coin (for a non-import single-disc in no special packaging!) and got it into my collection.

Fucking brilliant! This movie is so angry at Christianity!

The succubussy title character is a gorgeous black latex lass by day, and a human-sized white snake by night. Squirm-inducingly sharp and long fangs and elaborate facial makeup effects make this one of the most memorable movie monsters I’ve ever set eyes on. The scene where she scowls at a crucifix then sprays hot venom on it is a classic. Definitely GIF-worthy. GIF makers, get on that. The world needs it. 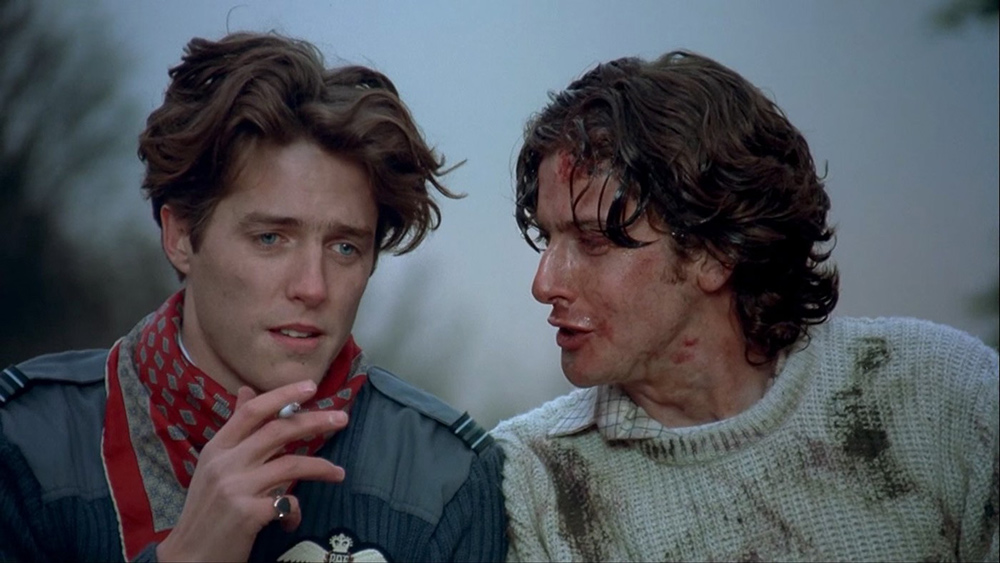 Hugh Grant and Peter Capaldi star as intrepid . . . I kinda forget . . . intrepid British smart guys, on some kind of quest to find something, or learn something, or kill the dominatrix-snake, or maybe all three. It’s very British, and has some really clever humor in it. Seeing this made me want to watch and intensely analyze the rest of Ken Russel’s movies. He’s a delightful old English gentleman on the commentary and delivers a lighthearted descriptive play-by-play, with memorable anecdotes.

I don’t remember the picture quality when I saw the VHS as a kid, but it certainly looks crystal clear here. The worm scenes and dream sequences are especially colorful and full of vivid, noticeable detail. 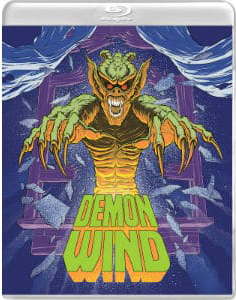 This was a total impulse purchase. I had no idea what it was, except that it was bursting at the zippers with monsters, had been likened to Evil Dead, and it had a 3D lenticular cover. I didn’t care how bad it was…I had to have that cover!

The good news is that this movie is a blast! It is so much fun, and makes a great double feature with Spookies. It is very similar to Evil Dead, especially the cabin scenes. There are a few more demons in this, though. 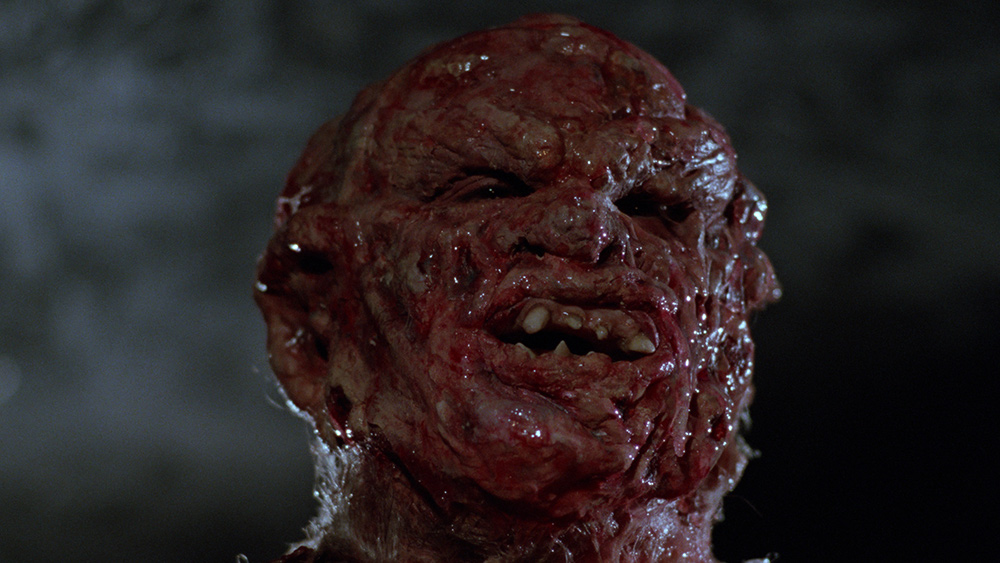 The acting isn’t very good, but who needs things like that when you watch a supernatural splatter film called Demon Wind? Good performances and logical character decisions would soil this grail of horror purity.

We see many old friends: the old man doom herald, the nasty jock, the determined and headstrong lead, and tons of in-camera practicals. It was a breath of fresh air. 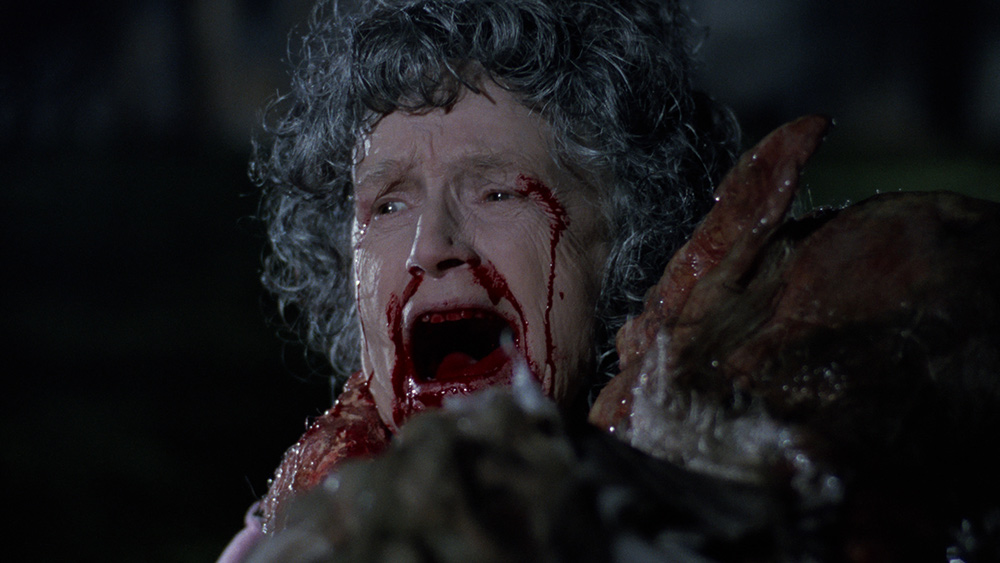 I haven’t watched the extras yet, but the picture is as good as something like this is going to get. It’s clean for the most part, but the dated look in general gets a bit distracting. But get ready for demon mayhem, and a bitchin’ 3D cover. 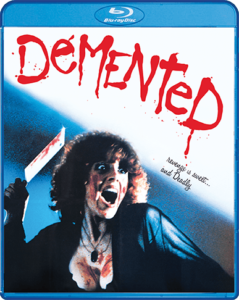 The fact that this even exists on blu-ray is mind-blowing. This is just one of those movies I can’t stay away from, especially when the main character Linda completely loses her mind and goes on the climactic killing spree. She laughs and cackles, and every new drop of spilled blood seems to push her further over the edge.

It’s one of those grim and unpleasant revenge movies, but in some cases the revenge is so sweet and brutal and true that it makes the movie watchable. This one has the added Nutrasweet flavor of 80’s bad taste and cheese. 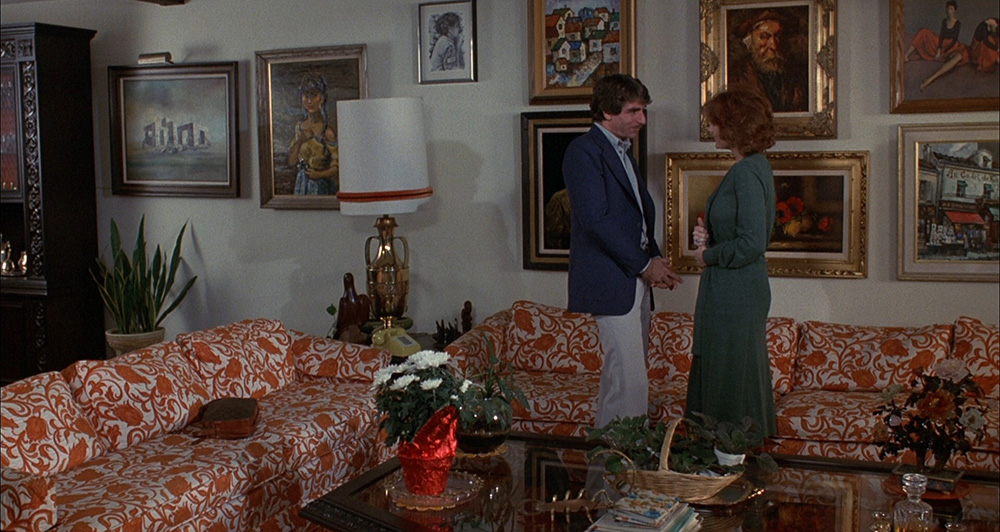 All the things he looks at seem to wither after his dirty eyes gloss over them. His breath is a subtle green mist of genital ice-cream socials. Ick! Yet his dubious presence makes the movie even more watchable! 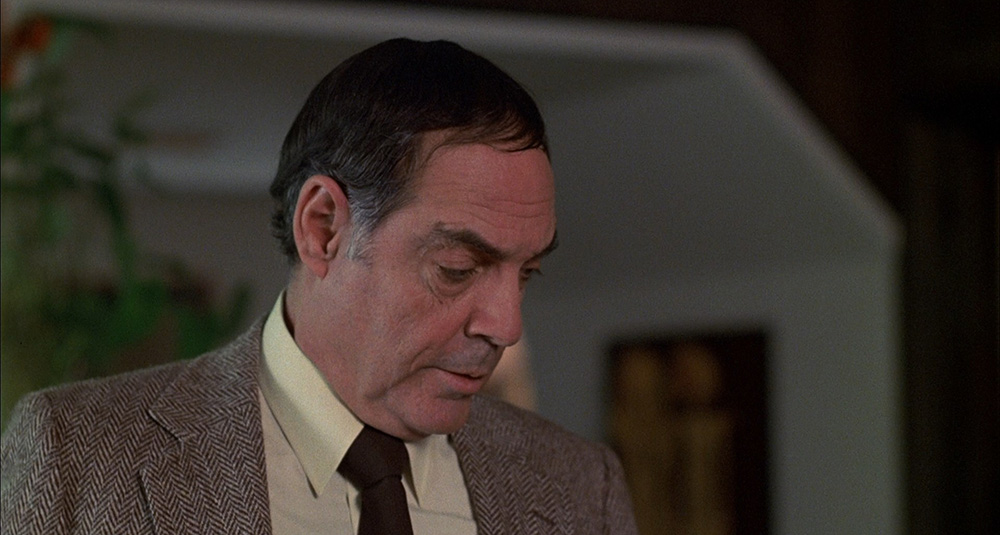 I’m so glad I have this movie. Finally. Another acquisition from the VHS days. 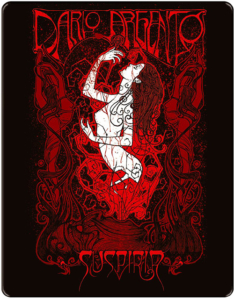 Did you expect anything else? Of course not. This horrid, gothic, bleeding ballerina horror miracle has never sounded so sharp and thunderous.

The best test of a Suspiria transfer is the very beginning, during the timpani eruption. If that noise shakes without cracking and popping, you’re halfway there. Then the next few minutes . . . the airport, the rain, the river, the Black Forest, the streetlights coating Jessica Harper’s face in red, blue, and yellow . . . will confirm your mind is going to be blown both surgically and artistically.

Synapse got this so right. It’s visual perfection. My whole living room exploded with color, whether during red-tinted scenes, blue-tinted scenes, or the eyeball-slicing lightning. And in the new featurettes, the process used to haunt every frame with unnaturally expressive color is well-explained.

Suspiria is one of those movies you don’t just watch, you fall into it. It focuses on your vision and hearing to bewitch you. 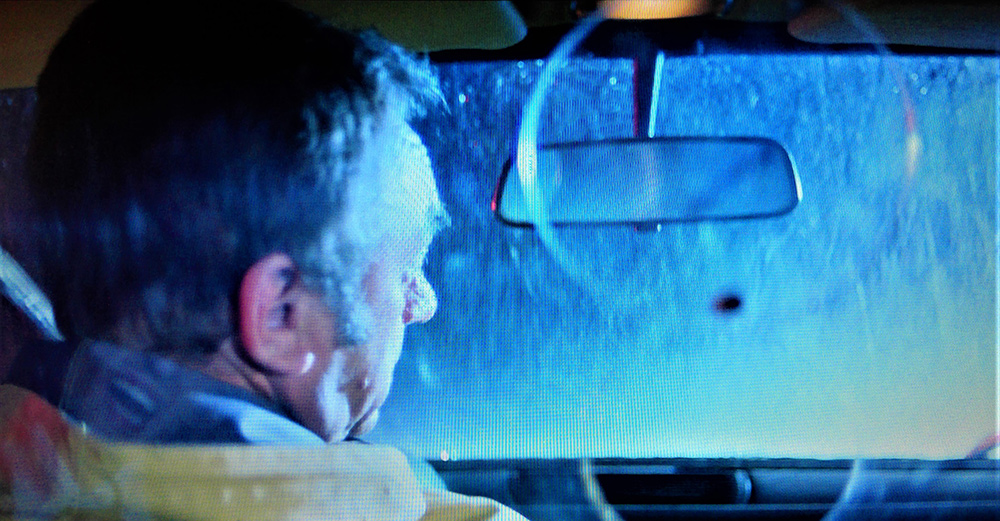 The movie was originally intended to have teen girls as the protagonists, but of course there are laws against exposing young’uns to violence and debauched behavior. So in order to achieve the effect of childlike smallness, Argento had all the ceilings built very high, and the doorknobs all hover at an upper arm length. Every time I watch Suspiria or read about it I learn something new. Such dark magic.

And now to a negative. I noticed a pretty big running time discrepancy. All of the previous versions of Suspiria I’ve seen have supposedly been uncut. Some list a running time of 96 minutes, and some list 97 minutes. But I’ve seen it so many times that I can tell it’s been the same version. Uncut. Or so I thought. 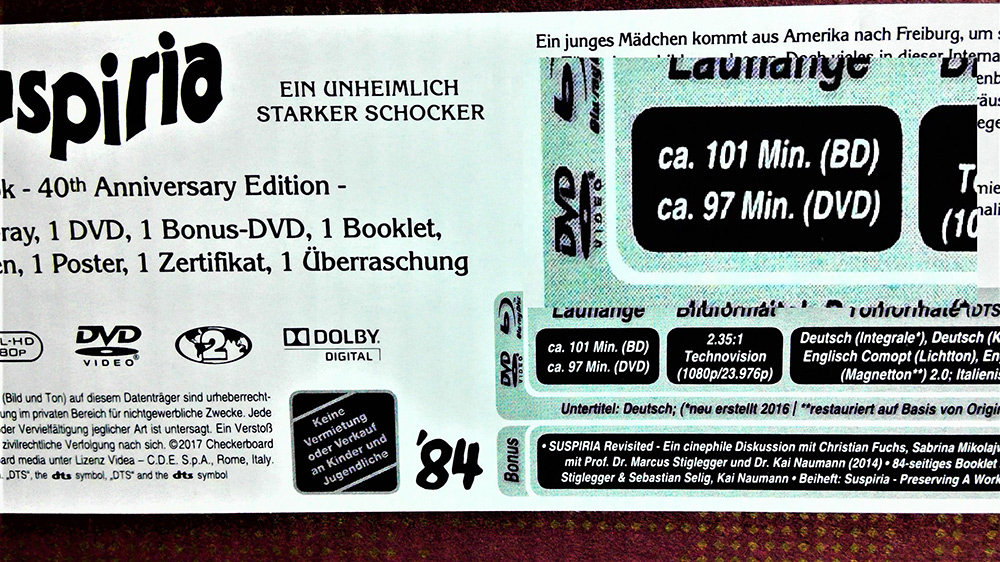 On my German import boxed set, there are TWO cuts of the movie, one of them being the 97 minute cut I grew up with, but on the other disc, there is a version with a different running time. 101 minutes. I’m guessing it might be the 20th Century Fox version that they had copyright problems with. Maybe in Germany it’s legal. But that’s a pretty big fucking difference, 97 to 101. And I don’t have a region 2 player. I just bought the German set because it’s gorge beyond fathomability.

I’m not complaining, because even after all the stuff in the Synapse set, there are still mysteries about Suspiria that I have yet to discover.