When it comes to real scares and bone-chilling suspense, it’s hard to compete with the horrific horror treasures being mined by Thailand filmmakers.

The purpose of horror films is to frighten, disturb, or otherwise unnerve you with tales of vampires, ghosts, zombies, witches, serial killers, etc. And it’s no secret that I feel the best horror comes from countries other than the USA. Asian countries, like South Korea, are untouchable when it comes to scary ghost stories. And with all due respect to Japan, Thailand does it the best.

The following list is far from all-inclusive, but it does contain what I consider to be the two most frightening films ever made, Shutter and The Screen at Kamchanod. I do not recommend watching them alone or at night. Unless, of course, you enjoy sitting up until dawn with all the lights on watching kitten videos to take your mind off what you just saw… 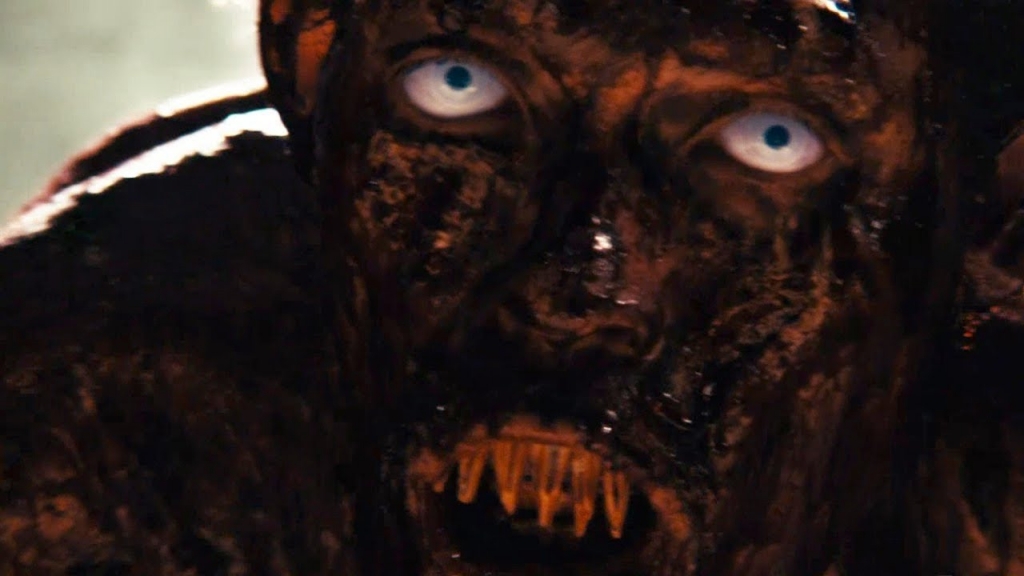 I think the take-away from this film is avoid driving in Bangkok. Let me explain. Jeff (Cary Elwes), his wife, and son are involved in a horrific car accident that only Jeff survives. While recovering, he begins to hear and then see strange and terrifying things. We learn whenever he’s at a location at the exact time someone died unexpectedly or under particularly emotional circumstances, the trapped soul manifests in an audible and visual manner. In other words, he’s seeing ghosts and freaking out.

Jeff’s nurse coaxes him to visit her spiritualist aunt. She in turn refers him to mysterious recluse Warren Mills (William Hurt) who lives in the middle of nowhere. Mills explains that along with the souls of his wife and son, Jeff’s soul is also trapped in a between-worlds shadow realm. And if he doesn’t reconnect with it soon, his physical form will fade away.

The solution? Journey deeper into nowhere to an ancient portal guarded by Buddhist monks, pass into the shadow realm, and fend off peckish demons while searching for his imprisoned soul. Oh, and also rescue his wife and son, too. Piece o’ cake, right? I won’t give away the ending but will say it’s not what you’d normally expect.

Hellgate, an American/Thai collaboration, won’t make you jump and scream like a pre-teen girl. But Hurt’s brilliant performance and the suspense-laden story will keep you riveted. And even though the film budget was only $5 million, nothing about the production seems cheap, which is impressive in this age of billion-dollar superhero flicks.

You can watch Hellgate, released by IFC Films, on digital streaming platforms like Amazon Prime. Be sure not to confuse it with the 1989 American horror flick of the same name. 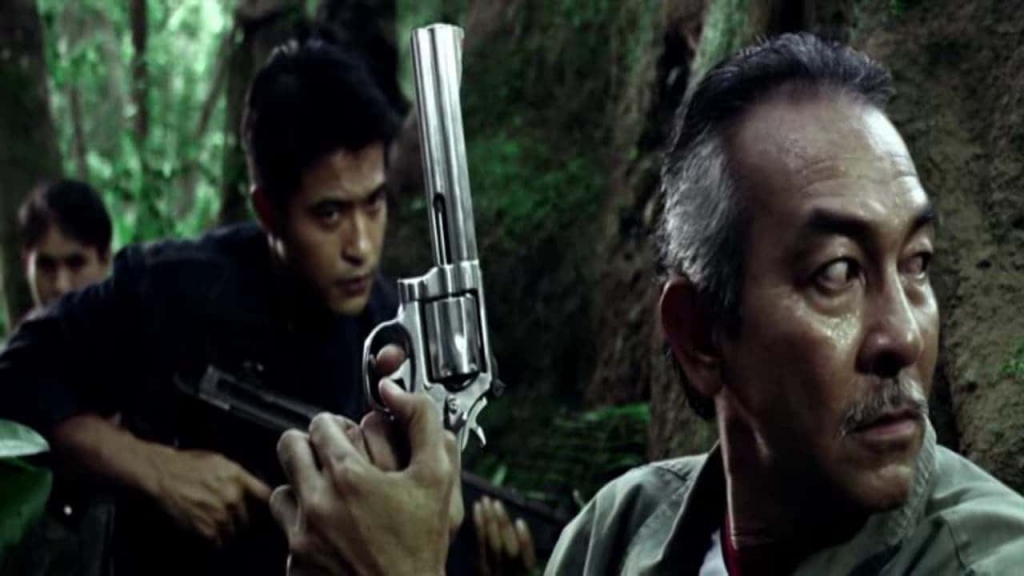 This is a cop/horror/fantasy mash-up that will leave you both wide-eyed and saying “WTF did I just watch?” at the same time. Welcome to the wonderful world of Thai cinema. OK…years ago, two criminals stole an extra large and extra magical coin from a remote village. One of the criminals was the father of the present-day storyline’s lead cop. After serving a prison sentence, the other criminal became a monk near the remote village.

Now, the lead cop and his men are chasing bad guys into a forbidden jungle. The bad guys kill the monk and steal the magic coin he’d kept all these years. As the chase continues, things get awfully weird. They’re attacked by swarms of carnivorous tiger wasps, carnivorous lizards, and also beautiful women…who turn out to be carnivorous. You see, the remote village is cursed, and its inhabitants morph into flying vampires every full moon.

Still with me? It gets weirder. The coin, once fitted back into its receptacle, grants the person returning it the power to travel back in time. Since almost everyone is dead, the lead cop decides to use it to undo all the bad stuff that happened. And we all know how well messing around with the timeline works out, don’t we?

Admittedly, Vengeance is a bizarre movie. Cops and robbers, time travel, and vampires? I say, why not? Not only does the plot remain cohesive, but the scenery is gorgeous, the chase sequences are exciting, and there is an abundance of inventive camera work. Oh, and there’s an Amtrak-sized snake as well. Honestly, what more could you possibly ask for?

Vengeance can be found via YouTube for free via MonoGlobalTV. 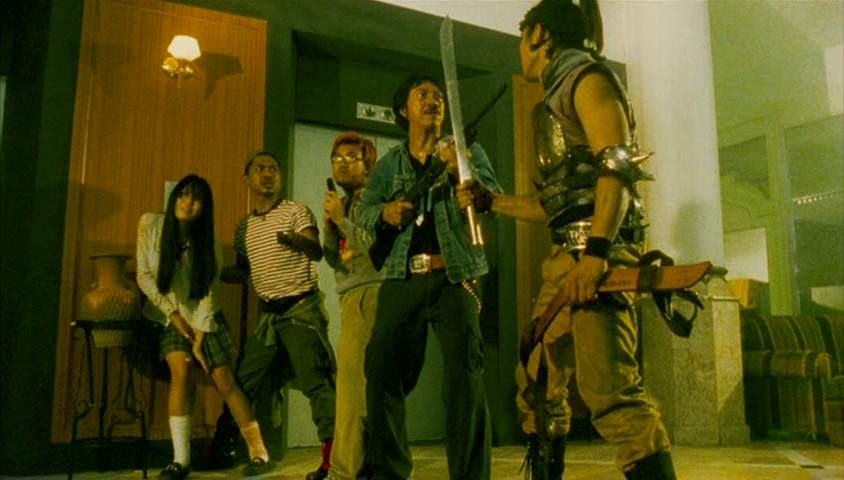 This movie is beyond bizarre. I have no proof, but I’d wager the writers and filmmakers were chasing shrooms with Nyquil when dreaming up this fourth wall-breaking, screwball zombie comedy. I swear there’s a plot, but for the life of me, I can’t figure out how to explain it (Spielberg using a PowerPoint presentation couldn’t explain it).

Let me attempt a summary: The deadly SARS-4 virus reaches Thailand via an infected bug (this is shown to us via some strange animation). The bug bites a guy, the guy goes zombie and eats a cat (but not the cat’s tail). Someone’s harmless pet python eats the tail, which causes the snake to transform into a subway-sized, man-eating monster that, wait for it, spits and hisses like a kitty cat.

Next, the daughter of a crime boss gets kidnapped and held in a zombie-infested building, The boss calls on Master and his student to rescue her. They do but end up battling the gigantic cat/python creature using a, uh…battery-powered lightsaber.

There is nothing about this film that isn’t goofy or nonsensical, which isn’t necessarily a bad thing as it is supposed to be a zom-com. And although Bangkok Zombie Crisis makes Shaun of the Dead look like a boring British documentary, its unique style and utter zaniness will stick with you for a long, long time. Whether you like it or not. 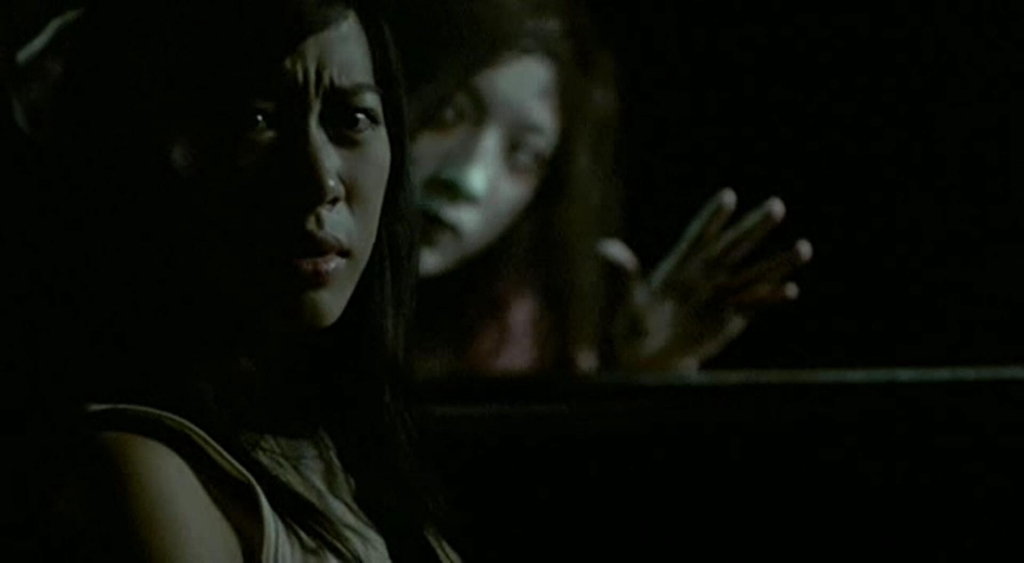 What’s your favorite scary movie? This is mine. In my opinion, it is the best ghost movie ever made. It’s better than Ringu, Ju-on, The Conjuring, Insidious, The Shining, and even Poltergeist. This may seem like blasphemy to many, but it’s simply the truth. So why is it so much better? Let’s find out.

While driving, Jane and her photographer boyfriend hit a young woman walking on the road. They stop, but Tun convinces Jane to leave the scene without checking to see if she’s dead. In the following days, Tun finds shadowy images on the pictures he develops. Jane thinks it’s the woman’s ghost, but Tun refuses to believe it…even though he learns some of his college buddies have also been experiencing strange things after the accident.

Tun’s neck begins to ache for no reason. A check-up reveals nothing out of the ordinary, except that Tun’s weight has inexplicably doubled. When the college buddies begin committing suicide, Jane starts investigating and discovers the woman was a classmate of Tun and his friends — and that she was raped. Yep. Vengeful spirit. Even though Tun didn’t participate in the rape, he took photos while his buddies did, so Jane leaves him. Thinking the ghost will force him to kill himself, too, Tun understandably totally wigs out and tries to capture her on film. What he finds makes you realize there can be worse things than suicide.

The tone of the film is set early, and it’s that of imminent doom. From the outset, you feel unease that gradually and inexorably builds into a sense of overwhelming terror. The scares make you jump, and the tension will knot your muscles. My jaw hurt for days because I’d clenched it so much. Movies don’t really frighten me anymore. This one did, and that’s why I love it so. One last thing: whatever you do, avoid the American remake. It’s abysmal.

No excuses to miss this one! You can watch Shutter for free right now on Vudu or Netflix. 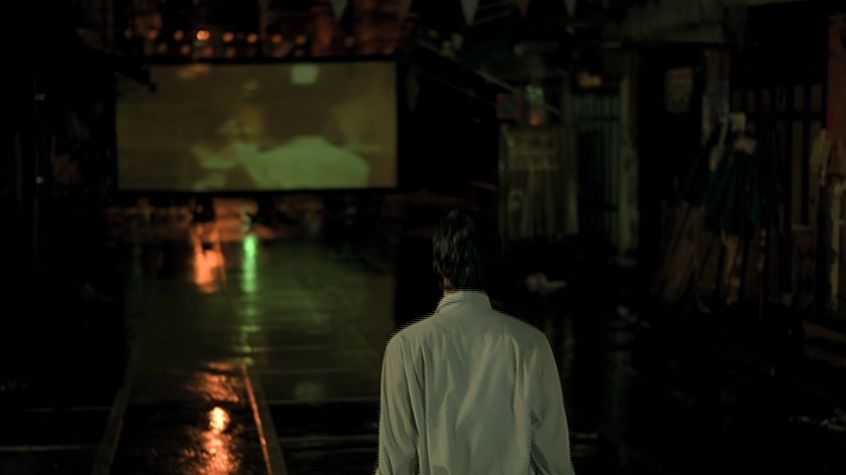 If you think you’ve seen it all, that you can predict how every horror film will turn out and that nothing scares you anymore, then I challenge you with The Screen at Kamchanod. Unpredictable and unrelenting, this Thai gem weaves twists and scares into a story that grabs your attention and will not let go.

In 1987, a movie was screened in a remote forest clearing. There was no audience. Well, no living audience. The projectionist went mad and refuses to relinquish some type of amulet. Twenty years later, a doctor obsessed with the paranormal investigates. He tracks down a copy of the movie and screens it in an abandoned theater with fellow researchers.

I lost track of the number of scares packed into this scene, but they are legion and make you hope your chair or sofa is Scotchguarded. Afterwards, each member of the doc’s little group are assailed by the spirits that showed up at the screening, spirits that seem to want nothing less than to frighten their victims to death. Eventually, the doctor along with a reporter, takes the film back to original forest for another screening. I mean, what could possibly go wrong? As it happens, just about everything.

Everything you see in this film is there for a reason, and nothing is as it seems. I was dumbstruck by how subplots and subtext dovetailed into a perfect denouncement. This is some seriously uncanny filmmaking, folks, and I can’t stress enough how groovy it is. The only aspect preventing The Screen at Kamchanod from topping my all time greatest horror movies list is the lack of background information on a certain monk and the reason why the spirits are so pissed off. But these are just niggles and do not take away from the film’s overall grooviness.

Of all the films mentioned in this article, it looks like you’re going to have the most difficult time tracking down this one. We couldn’t find anywhere it was streaming legally, and the only place it looks like you can snag the Taiwan DVD with English subs is via Ebay. If you find another source, please let us know in the comments below!