Is Bigfoot real or a myth? HOAX may not answer that question for you, but this surprising film is determined to make you afraid of camping in the woods. 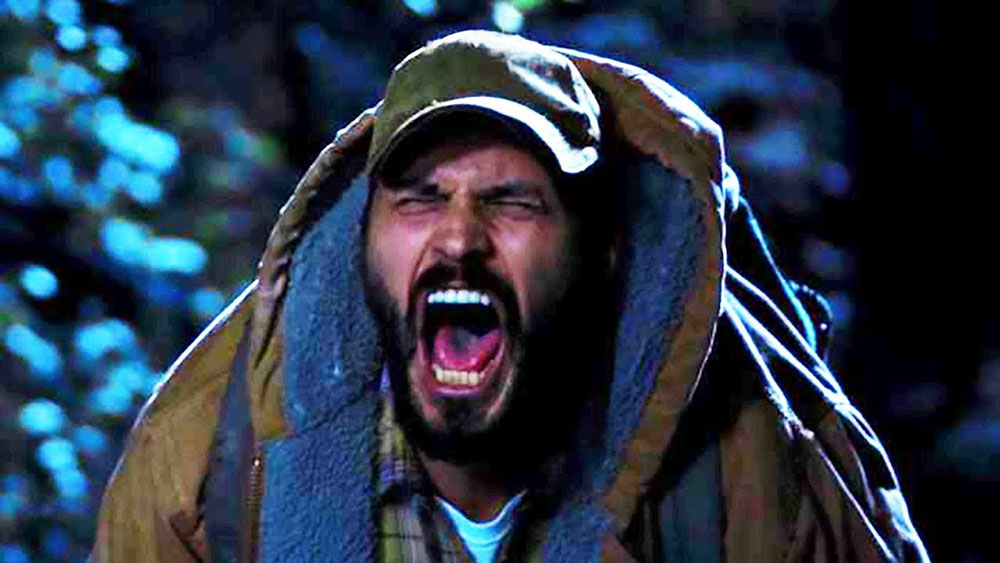 This is my first review for a Dread Presents production, even though I’ve enjoyed a few of their releases over the past couple of years. Dread has always, in my experience, released good-to high-quality movies made by and for horror fans. Movies like TERRIFIER, TALES OF HALLOWEEN, EXTREMITY, THE GOLEM, and more have been well received by horror fans.

Dread Presents brings a Bigfoot tale to home video, and as a sub-genre of horror, Bigfoot needs some better representation on film. Off the top of my head I can think of films like LEGEND OF BOGGY CREEK (a Joe Bob Briggs favorite), HARRY AND THE HENDERSONS, and the Bigfoot episodes of “The Six-Million Dollar Man.” Let’s find out if Dread brings the goods with their 2019 movie, HOAX.

Opening with an homage to FRIDAY THE 13th PART 2, a small group of hikers set up camp in the mountain wilderness of Colorado. Seated around a blazing fire, one of the hikers tells tales of Bigfoot sightings in the Colorado mountains, hoping to scare the group with a monster tale before everyone settles in for the night. But what starts off as a tall tale turns all too real for these college students as they are attacked, dragged off, and killed. All but one of the hikers’ bodies is accounted for, and she remains a missing person.

With the story still fresh in the public’s mind, a seedy reality television producer pitches a televised event where he and a hand-picked crew search for evidence of Bigfoot and the missing hiker. Given the go ahead, this Geraldo Rivera wannabe sets out to capitalize on the tragedy of the hikers and gain some notoriety for himself — the safety and lives of his crew be damned.

HOAX is a movie that screams to be a found-footage film, but thankfully the filmmakers didn’t go that route. 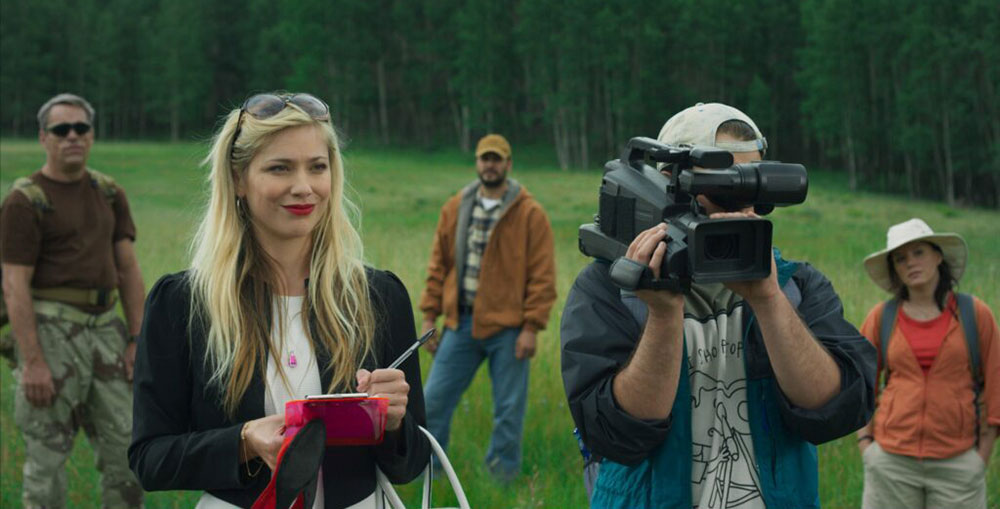 I don’t think I would have liked HOAX as much as I did if it had been made in found-footage style.

That being said, the first hour of HOAX is pretty standard fare. A cast boasting genre stars Adrienne Barbeau and Brian Thompson holds the movie together. They are a joy to watch on screen and make their characters, even the seedier characters like Ben Browder’s slimy television producer, Rich Paxton, and Shoshana Bush’s vein television host, Bridgette Powers, likable.

The last half-hour of HOAX, in comparison to the preceding, goes off the rails. Without revealing too much, I will say that there are some clues in the first hour about what’s coming, but that first viewing of HOAX knocked me on my considerable ass.

The filmmakers scored (so to speak) big when they signed Alan Howarth, long-time collaborator of John Carpenter, to score the movie.

HOAX is filled with nods to the filmmakers’ favorite 1980s horror movies, many of them John Carpenter films, and the music adds another layer to that nostalgic feel. When I started watching the movie, I thought the opening scene had strong THE FOG vibes because of Howarth’s Carpenter-esque score, but the crew commentary track reveals they were going for a FRIDAY THE 13th PART 2 vibe, which I still don’t get.

My knowledge of Bigfoot movies being limited, I can’t compare HOAX to what’s come before, but I can state that I had a lot of fun watching this film and its jaw-dropping, “did I just see that” finale. 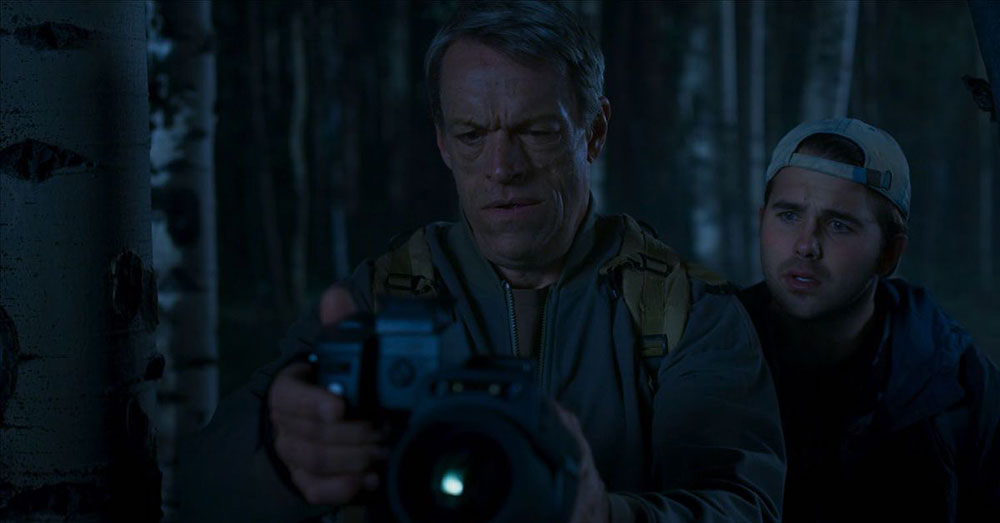 The featurettes are interviews with cast and crew about the making of the movie, their characters, what they know of the Bigfoot legend, etc. There’s nothing in-depth about these featurettes, but fans will get a chance to see the real people behind the characters in the movie. For anyone wondering how HOAX snagged Adrienne Barbeau for her cameo, watch the Alan Howarth featurette for the story Barbeau’s casting.

The two commentaries are a fun, easy listen.

The first commentary with the co-writers, director, production designer, and director of photography goes into more technical details about making an indie movie, some background into how they all met, casting a movie, finding their shooting location, and some great banter.  This track was a joy to listen to.

The second track with actors Ben Browder and Cheryl Texiera is moderated by writer/director Matt Allen. This track is a good combination of personal behind-the-scenes stories and jokes and details on acting in an independent horror movie in the woods of Colorado.

Both commentary tracks are a good listen for fans, and the tracks do not repeat a lot of movie making stories.

The extras include a HOAX trailer as well as trailers from other Dread Presents releases. 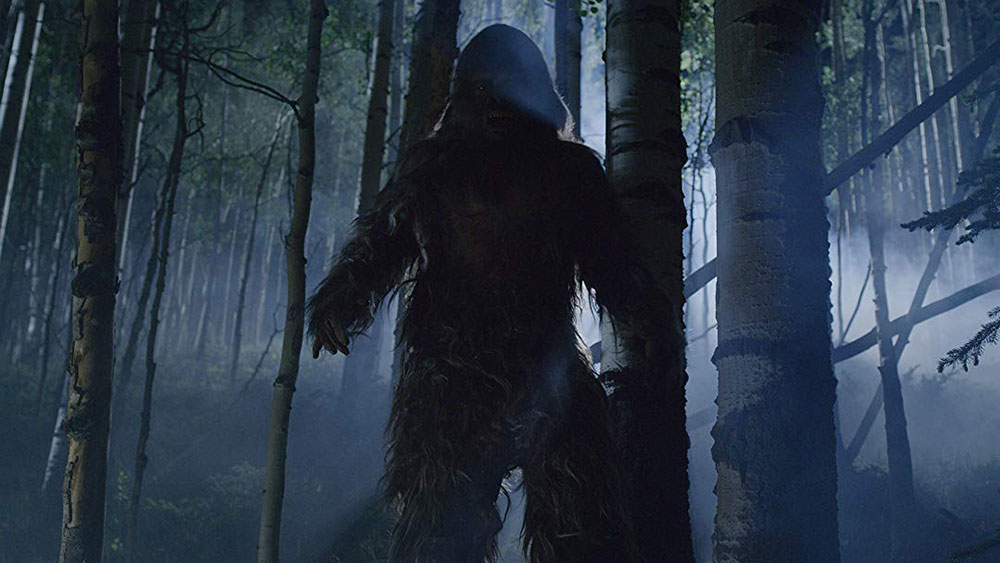 HOAX is a surprise hit for me. I didn’t go into this with many expectations because of the Bigfoot angle, but I ended up enjoying this thrilling and well-made monster flick quite a bit. The commentary tracks added another level of enjoyment to watching the Blu-ray, and I cannot recommend this Blu-ray enough.