“Clickbait” is a horror satire that delivers an unapologetic commentary on millennial culture and its obsession with internet fame.

Bailey (Amanda Colby Stewart) lives for her streak; five bolts on Str33ker means internet fame and all the desirable perks that go along with it. When her competition, Laura, is diagnosed with cancer and bumps Bailey out of the top spot, drastic measures need to be taken. After all, if you’re not trending, you’re not relevant.

Clickbait is an unapologetic social commentary on millennial culture, where social media is everything and nothing else matters. This horror satire tackles a few different topics, including—but not limited to—the corrupt police force, the dark desires hidden deep within human nature, and the exaggerated importance of social media.

Michael J. Epstein and Sophia Cacciola, the duo that brought us Blood of the Tribades, directed this unique horror satire last year. Since then, it has won a number of awards and was selected to be a part of the Boston Film Festival this past Wednesday.

The villain in Clickbait is not a person, but an idea; an idea any of us could fall victim to in the age of social media. As our heroine, Bailey, describes a home break in to the police, she is constantly stressing that the underwear riffled through was “sexy.” Her insistence on this one word reveals a twisted state of mind prioritizing her image over her safety, which becomes a reoccurring theme throughout the film.

What makes Clickbait so effective is nearly everyone in this world holds Str33ker above all else. Bailey’s friends are more focused on her ratings and their own entertainment than they are with her safety. As her stalker posts videos that get more and more invasive as time goes by, her fans on Str33ker are captivated rather than concerned. Bailey and Emma’s professor, for example, praises Bailey for her videos and seems indifferent about her academic prowess. Additionally, her friends try to comfort her by telling her that Laura—who is dying of cancer—is “milking it” to get higher ratings.

You’ll find yourself rolling your eyes along with Emma (Brandi Aguilar), “the poop,” as Bailey is given all the breaks thanks to her Str33ker success. 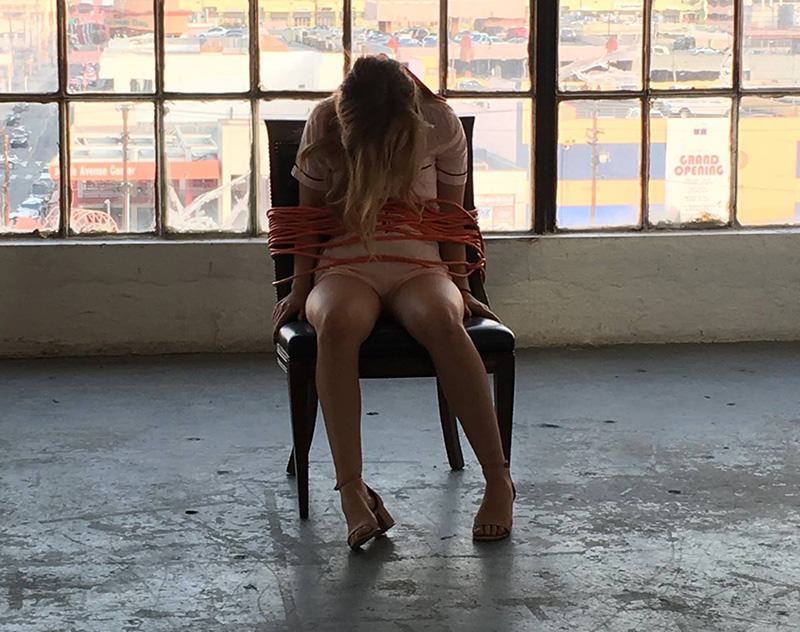 There are many things the film does well, my favorite being Emma and Bailey’s reoccurring dream sequence. Featuring the ever present Trump mask donned by Bailey’s stalker, the dream pays homage to a number of horror movie tropes, and I am all for it. You have your classic slasher movie shower scene, a stalker wearing black gloves, and a mask painted white. The dream is introduced early on and is visited later as well with a much more sinister overtone.

Epstein and Cacciola have a knack for capturing artistic details that put their films in a whole other category.

One of these details was the Toot Strudel ads that transition the film from one scene to the next. Toot Strudel, the radioactive take on Toaster Strudel, offer even more over the top humor reminiscent of a late night comedy sketch.

When confronted with the overdramatic, borderline ridiculous, Clickbait I immediately thought of the recently popular Fox television series, “Scream Queens.” Amanda Colby Stewart gives us a convincing lead in Bailey, who is so obsessed with fame, that she is willing to sacrifice anything for it—including her own life. Her on screen chemistry with Emma kept me engaged with ease. However, I did find Aguilar’s overacting subtracted from the overall experience. I much preferred Colby Stewart’s take on her character.

That being said, Aguilar’s final scene is near perfection, and I’d suggest sticking around to watch our supporting character, Emma, grab the spotlight.

Horror comedy is not a genre I delve into very deeply, but Clickbait has given me a reason to start. Unlike some of the more mainstream films in this genre, Clickbait offers us a unique and entertaining storyline with a deep message about millennial culture and its dangerous obsession with fame.

This review is from the Massachusetts Premiere of CLICKBAIT at the Boston Underground Film Festival on Wednesday, March 20 at 9:45 PM.