The Cat and the Canary (1978) is a superb and stylish murder mystery and dark house horror film that delivers equal amounts of thrills and amusement. 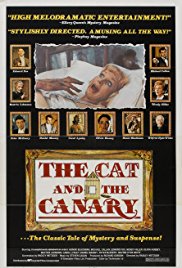 The Cat and the Canary, starring Carol Lynley as Annabelle West and Wilfrid Hyde-White as Cyrus West, is one of four adaptions known to me (the other three being the 1927, 1930, and 1939 versions) of John Willard’s extremely popular black comedy play of the same name.

In the 1978 version, directed by Radley Metzger, a plethora of colorful (not to mention kinky) cousins gather at their rich relative’s estate to hear the reading of his will (sounds like that Scooby Doo episode with the galloping green ghosts, right?).

What follows is a stormy night of mischief, murder and madness.

There’s a killer on the loose who believes he’s a cat. There’s a beautiful young woman who has just inherited a vast sum of money, and there’s a rogue gallery of shifty, money-hungry, cousins all eager for her demise — lest they be the second heir and get ALL the money.

This dark house horror film has a lot going for it, including a moody and macabre atmosphere, taboo trysts, equal amounts of chuckle and chill worthy scenes, and a superb cast to bring it all to life (or is that death?).

Death hangs like a noose over all of those who find themselves spending a night in the old West mansion. Well, almost all. One man with sharp nails, like a cat’s talons, is prowling the estate.

“A house is not a cage” Mrs. Pleasant, the estate’s caretaker and servant (played wonderfully by Beatrix Lehmann) points out.

Even if it were, you can bet this cat would know where to find a key.