Festival hit “Attack of the Demons” is a visually impressive animated film that pays loving tribute to the genre in a unique and memorable way. 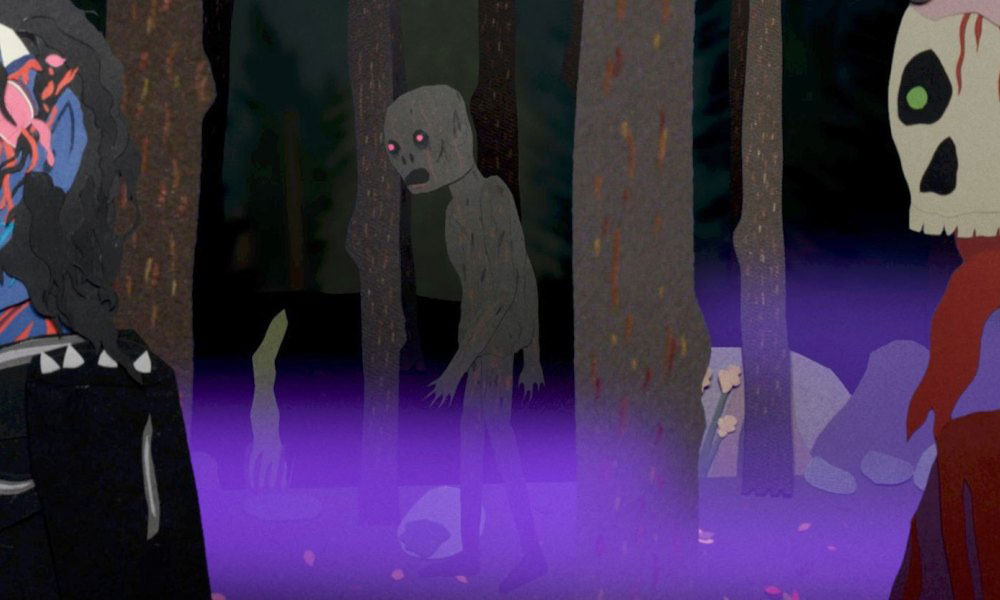 Animation and horror is a natural fit, but animated horror has mostly been the domain of traditional Japanese style anime with movies like Vampire Hunter D, Death Note, and Blood: The Last Vampire, among many others. Less traditional is stop motion animation horror in the style of the long-time comedy hit South Park.

Animator and director Eric Power, along with screenwriter Andreas Petersen, look to break out with the paper cutout, stop-motion animation horror movie Attack of the Demons.

Set in the quiet town of Barrington, Colorado in 1994, Attack of the Demons starts with the town residents preparing for their 10th Anniversary Halloween Music Festival. Unbeknownst to the townspeople, the king of the demons lies dormant under a nearby mountain. But soon a curse will be spoken by an acolyte to awaken the king and create an army of undead demons.

We meet Kevin, a college-aged lifetime resident of Barrington who lives with and cares for his grandmother.

Kevin is the stereotypical horror nerd who has a deep knowledge and love of the genre, but that love isn’t shared by anyone else in his world.

Former Barrington residents Jeff and Nat return in time for the festival. Jeff is being shipped off by his parents to live with his uncle, who lives in a cabin at the top of the mountain. Nat is traveling to Barrington to see her favorite band play at a bar, while her obnoxious boyfriend and his best friend go to the main music festival.

During the music festival, the demon acolyte appears as the main musical act and speaks the incantation, performing the ritual that raises the demon and begins to turn the townspeople into murderous undead demons.

Kevin, Jeff, and Nat unite and must work together to learn how to defeat the king of the demons before the curse wipes out the entire town. The trio will get help from Jeff’s reclusive uncle, along with a demon fighter named Stuart who has come to Barrington to fight the king of demons.

The animation style used by Eric Power is similar to the South Park style, but not nearly as crude or cheap looking as the comedy hit.

The animation is quite detailed and smooth in motion. Power creates some incredible visuals that harkens back to the horror movies of the 1970s and 1980s.

ATTACK OF THE DEMONS is a love letter to the movies of Fulci, Argento, and body horror classics like THE THING.

If Attack of the Demons has a drawback, it is the languid pace of the story. It feels like it takes a long time for anything of note to happen as the audience is introduced to the characters and gets caught up with the events. Once the curse hits though, the visuals take over and more than compensate for a familiar, but light story.

Eric Power and writing partner Andreas Petersen have created a visually stunning animated movie, that has a lot of heart and love for the horror genre.

While Attack of the Demons may not hit on all cylinders, it’s a movie horror fans will definitely want to check out.

Keep an eye on Power and Petersen and their future projects. If Attack of the Demons is any indicator, we can look forward to great things from the duo in the near future. And you can check out more of Eric Power’s amazing work here.