Promising themes and romantic developments are pushed aside for a typical road adventure, rom-com in the disappointing zombedy “Eat Brains Love”. 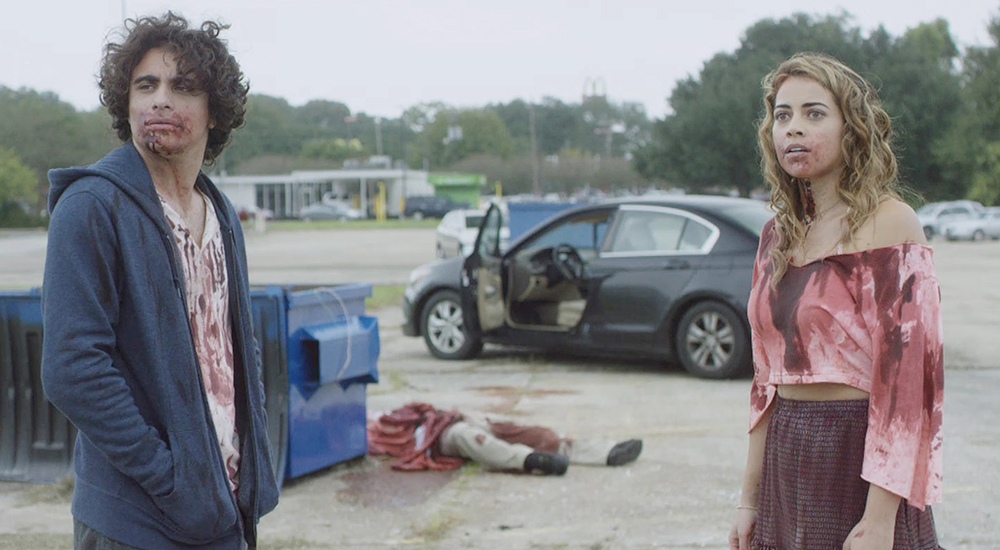 In Eat Brains Love, the zombie virus is transmitted via unprotected sex with an infected person, not through bites. The United States government has established an agency, Necrotic Control Division (NCD) to hunt down and kill the infected. The NCD recruits children with psychic powers to train them to hunt and locate the infected necrotics (the government does not refer to the infected as zombies).

After a night of unprotected sex, popular cheerleader Amanda (Angelique Rivera) and stoner Jake (Jake Cannavale) experience their first transformation into zombies in their high school cafeteria. They tear, chomp, and eat their way through their classmates. Once sated, both return to their human form.

Part of the infection is that the zombies are only in zombie mode under certain circumstances — heightened emotions like anger or sexual arousal, sudden adrenaline rush, and hunger. Once they’ve calmed down, the zombies return to their humanity, in a fashion.

The cafeteria slaughter attracts the attention of the NCD who send a team to investigate, led by psychic Cass (Sarah Yarkin).

They arrive at the high school in time to see Amanda and Jake trying to flee the area. Before the NCD agents can capture them, Amanda and Jake are captured by a pair of women who are there to rescue the new zombies.

The two women are Summer (Kym Jackson) and Grace (Kristin Daniel), who are also infected, but have learned to live with their new reality and blend in. Summer and Grace teach Amanda and Jake how to control their transformation by eating rodents and small animals to appease their hunger. But the animals are only a temporary fix, and soon their need for human flesh will take over.

Summer and Grace have a solution — they seek out sex offenders and pedophiles to feast upon.

During their stay with the women, Amanda and Jake begin to grow closer and learn about a potential cure for the virus in Iowa. Meanwhile, Cass continues her search for the zombie pair.

Cass’ psychic connections with Jake make her empathize with the infected, and she begins to develop romantic feelings for Jake. As her feelings grow, she starts to sabotage the search for the pair, leading to the arrival of an NCD supervisor, Alastaire (Patrick Fabian).

Unfortunately, the NCD is not just terminating the infected for the safety of Americans. 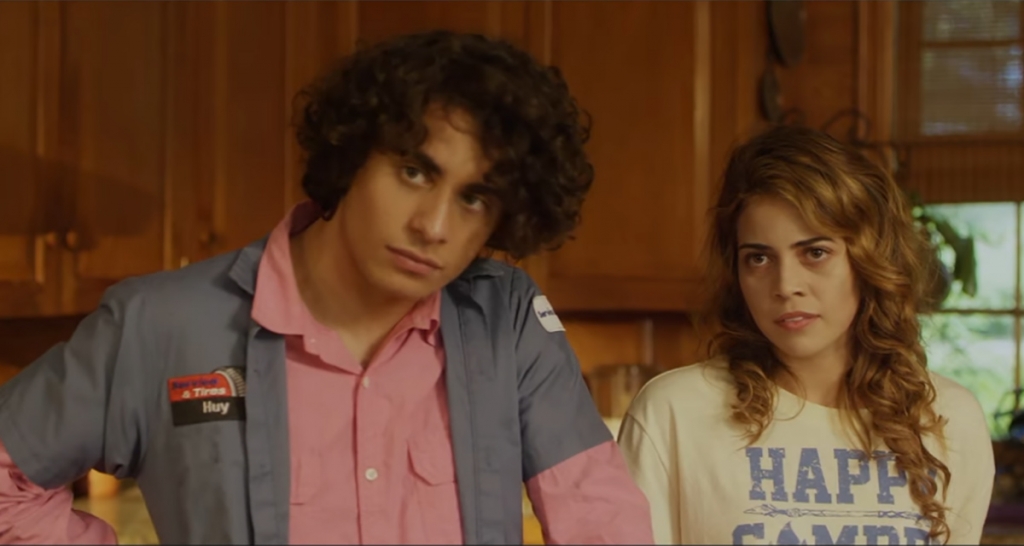 They have nefarious plans to turn the necrotics into slaves for the psychics. And Alastaire is determined to find Amanda and Jake to experiment on them, while Cass does her best to keep them safe from capture.

The role of Alastaire in this story is to be a bit of a moustache-twirling villain, which he certainly is. His plan to enslave the necrotics and use them as military weapons or personal servants is dastardly.

The movie dips its toe into a deeper theme when Alastaire explains that people were afraid of psychics before the necrotics came along. He asks Cass, “Who will humans turn their fear against if the necrotics are exterminated?”

This is an intriguing question to raise, but it is never really followed up on as the movie quickly returns to a stoner romantic comedy.

Ultimately, there is not a deep story in Eat Brains Love.

Though it does sometimes lightly touch on deeper thematic issues, it quickly brushes those aside for the quirky romance and comedy. And that’s made more problematic by the fact that the romance elements of the story tend to fall flat.

Amanda and Jake build a superficial relationship that seems built more on their shared infection than any actual feelings. Jake objectifies Amanda as the hard-to-obtain head cheerleader, and Amanda views Jake as available at the moment. Amanda seems to be more intrigued by Jake’s fantasies about her rather than any growing feelings of love.

And the growing infatuation for Jake by Cass is flimsy, at best.

Cass, through this investigation, begins to learn that there is more to the necrotics than being mindless cannibals. She seems to make a connection that Jake is someone who would have liked her in high school, if she had gone to high school and not been in training for the NCD. The pieces don’t quite fit together to believe Cass would begin to fall in love with Jake. If she had instead learned to empathize with the infected rather than view them as targets, Cass’ arc would have been easier to digest, so to speak.

Eat Brains Love never aspires to something greater than a romantic comedy with zombies.

Even though it touches upon issues ranging from racism, government intrusion, even vigilantism, the movie is never elevated a level to respond to these issues. The romance falls flat because there’s nothing happening between Amanda, Jake, and Cass that’s not superficial.

However, the comedy lands more often than not, and the gore/special effects are outstanding.

One gag that stands out is when Amanda, during her first zombie transformation, rips the arm off a classmate and uses it as a chalice to chug the blood pouring out of the severed arm.

If there had been as much attention given to the story and character development, as was given to the special effects and comedy, Eat Brains Love might have been a new zombie comedy classic. As it stands, it’s just a bland romance that is a less realized vision of the zombie genre than the television series iZombie or the movie Warm Bodies.