“Super Dark Times” and “Dark Was the Night”

Posted by:
Tags:  Dark Was the Night Super Dark Times

This week, we find out what’s scarier…teenage boys or a bloodthirsty beat; Join us as we check out Super Dark Times and Dark Was the Night.

In this week’s Cine-Files, things get dark…in more ways than one. As a reminder, The Cine-Files is a weekly film journal where I review and rate the movies I’m watching on a color scale, inspired by my love of Sour Patch Kids candy — green for the worst films, orange for average films, red for the great films, and blue for the absolute best of the best.

Sadly, this week’s “Dark” double feature was mediocre at best, with a heavily hyped disappointment and a creature feature that failed to deliver on its promise.

I think I missed the point with this one.  Either that, or my usually extremely low standards suddenly got too high!  This film has been compared to River’s Edge, which I can understand, I guess.  They are very similar, and one could probably mash the two together for a depressive “the-kids-are-NOT-alright” double feature.  The only problem with that would be putting anything next to River’s Edge.  There will never be another River’s Edge, and if you don’t know what I’m talking about, get out there and see it!

This started out exceptionally well.  A quiet and cringe-inducingly accurate portrait of a seemingly unbreakable friendship between two middle schoolers is suddenly threatened by a bag of marijuana and irresponsible samurai sword swinging.  The kids in the movie behave in a manner that is even rawer than the acclaimed ensemble cast of It.

It had “yo mamma” and big dick jokes, yes, but the kids in Super Dark Times take it to the next level.  We’re talking Clerks-level gutter talk.  The only reason I bring this up is to compliment the film on its accurate portrayal of what growing up is really like.  Sometimes we forget what we were like at that age when adults weren’t around.

So as this impressively accurate portrait of American boyhood moves along, I was eventually very let down when it became just another suspense thriller.  It didn’t work for me at all. 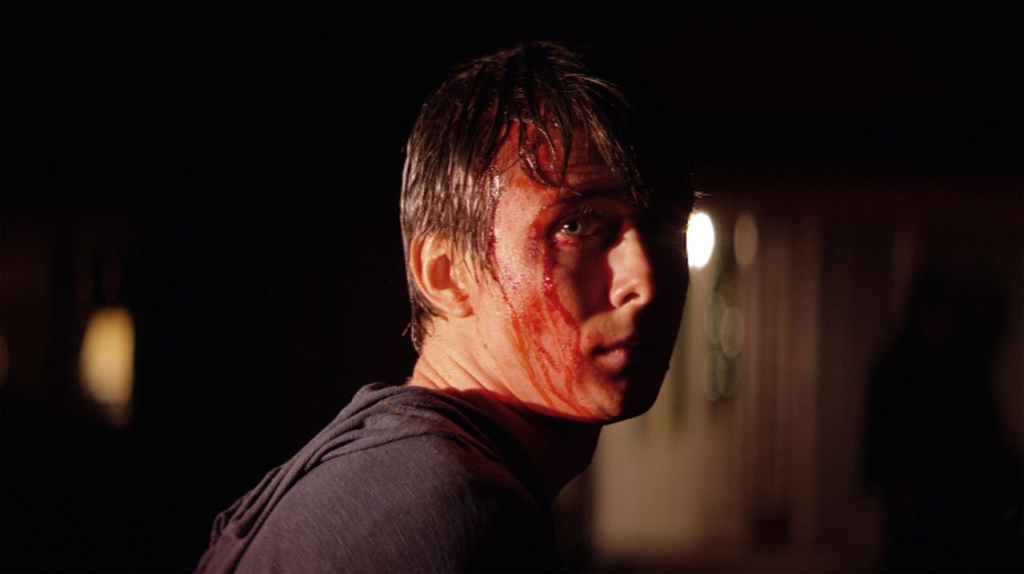 The first half is so fucking honest and real, but it all just sinks into “stop the Columbine crazy kid before he kills the pretty girl” territory.  However, the ending face-off between the ex-friends was effectively played out and the whole thing ended satisfactorily, so I can’t be too mercilessly cross with it.

I was just so pleasantly surprised by the freshness of the first half that, when it dialed itself down to fit a more common and digestible formula, I was very disappointed. 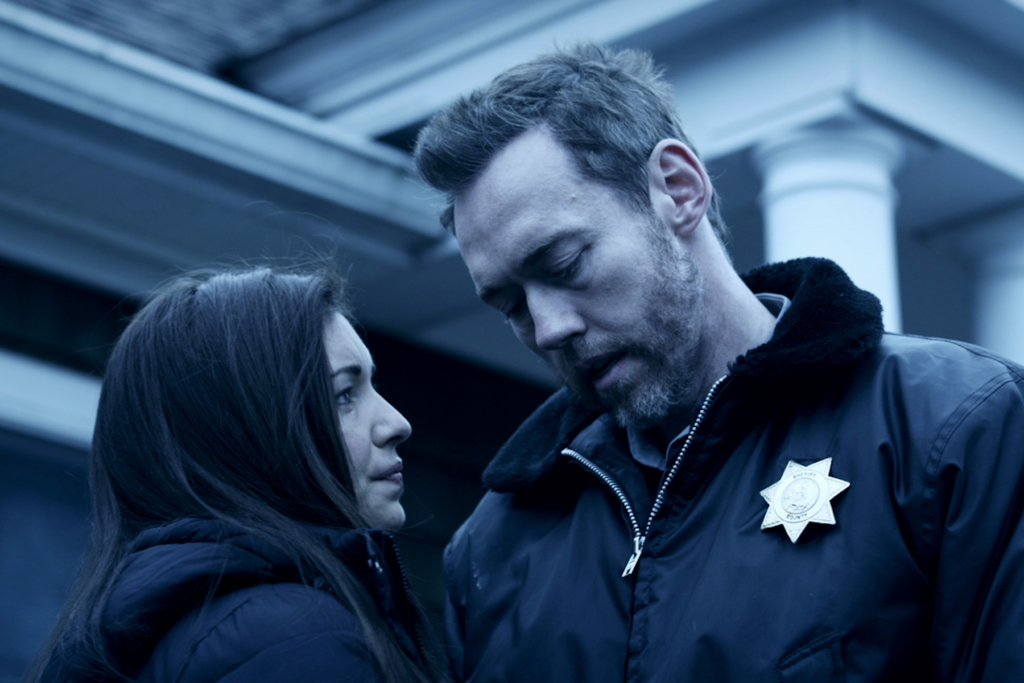 Scratched was my DVD rental.  Like a Resident Evil boss the creature looked like.  Ok, I’ll stop there.  I was in the mood for a popcorn-popper, and this sufficiently served that purpose.  It had a beautiful snowy small-town setting, and the sheriff in charge of everybody’s problems (they really needed to cut him a break) was very steadfast and likable.

He had the requisite tragedy in his past that estranged him from his wife, but he was a good father.  Though terrible with French toast.  And the scene with the boy’s principal (after the kid got the whole class saying “pecker”) was genuinely funny.

After a prologue that I literally predicted shot-for-shot, an ancient creature is awakened in the woods and begins feasting on neighborhood pets.  The entire town is covered overnight in hoof-like black footprints, and the citizens who have been around long enough know about a secret evil force that was apparently disturbed by a logging company. 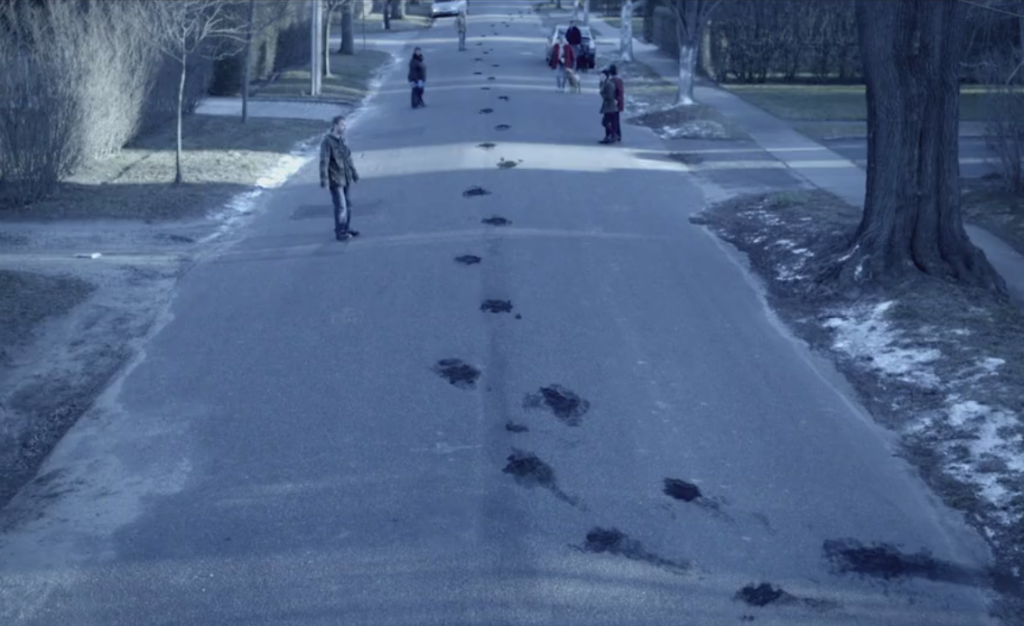 And so off we go with our sheriff to investigate the monster mystery, deal with ignorant townie drunks, and make everything all better again with his wife.

I would have enjoyed this a lot more if there was more gore.  And if they showed the monster for more than just a few seconds near the end.  When the fuck will filmmakers figure it out?  Yeah, they’re well-versed enough in the horror cinema language to set up all the standard tropes and clichés, yet they don’t know enough about the genre to understand that we need more monster!  We need more gore!  Well, I need it, anyway.

The monster is mostly CGI, and looks like a Resident Evil creature that jumped right out of a Playstation 2 console, so maybe not seeing it much was a good thing. 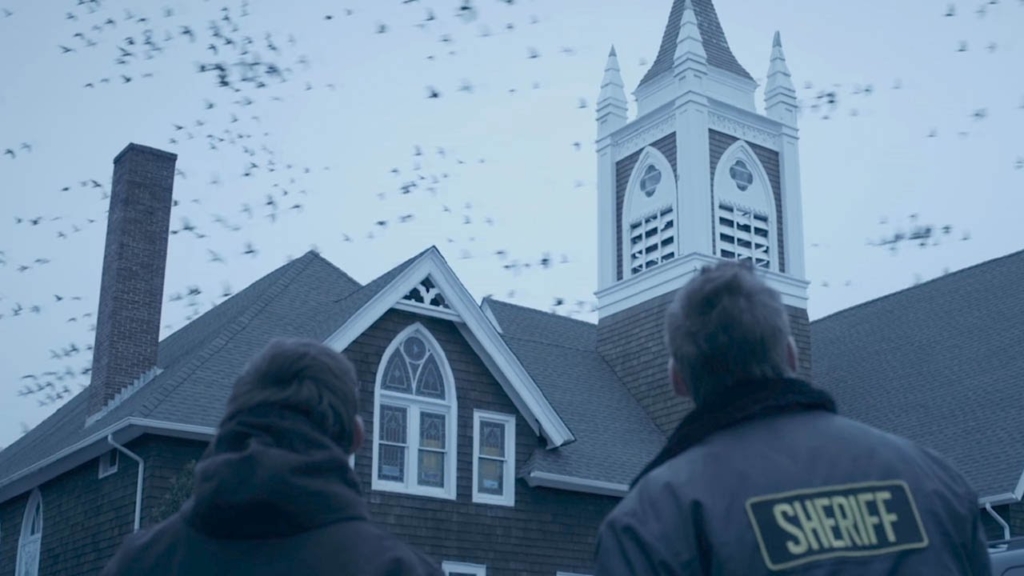 But the worst offense this film committed was the twist ending.  Yes, I know, another one.  But it was a good one!  I literally fist-punched the air and said, “YES!!  Now it’s gonna get fucking nuts!”  Then it ended.  Ugh.  Oh well.  There are worse ways to spend a late night.