Though not mind blowing, fans of real life ghost stories and paranormal creepiness may want to take the short, scenic ride with “Clinton Road”.

If Clinton Road (directed by Richard Grieco and Steve Stanulis) is any indication, there needs to be another “rule” added to the list: When Ice-T in a pinstripe suit tells you not to go somewhere, do not go there (“that shit is dark”).

Just imagine the trouble you might soon be facing if you ignored the warnings of the toughest lemonade stand gangsta ever. In this film, you would be fated to wandering lost in a time-warped forest. You would do this while running from a sledgehammer-killer with goggles, a little girl ghost, the ghost of a drowned boy who likes to play with coins, a seamonster, and a 10 o’clock-shadowed police officer / harbinger of doom.

One little hiccup I want to bring up is how difficult it was to make heads or tails of the multiple threats the movie throws at our hapless young and attractive victims. This comes down to the following question:

Since there are so many spookies roaming around in the woods (“Stay on the road!” the harbinger cop warns), and the film is a tight and concentrated 77 minutes, there isn’t much time to cover ghost origin stories. So they get a pass on that one. 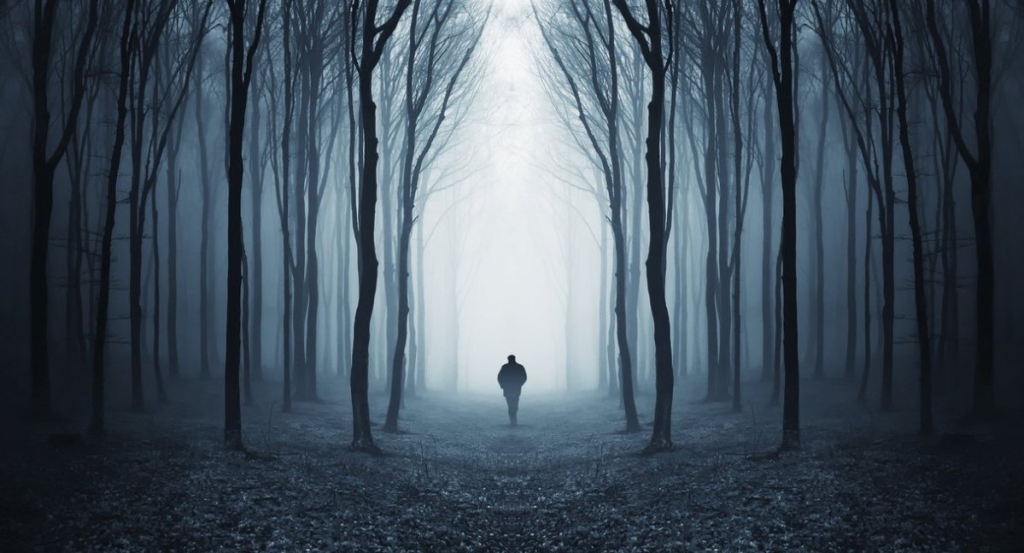 In real life, this film is based on the lore that surrounds the Clinton Road of West Milford, New Jersey.

A smorgasboard of urban legends and paranormal events have been born there, including ghost sightings, aliens, Satanic sacrifices, and (most horrifying) Ku Klux Klan activity.

Now, the best ghost stories are almost always sad and about children. So the filmmakers also missed the mark with a side story that deserved much more attention.

In the movie, there are coins lining the railing of a small bridge. Two of our victims take some of the coins and toss them into the body of water under the bridge. The coins are thrown back up at them. Very cool stuff. Little ghostly stings like that really give the fear some extra density. It isn’t really explained in the movie, but this is a phenomenon rumored to really happen in the woods off Clinton Road.

The story has a standard horror setup.

A girl is being chased in the woods, and eventually gets caught and killed by the steampunk hammerman. Kudos to this young lady, because she sold the frantic running, screaming, and wheezing perfectly. Some time later, the husband and sister of this girl gather some friends together and venture into the woods to find her. Or answers. Or maybe their own ghastly deaths.

Guess what they find?

The main two characters, distraught husband Michael (Ace Young) and sister Gianna (Erin O’Brien) have a complicated friendship, and there is a subtle romantic tension that everyone seems to sense (or admit to) but them. Along with them, they bring total fucking asshole Tyler (Cody Calafiore). But most interestingly, they hire a medium named Begory, played by James DeBello. He has an odd facial scar and a damaged eye. And I have to say, just little details like that can make a character even more interesting.

Once in the woods they shouldn’t be in, Begory terrifies them by falling victim to a massive seizure and insisting the place is evil. He calls out the evil in order to do battle with it, as the rest manage to become separated in some of the worst decisions ever made by movie characters. I won’t judge, because it’s actually quite fun — especially for horror aficionados who are familiar with the trappings.

As the movie winds down, things begin to go extremely wrong for our platoon of murder meat. Time and reality drift in strange and dreamy ways.

I have a love and respect for all horror films and horror filmmakers.

I am a firm believer there’s no such thing as useless art, and someone out there loves this film. It was very interesting to see what Richard Grieco could do with a horror movie. And there are many positives, which I’ll briefly focus on here. I will let future viewers find the flaws; they won’t need much help to do so.

First of all, it is beautifully lit. And the wooded locations are really creepy. The interplay between the characters is a bit unexpected. And while asshole Tyler may be an asshole, he doesn’t bust a move on his best friend’s girl. The lead character Michael is played very well. He is determined and scared for his missing wife, but not over-the-top spewing panic all over everybody.

Overall, though not anything special (and unfortunately not very gory), if you’re in the mood for a “true” ghost story and some well-filmed outdoor scenery, give this one a shot.