“Consume” is a gripping and all-too-relatable tale of terror from the perspective of a troubled teen girl driven by self-doubt and obsession. 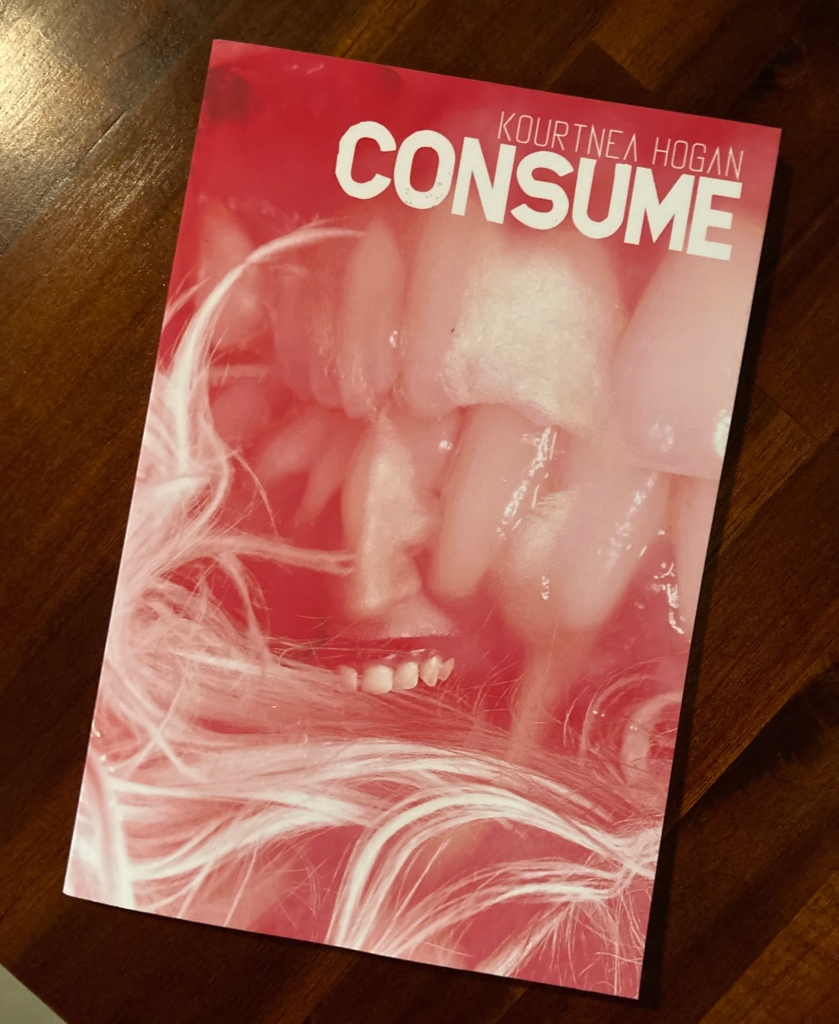 Typically, Frights and Feelings is a venue that explores the emotional resonance of horror films. But for this edition, I wanted to switch things up a little and spotlight an independent horror novella that encompasses the tenants of this column.

Emotional horror isn’t bound to one certain medium, and Kourtnea Hogan’s Consume is proof of this.

While reading Consume, I was transported back to those adolescent days when I would have given anything to be anyone but myself. I remembered the lonely nights spent crying, the bullying, the anxiety, and all the other nastiness that came with being a teenage girl. Hogan depicts the teenage experience with sympathy and a killer body horror twist that will leave the audience squirming.

Consume follows the story of awkward 13-year-old Tegan as she struggles to fit in with her peers. When Tegan strikes up a friendship with the popular and pretty Rileigh, she gives into her intrusive thoughts and starts to compulsively eat Rileigh’s hair when she can. This hair comes from several places, including Rileigh’s hair brush and the bathroom drain.

Tegan wants to become more like Rileigh, who is bubbly, likable, thin, and conventionally pretty.

As a result, Tegan becomes more obsessed with her weight and develops an eating disorder. Over the course of a year, Tegan’s life spirals out of control, and she can barely contain what is growing deep within her. Many of us have experiences like her or adjacent to hers.

In my case, I was a 13-year-old taking antidepressant pills to cope with my daily life. Granted, my mother hadn’t passed away like in Tegan’s case, but I was struggling and needed medication to help me in my day-to-day life. I suffered from scary intrusive thoughts, too. I didn’t know how to deal with those other than be terrified of them.

So much of Tegan’s experience is universal, making it so melancholy and affecting. We’ve all been Tegan or knew a girl like Tegan.

Hogan captures what makes adolescence such a singularly difficult time in everyone’s life. There’s a pressure there that threatens to crush us all while we’re working day in and day out trying to form ourselves. Tegan is buckling under the strains of being a teenager in a society that demonizes you no matter what you do.

Pre-teen and teen girls often worry about their weight and, by extension, their desirability. Society teaches us that as women form, our worth is attached to our bodies and attractiveness. A pretty face and a rail-thin body are largely considered a woman’s social currency within a suffocating patriarchal framework. This causes Tegan to turn to self-induced vomiting as a way to control her outward appearance and lose weight.

Tegan’s desire for thinness and acceptance is a reality for many young girls. To make matters worse, Tegan does receive the attention and the acceptance she craves when she loses weight, negatively reinforcing her self-destructive behaviors.

To compound Tegan’s issues with food and appearance, she has to deal with her trichophagia, the compulsive desire to eat hair. 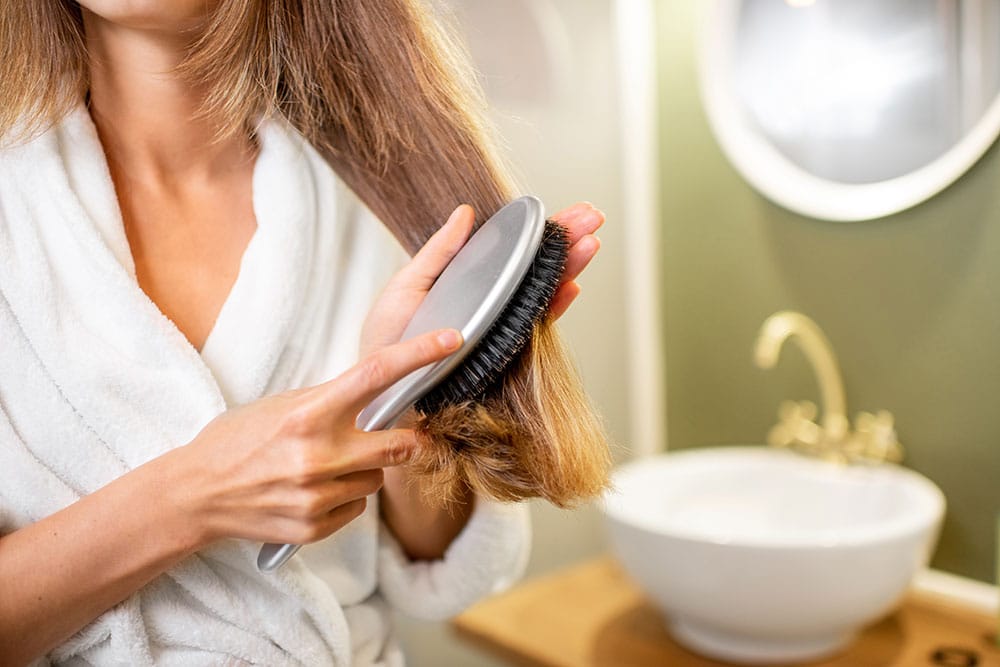 She exclusively imbibes her friend Rileigh’s hair as a way to embody some of Rileigh’s essence so that she may become like her, become seemingly perfect. This compulsion devolves into what is known as Rapunzel syndrome, which further feeds into the body horror aspects of the story. Rapunzel syndrome is exceedingly rare. Essentially, it’s when a person with trichophagia has a hairball in their stomach with a “tail” that threads throughout their intestines. If not treated, this can be fatal.

The ball of hair that is growing within Tegan’s stomach is akin to her welling feelings of inadequacy and her desire to be included.

She’s pushed down her feelings — consumed them with Rileigh’s hair. And her feelings, like the consumed hair, begin to grow and fester and threaten to become uncontrollable.

Hogan thoroughly explores the metaphorical hell of teenage girlhood. When Rileigh takes a liking to a boy, she encourages Tegan to date the boy’s friend Bailey. Despite Tegan telling Rileigh that she doesn’t feel sexual or romantic urges toward anyone, she still pushes Tegan to date due to Rileigh’s parents wanting the teens to go on group dates as a means to deter any mischief.

Bailey is brutish and possessive, and the relationship that forms between them is toxic.

Tegan’s devotion to Rileigh clashes with her disdain for Bailey, who abuses and blackmails her. Tegan experiences both sexual violence and physical violence in her relationship. Again, statistics show that this is a dire reality for many teens.

The Center for Disease Control posits that 1 in 12 high school students experience physical or sexual violence while dating.

Tegan embodies the nuanced and multifaceted issues that plague many real-life teens, in addition to struggling with depression, bulimia, and trichophagia. 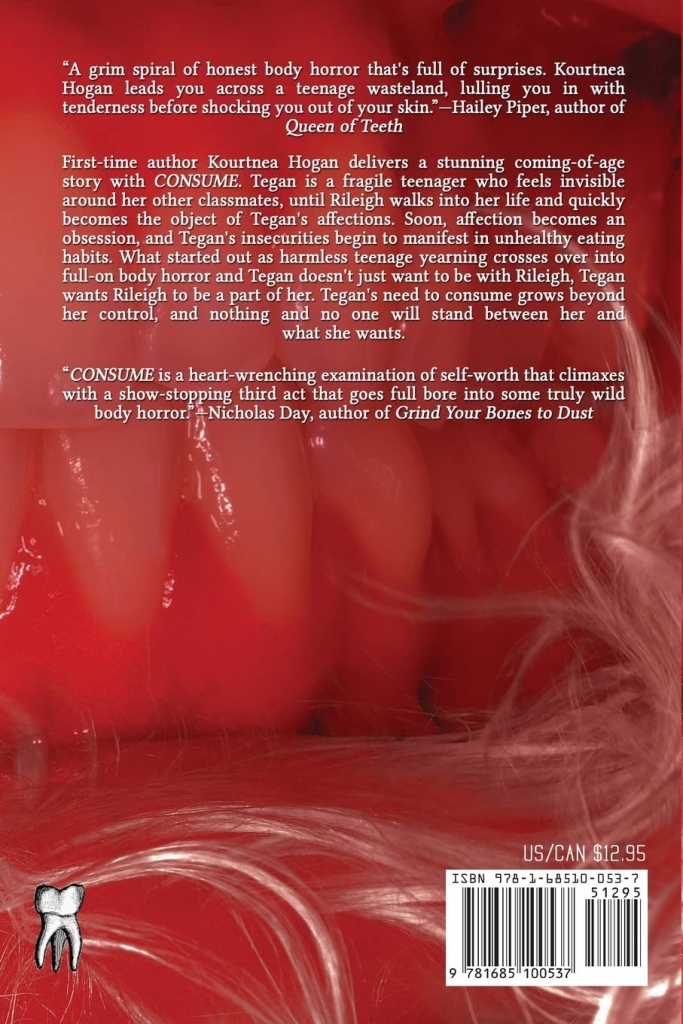 While we might not have to battle against supernatural forces or deal with fantastical and grotesque body horror, we are often subjected to heartache and serious traumatic events that leave us all forever changed.

Teen girls are navigating a world that seeks to devour them whole and hold them hostage in the belly of the beast that will destroy them again and again.

Naturally, I have withheld many plot points within Consume to preserve the surprises that Hogan has in store. But if you want an emotionally affecting horror story that is paired with stomach-churning body horror, this is a novella for you.

Fans of Jennifer’s Body and Julia Ducournau (Raw, Titane) should definitely seek out this terrifying and tender tale.

Make sure to pick up a copy of Consume here, here, or here and support more independent horror presses and authors!