A heartwarming and heartbreaking documentary about the power of art and the strength of the human spirit, “Me To Play” is a revelation. 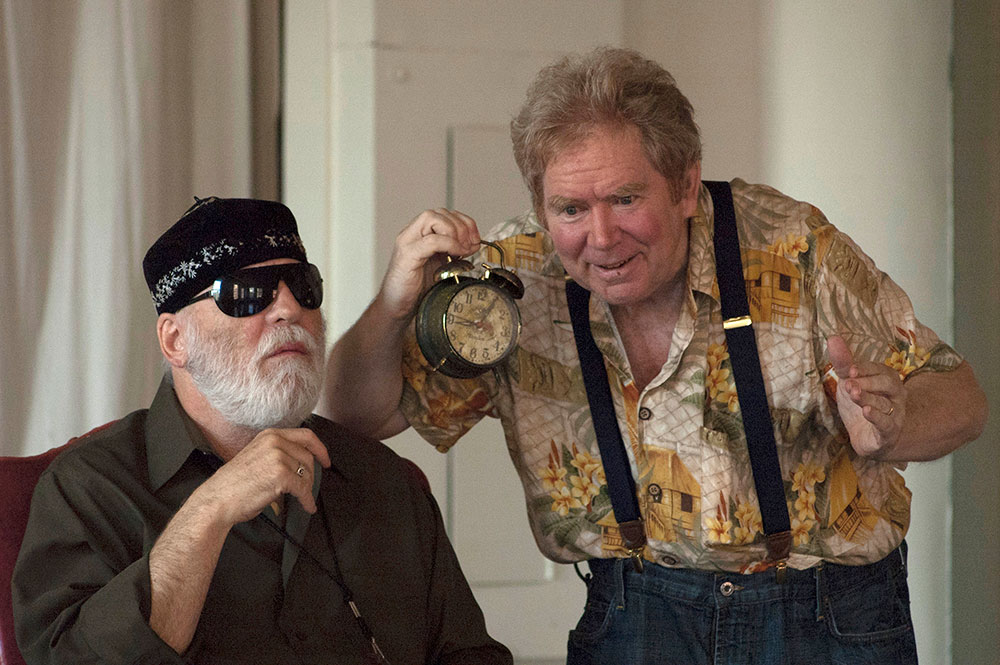 “Nothing is funnier than unhappieness.” – Samuel Beckett, Endgame

I need to preface the following with a word of caution and an apology.

Film reviews are meant to be as objective as possible. It’s not about the reviewer but the work of art being reviewed. You’re here because you want to know if this film is worth watching. In this instance, however, I find it impossible to separate my deep appreciation for the film from my personal perspective and how it resonated with me on a very deep and meaningful level.

Thus, this article will be part review and part editorial. Given how personal this documentary film is, that feels appropriate.

I’ve always struggled to plan, which, as you can imagine, has often been to my detriment. But life taught me early on that I should never rely on any promise of tomorrow. Everything can and would change in the blink of an eye.

Survival meant being able to roll with the punches and expect the unexpected.

To cope with my anxiety, I learned to focus squarely on the here and now. What could I control at the moment? Forget the next five years; what mattered in the next five minutes?

Having recently endured the life-altering rollercoaster ride of the past couple of years, one that we all rode together, I was grateful for this “here and now” mindset. “I have one rule; never think about the future.” – John Christopher Jones, Me To Play

It reinforced my lifelong understanding that we have no idea what tomorrow will bring. We have to be ready for anything. The good, the bad, and the grotesque.

There’s a film I love, Joachim Trier’s heartbreakingly beautiful The Worst Person in the World.

There are so many moments and lines of dialogue with the power to destroy you. But the one that hit hardest for me was when our heroine, Julie, utters this phrase:

“I wasted so much time worrying about what could go wrong, But what did go wrong was never the things I worried about.”

As much chaos as life has thrown my way, only one thing has ever been constant. And it’s this one thing that has been my anchor in the most turbulent seas and buoyed me when life’s undertow threatened to pull me under.

That one thing is art.

I’m not an actor like the two leads in Me To Play, but I am a creative person, an artist. The ability to create is everything to me. It’s my livelihood, my passion, my therapy, my identity. It’s core to everything I am.

What if one day I couldn’t write, I couldn’t make art, I couldn’t do the things that give my life meaning? What would I do then? Who would I even be?

As much as I tell myself I can handle whatever curveball life has in store for me, it’s always with the caveat that I retain my main coping mechanism. Without my ability to make art, I am lost. It’s like trying to navigate troubled waters without a paddle.

It’s a feeling of hopelessness I hope never to experience.

Thus, 20 minutes into Me To Play, I was already invested, captivated, and emotionally wrecked.

They undertake an act of bravery as their swan song to the decades-long artistic and professional lives they’ve led — putting up an Off-Broadway production of Samuel Beckett’s comic but difficult masterpiece, “Endgame,” the play he wrote after caring for his mother as she died from the very same disease.

These talented actors are at the top of their craft one minute, acting alongside legends like Woody Allen and Helen Mirren. In the next minute, everything they trade on as professional actors slowly disintegrates: speech, memory, stamina, and physicality.

They know that the disease they are battling will eventually take their lives, and it’s already taken their careers. But they decide not to go down with a fight.

So, they contact the Beckett estate and got permission to perform one live performance of “Endgame” in New York.

Directed by Jim Bernfield, Me To Play follows their journey as they struggle to overcome every possible obstacle and go out in a blaze of glory.

But the journey to bring Beckett’s brilliance to the stage is only a small part of the story. 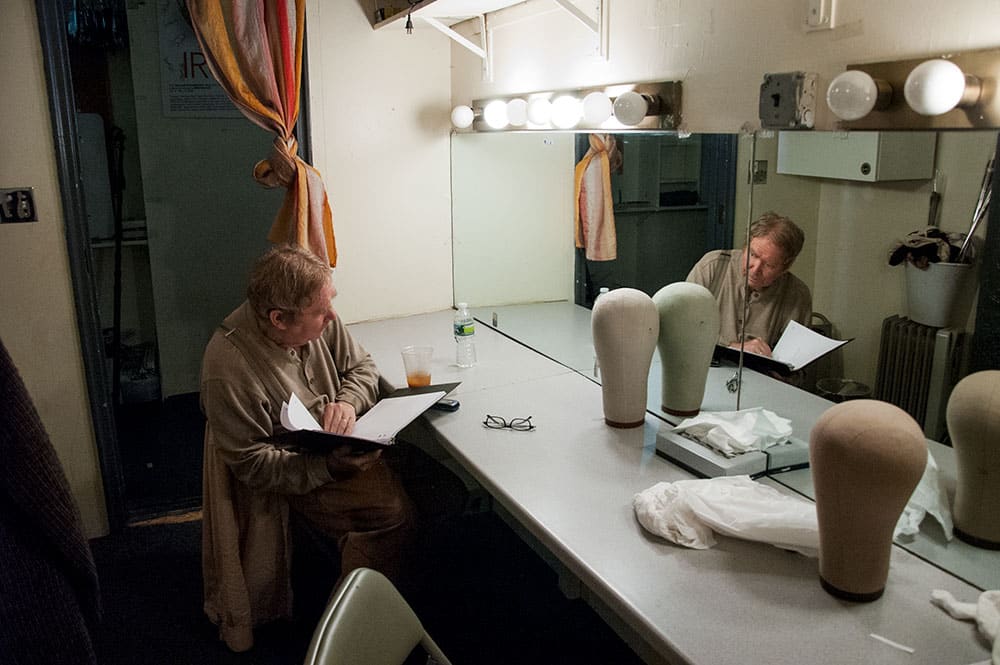 “You’re on Earth. There’s no cure for that.” – John Christopher Jones, Me To Play

At its core, the film is a potent “pull no punches” look at the devastating impact of the disease.

We get an up-close-and-personal look at how it affects Dan and Chris, as well as their loved ones.

In some of the film’s most powerful moments, we hear from their wives, each of whom is a pillar of strength and unyielding devotion. But they both recognize that the hands they’ve been dealt are miserable.

They see their husbands at their worst. They have been forced to watch as the strong, brilliant, gregarious men they fell in love with have become nothing but shells of their former selves. They have gone from lovers to caregivers. They struggle with guilt over feeling sorry for themselves as the men they love wither away.

In one scene, Dan’s wife wistfully says, “I try not to imagine a future.” A few simple words reveal a cavernous depth of despair.

It’s so unflinchingly real and relatable. And it’s impossible not to feel the deepest pangs of sympathy for those faced with a circumstance that, as Dan exclaims while weeping, is just so damn unfair.

But nothing will devastate you as much as listening to Dan and Chris describe their battle in their own words. 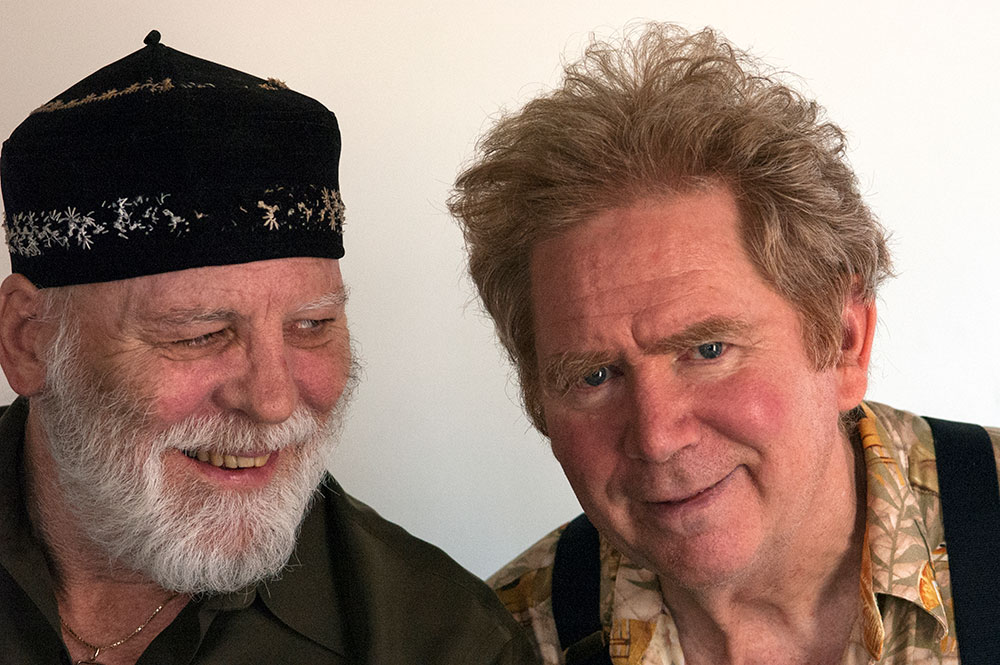 “What do they do while they’re waiting for the end? They perform.” – Dan Moran, Me To Play

We hear what it’s been like to lose themselves to this merciless invader of their bodies and minds.

When Dan tearfully says, “I’m just not here,” I felt gutted. When he talks about the pain of walking away from acting because he can no longer be effective at his craft, he says, “I’ve lost that sense of identity.” And my heart is shattered.

It’s terrifying to have so much of who you are wrapped up in what you do. But it’s true for so many of us, whether we make art or not. Our sense of identity is so fully integrated into what we do for a living and how we carve out our place in the world.

To be told, “You’ll never do that again; you’ll never be that again,” it’s unthinkable. I imagine it must come with a terrible weight of hopelessness and a lack of purpose that makes life nigh unbearable.

During a doctor’s visit, Chris’ wife begs the doctor to put some quantifiable number on their suffering. How long do they have until the next shoe drops? Will it be five years? Five months? She’s frustrated because it’s not the first time she’s asked and failed to get the response she wants.

But the doctor insists, “You can’t dwell on how much more time you have at this level of function. It’s totally unpredictable.” It’s a deeply unsatisfying response. But it’s the only honest one he has to give.

At one point, Chris — aware of how rapidly his body is deteriorating — says, “It’s a little less easy to be optimistic than it used to be.” I defy you to walk away from that unshaken.

At times, it’s tense and unsettling to watch these gifted performers preparing for a performance they’re not sure they can give. 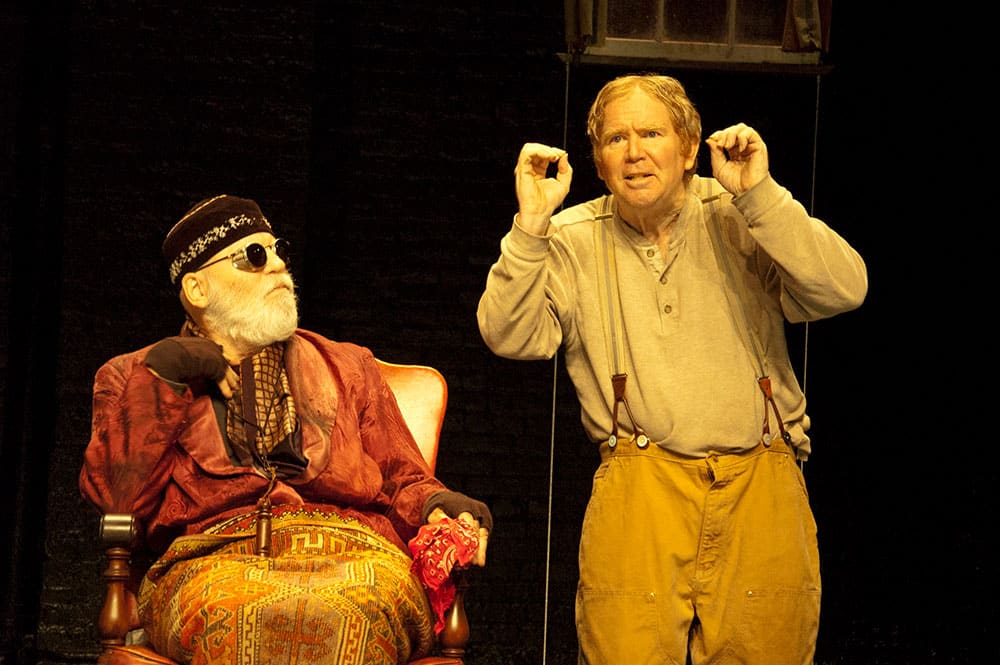 They fail to remember their lines, battling constant fear and anxiety that they will disappoint everyone — especially themselves.

Something that once came so naturally, like breathing, now feels like a nearly insurmountable mountain to climb.

As artists, we often battle insecurities, doubts, and fears of imposter syndrome on our best days. With talent, accolades, skill, and a finely-honed control of our craft, we still worry about not being good enough.

Maybe it’s the subjective nature of our craft or the fact that we pour so much of our souls into our art, making it impossible for it not to feel personal. But I’ve never met a fellow creative who wasn’t insecure and neurotic as hell.

I watched as Dan and Chris battled their inner demons and fear of falling on their face in front of a packed audience, knowing it wasn’t just normal artistic insecurity but a very real possibility. They knew it, too.

They knew there was a good chance they would fail spectacularly. And that kind of fear would cripple the best of us.

Would it all be ok in the end? I honestly didn’t know. And to be fair, what did “ok” even look like?

Unlike most fiction films I watch, I couldn’t begin to predict the ending, which made it all the more riveting.

Me To Play is a love letter to art and a testament to the power of art to elevate us beyond our brief, often bleak journey around the sun.

There’s a beautiful scene in the film when it all feels to be unraveling, and the play’s director gives a pep talk. He says, “This is a play about overcoming, not about caving.”

It’s the entire summation of Beckett’s “Endgame” summarized so eloquently by Dan:

It’s this idea that the human spirit can be beaten, bloodied, and bruised. But it cannot be killed or contained. When the body fails us, and the mind falters, the soul endures. We may suffer greatly and feel like there is no hope, but something inside us keeps burning, the eternal flame that cannot be extinguished until we take our last breath.

Me To Play has screened at over 30 festival events, including its Slamdance premiere. where MovieMaker Magazine called it their “favorite film at Slamdance.” It’s not hard to understand why.

It’s at once thought-provoking, heartbreaking, life-affirming, tragic, hopeful, inspiring, and deeply moving. It can be a gut-wrenching watch, but it’s also a spectacularly beautiful experience.

Me To Play is now streaming exclusively on Fandor.